A number of years ago a friend gave me a collection of Unitron parts that his father used in his surveying business that he had back in the 70's  So I have a couple  114 mounts but no  tripods. He used the mount on metal tripods and mounted a laser on them.

In the classified last week there was  an ad for  an Unitron 114 tripod that was stated to be  made in the 50's and was not in the greatest of shape. I made a deal with the seller. When it arrived it was in better shaped then described.  A couple of areas needed some 80 grit sand paper to clean up  some rough areas and  all the pieces were lightly sanded. I then applied a single coat of amber shellac followed by a number of coats of semi gloss lacquer from a spray can.  The metal tip were removed and sprayed semi-gloss black and the other metal pieces polished up with steel wool.

The tripod is the older style that did  not have the spreader to stop the legs from spreading apart on their  own and possibly causing  the scope to fall over so I added  eyelet bolts and chains to limit the spread of the legs.

The mount was missing the thread metal bushing, and threaded slow motion rods so I machined new bushing from some aluminum rod and used some 6-32 all thread for the rods.

Next I need to repaint the mount. I think I might make a light weight 3" Schiefspeigler to use with it. 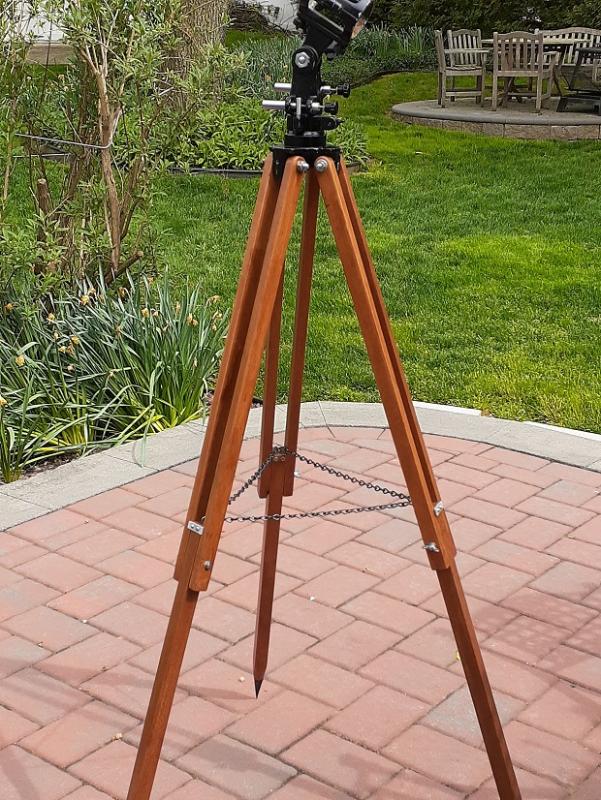 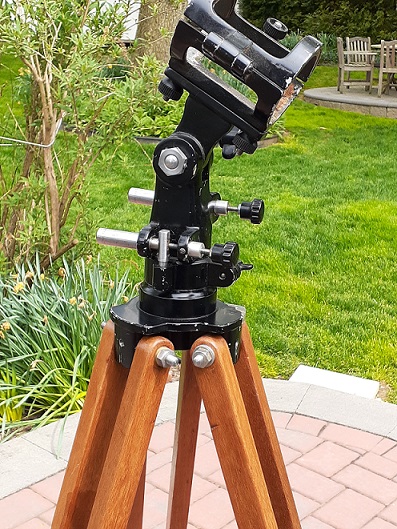 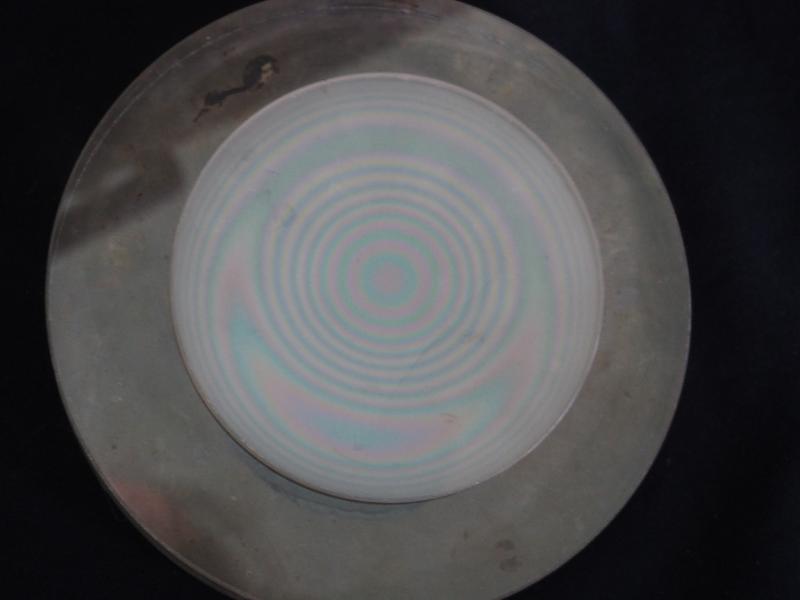 I'm having another go at figuring a corrector for my B&L4000 this time from white B270 float glass instead of the green stuff. The existing one is destined for another CN member whose scope arrived with a broken plate.

In the pic a surface has been polished for 80minutes with both sides showing around 6 fringes asphericity each. Each side seems a little non concentric but luckily with the long axes at 90* to each other.

I hold the glass surface to a spinning button lap of 55 pitch whilst pushing it to and fro and will carry on until all pits have been polished out. I expect the asphericity to deepen just a little more and then stop. Eventually the .7 radius zone should be around a dozen fringes deep on both sides.

Great news David, I'm glad to see the little B&L hasn't beaten you yet. You should revive the old thread

Great news David, I'm glad to see the little B&L hasn't beaten you yet. You should revive the old thread

Thanks. Whilst I'm pleased with the 1st corrector which eventually was coaxed into giving good performance I wanted to try out some, I hope, better figuring technique. Maybe get it AR coated.

The present one pretty well does what I'd expect; splitting E Lyrae, Cassini div etc and the moon at x300 now and then. It's just bettered by a good 3'' F/15 achromat in contrast which, again, isn't a surprise. Hopefully it'll match the new scope's mirrors.

I replaced the 2" adapter in my AP 6"f9 focuser. Sounds trivial, right?

The scope originally came with a temporary Jaegers focuser, and a replacement 1st generation 2.7" focuser was sent a few months later. It may, in fact, be one of the very first. The 2" adapter it came with is bare aluminum, has an oversized bore, and a single thumbscrew. As a result, there is about 3' of image shift as the diagonal or eyepiece wobbles on that pivot point.

So, I thought I would just order one of the current AP adapters for their 2.7" focusers, which has three thumbscrews and a compression band. But it doesn't fit because, as AP explained, their early 2.7" focusers were not as "standardized" as later models. I take that to mean they were still figuring things out. The new adapter went in about 1.5 turns, so it's just a bit off. Asking AP if they could help, they basically said that nothing could be done, short of custom machining a new focuser tube.

With nothing to lose, I took a set of needle files to the threads of the new adapter, removing the anodizing. Then I clamped the tube in my wood bench vise and started running the adapter in and out, with a little machine oil, touching up and cleaning the threads, until it went all the way in just with moderate resistance at the end. It's not pretty (when it's not mounted), but it solves the problem of the image shift.

The experience leads me to think that perhaps AP first sized their focuser threads to fit the bare aluminum adapter, and when they started anodizing a new batch of adapters and found they wouldn't fit, found it easier to adjust the "standard" for the focuser tube thread.

Here's why I don't use my Questar much at The Swamp:  The black painted circle that serves as the secondary mirror spot's baffle has a thin slivered arc that's come off.  I guess after 63 years that's a minor issue.  Anywho, I asked about repainting it over on the Questar Forum; but, any of you other Old Questar owners seen this happen??

I would probably just ask Questar if they would sell you the appropriate size machined baffle and just silicon it over the paint.

Here's why I don't use my Questar much at The Swamp:  The black painted circle that serves as the secondary mirror spot's baffle has a thin slivered arc that's come off.  I guess after 63 years that's a minor issue.  Anywho, I asked about repainting it over on the Questar Forum; but, any of you other Old Questar owners seen this happen??

Made riser blocks for the Edmund 4", so that the bolts don't have to go through the dovetail, which provides some flexibility in positioning. Got them all made and they were not even. It turned out that the bolts aren't parallel. Some fussing and enlarging the bolt holes got them close enough. I also made thicker spacers for the objective, to see if that improves the over-correction I was seeing in the star test. Cleaned the prism, and blackened the inside of the extension tube and the prism barrel. Hopefully that takes care of the haze I was seeing. The air was really unsteady today, so my usual daytime test targets were just dancing impressionist paintings. Forecast has cloud cover increasing to 65% around sunset, but maybe I'll be able to squeeze in a star test. Tuesday night is the next chance at clearing. 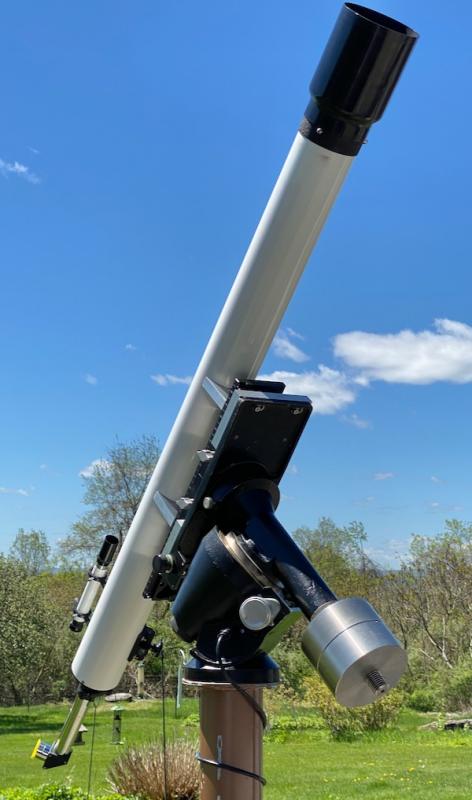 The rental cement mixer is coming tomorrow, and I'm planning to pour the extension to the pier in the observatory over the weekend.

They were wrong about the 65%. It was 100% overcast by 8:30. We seem to be in a pattern of mostly sunny days and overnight showers.

installed a dual vixen/losmandy adapter on one of my mounts.  will be much easier to play with my scopes now.