What did you work on today?

I bought a green LED light to make a fringe box.

Edit:  after testing, it works with a few LEDs flickering, I hope that doesn't effect the function.  Worst case I'll have to swap in some diodes to remove the flicker.

Now I need a diffuser some glass and a box so I see an overhead projector in my future.

Finished an adapter for a gentleman that bought a scope at the clubs garage sale.

Also made a (very crude) web page for my Raspberry Pi/IoT based observatory controller. Now to see if I can get it to work with the Pi.

I spent today assembling, sanding and staining a rocker box for my rebuilt 16" . My 6 year old was stymied by my explanation of wood stain and is convinced that a paint brush is the wrong way to go, that a stain brush would be a better use of my time....

Calibrating the lasercutter. Once I get the scaling and kerf right, I'll move to scope parts. Can't wait!

I got a mechanical counter which I will try to use to roughly count my grinding strokes. 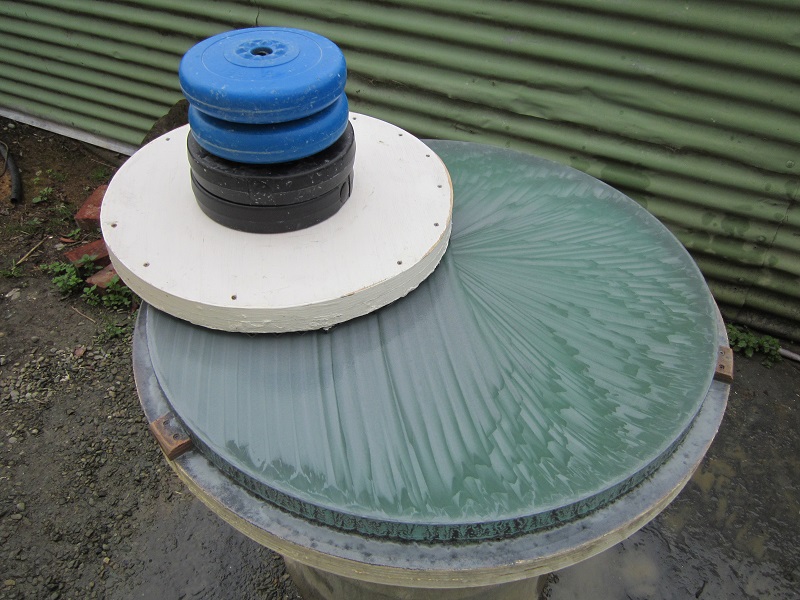 A bit of grind time on my 33" f3.8 (might get a lttle faster yet) mirror. Glass tile tool diameter 22", weighs 15kg,  and extra 20kg weights plus body weight applied. Takes some effort to move this one.

My miniature telescope mirror is almost over.

I was going to machine a mirror holder for grinding but it turns out the four jaw chuck is for a different lathe so I need to buy a chuck.

I spent some time trying to figure out why my equatorial platform wasn't working..

The lights come on, it makes noise but the roller and motor shafts don't move.. I partially disassembled it do see if the bearings were frozen, they seem free.

Time to Email the manufacturer..

I recently machined an adapter to put my CG-4 head on an EQ-2 tripod. I took a Machinist class at the community college and this was one of my projects. I think it turned out nice, works great too! 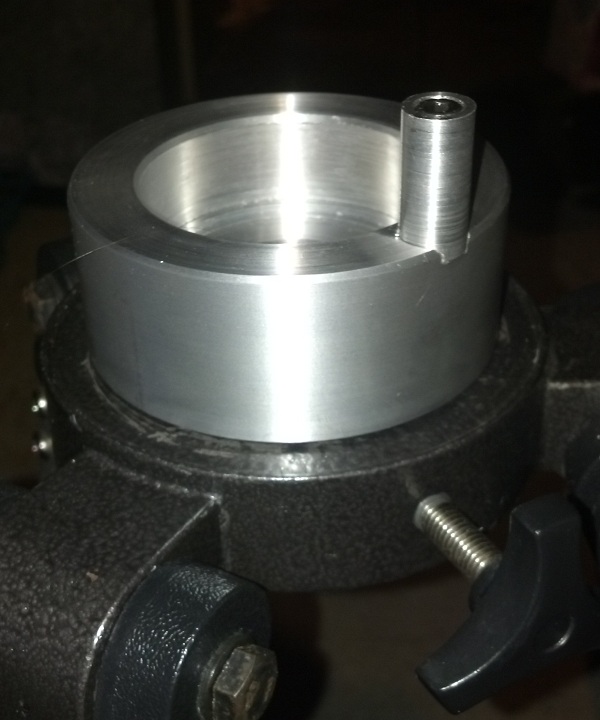 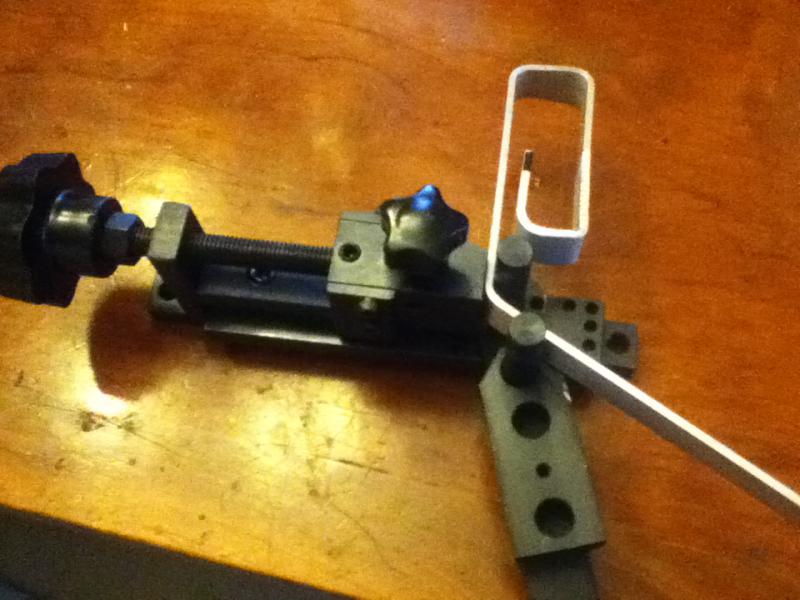 and since I took the day off cause of all the snow... 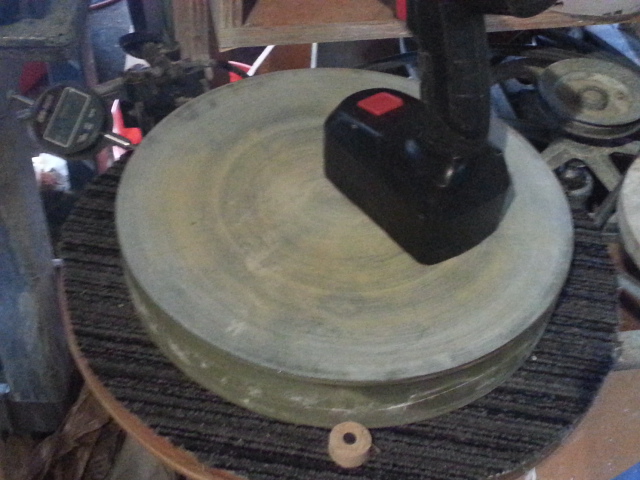 All week I have been sanding, staining and painting trying to get my 16" rebuilt by March 15th for a possible Messier marathon attempt! I finally finished up last night and now I am on to figuring out strut lengths. I am being hindered by our crazy weather and a crazy job, but I'll get there!

Not exact yet but hopefully will be able to get more exact dimensions of the circular diameter of the top hole and screw hole placements. 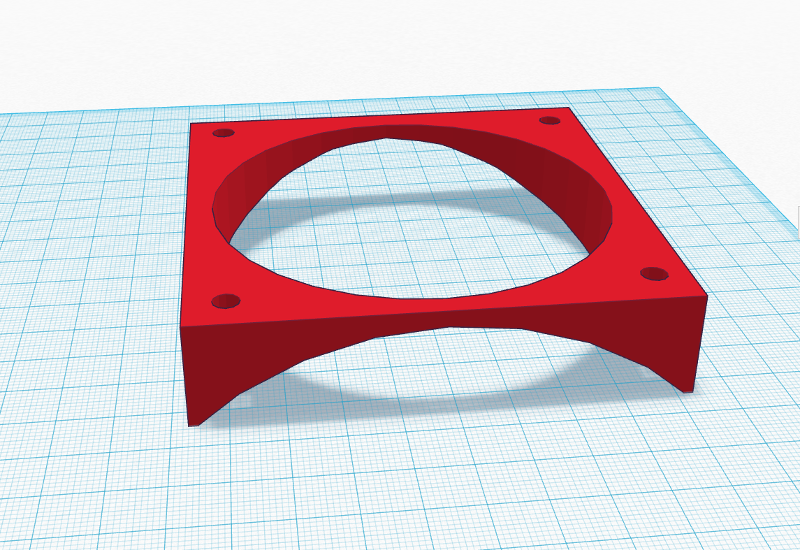 Center hole deformation occurred a little after treatment.
So has the additional work.
And mirror finish well

I think for my next few, I should grind with 12 and 6 micron grit before I go to Cerium Oxide.

That means I need better glass holders which means some lathe work.

I have a bit of a disagreement about the material to use, I'm thinking plastic for dimensional stability and easy machining.  The voice of experience says tile or granite but I can't machine it the same way, don't like the idea of relying on grout and I think its just a lot more work.

I'm going to price out 6" delrin bar stock to see if I can afford my preference. 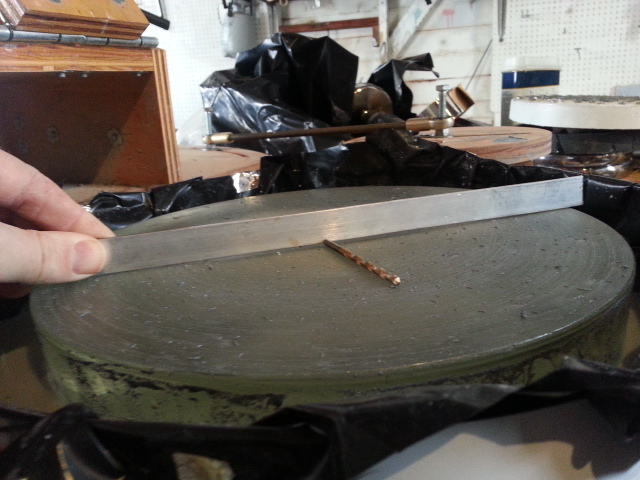 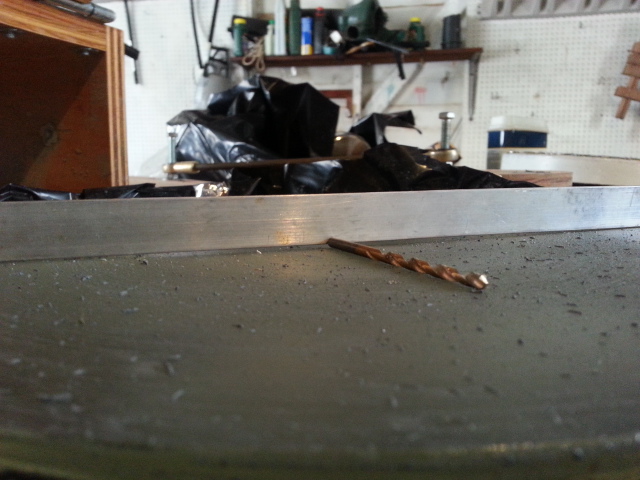 worked on getting my autoguider operational. used my lathe to shorten the eyepiece adapter so it would reach focus. not my best day using tools (lots-o-screwups) but i think it turned out ok

I think I figured out winspot.

I got the nice tight spot diagrams that a Stevick-Paul is supposed to have and got the mirrors packed in pretty tight.

My primary to secondary mirror spacing was bigger than I hoped for so its about a foot longer than I expected.

It looks like my 8" prototypes are going to pack like a pretty big Newtonian that doesn't break down.

Danny, where did you find that bender??  Do you think it'd bend 1/4" mild steel rod?

Danny, where did you find that bender??  Do you think it'd bend 1/4" mild steel rod?

and McMaster sells the other dies to bend larger radii.

but the one pin on the arm is loose and makes the bends walk not in parallel so I'm buying a harden shaft from McMaster to the correct size [-.0005] so the bend will produce a lot better results ...

still a lot cheaper than the $372  McMaster sells the same tool.

after getting 1/2 way to my sag I had to fillet the edge.

Today, I did the final trim on the elevation bearings of the 1 m project.  The elevation bearings were too thin, so I epoxied another layer of plywood to them to double up their thickness.  That worked great.  However, the plywood pieces I epoxied on were cut oversized so that I'd have some play when it came to alignment.  Today, I used a router with a straight tool with a bearing at the end to trim to new layer to match the existing layer.

The next step is to modify the flex rocker to accommodate the new width of the telescope, then make new brackets to support the castor wheels.