The motor years just tell when the motors are made. Not sure how that relates to the age of the scope other than the scope was made after the motors. Celestron could have purchased 100,000 motors in 1975 and were still using them from that pile in 1982. Please correct me if I'm wrong.

It don't. Them motors could have been sitting around years before the scope was made.

Here the orange tube C5 next to a newer Orion 127 Mak.  I was concerned that older optical surfaces and 40 years of oxidation would have compromised the C5's views.  My fears were unwarranted.  In side-by-side testing, the views of planets, DSO's and double stars were basically identical.  Additionally, the wedge/fork was rock solid, lighter weight, and more intuitive to operate than the GEM mounted Mak.  I am a happy camper.

Many thanks to Ron Luxemburg, nrcapes, Dr Zarkov and whizbang for the serial numbers and other details of their C5s which I’ve now added to the C5 Registry and bumped it to the 7th Edition.  As usual, the new entries are highlighted in blue and to keep the file size down I've only shown an image of the top part of the list in the image below, however the orange link above will take you to a jpg of the full version.

Dr Zarkov’s C5, serial # 2 3902 8, indicates that it was only sometime during or after the 2nd quarter in 1978 that Celestron changed from their ‘Q nnnn Y’ format (where Q = the quarter of production, nnnn = a sequential production number and Y = the last digit of the year of production) to a temporary format before they abandoned any date indication and changed to the ‘5nnnnn’ format (where 5 = C5 and nnnnn = a sequential production number).

With regard to motor numbers, whilst Don is right in that when looking at a single C5 in isolation, the motor date only gives the earliest date that the scope could have been made (assuming of course that the motors haven’t been replaced at some later stage) because Celestron could have purchased 100,000 motors in 1975 and be still using them for scopes produced in 1982, this is where I think there is value in recording the motor dates along with the serial numbers as it then gives an idea of how quickly Celestron’s stock of motors was turned over. 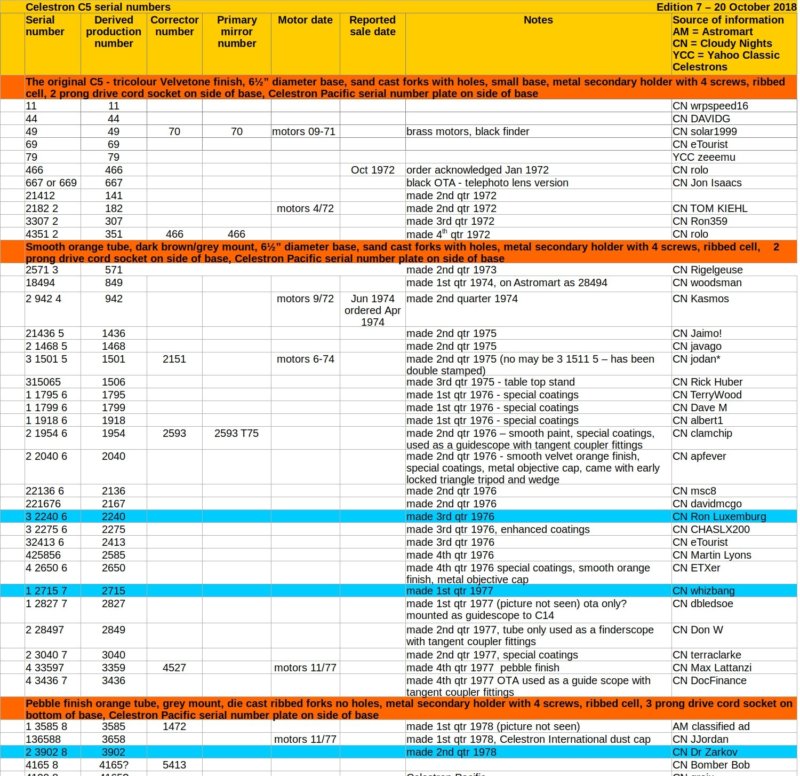 I'm curious to know about the small bases.

Did Celestron go back and forth with large and small bases?  Or did they start with small bases, then permanently  switch to large at some point?

They started with small and changed when they went to die cast to the same base as the C8.

They changed around late 1976 to 77 from the small to the bigger base. 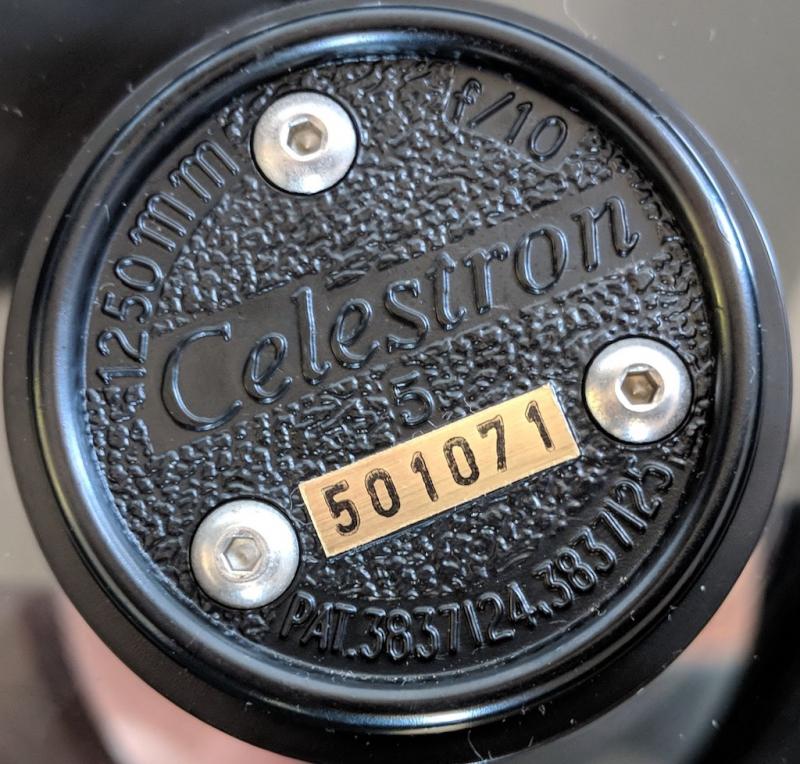 That 2ndary cap look like it was made around 1980.  The first run C5's had a smooth finish.

I would agree with Chas, 1980.  As far as I can tell, the 5xxxxx format serial numbers started to be used in 1979 and do not indicate the date of manufacture at all - the 5 signifies a C5 and the remaining 5 digits are a sequential production number so your uncle's scope is the 1071st one made since the 5xxxxx format was introduced in 1979.

Looking at the Registry, serial # 500895 has motors dated Nov 1979 and can't have been made earlier than Nov 79 whilst serial 501610 has motors dated April 1980 and can't have been made earlier than April 1980. Serial 502525 has Oct 1980 motors which suggests the motor stock was turned over fairly quickly and suggests that your uncle's scope was probably produced early 1980 or possibly at the end of 1979.  But it's all a bit of guesswork with this serial number format.

Ok, here's a photo of the finish, if that pinpoints it a bit better. Doesn't look like there's any serial on the mount/motor. 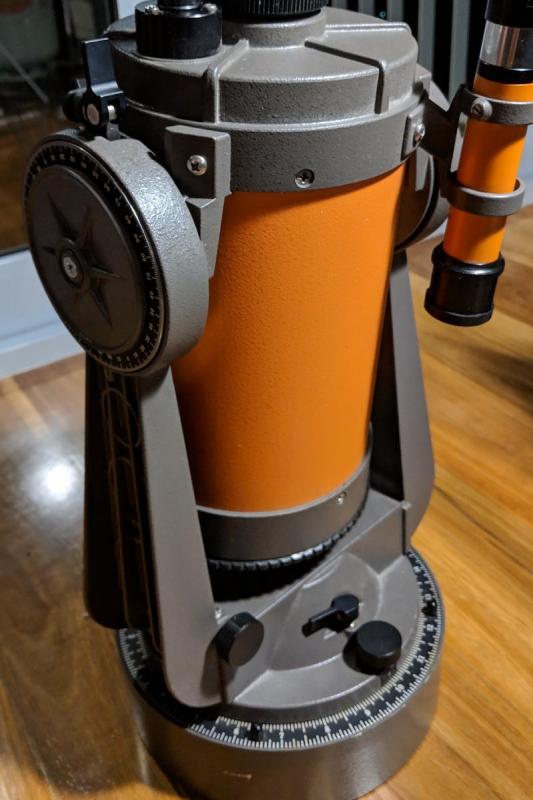 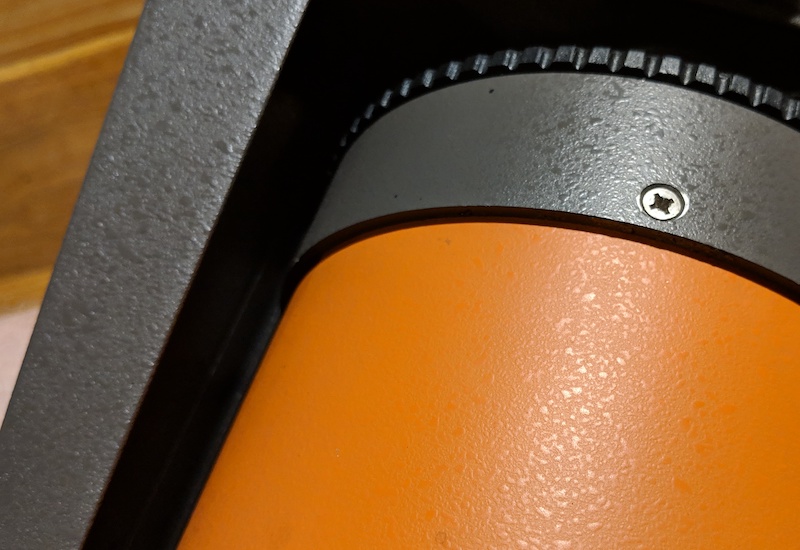 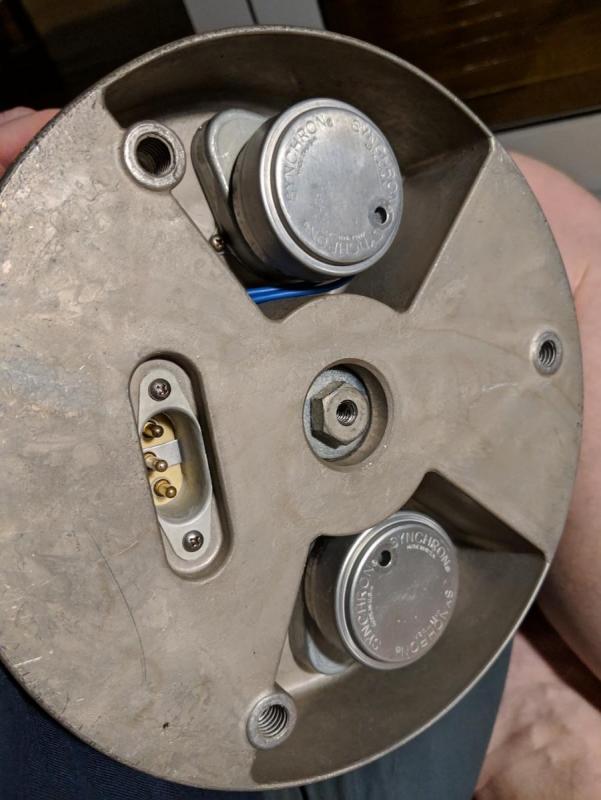 That is the later version with the bigger base.

As Dave has noted in post 230 above, the C5 base size changed to the larger size at the time the mount changed from being sand cast (holes in the fork arms) to die cast (solid fork arms).  Essentially, Celestron rationalised production by using the C8 base for the C5 as well.  There is usually only one serial number on a C5/C8 - on the earlier scopes it was on the base (unless sold as an OTA only) whereas for later scopes it moved to the OTA being located on the secondary housing.

Motor dates can be hard to see sometimes without removing a motor as depending on exactly where it is stamped on the circumference of the motor it may be hidden from view when the motors are installed.  The picture shows the date '4 81' (April 1981) on one of the motors of my C5 serial 502612. 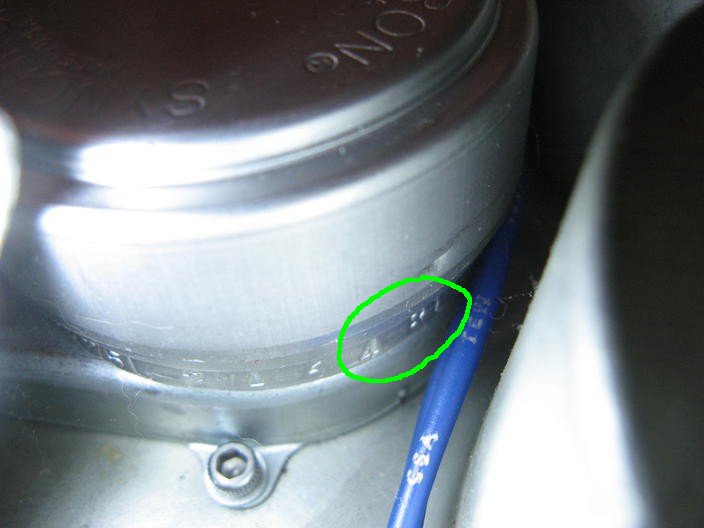 It's really hard to get a photo of these numbers without dismantling the base. I don't think any of the numbers shown in these photos are the relevant ones? 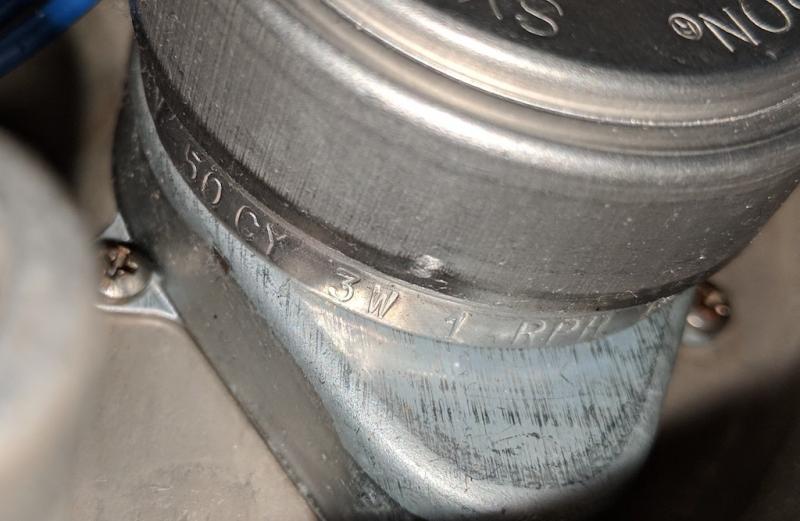 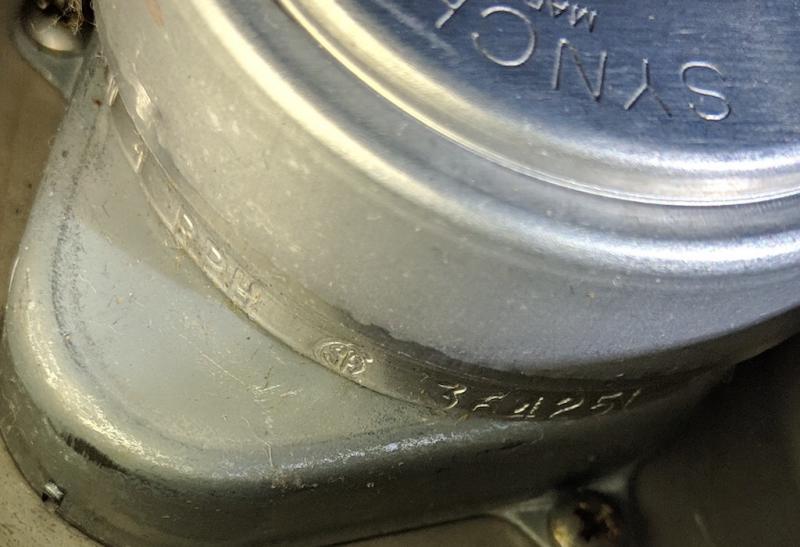 So, after awaiting for just a few decades... the telescope I was after as a kid magically materialized in the form of a cute blue trunk.

(...for you based in the US might have been a more common item, but AFAIK there were NONE sold in Italy at that time...

...not to mention that getting one from the US is not exactly a piece of cake, given the good number of local CN fellows hunting around... ;-)

Anyhow, here it is: finally a nice and complete C5 Sandcast of the beginning of 1976 (...exactly when I was perusing the first Italian Celestron Catalogue..) is here in the Dolce Belpaese...! 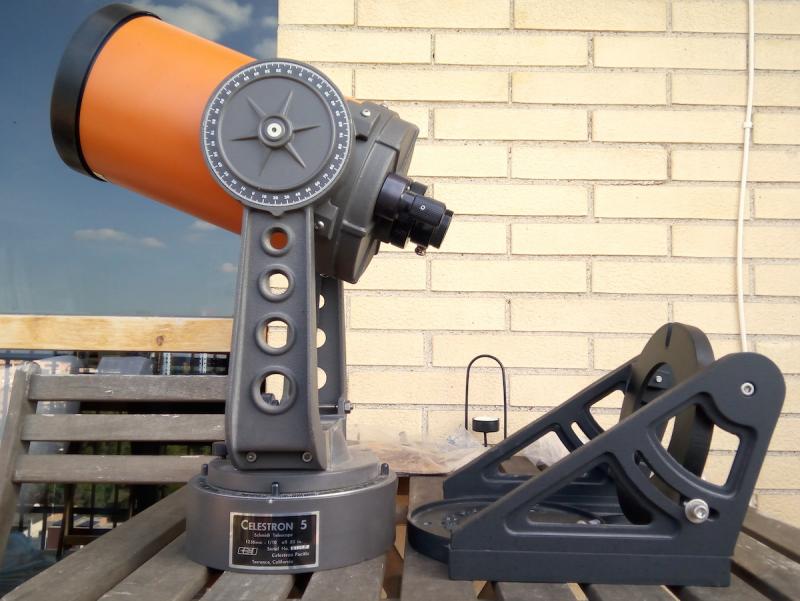 Front side. Schmidt plate was all fogged due to the evaporation of the inside lubricant -- the mechanicals were indeed DRY.

Thanks God both primary and secondary mirror are in excellent shape -- as the plate, that cleaned just beautifully.

And, yes, the wedge is the correct one! 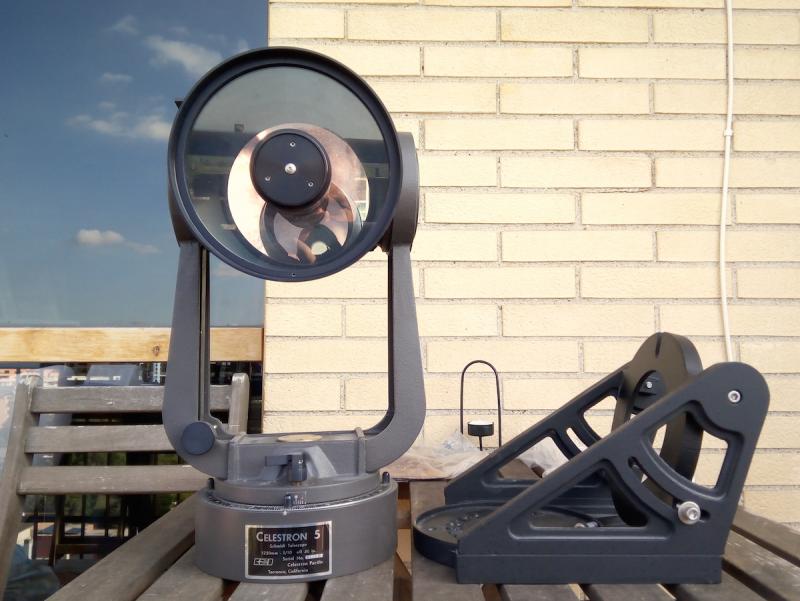 Now, since James is already awaiting for it like a flying ace, here is the plaquette with the serial # 1 1926 6 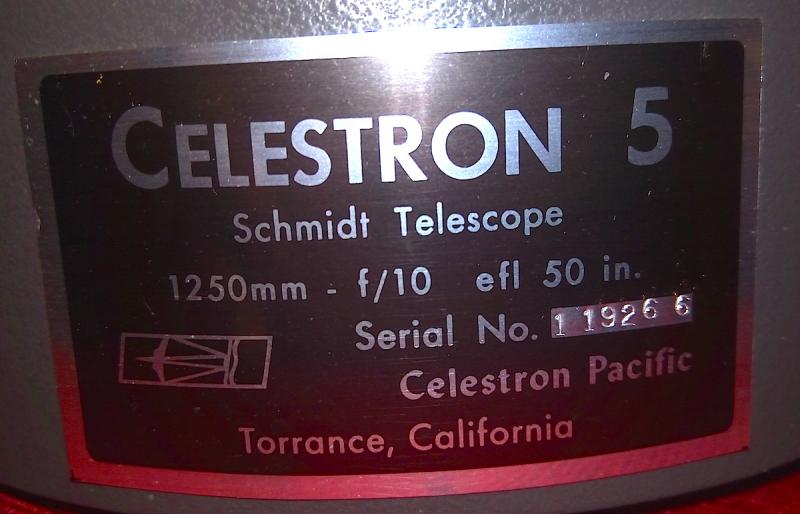 So, since the Schmidt plate was severely fogged and the focusing mechanism stuck, I had to pen up the whole thing.

Thus I can give you further info form inside.

Back of the mirror -- at those times they really wanted to let you understand it was hand-optimised...!

2706 opposite to the focuser corresponds both in figure and position to the orientation of the Schmidt plate (which has the same serial at 3 o'clock).
The vertical thick band pointing down at about 6:30 corresponds to an equally think mark on the edge of the plate still at 6:30 position.

So, everything is original and untouched. And monkey-proof as per the correct orientation. Which is always great.

Ah, the whole mechanism regrased beautifully and now it is silky smooth.

As usual, not a single piece of plastic anywhere in the whole instrument. Good old times... 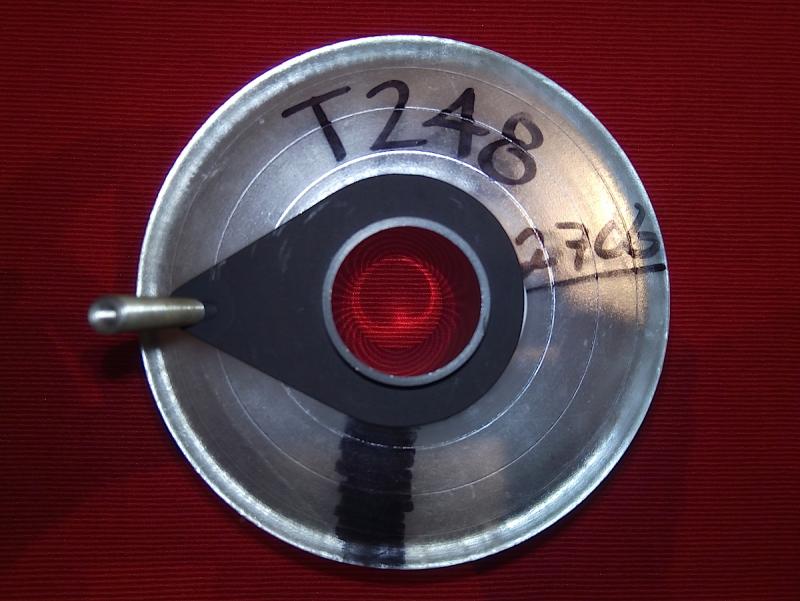 Inside the OTA no further serials (I had found two in my other die-cast, but not here). 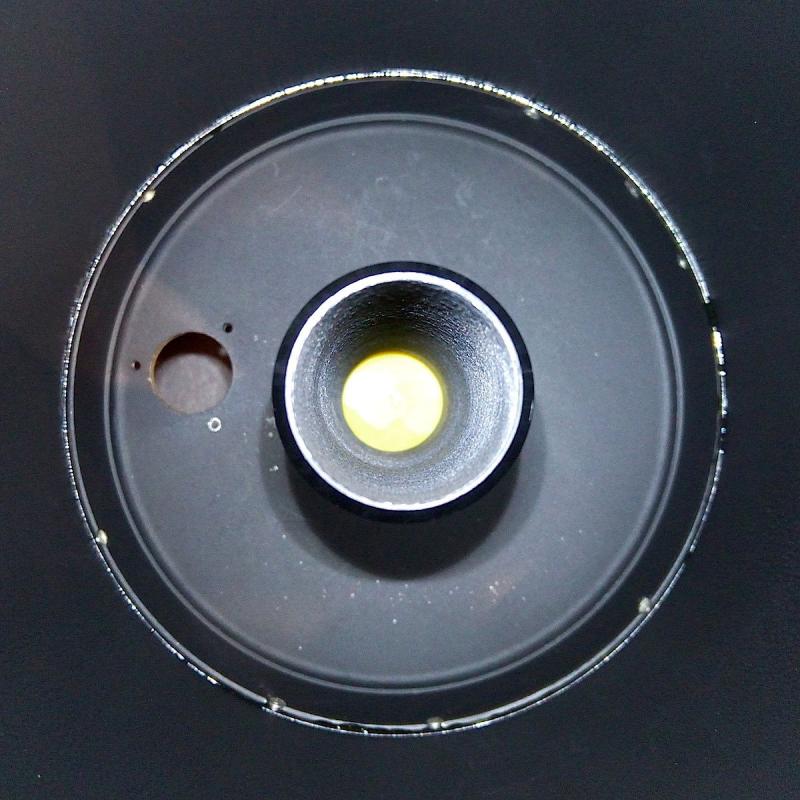 The serial on the Schmidt Plate, as said # 2706 (as behind the main mirror) -- doubled by the glass reflection). 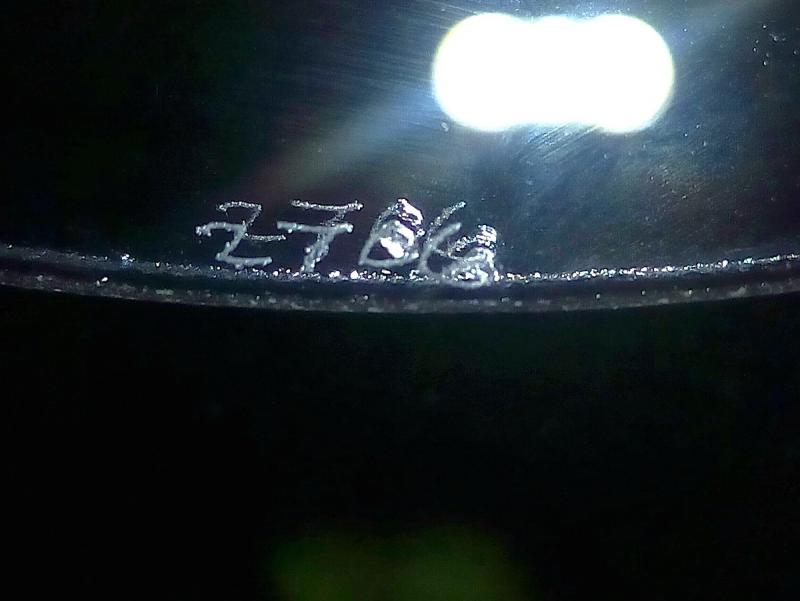 So, here you go with the summary:

PS/ Incidentally, the instrument came without powercord. At present is sharing the same of a sandcast C8.

Anyone has a spare or can point me towards one?

Or, alas, the components to make one?

Many thanks in advance

While mine actually uses the same die cast base of the C8.

Great photos of a work of art!

Maybe the T number is the "polishing tool number" used to finish mirror (to keep track of potential quality issues when the mirrors were mass produced.???)

Cables can be found ebay: