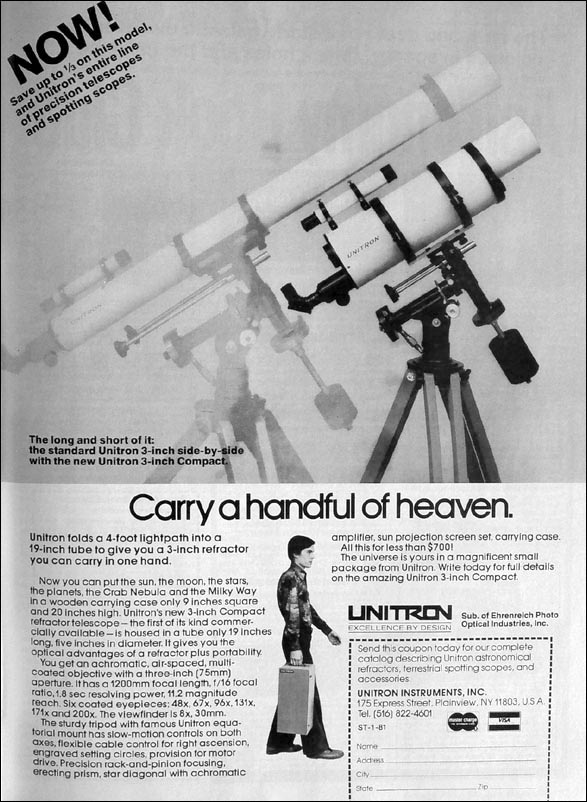 If you've ever wondered what the proper use of the Edscorp Satellite Telescope looked like.  Here is a photo from November 1957: 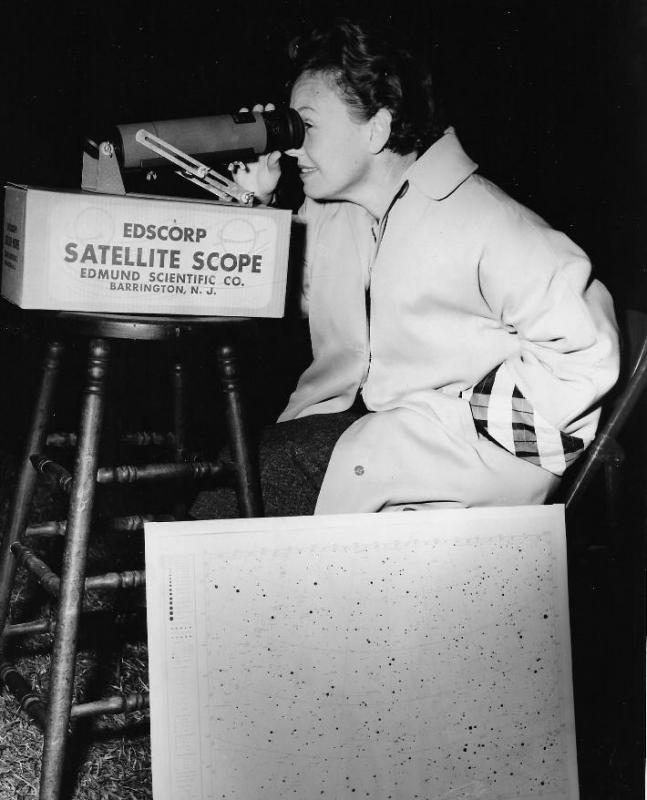 I still wonder how they kept that mirror from fogging up or what they did when it did fog up, bless their

I still wonder how they kept that mirror from fogging up or what they did when it did fog up, bless their

Hot toddies in the clubhouse!

Check out that beautiful star map in the foreground! Mine is the 1958 edition in color. Comparing the image, I thought it was a huge map, but looking at the stool I think she was a short woman. Pretty cool!

I  was going through some of my old science paperbacks and I found this one from 1957 (2nd printing, the copyright is 1956). It’s pretty cool!

It was written by a couple of the Huntsville Ala. team.

Here’s the table of contents:

Terra - It would be interesting to see what predictions they made for the future in that book and compare those to what we have today.

I talked "Operation moonwatch" at the small meeting, in Japan.

Thought I would share some pictures of a satellite tracking telescope a friend of mine made and used back in the 50's for Project Moonwatch. Dick Karlson, a member of the Astronomy Section of the Rochester Academy of Science, built this telescope using war surplus parts. As Dick was not a skilled machinist, I'm sure he had help in constructing his telescope. My strong suspicion is that the metal parts were manufactured by Ralph Dakin (of Dakin Barlow fame), who was a close friend of Dick's, a fellow member of the ASRAS, and who also built other telescopes for my friend. In fact, I wouldn't at all be surprised if the objective lens of the scope was something Ralph pulled out of the discard bin at Bausch and Lomb where he worked. (Dick, on the other hand, worked across town at Kodak, where he was a research chemist working on photographic emulsions.)

Dick became a member of the Penobscot Valley Star Gazers (which meets in Bangor, Maine) after moving to Maine upon retirement and often shared with us his adventures in Project Moonwatch. He was especially proud of the time when a particular Russian satellite did not show at the expected time or place, but was instead first observed by him (using this particular telescope) later in the wrong location. Apparently the satellite suffered a malfunction (explosion?) that pushed it off course. In listening to Dick, I would grow nostalgic for a time in amateur astronomy that was new and exciting, when amateurs could use very simple equipment to make useful contributions to science. Sadly, I was born too late to enjoy those times personally, but I very much enjoyed listening to my friend tell his tales.

Thanks for sharing this, Scott. It's a great piece! Apparently the wonderful surplus eyepieces were easily available back in those days. Here is a Satellite Scope made with one of those and a binocular objective. 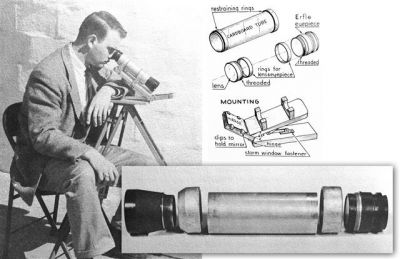 I talked "Operation moonwatch" at the small meeting, in Japan.

This Moonwatcher was made by Astro.opt.

If you are a satellite scope collector or fan you have undoubtedly seen something like this. 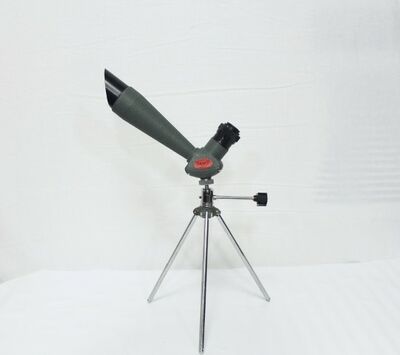 But take another look. Anything strange about this one? It is not the more common version of the Tasco satellite scope with the laid back 120 degree angle. Instead this one is 90 degrees. Here is a comparison of the two side by side. 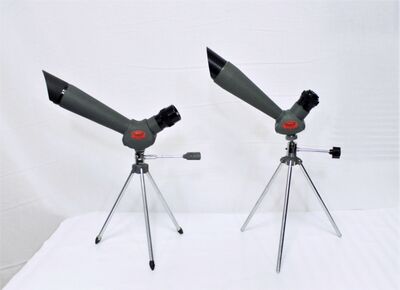 Thanks for the info; I wasn't aware of the 90 degree version and once I had one of the 120 degree ones I didn't look so closely at Tasco satellite scope listings any more. I'll pay more attention now!

Every time I think I've seen all of them, a different one pops up.  Amazing.

If you are a satellite scope collector or fan you have undoubtedly seen something like this.

But take another look. Anything strange about this one? It is not the more common version of the Tasco satellite scope with the laid back 120 degree angle. Instead this one is 90 degrees. Here is a comparison of the two side by side.

Do you have the box or inspection tag for the 90 degree version?

The 120 degree angled version you sold recently had inspection tag No.F310072 (from your video best I could make out) and Ken's matching version had tag No.F310206. So I would say both scopes had the inspection tag placed in the box possibly on the same day.

I have one albeit sans the handle assemble

Do you have the box or inspection tag for the 90 degree version?

The 120 degree angled version you sold recently had inspection tag No.F310072 (from your video best I could make out) and Ken's matching version had tag No.F310206. So I would say both scopes had the inspection tag placed in the box possibly on the same day.

I have one albeit sans the handle assemble

Mine did not come in a box so it had no inspection sticker. I saw it on Ebay and like Ken might have done I thought little of it. I almost passed it by until I noticed that was 90 degees. After looking around online I think the 90 degree version is much less common. Makes you wonder why they did these things......

I found this neat video on YouTube that explains the 1957 International Geophysical Year (IGY) along with some great Moonwatch coverage.  The title suggest that it was made in 1955, but the contents suggest early 1958:  https://www.youtube....h?v=JM0xU6CAP7Y

I got a kick out of the construction of the artificial satellite, that was used for training and testing of the Moonwatch teams.  It looks like something I would have come up with!

The discussion here including about Scotty Houston's "apogee scope" reminded me of an original copy of an obscure flier I have.  I consequently found it and have attached scans.  The 5-inch apogee scopes were used by Project Moonwatch as described in this thread.  But I believe they were produced by more than one source (and in haste) for Project Moonwatch.  As the attached flier documents, one source was the private shop of Charles Ridell in Williams Bay, Wisconsin.  Ridell was chief instrument maker at Yerkes Observatory.  He had an adopted son, Boro Spoz, who came to America as a young man after World War II.  Many research instruments and accessories at observatories of the middle 20th century were signed by "Ridell Spoz."  The pay at Yerkes was low, so the family maintained a home shop and a private business that was independent of the historic Yerkes instrument lab that had been created by George Ellery Hale from the earliest days of the Observatory.  The Ridell shop produced things like offset guiders, "apogee telescopes," blink comparators, small equatorials, and even measuring engines and occasional Schmidt cameras.  (I'm not sure who did the actual optics in the one signed Ridell Schmidt camera I know; maybe we'll learn more someday.)

It came to pass that Bozo Spotz had a son, Robert Spoz, who became a third-generation senior instrument maker at Yerkes.  Boro was still living when I joined the staff in late 1990, but he passed away within a few years.  I learned much of my modest knowledge of machining thanks to the generosity of Bob Spoz, who allowed people like me to use the shop and get good experience.  (Key to keeping in a master machinist's favor was simply cleaning-up after work -- something obvious to me, but not always to busy young people at Yerkes!)  Historically, an amazing cast of interesting people, including William Gaertner, George W. Ritchey, and many others, had spent time in that same shop from the earliest years of Yerkes.  Robert Spoz ended up travelling many times to South Pole Station in Antarctica to serve as machinist there during the South Pole summer seasons, University of Chicago having been headquarters for CARA, the Center for Astrophysical Research in Antarctica.

Anyway, the historical connections between such things are always fun.  The attached old flier shows how Charles Ridell produced what others called "apogee scopes" before Boro became part of the business.  The main parts were from military surplus.  This Cloudy Night thread has taught me that the Ridell shop in Williams Bay was not the only source of "apogee scopes."   Until now, I had assumed that all the 5-inch scopes like the one Scotty owned and wrote about had come from Williams Bay  -- but now that does not seem true.  A connection between Project Moonwatch and Ridell was Yerkes astronomer George Van Biesbroeck (1880-1874), who was a leading figure in Moonwatch.  There was probably a very urgent demand for the 5-inch telescopes for a while, and pressure was on for more than one source to produce them quickly from surplus components.  Charles Ridell may have also continued afterwards, marketing them as the flier suggests.  I've only seen one example surviving in the exact form (with mounting) illustrated in the flier.  It was about 15 years ago, owned by a lady in Pasadena.  (No connection to the Hale Solar Lab.)  I've learned more about the history of "apogee scopes" since then!

The scan didn't make it!

This is interesting because all sources so-far have stated that the Apogee scopes came from the Naval Weapons Lab.

There are two types, one uses a thin, spun or die-stamped aluminum front cone, the other uses a heavy-duty, cast cone.  The thin cone uses a 125mm cemented doublet, the cast cone uses a 120mm air-spaced Baker doublet.  I believe Houstons was the latter type, like mine.

Here are the scans of the flier I describe in my post in this thread just above.