First off I will say that I don't have one of these, nor am I specifically planning on getting one.  But was curious if anyone might have bought one and tried it out.  I am aware of one person who did and said that in his ES ED127 it performed quite well for a $19 eyepiece, and he got pinpoint stars to the EOF.  Also mentioned he didn't notice any internal reflections or blackouts and that eye relief was decent.   First time I've heard of the label, and I see they also market a 4mm as well.  Sort of an odd mix, 23mm and 4mm.  Anyway, just curious if anyone has tried one for the sake of trying one.

I have ordered them to have a look and experiment.  What the heck...$27 for 3 eyepieces!!  If they turn out to be dogs will have fun taking them apart

I mostly use f/8 refractors so most eyepieces work well.  Should be here next week.

Thanks Bill, looking forward to your comments.

Yeah I think you're right John.  Thanks for pointing that out.  But I have to wonder if they are truly "Celstron" or if the seller was just stating a name he thought would help them sell.  I don't see a brand name in any of the images they provided.

Hey, if you built them would you put your name on them?

There's a lot of talk going on about these, some claiming they use at least one plastic lens.  It would be nice if someone tore one apart and told us for sure.....and really did some observing with one in various scopes.

I suspect Bill will dissect one and let us know.

I'm thinking it was a new line that Celestron was considering, then had a test run, then decided against, and now the company contracted to make them is selling off the initial test run of units.  If it has a plastic lens, or more likely a polymer one or a polymer overlay that accomplished the aspheric, I really don't care.  If it performs is all that matters.  But will definitely take one apart to see what's up

As I have mentioned in an earlier thread, they actually bothered to coat the lens. Can one coat plastic lens?

Can one coat plastic lens?

Maybe I'll just give it all up and open a nail shop....pick a color!

From the outside looked inexpensive, but still interesting.  Top of the eyepiece is rubberized so no issue for eyeglass wearers.  Housing is plastic.  Barrel is light gauge aluminum.  Eye lens is fairly large and eye relief not tight. And look, that dang undercut defect!  When will eyepiece makers learn 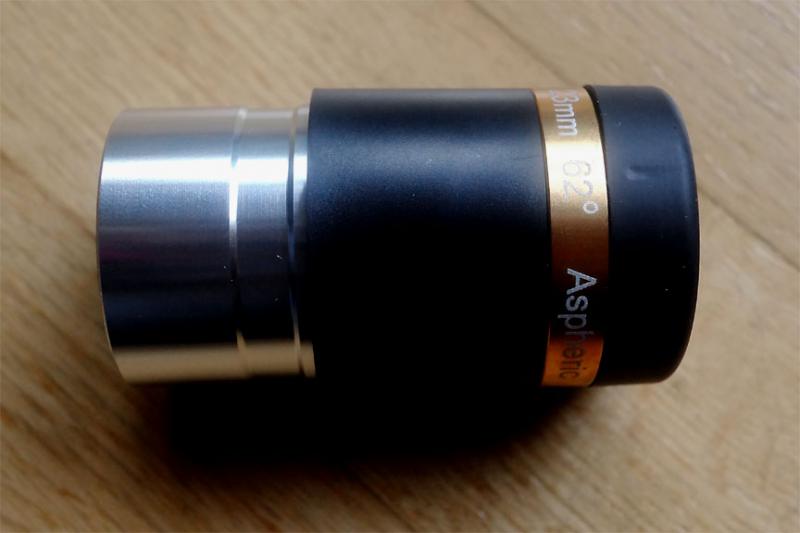 This is a 1-2 eyepiece.  The field doublet is strongly curved and large, heavy, and robust.  Nice hunk of glass.  The eye lens is inset in a spacer ring, and it is not glass...so plastic or polymer.  It appears to be coated as well, and definitely aspheric when looking at it. 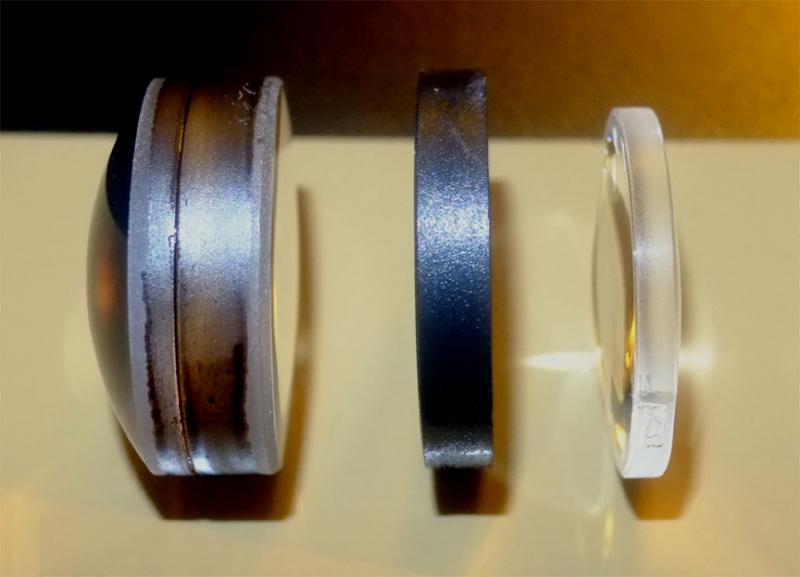 Popped it quickly into an 80mm f.6.25 Apo and the view was nice.  Field curvature in the last 1/4 of the FOV but to be expected from this scope as most eyepieces do show it in this scope.  But overall a nice and sharp view.  But proof of performance will be in the evening with stars, not leaves in the daytime

AFOV I have to measure, but is large and generous so probably near the 60 degree mark.  It weighs little.  But 23mm and 60+ degree AFOV!  If it is acceptably sharp then will make a great light weight bino pair of EPs for only $9 each!!  Yes, I got a pair to binoview with

Cloudy tonight so perhaps tomorrow night for a test run.

If it is acceptably sharp then will make a great light weight bino pair of EPs for only $9 each!!  Yes, I got a pair to binoview with

We can count on Bill to go where no man has gone before...

Thanks Bill, looking forward to your visual review.  Something like that might work well with my 60mm f/15 Jason refractor!

White light solar, binoviewing in the TSA was fantastic.  The AFOV is wide enough at this ling focal length that there was still some vignetting of the AFOV with the WO Binoviewers.  Also occurred with the 20mm 70 degree AFOV Meade RG Wide Fields, but not as bad as with those.  So with the 23mm Aspherics the field stop still visible just dimming before you get there.  With the RGs the field stop was not there to be seen in the WO Binos.

Trying to examine the FOV was a little tricky with white light solar, but appears right now that the field curvature was also there like it was in the 80mm f/6.25.  It could all be focused out with a 1/4 turn of the fine focus knob for a sharp sunspot at the field stop.

So used them at native 23mm (35x) and with the 1.6x OCA (57x) in the TSA.  Sun Spot details etched and mesmerizing.  I have to say that white light solar I think is so much more interesting than Hydrogen Alpha like with my PST.  The details in and around the sun spots, and watching them change and morph in real time is just incredible with white light...especially in a 100mm scope.

Anyway, these make a great $18 bino set of eyepieces for white light solar...and they weigh zero!

Bill, beware of the plastic housing melting under the sun!

Bill, beware of the plastic housing melting under the sun!

Not a chance of that happening!  I use a full aperture solar filter.

And again...the sun spot views they put up today were so detailed and memorable.  White light solar can be simply amazing!

I meant melting from sun light hitting the housing and eye lens from the outside ... which is possible at where I'm at!

There was a guy here who left a Hyperion under the sun for a while ... and the eye lens cracked!

I can understand a lens cracking as stuff left in sun, especially dark colored, can reach 150 degrees F.  At that temp cemented glass is undergoing lots of stress.  Most plastics will not melt at that low of a temp; LDPE (low-density polyethylene) is a common consumer plastic and melts at about the lowest temp, which is just over 200 degrees F.  I think in order to actually cause a melt the sun would have to be going through a lens in the eyepiece and the converging rays of course can get very hot.  But just sitting in the sun with lens caps on doubtful I would think.  Plastics are a rather large family of compounds so can't generalize.  One of the more temperature resistant varieties needs over 500 degrees F to melt.

FWIW, the sunspot group I have been observing for the past few days with the 23 Aspherics is AR 2367 (http://www.astrobin.com/full/188709/0/).  Seeing about the level of detail in the pic if not a little more, and a more etched view as well.  Quite spectacular.

Final comments on this eyepiece...

Inexpensive construction.  So cheap but not the worst I have see.  Housing is a plastic material, top of housing is rubberized to protect eyeglasses, barrel is aluminum.  Optics are in the housing so the threading and retaining rings are all plastic as well.  There is no field stop so the barrel is used as the field stop.  Overall a very light eyepiece.

This is a 1-2 design.  The eye lens singlet is non-glass and aspheric.  Based on reflection off the surface it is also coated. Edges are not blackened.  However, this lens fits into a black retaining ring prior to insert into the housing.

For daytime use it provided a nicely sharp and high contrast view in an 80mm f/6.25 Apo.  View was sharp across the field except for the region close to the field stop.  Primary off-axis issue for daytime use appeared to be field curvature (from the eyepiece or the scope).  Eye relief was generous and long enough that no contact with the eyepiece housing was necessary.  AFOV, although not quantitatively measured, was compared to other eyepieces and was easily in the 60-62 degree range.

For daytime white light solar viewing I used a TSA-102 f/8 Apo with WO Binoviewers.

White light solar viewing was excellent.  Sunspots were perfectly crisp and highly detailed.  As good of a view in white light solar as with any other eyepiece of any quality level.  Only issue was vignetting at edge of field in the f/8 scope, indistinct field stop due to use of barrel as field stop.  With disk of sun in center of the FOV the entire solar disk was crisp and resolute.  Crispness of the view only suffered in the outer most portion of the FOV nearer the field stop when the Sun drifted to the field stop.

In the longer f/8 scope the field stop showed vignetting and a less than distinct edge.  This was probably due to the eyepiece using the barrel for a field stop.  I do not recall this behavior in the faster f/6.25 scope.  But quite obvious in the f/8.

With Barlow (TV 2x, 2.8x Klee) the AFOV seemed to become a little restricted and again the off-axis remained vingnetted in appearance with an indistinct field stop.  However, it provided very crisp and nicely contrasted views.  Lunar viewing was superb.

No lateral color was noted in any of the tests.

It is a $9 eyepiece so hard to fault anything for that price.  Performance was actually incredible for the price and given only a 3 element eyepiece.  If a field stop is inserted this would have been a much more pleasant eyepiece to use, with little faults.  And if the AFOV were restricted to 55 degrees it's performance would have been excellent!  So it has the potential with a little ATMing to be quite a find and also an excellent outreach eyepiece.

The use of plastic retaining rings and threads in the housing is of course the downfall for the eyepiece and will limit its life if disassembled too many times as stressing the threads will happen.  As far as the non-glass eye lens, I am going to have no judgment on it as performance of the eyepiece in the central 75% of the FOV was excellent.  Obviously the use of an aspheric allows this low lens count eyepiece to work exceedingly well.  My only question would be on the longevity of the eye lens after continued cleaning.  But if the coating used provides a hard enough surface, this may not be an issue.

Overall a very inexpensive build, with a matching price, but with performance well above its build and price characteristics.  For $9, certainly fun to have one in the box

If it is acceptably sharp then will make a great light weight bino pair of EPs for only $9 each!!  Yes, I got a pair to binoview with

We can count in Bill to go where no man has gone before...

I think that was another Bill...

Overall a very inexpensive build, with a matching price, but with performance well above its build and price characteristics.  For $9, certainly fun to have one in the box

I just rejiggered my eyepieces with some cheap ones. Now I have to start all over again.