Conditions were not very good last night, full moon, and thin clouds.  But I gave this challenge a try with my C11 and MCX icx418 class 0 at F4.4

The MCX has a gain setting, and typically I use half-way or AGC4.  With the skyglow I had to use a filter or else I would get the image washed out.  In order to not use a filter I had to lower the AGC to 2. Similarly, to meet the requirements of the OP and see just how fast you can get to Mag 14 or better, I tried using max AGC or AGC8.  But with the sky conditions, and even with using my astronomik UHC filter the best I could get was 8s exposure before we got washed out...   see below: 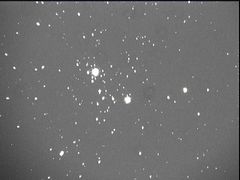 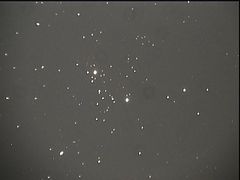 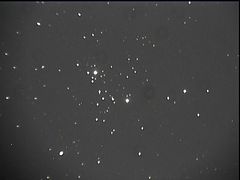 This is a 10s exposure of NGC 6910 from last night at 36 deg N with the Lodestar X2 mono coupled to a Skywatcher Quattro 8" f/4 alt-az mounted Newtonian. SQM 19.5 (86% moon at 5 deg elevation); shot through a Baader C (clear) filter and captured with LodestarLive. 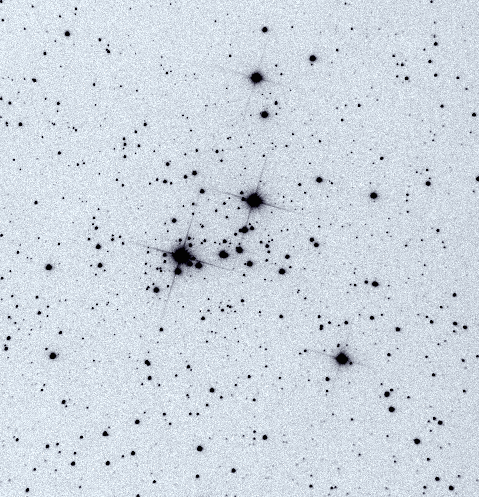 I think you win Martin but what is the faintest star recorded?

I'm guessing m17.15 via Wikisky away from the core near the bottom edge but it's not very reliable near nebulae and N6910 is in the middle of a diffuse nebula ;-(

I'm hoping there will be more entries...

Here's a chart with stars down to mag 20 from the PPMXL catalogue in case it helps.

I'm hoping there will be more entries...

Here's a chart with stars down to mag 20 from the PPMXL catalogue in case it helps.

I found a few in your image down to Mag 19 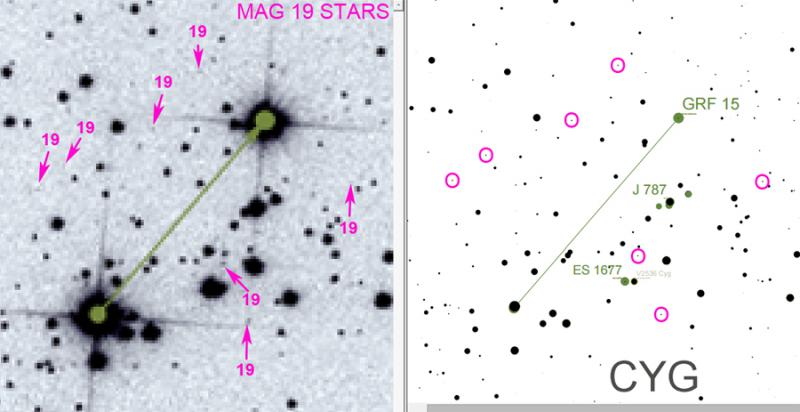 Thanks Ken, but I'm guessing that the original chart provided is V mags while the bulk of those in PPMXL are B if I recall correctly, so some correction will be required. It is worth checking how well the PPMXL mags correspond to the V chart. At some point I'll try to plot these mags to one d.p. on the chart too, though spotting the correspondences is a lot of fun ;-)

What's the difference between V mags and B mags?

The V magnitude is computed over the central part of the visible range of frequencies while B is computed over the blue range (see for example this filter set or this page on Photometric systems for an exhaustive list of passbands used in photometry). V and B are not in general equal but which is larger will depend on star colour, roughly speaking.

Also Google 'colour index' for an explanation.  V mags are rarely used by pros as traditionally the plates of 100yrs ago were blue sensitive (B mag) and most of the star types via temperature etc can be deduced via spectroscopy in the blue region.  Although modern detectors like CCDs are more sensitive to red/NIR the system has never been rescinded.

And the sensors we're using for much of our EAA work are quite sensitive in the blue range making objects that are brighter in the B values seem substantially easier to see than what the published V values might first indicate.

I've seen this where folks crow about being able to view very faint Hickson objects that actually appear at least a magnitude brighter than the traditionally published values because of the camera used.

This plot shows the locations of the B and V band centres relative to the spectral response of the camera I used, showing that it is significantly more sensitive in the V region. 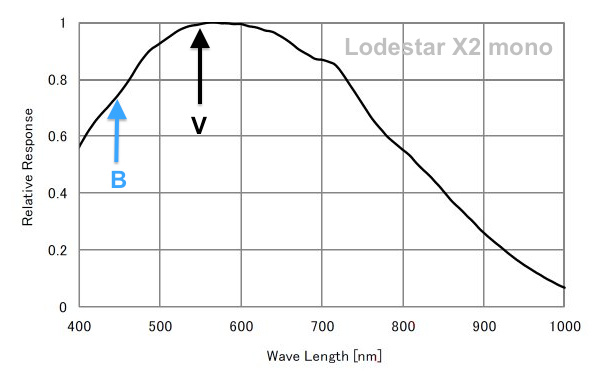 Regarding NGC 6910, according to this article the mean B-V for the cluster is just over 1, meaning that on average the mag 19 (B) stars detected correspond to mag 18 (V). A couple of caveats:

(i) for each individual star, one would need to know its spectral class (or equivalently have a measurement in another band) to apply the appropriate correction. For example, any blue stars labelled as mag 19 have a V magnitude larger than 19. Since the majority of stars are at the other end of the spectrum, as it were, it is more likely that the V magnitude is smaller than the B magnitude (also shown by the colour excess B-V quoted).

(ii) the magnitudes plotted on the chart are rounded to integers.

So based on these points, it seems reasonable to say that most mag 19 stars detected are likely to have a V mag between 17 and 18.5.

Thank you all for the explanations!

A slightly bluish, white star such as Vega, which has a B-V of 0.0, has the same V and B magnitude.

A random star not significantly suffering interstellar extinction is expected to have a B-V of about 0.6, meaning the V magnitude is brighter than B by 0.6m.

The discrepancy between B and V magnitudes depends also on the presence of interstellar extinction, which is generally strongest near the galactic equator due to the flattened system of dark molecular clouds. And NGC 6910 is almost exactly on the glacic equator, and moreover lies in a region of quite notable fairly nearby dark clouds which make up the Great Rift.

As noted, the mean B-V for the cluster is a little larger than 1 magnitude, which for such a young and hence bluish object implies that this color excess is due almost entirely to extinction and reddening. This cluster is comparatively nearby. As we look to ever fainter stars in the field, some will most likely be even more distant non-members, and hence probably even more strongly dimmed by the greater optical depth of interstellar dust. It could be the case that some such distant stars could be suffering a color excess of 2, or 3, or 5 magnitudes, if not more. And so a B magnitude will be fainter than a V magnitude by that amount.

Incidentally, a color excess of 1 magnitude is a total visual extinction of about 3.1 magnitudes. In the absence of the intervening dusty clouds, NGC 6910 would otherwise be a bit more than 3 magnitudes brighter.

What is YOUR magnitude reach?  How deep can your scope/camera combination go in a 10 second, single frame?

I'm hoping to comply here some data to compare apertures and cameras with a standardized exposure of 10 seconds.  No stacking, please, just a single shot.  Hold off on the post-processing as well, please.

Tell us what camera you are using, scope, aperture and the condition of the sky, etc.

The targets are NGC 6910 and NGC 7031, both conveniently situated in Cygnus.   Magnitude data from Roger N. Clark's excellent (and long out of print) Visual Astronomy of the Deep Sky  will be used to get your image's approximate limiting magnitude.    The diagrams are below.  Mention your limiting magnitude based upon the diagrams....

Great post! This is a fantastic test! I'll have to give this a go when possible. Lot's of factors to consider of course.

That certainly is very impressive, and the price/performance king too ... lol.

What are your skies like? (pretty good if I remember the images from your NSN broadcasts)

I was curious what the little Sony sensors could do ... what are you using for a frame grabber?

I'm assuming that you used the C80ED natively (no focal reducer)?

I've been meaning to try out my SCTs natively in this test. I think I might also dust off a refractor to try.

Another thought is to go up in image scale (Barlow) and use a more sensitive camera (In my case that would be an MC Xtreme vs. the Skyraider AGm), the different cameras used at different focal lengths would highlight the trade off between image scale and resolution/star quality.

This location is 70 miles north of Manhattan, so although its not THE CITY, it is still suburban and orange skies.  I am using a Dazzle 100 and this shot was done at native or F6.5 I think it is 600mm I believe.

I tried this same target with my MCX icx418 class 0 and I think I got down to like Mag 17 or so, but not quite as good as the Lodestar X2 which got down to Mag 19, see image below.  This of course suggests my old MCX is not as sensitive or as good on price performance, $1499/17 =  $88/mag  ( Ouch!! )   AND I was using the C11 at F5 ish...  so in this regard again the cheapo camera is a big winner and the more expensive older generation icx418 MCX is not that great in terms of $ per mag performance.

This is a single source frame without any processing. The RAW image was converted to TIFF using Digital Photo Professional. The image was cropped and labeled in Photoshop. No levels, no curves, no adjustments of any kind. I did use the in-camera darks and color balance, which is part of my normal EAA routine. I may have a chance to do better than this tonight. On this particular evening the humidity was very high and the transparency was about as bad as it gets, but it was the best that we’ve had in the past week. The limiting magnitude is well below the chart that we are using as a reference. 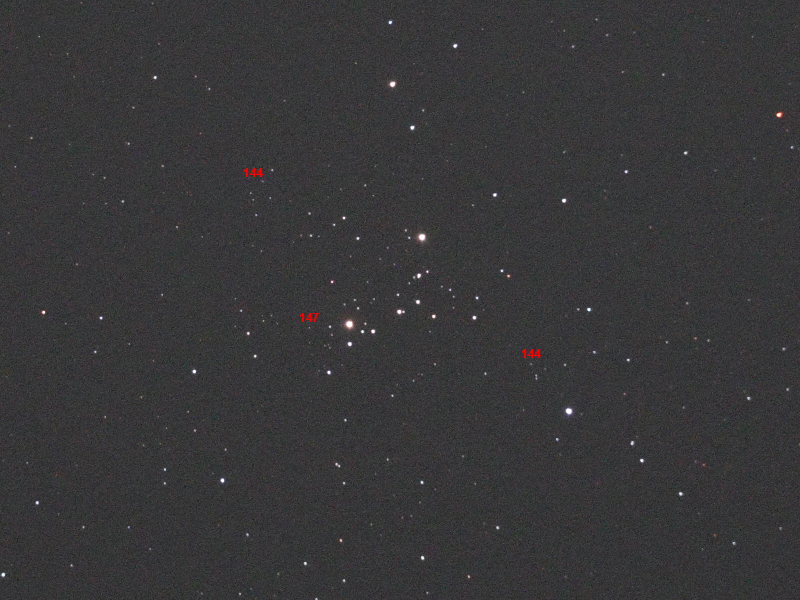 This is a single source frame without any processing. The RAW image was converted to TIFF using Digital Photo Professional. The image was cropped and labeled in Photoshop. No levels, no curves, no adjustments of any kind. I did use the in-camera darks and color balance, which is part of my normal EAA routine. I may have a chance to do better than this tonight. On this particular evening the humidity was very high and the transparency was about as bad as it gets, but it was the best that we’ve had in the past week. The limiting magnitude is at least 16.1. Note that the star on the reference chart given as 17.2 is not visible. 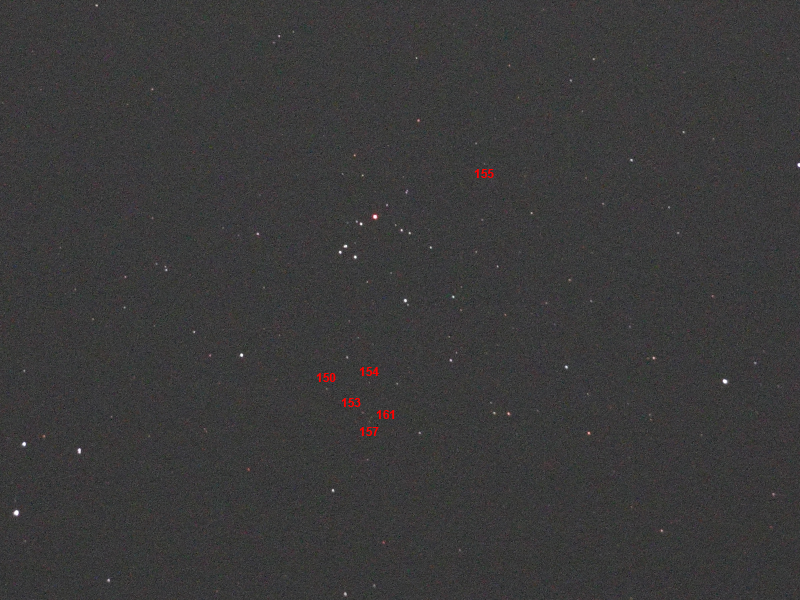 Here's my annotated effort from last night - both fields reaching the limiting V magnitudes [and fainter!] than the charts above. Used my Meade LX 200 30cm f/3.27 SCT+SX Lodestar-Cx2 colour camera - no filters used in 10s exp.

Based on this article, and given some scope data (aperture, central obstruction if any) camera data (mean quantum efficiency in relevant band, read noise, pixel size, dark current), it is possible to compute a limiting magnitude for a given exposure length and sky conditions. What the approach actually does is provide the signal-to-noise ratio (SNR) for a given target magnitude, so it is necessary to choose at what SNR you consider an object to be detectable. Let's use a value of 3.

Martin, Awwww your spoiling all the fun!

Seriously, thank you for the article, that's a very interesting read.

Here is an image I took of M57, reversed the color to get a black on white image. I Googled Photometry of the region around M57 and added the star mags. I used a ZWO ASI224MC camera and a Nexstar 6SE.