Considering purchasing one of these 8" Mak Cassegrains. Not much info available so I am looking from any information from those who may have had experiences with one.  I had a TEC 200 f/15 that I parted with and have since regretted doing so.

I have not seen one of these and do not know much about them.

But since long focus Maks are my top favorites for planets a few thoughts on 8” f/20 Maks.

The OMC comes in two versions, metal tube and 1/6th wave for about $7K, and a more expensive version in carbon tube and 1/8 wave for just under $10K, obviously these are not cheap.

Generally speaking F/20 Maks have a very limited appeal, TEC made some but stopped its production due to lack of demand and switched to F15.5, I have the very last 200 F/20 TEC made in 2002.

F/20 Maks appeal only to the hard core planetary fanatics, meaning if you buy one you will have a tough time selling it if for any reason you decide to go for something else.

If you find someone with OMC 200 ask about the cooling issues, the tube has a smaller diameter compared to TEC Maks therefore the light path comes awfully close to the tube, that is a potential red flag as far as cooling and internal currents are concerned.

Personally I prefer F/20 over F/15 variety for the simple reason that both have awfully narrow fields and if I am accepting this compromise I might as well go for something with the smallest CO which F/20 offers and F/15’s do not.

The contrast is up there, in my case the TEC offers better planetary contrast at high powers than my long focus AP155EDT.

BUT the cooldown times mite be a problem.  Years ago had a Russian 8" maksutov and it took at least 2 hours to reach outside temps.

I had the 1/8th wave OMC200 Deluxe and it was very sharp, giving planetary detail equivalent to a 6" APO when cooled.

Cool down however (even with the fans running) took a long time, if I could have mounted the OMC200 in a permanent observatory it would have been a keeper. 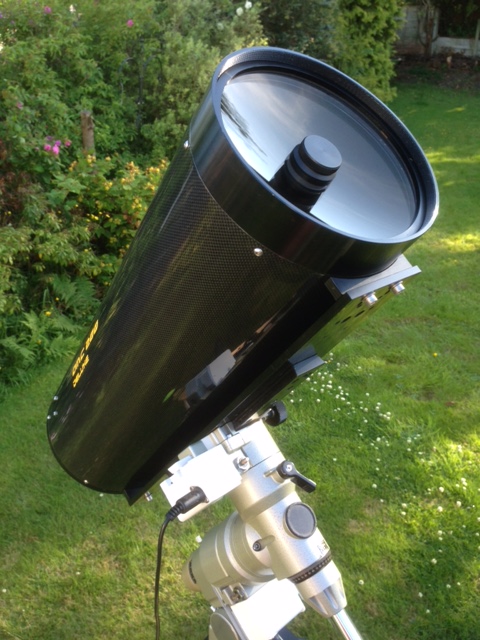 I had the 1/8th wave OMC200 Deluxe and it was very sharp, giving planetary detail equivalent to a 6" APO when cooled.

Cool down however (even with the fans running) took a long time, if I could have mounted the OMC200 in a permanent observatory it would have been a keeper.

I reckon my scope might actually beat out a good six inch apo on planetary and deep sky. I appreciate they are apples and Oranges with different focal lengths and image scales.

One consideration for apos is they nearly all have correction issues at the red end of the spectrum where a lot of good planetary detail is seen on the likes of Mars and Jupiter. There are exceptions but they are very costly.

Having said this I've yet to use my scope on Jupiter except in poor seeing. I also have found the fan is not necessary in my much warmer maritime climate.I live in Auckland, New Zealand 36.7 deg S.  My scope cools relatively quickly as it did for the previous Australian owner. It probably has a special glass Astro-Sitall?? for the primary.

Yes Lancashire will be a lot cooler and the difference between outside and inside might be substantial.

One advantage these Mak's have is they are relatively compact. 6 inch apos tend to be longer and heavier. I own a 5.1 inch triplet apo which is longer and slightly harder to mount then the Intes Mak.

I'd love to try one, but they are just way too costly on this side of the pond IMO.

$7k for a standard version.  Yikes.  There are a lot of very nice scopes available for $7k.

I'd love to try one, but they are just way too costly on this side of the pond IMO.

$7k for a standard version.  Yikes.  There are a lot of very nice scopes available for $7k.

They also have a narrow tube compared to the mirror diameter and are not internally baffled.

Larger Maks are now quite expensive. Perhaps because of low production numbers?

The Intes Maks in the larger sizes cost a lot.

An Edge 8" HD is like 1300 USD new from a typical US retailer, or 1070 GBP over here from Rother Valley Optics. I know the designs are rather different but can Orion UK really justify 6x the cost of the Edge HD 8" for the OMC200 ?

I find it's price rather frustrating, as I have a Meade 7" Mak and I like the Star images at high power from it so much that I am wanting to buy an 8" Mak. The Bosma 8" Mak is F12 and 33 per cent obstructed from it's conical secondary baffle, and Aberrator 3.0 Beta 2 shows that the performance on Jupiter is noticeably rather more contrasty with the 22 per cent CO (maybe 24 per cent by the time it's baffled) of the OMC200.

I would put up with going from 50x and 62' FOV of my C11, to 71x and 44' FOV (with my Meade 56mm Plossl), plus possible horrid vignetting (compared to my C11 and 7" Meade Mak) making it even more difficult to find things, just to get the extra planetary performance and beautiful appearance of double stars - for example it does have to be admitted that my C11 gives slightly "muddy" views with some scattered light and additional SA that my 7" Mak doesn't.

I can even still buy an STF 8" F10 Mak for 2300 GBP from Widescreen Centre, London, according to their website. Pity that the STF and Bosma are not more like F15 (the Bosma is closest at F12). I have been trying to find the Bosma 8" Mak for sale anywhere, without success so far.

Do not know how practical is it for you to buy used from USA but I would also consider 8” TEC Maks, they show up from time to time on Astromart for well under $5K, the most popular version is the f/15.5 and in quality department they are about the best.

You might be able to get more input about this scope on The Stargazer's Lounge, which is more of a UK-based forum.

so much so that the TMB was sold.