Hello all and welcome to Cloudynights!

This thread has been created for new members to quickly introduce themselves to the community and receive a warm welcome.

You will find that Cloudy Nights is a great place to exchange knowledge and information about all things Astronomy related.

If you have any questions, please start a new topic in the Beginners Forum and you will find that Cloudy Nights members are quick to share knowledge and our love of the hobby - we are here to help!

How about an "older" member returning from a hiatus?

It's been awhile since I last logged in (though it looks like my last login was within a year, I honestly think I was trying to discover the changes to the new site...which is probably not so new now...)

I don't really have an explanation for dropping off the site, it was a combo of too much time at work and with the kids limiting my time to hang on the site, so my access to the site faded...  Then I moved to Central Florida last year and haven't even unpacked my scopes!

(yet)  But clear skies around here are hard to come by (lightning "capital" of the USA = constant cloud coverage...

Anywhoo, I thought I'd drop a note and start off this thread as a good way to get "back" with the gang.

Welcome back, Jim. I hope you find some clearer skies around there.

Hi Jim and welcome back!!!

I am sure there are some clear nights here and there. Also, the moon is always a tempting target to keep one busy if there are clear skies yet the moon is up (=> no DSO).

Sam here. Not exactly brand new to the forum but I read more than I comment!

Fairly new member - pointed this way from the kind folks on /r/telescopes at Reddit. Thanks for making this a great site through welcomes and great advice and stories!

Hi Sam, soarrnwalk. Welcome to CN even if you've been lurking a while. Lots of knowledgeable folks here.

Welcome Sam and Soarrunwalk to CN, glad to have you here. Clear skies.

Welcome to CN! Nothing like mingling with like minded fellows and learning about our hobby, not to mention - which I am - new and interesting ways of spending your money on astronomy gear by reading through the forums and being "tempted by the flesh"

Hello! Newbie to the hobby here here with just a humble pair of binoculars.

Welcome, theblazingak to CN. Glad to have you here. Lots of helpful folks around here. Clear skies.

Certainly a lot to see with binos. We have some experts here in bino astronomy. Great to have you with us.

Hello! Newbie to the hobby here here with just a humble pair of binoculars.

Binoculars are nothing to scoff at! Head over to the Binoculars forum for some lively discussion and I am sure you will enjoy Phil's monthly binocular targets column!

Everyone was a beginner at one time, and even after 50 years in this hobby, I'm still learning new things constantly.  Binoculars are an essential part of my observing tools.

Welcome to CN, all of you!

Know that my fellow moderators and I are here to help you when needed, so don't feel shy about sending us a PM if you think we can help, as you navigate around the website.

Hi all, I'm new to this site and to the hobby, and I'd love recommendations on affordable binoculars or telescopes, and also any good reading material.

I would recommend you start a new topic in the Beginners Forum, for a telescope and / or binoculars recommendation. Any details on budget, how dark your skies are and what do you like / would like to view would go a long way to help people tailor their answers to what is best for your particular circumstances.

Welcome thegaze, so glad you've joined this great community. I don't give gear advice except for you to get what makes you happy. Good luck and remember this is supposed to be fun.

I've actually been registered here for nearly a decade but have only stopped by in spurts to read reviews and such. However, I've recently started to save up to get an introductory astrophotography setup that can also be used for some casual visual stuff.

To this point, my only experience with astronomy has been membership with the Cincinnati Astronomical Society and a general interest in science and technology. I've never actually owned a scope, and I've only dabbled in wide field sky shots with my DSLR. I've been into landscape photography for nearly a decade, and I'm really starting to get excited about the potential in night exposures.

It wasn't until visiting a nice dark sky location in South Dakota that I really sparked an interest in actually getting a scope. I'd love to have one for viewing and practicing astrophotography in Cincinnati as well as taking it with me when I go on future trips to national parks and other less light-polluted places. This place has been a great resource to learn by lurking and reading, and now I think it's time to start asking for some advice as I delve into researching my first scope.

Nothing like being under dark skies to spark the passion in a person!

Welcome (back)!!! I suggest the Beginners forum to ask a question. Just be patient with all of us because you will get a ton of advice!!!

I'm a Canadian astronomer, originally from Brazil, now living in Montreal. I've started as a toddler but never managed to get a decent scope. All I used as a kid were cheap binoculars and eyes - although I do recall drawing constellations when sneaking in middle of the night and climbing to the roof of my parents house!

Last April my wife got me a 4.5" newt as a graduation gift, which I've decided to boost up to a 10" dobs from Skywatcher when I came to get a job in Montreal... Which I did a few weeks ago

I'm now a proud owner of a Skywatcher collapsible dobs, and it's a thing of beauty!

My view is currently the narrow and very well lit balcony of my building, facing the city (meaning more light). Star hoping is a challenge that has to start with +0 mag stars and go from there. But I'm working on mobility plans!

I have been reading this forum on a daily basis and I do appreciate everyone's inputs and help. Today I've finished a few light hacks to the scope, but I will post photos later.

Hi Marco and welcome to the (drum roll please)

I've been registered for the last several years, but haven't been able to get a telescope until just recently. I'm from Utah, and have been into astronomy since I was a child. I rarely had a scope to view with, but not I'm getting my own children into the hobby.

Last week I finally got my first scope, an Orion Skyview Pro 8 inch Newtonian Reflector. The mount isn't the best, but at some point I plan on upgrading the manual mount to a Orion Atlas or Celestron CGEM mount as I would like some day to get into Astrophotography.

In true fashion, I've had 2 non-cloudy nights so far since assembling everything, but it was enough to view the moon the first night, and Saturday night I was able to get my first view of Andromeda Galaxy as well as M32 and M110. Truly magnificent to behold, especially since the last scope I looked at these through was a 4.5 in reflector. This light bucket shows fantastic detail.

Anyway it's good to be here, and to finally have something of my own to view with.

Throughout my adult life I rarely visited the night sky let alone viewing it though an telescope, I always wanted one though and now I got one. It is an Empire model 653 f=700 ? Universal .And I know nothing.   When I was an child I would spend most of my nights even on school nights outside in the woods camping along an lake about 2 miles away from everything and anyone. I spent my time fishing, star gazing and dreaming about life's problems, growing up, girls, and whether or not we are alone in this universe. I remember the the reflection of the stars would dance as my bait hit the mirrored lake surface and I would sometimes play with the line just to see them dance. I would play games with the stars trying to destroy them with my bate as meteors. Sometimes I wouldn't leave the lake till first light and catch up my sleep in class (actually most of the time i would sleep in class

). But anyway as my overjoy on finding this dream(owning an decent telescope) I with very sad heart  have to get rid of it so my next meal isn't out of an trash can.

I was given It for work performed (from a man that looks suspiciously like Santa). Its dirty seams to be all there but not sure because I know nothing about them. I would like to know what a fare asking price for one 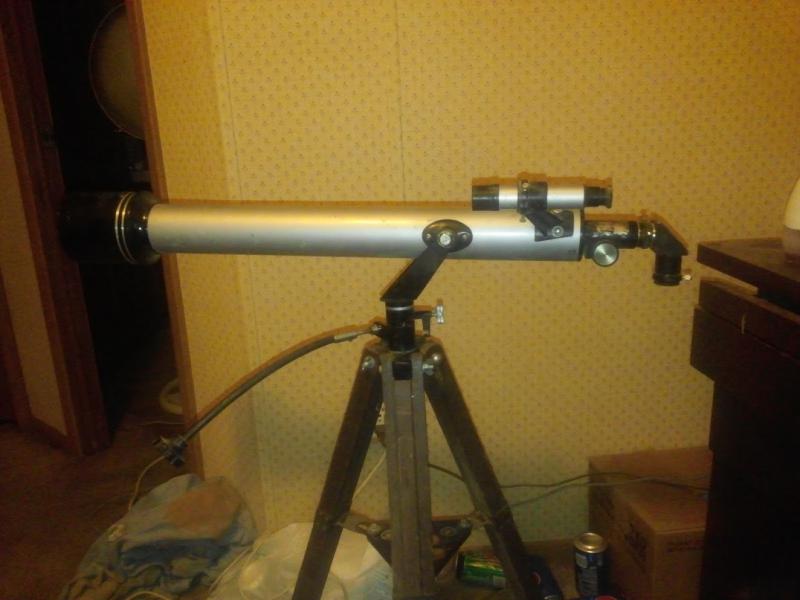 Whoa, we have a lot of new meat!

A big welcome to dqniel, marco, hatchna and billfarly. Great to have you here in the cn family and we are a family from all over the world. There are a lot of interest specific forums for your enjoyment. A great many helpful and knowledgeable people to bounce questions off of, if you have any. Don't hesitate to talk to the mods if you have a problem. We have a great wealth of diversity, likes and dislikes. Because of this we might disagree from time to time but don't take those things personally. Enjoy your stay, we're all glad you've come.