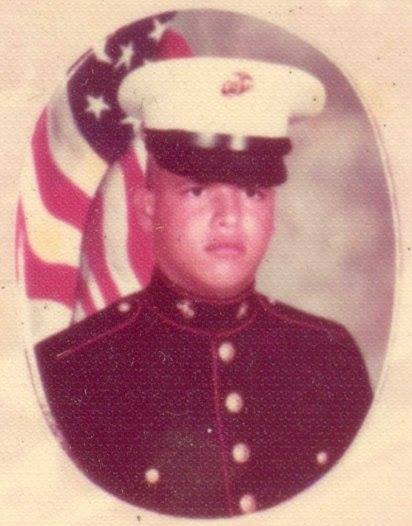 Build your own Bluetooth interface

About two and a half years ago I started working on a little project to build myself a bluetooth interface for my Celestron Nexstar. I succeeded in doing so, and designed a small device around the JY-MCU bluetooth board that can be bought cheap on the web, for between $2 and $6, depending on where you buy it. One parameter for my design is that I wanted it to draw power from the mount, rather than have to plug it in to a wall wart or use a battery.

I thought about taking it commercial, but in the end I had too many other things on my plate so I set it aside. For those of you true hackers and tinkerers, here's the schematic. It's dirt simple to make, and a lot cheaper than the commercial stuff out there (I think this can be built for under $10). This particular version is for Celestron hand controls but can be easily adapted to any other mount that provides power and has a serial port interface. Enjoy.

Remember to test it before plugging it into your mount. I don't take responsibility for any smoked mounts.

And yes, it can probably be improved... The schematic is free to use for non-commercial purposes.

P.S. I'm surprised Meade, Celestron and other manufacturers don't build this functionality into their mounts. It's not rocket science and would only add a few bucks to the cost...

Looks interesting. What does it do?

I wish I understood more as I use Bluetooth exclusively with my mounts for SkySafari.

I was able to make my own interface cables, but this looks a little beyond my capabilities.

Great work Juan.  I use something similar, a board from Japan with the Max232 chip already on it.  Just had to fab a cable from the Sky Commander to the serial to bluetooth board and I was in business with SkySafari Plus on my tablet.  Haven't had a chance to take it out yet though but it works great so far.

Richard, Juan has built a device that takes the serial signal from the Celestron, changes the signal level (the 232 chip) and then sends it to a module that converts it to bluetooth that talks with his computer or tablet.

Mike, it's not complex if you break it down into small chunks when you're building it.  Here's a board that's already put together, I used one like this.

Hi Juan, did you consider one of the Bluethooth modules on Ebay? Go to ebay and search for "RS232 Bluetooth Serial Adapter Communication Master-Slave module mini USB"

You can get it for less than $10. The module includes the bluetooth module as well as the RS232 interface module. In my case, bought one of these modules then bought a battery, few cables, a nice switch, RJ11/R232 adapter, and finally a nice case. Put it all together. My total cost was ~$30.

I have a thread about it: 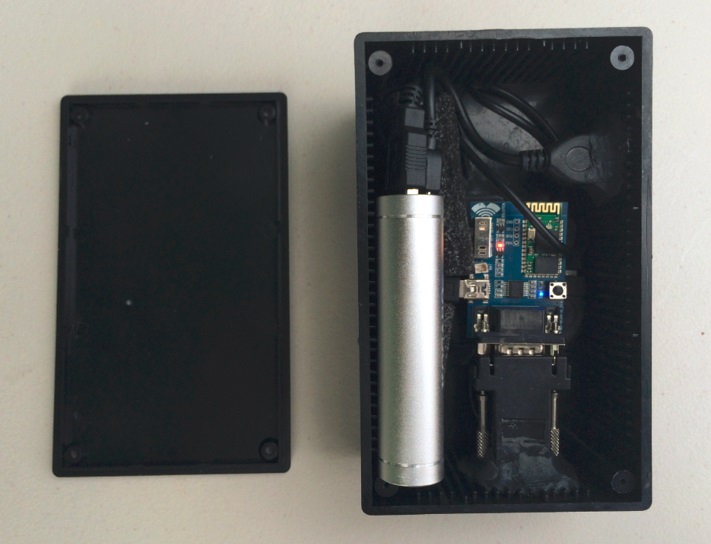 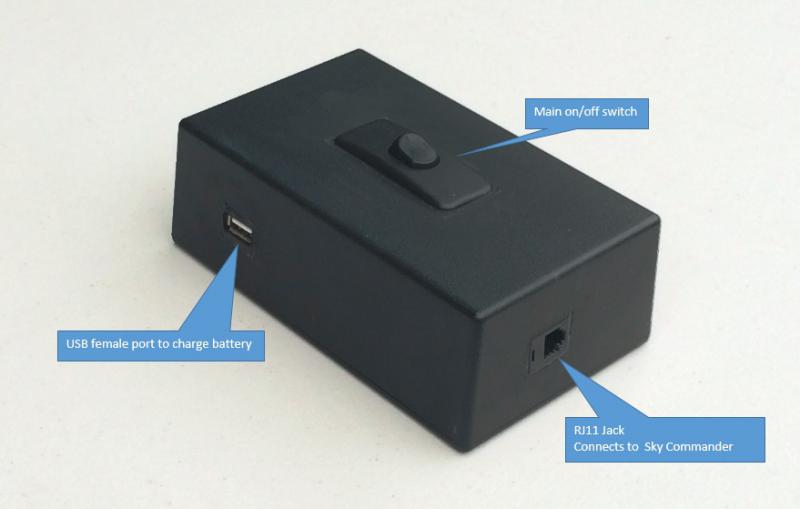 By the way, why do you have the 12V voltage regular input connected to two 12V sources? Is it because you were not getting enough power from a single source?
Jason

Looks interesting. What does it do?

It connects any device with bluetooth (smartphone, computer, tablet) to your mount as if you were connected with a serial cable. You can then use software that can talk to your mount to control it, like SkySafari, for example.

Hi Juan, did you consider one of the Bluethooth modules on Ebay? Go to ebay and search for "RS232 Bluetooth Serial Adapter Communication Master-Slave module mini USB"

You can get it for less than $10. The module includes the bluetooth module as well as the RS232 interface module. In my case, bought one of these modules then bought a battery, few cables, a nice switch, RJ11/R232 adapter, and finally a nice case. Put it all together. My total cost was ~$30.

By the way, why do you have the 12V voltage regular input connected to two 12V sources? Is it because you were not getting enough power from a single source?
Jason

Always more than one way to skin a cat. Nice.

As to the 12v... If you understand how the Celestron mount works, that's not two 12v sources, it's just a passthrough to pick off the 12v that the mount supplies to the hand control in order to power my circuit. You unplug the cord from the hand control, plug it into my circuit, and get yourself another cord to plug the other jack into the mount. The other port connects to the serial port at the bottom of the hand control.

Oh, and BTW, I'm sure someone will ask if this puts too much of an electrical load on the mount. It doesn't, it uses very little power, in the range of milliamps. Even if you use batteries to power your mount, it should not reduce the time the mount can operate on the batteries by any appreciable amount.

I also have a design for a surface mount board, 1.5" x 2". But I think that's for commercial use. If you're interested in that, let me know and we can talk.

I was asked for a parts list, so here's the dirt simple version.

If you Google for "JY-MCU" you'll see plenty of options where to get the bluetooth board. Everything else is stuff you can buy inexpensively from places like YouDoIt Electronics Center, Digikey or Mouser.

Cool project!  I thought about using Zigbee radios to do something similar for connecting my laptop to the mount wirelessly.  This is a much cheaper alternative though

BTW, I've tested this with a Macbook Pro but I've never tested it with an iPad or iPhone. I've been told that thanks to the stupidity of Steve Jobs, it might not work because iOS does not have the profile for Bluetooth serial port emulation. You can only get it if you include a special encryption chip in your hardware. If one of you can get it to work, let me know. I'll send you a case of good German beer.

FWIW, for Apple devices, the solution is to use WiFi and run a simple TCP server instead of Bluetooth.  The ESP8266 is a relatively simple (supports the Arduino dev environment) & cheap solution ($6 on eBay).

Nice! That is indeed a very appealing solution, but it seems a lot harder to run and configure than the JY-MCU. With the JY-MCU you don't need to configure IP or anything like that, you just pair from your client device and you're done. Nothing else needs to be done on the mount side other than plug it in, at least the way I designed it.

Oh well... I guess if someone wants to pay what Apple charges to get on the program and get the chips, I'll modify the design for that if necessary... I have no reason to do it for myself. The other solution is a cheap Android tablet or smartphone with Sky Safari, which is an outstanding piece of software.

It's not too bad.  The ESP8266 can be a WiFi access point and run a DHCP server.  So you just tell your iPad to join the wifi network and tell it what TCP port to use.   Here's an example program for the ESP which pretty much does what you'd need:

Oh, but you need an Arduino for that! That blows the budget out of the water!

Nope.  The ESP8266 is Arduino compatible and is what runs the code on it's own.

Oh, so that little board -is- an Arduino-compatible single board computer? I've seen them for $2 already. That's wild.

What I really want to do next is an RPi-based autoguider. Too bad I have to make a living, not enough time in the day. LOL!

RPi zeros are $5.  I was lucky enough to snag one and it seems like a pretty nice and very compact solution.

Yeah, not just a simple Arduino, but Arduino with built in WiFi.  Crazy to think that an RN-XV board (just the WiFi) is $35.  I need to update my TeensyDSC project to use the ESP8266, but haven't had the time to do so... not to mention I already bought an RN-XV for it and it works just fine.

Hi there  all.  This is very similar to a project I started this weekend. But rather than use a TTL to RS232 converter, I've been trying to use a Bluetooth module from Sparkfun to interface directly with the AUX port on my Nexstar Evolution mount to improve the wireless range over the built in wifi. My hope was to run everything from the single port and control the scope via Skysafari.

The Sparkfun board level shifts the 3.3V TTL from the actual Bluetooth module to TTL levels set by an external voltage supply. I'm using the same +12V to +5V regulator as above so the serial signals match the 5V the mount needs. Everything powers up and I can connect to the Bluetooth port but the telescope connection doesn't work. I've only had the scope for a few weeks so I'm still learning the ins and outs of external interfaces to the scope. My hand controller also locks up when I have the RX line on the AUX port connected to the Bluetooth adapter. With just the TX connected I can see packet traffic when manually slewing the scope.

Digging through all of the forums, documentation and articles I can find has been a bit overwhelming. I may not actually be able to control the mount directly through the AUX port after all but worth the shot and learning more along the way. If anyone has any additional info using the AUX ports and Skysafari, I'd appreciate it!

The aux port is the same as the hand control port and is not intended to be used to control the scope...

It seems like this should be possible because the SkyPortal Wifi Adapter from Celestron connects through the AUX port to provide Wifi control via the SkyPortal app. All I was hoping to do was replace wifi with BT.

That means that device is probably emulating the hand control, rather than implementing the serial port protocol. If you want to do the same you have to reverse engineer the hand control interface.

Back to Equipment (No astrophotography)