Have checklist in hand and am checking everything out to make sure it works. Can't wait to get there. Will be coming in early, probably on the Saturday before.

Looks so far like the weather will be cooperating this year. I always try to come a few days early. Hope no fires start this week or next. I am bringing everything including the kitchen sink this year.

I need a checklist. We forget the dumbest things.

I'd be lost without a checklist.

I have a few different ones, depending on what I'm doing.  OSP has the longest one because I spend more time there than any other star party, and tend to take more equipment.

This year it's complicated by the fact that I've had to make some changes to my diet for medical reasons.  I've planned all of my meals for the entire stay and spent all day yesterday in the kitchen preparing and packaging meals for the trip.

I'm about halfway done packing the motorhome and will finish up by tomorrow evening and will then head out to be up on site before the weekend.

The good news is that once I get set up on site, I'll have about 10 days to just relax and enjoy being up there.

Well, I've run into a snag that could potentially be a major deal.

The refrigerator in the motorhome is not lighting on propane.  Without that, I will lose nearly two weeks of meals and be pretty much dead in the water.

It works on A/C, but when I switch to propane, I don't hear the igniter and it doesn't light.  This could be fairly simple or it could require a replacement board (or worse) for the refrigerator.  I'm not an RV refrigeration tech, so I need to get someone to look at it.  It is nearly impossible to get someone to look at an RV on short notice in this area (the place where I normally get the motorhome serviced runs about 6 weeks out this time of year), so I'll have to start calling first thing in the morning to see if I can convince someone to take a look.

I just had everything serviced, including the refrigerator in the spring, so the motorhome would be ready.  So much for planning ahead...

The refrigerator is fixed.  It turned out to be a bad controller board, and it has been replaced with a better-than-new board and is working great.

Now I can reload the refrigerator, finish up with the last minute packing, and get on the road.

Here's looking to some clear, dark, smoke free skies for the next week and a half!

Hope you guys have great year down there!  We are all due some clear smokeless skies up here in the PNW!

Glad you got your fridge fixed!  Have fun & Clear Skies!

Anybody get word yet on the generator policy this year?  Nothing on the site except they won't know until a week prior.

Putting the final touches on the packing. Can't wait to get going. Will be getting there Saturday afternoon.

I'll pack the night before and head up early Tuesday morning. I'll pick up some more sand bags and make more cleat disks as tent stakes are useless up there. Next year (if I can get in) I'll take an extra weekend off so I can spend more time up there.

Leaving for OSP tomorrow on a flight from DCA to RDM. I feel like a pack mule with all the stuff, but am looking forward to some hot photons on some clear cool OSP nights.

I've decided not to go this year. Pity as I've prepaid and the registration is going to waste. Worked Sunday all night and couldn't get any sleep Monday due to family obligations. It's an awful lot of work tent camping on rock in this windy area. Too pooped to care right now.

Another one in the books, received level 0 and 1 but did not finish 2, maybe next year. Had a great time and have posted many photos at this link. For now this is one of the moon that turned out ok.  Needed to lower the ISO some. https://www.facebook...&type=3  I also posted this info in OSP2017

Had a great time.  Friday was clouded out for the most part, but we had a great lightning storm to watch (from a distance).  The weather was otherwise pretty nice--not too hot and, after the first night, not too cold.

I had planned to do the levels 2 and 3 lists, and started work on them, but I was having more fun looking for other things and gave up on the programs.  It didn't help that I ended up chipping off part of the formica on one of my altitude bearings and couldn't take the scope below the altitude of, say, Saturn.

I corralled a number of flat galaxies from the UGC catalogue, several Palomar globulars (unfortunately almost all ones I'd seen before, as 5 eluded me every chance I went for it--I did finally catch 11, though), some great galaxy groups (NGC 80 group, NGC 200 group, Abell 347, Zwicky's Triplet, several trios in Lacerta, and some really great views of the Pegasus I cluster), Uranus, Neptune, IC 1613, the Wolf-Lundmark-Melotte galaxy (before I broke the scope)... I'm forgetting a lot.

Next time I take a tent.  I slept in the back of my minivan, which eventually got uncomfortable.  Although by not taking a tent, I didn't have to worry about the giant dust devil that tore through on Thursday (Wednesday?) and knocked over a few scopes and shredded some tents and canopies.

Oh, and I won a door prize!  A giant coffee table book for which I had to show proof of ownership of a large coffee table

I would go next year for sure, but I'll be in Carbondale IL visiting friends and helping out with that eclipse thing everyone's talking about. 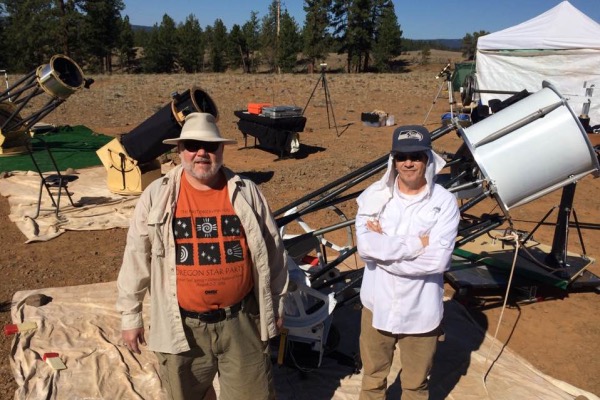 Had a great time with my brother.

Now that everything we took to this year's Oregon Star Party has been washed, dusted off, and packed away, the OSP committee has a few lost items. If you believe one of these items is yours, please go to the Contact Us page at our website: