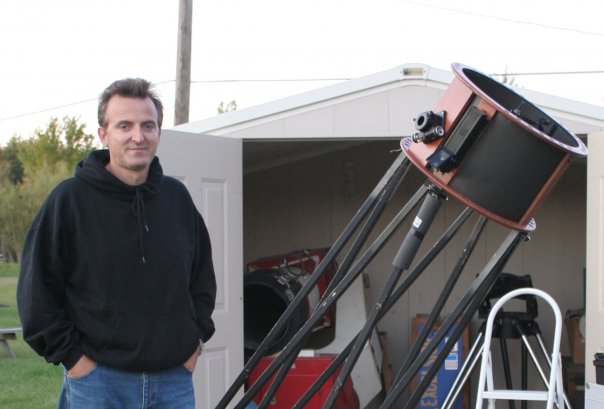 What did you observe with your classic telescope today ?

We should make a separate thread about it now.

"We should make a separate thread about it now."

As we say Down South, you name it, you claim it.  I'll be happy to litter your thread with my observations!  Honestly, I haven't thought about the Transit, because odds are it'll be weathered out.  And, I just made arrangements with Majestic to recoat the Tinsley's mirrors, and I get tunnel vision.

But I do think a 60mm Classics thread is cool - small scopes doing big work!

Interestingly, such singlet refractors with +1D spectacle lenses were the usual beginner's scope here in Denmark
for many years, only ending in the 1950'ies with ...The eyepiece was often a 10x loupe, which, as we know,
has 25mm focal lenght, giving 40x.

I remember Jupiters moons and the very colorful moon craters..., --

I would like to make a question to everybody : do you have any plans to observe with your classic telescopes

Sure, I'll be out there (weather permitting) with my Lunt 60mm Ha-refractor

For the May 09 Mercury transit I am taking the day off ..

For imaging I will setup my 100mm ED refractor.

For  (public) I will probably use the Monolux 4380  on the Omni XTL mount for tracking.

...and here is the sketch of the observation above, did I get the cardinal directions right as they appear in a refractor with prism diagonal? Thx

Interestingly, such singlet refractors with +1D spectacle lenses were the usual beginner's scope here in Denmark
for many years, only ending in the 1950'ies with ...The eyepiece was often a 10x loupe, which, as we know,
has 25mm focal lenght, giving 40x.

I remember Jupiters moons and the very colorful moon craters..., --

I would like to make a question to everybody : do you have any plans to observe with your classic telescopes

Sure, I'll be out there (weather permitting) with my Lunt 60mm Ha-refractor

I vote for a vintage 60mm refractor thread. that would be cool.

I would like to make a question to everybody : do you have any plans to observe with your classic telescopes  the transit of Mercury across the Sun , going to happen on 2016 May 9 ?
If yes ,which gear ? Method? Resources,books,links ? Any special project ? Is it possible a group project ?

I do plan to observe it, if it is clear. Equipment not yet decided upon. No special projects planned.

Maybe we could make it a "60mm Club" observing event? Any ideas?

I watched the Nov. 1999 Transit of Mercury in white light with my 60mm Mayflower. I will watch the next one with it too and watch it in h-alpha with my Coronado scope.

After another row of overcast and stormy nights (sigh), there was a break in the clouds this morning

Here's my fast sketch of the planet align, as observed naked eye and with my GG 50mm Teleminor. 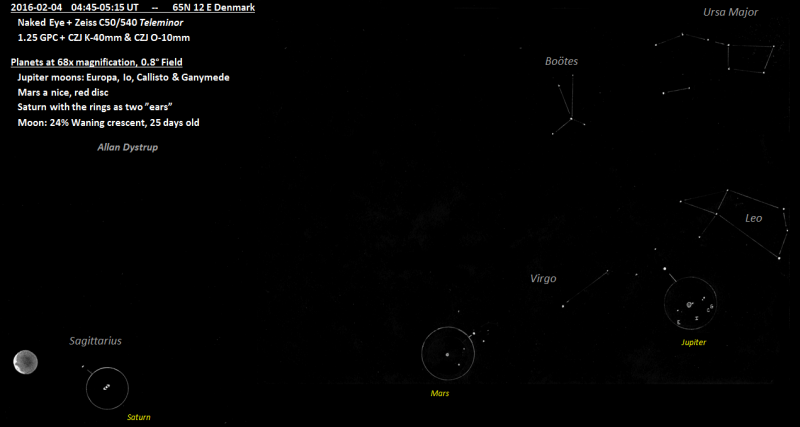 After ½ an hour, the clouds closed in, and anyway Dawn was already stretching her rosy fingers
up towards Luna, so no chance of spotting Mercury and Venus this time.

Allan did you use some type of program for that cool sketch? And you say it was fast!

I'm "observing" the paint wrinkle as it sets, on another set of Manon castings.  Clear skies yesterday but overcast and snow predicted today.  Keeping my fingers crossed for the weekend.

I observed my telescopes

Allan did you use some type of program for that cool sketch? And you say it was fast! 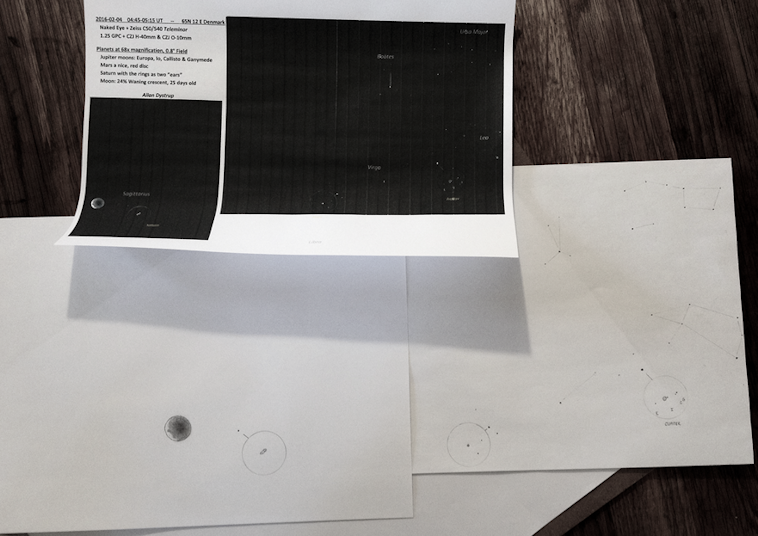 Afterwards I patched the two sketches together and inverted most of the image (not the Moon),

PS: for the patching, yes: I used the Photo editor : PaintShop Pro

Inverting the images gives it more of a "night view"

Saturday ,  6 of February , I made observations again with the one foot refractor of 15mm aperture F/ 32 at 9x / built in Keplerian ocular.

I started with Messier 41 in Canis Major were I saw four stars out of about one hundred in this cluster.

The most conspicious of the four visible stars  is a red giant of spectral class K3.

Comparing my drawing with the Toshimi Taki-Wehner ''Double Star Atlas'' I recognised the star located at South-East as being 12 Canis Majoris and a pair of stars located to the West of the cluster.

The four stars visible with direct vision were seen immersed in a well visible haze of light , an indication of the many stars not resolved by the small telescope.

At Pleiades I counted 30 stars , this being the best star counting yet made with the primeval refractor.

You remember a triangular asterism consisting of three stars close to the brightest star in Pleiades ,which is Alcyone.

To my delight , the brightest star in that asterism was visible also .

In the ''Praesepe '' M44 star cluster I counted 18 stars and a translucent glow showed there should be more ,unseen stars.

Next was on the list Messier 37 in Auriga ,seen as an hazy object ,without clear shape and structure except a slightly brighter center.

However ,with averted vision , the core of the cluster seem to be brighter on the S-W to N-E direction.

Latter , when I visited the same cluster with the 60 x 828 mm refractor I learned that brightening of the core was due to two bright stars.

On every occasion , when I;m rambling through the clusters of Auriga , I don't forget to pay tribute to Giovanni Hodierna.

In a time when for most astronomers to observe  the Great Nebula in Orion seemed something awesome, Hodierna discovered scores of Deep Sky objects.

The only one telescope  used by him we know about is a Galilean refractor with a magnification of 20x.

Many of his deep-sky objects proved to be just asterisms and others are impossible to identify with certainty.

But 20  highly celebrated deep-sky objects ,if not 25 , were discovered by Hodierna.

Of the ones observed by me on Saturday , Messier 41 , Messier 45 , Messier 44 and Messier 37 were all discovered or listed for the first time as deep-sky objects by Giovanni Hodierna.

This seem natural to me .

And this is the reenactment purpose for which I built and use such small singlet telescopes.

I had a look also to Jupiter were I noticed two Galilean satellites  to the East of the planet.

One dimmer ,at two Jovian diameters distance , was Ganymede.

One slightly brighter , at about seven Jovian diameters distance was Callisto. 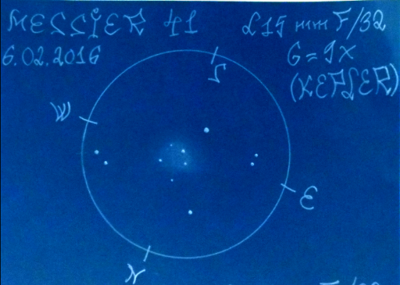 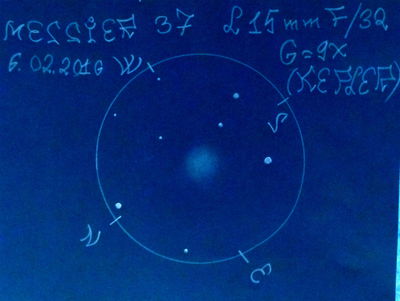 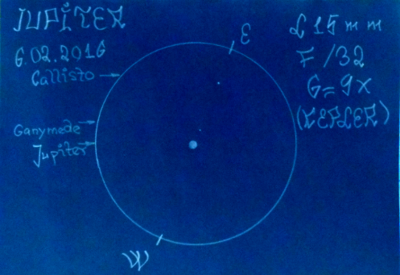 Clear sky to all , Mircea

A more extensive biography, but youv'e got to read Italian!

Skies here in San Diego are really clear and dry and I was able to see M104 very nicely complete with dust lane, a glimpse of the brighter core of NGC4565, decent views of M65 and 66 in Leo.  I also looked at M3, M5, and M13 and all looked great with really nice resolution on M5 and M13.  M3 is more dense and less well resolved at 100x with my 20mm Erfle.

Moving on to the planets, Jupiter looked great and with my 12mm and 9mm Kellners, I had a nice view of the shadow of Io and the transit ingress for the moon itself, seen as a little pearl against the darker limb of Jupiter.

Mars at 7 arc seconds showed a hint of the polar cap but not too much else and was low over my house roof.  Saturn was nice with the rings wide open and Cassini's division seen, but it was low enough for atmospheric dispersion to be very noticeable.

I also played around with the Nikon 16x56 Monarch 5s I picked up really cheap at Yodobashi in Osaka.

All in all, a nice early am session, but time to get ready for work now.

Jupiter, Mars, Saturn, Venus, Mercury - and Earth, in a Meade 320, 80mm by Mizar. This was a test for the scope since being refurbished. I chilled it in the garage for the night, it was freezing this morning. The mechanics worked excellent since I worked in a few drops of light machine oil on the Dec and RA axis. Slo-Mo floppies were great, axis locks held with smooth action and no shift in position when turned. The Mizar mount is a nice piece of work.  I had to rush the view to get them all in, and since this was a test I only used two eyepieces, a Meade (nostalgia) series 4000 Japan 32mm and 6.4mm for a push. Best views would have been about a 10 to 13mm.  I had to slam these as I used both eyepieces on each, back and forth a couple of times, and wanted to do a sweep from Mercury back to Jupiter before closing which worked.

Jupiter was a matter of clear banding with only two moons in the field with the 6.4mm.   Clean break on Saturn rings which were surprising considering the skies, certainly no division. The rings were pretty nice. Mars tried to do some caps but I'll only go so far as to say averted imagination for the whitey edge. Venus and Mercury were both in a wash and since they are both gibbous they didn't give much form. However, I did get distinct disc compared to focused stars.

A star test with the 6.4mm gave a distinct diffraction ring at focus but it was broken and wavering from the seeing. Inside/outside focus wasn't going to reveal much.

I'm pretty darn happy with this scope. What a great morning experience with 6 planets.

I tried to split Struve 750 with my 60mm x 700mm Mayflower 814, but with most of my eyepieces in FL, I only had a Nagler 13mm for 54X and the 8.5 mag secondary was at the very limit of my visibility from San Jose with this setup. In mid-March I'll try again from FL with the Unitron 114 and the 5mm Nagler (or Pentax XO ).

However, I did get a lovely view of Jupiter before carrying the scope to the elevator and back up to my flat. That got me over the disappointment!

Thank you for your appreciation !

Thank you DMala for the link ,it is very good article , I read currently Italian.

At age 21 ,after reading the book ''Meteore'' by Agostino Nifo  and after building a simple quadrant following instructions in the book ''Sfera del mondo'' by Alessandro Piccolomini,

Hodierna made observations of three comets in two years (1618 and 1619) from the tower of Saint Nicola church in Ragusa.

(By the way , this is reminding about my DIY quadrant ... haven't used last year at all...) 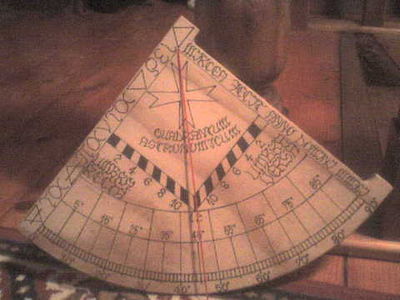 I have observed a room full of Unitrons

they would be pcitures of boxes.