Started by Special Ed , Apr 18 2016 10:35 AM
This topic has been archived. This means that you cannot reply to this topic.
6 replies to this topic

I observed the Red Planet this morning with my big CAT under very good seeing conditions--what a treat!  When I centered Mars in the finderscope and put in the 40mm ep (98x), I could see that the air was quite steady.  Not trusting that it would last (it actually got better), I quickly increased the magnification to 230x and then 326x.

After studying Mars for a few minutes at that power I got out my 8mm Burgess/TOB ep (which I never get to use) and bumped thing up to 489x.  That proved to be a little too soft so I moved down to 391x which was the sweet spot (good image scale, too).

What really stood out on the ruddy Martian disc was the large orographic cloud over Elysium.  This is a highpoint on Mars with a volcano (like the Tharsis volcanoes) and often has clouds but I've never seen one over Elysium that was so distinct.

The South Polar Hood as well as Hellas (which was just rotating into view) were also covered with bright clouds.  These were bright with the green #56 filter indicating that ice or frost were present.  The morning limb was bright with the red #23A filter so some dust was probably present in the CO2 or water ice clouds.

A first for me was seeing the Gomer Sinus which popped in and out a couple of times.  It appears like a pair of fangs hanging off the northern edge of Cimmerium.  It's also where the Curiosity rover is located.  You can't see it very well in my drawing.

A little bit of Utopia was visible along the northern limb but most was obscured by the limb arc/haze.

Mars can take as much magnification as the seeing will support, so if you get good conditions crank it up and enjoy the view. 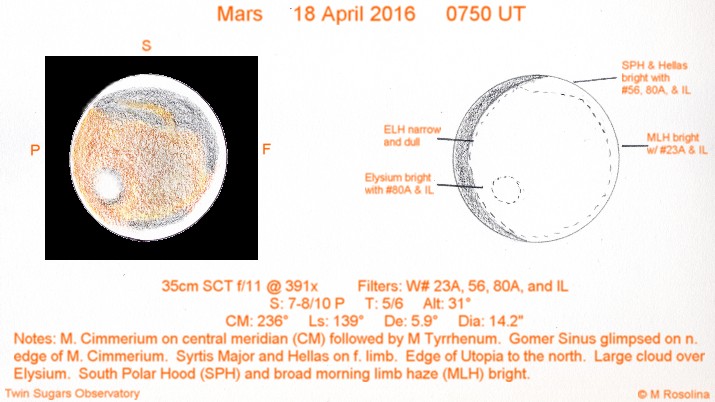 This is an excellent sketch of Mars. The very bright cloud over Elysium is very dramatic.

It is large enough now for good views.

Good detail in the south.

Thanks, Frank--and thanks for the likes everybody.

Michael, I observed Mars at about the same time as you did and my views were similar. Also saw the cloud cover over Elysium and I saw some morning limb haze but not as much as you did. Surprisingly I was able to view the NPC which popped in and out of view. Seeing was a 7/10 and I was able increase magnification to 348x with my 10" refl.

That's cool that you were out then, too.  Wasn't Elysium impressive?  That cloud looked like a big cotton ball to me.

I wonder how much that limb arc I saw was a contrast effect.  I did have pretty high magnification, tho.  No sign at all of the NPC for me--it's pretty small and that limb arc curved all the way around to the terminator.  Did you see any of Utopia?

Terrific sketch and report, Michael! I love coming to this forum, as it always inspires me to get out and do a little sketching.