The inspiration for this project came from Mr Bill and his Bino Box thread from a couple of years ago. Thank you Bill for your advice and inspiration.

My version is compromised in that the IPD is fixed. This makes it possible to use only one mirror per side. I have used the same lenses as Bill, Istar 5" f5.5 achromats. There is a 1.52" minor axis diagonal mirror on one side and a 2.14" on the other with the lower lens. The focusers are Baader helical units with only a few millimeters of travel.

Initially I will be using 24mm Panoptic eyepieces and if I want to try different ones then they will need to be more or less parfocal. This will include most Tele Vue 1.25" eyepieces.

With the 24mm Panoptics the magnification is 29x. The exit pupil is 4.35mm. The field of view is 2.21 degrees. As you can see it is a work in progress and subject to change! 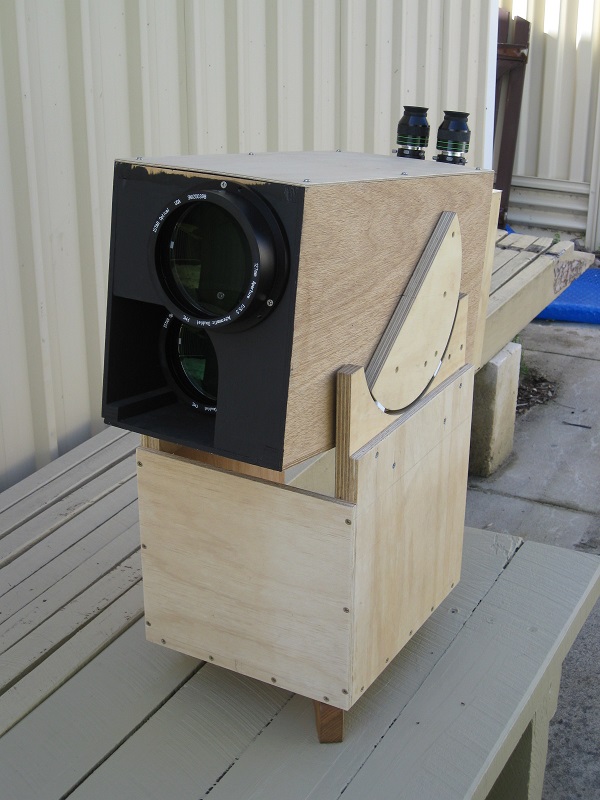 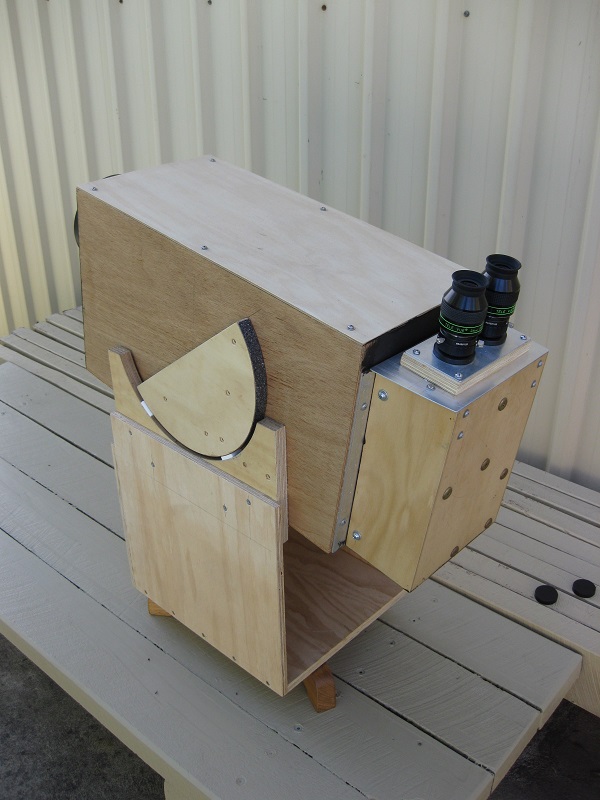 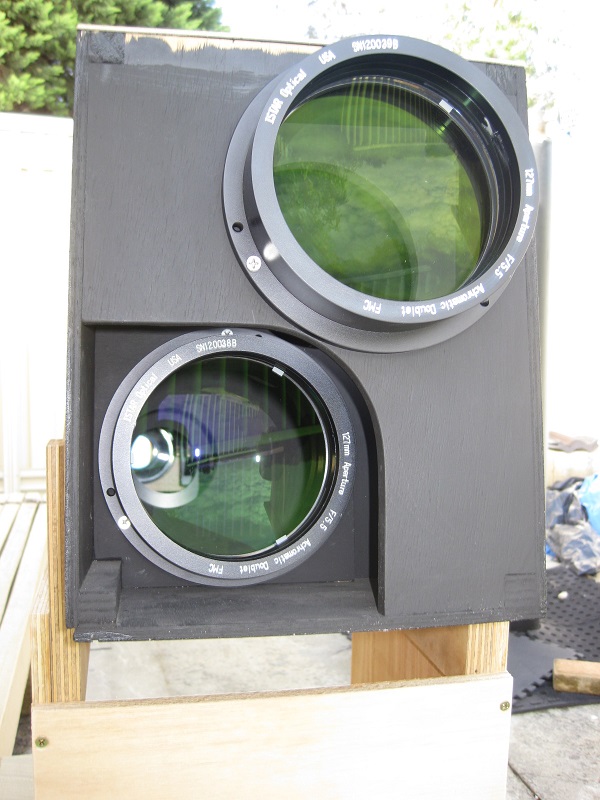 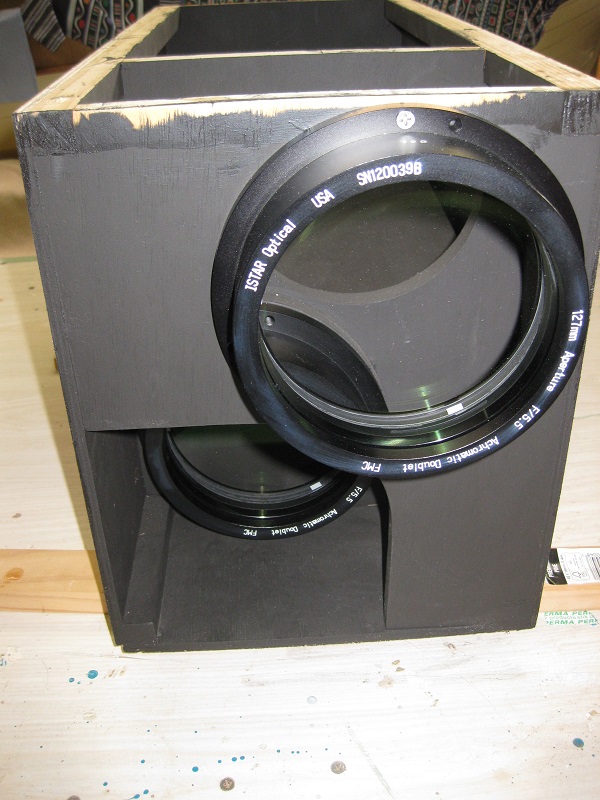 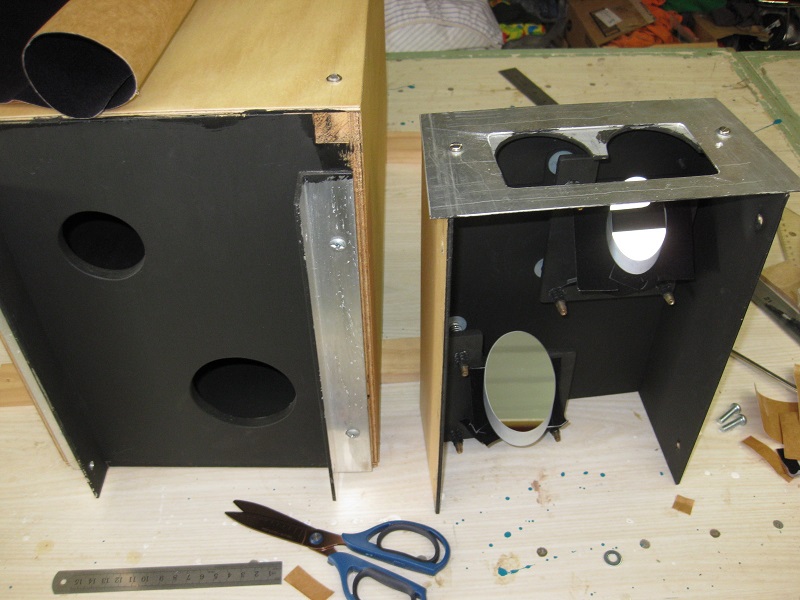 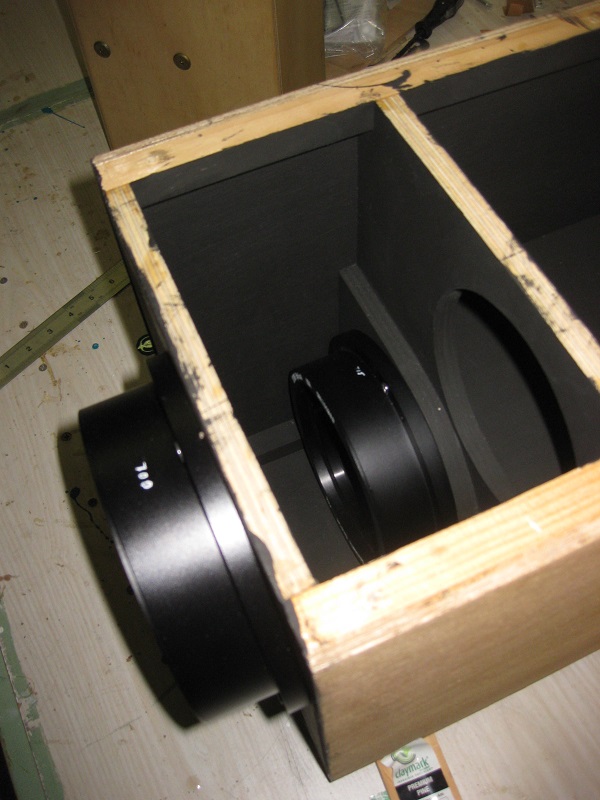 Wow, Looks Impressive!  What about viewing at Zenith?

Well I might make a tripod eventually. It is still at the proof of concept stage. It is about as simple as it gets for a large binocular.


A few mm is hardly a focusing mechanism. Even diopter adjustment has more travel...

Excellent....I would suggest putting a partition between the light cones to eliminate any chance

How do you collimate with box closed?

The intra collimation can be accomplished with the objective cell push/pull screws.

Also, the 19mm Pans, DeLite eps, and 13mm Nagler are all parfocal so the 24mm Pans is a good choice.

How did you calculate the mirror sizes to optimize off axis illumination?

A few mm is hardly a focusing mechanism. Even diopter adjustment has more travel...

Obviously not for star parties but great for the owner.

TV eps mentioned in my post above are parfocal within probably a mm so once focus is reached,

To answer your questions Bill;

There is a flat plate between the optical paths.

The diagonals can be adjusted with a 4mm Allen wrench using the bolts at the back. Each diagonal is mounted on an adjustable plate.

For the diagonal sizes, I drew the optical layout on paper and derived the sizes from the drawing. It is possible to have 100% illumination using bigger diagonals but I don't think that is required.

There will be further fiddling and fine tuning coming up and some paint too! The weather has been a bit cloudy lately. I want to use it and adjust it and prove to myself it is good to go.

One wants the  two eyepieces'  eyecups' tops to  lie in the same horizontal plane,  at Zero  diopters, or , if one chooses,  in the same plane at   owner/principal  user/sole  user   personal diopter settings  at infinity.

Has  Istar   supplied  the lenses   with matching focal lengths?   Did you   specify  that, did they comply,  and was there  a premium  for that?    Do/did they   specify   a tolerance  for such matching?

What  mechanisms   have  you    to   space  the objective  cells   fore-aft,   to    compensate  for mismatched  focal lengths?   Thin washers,  with R&R  required  for each  adjustment iteration?

My focal lengths match within about 1/8 inch.....I used washers between one of the objective cells and BinoBox to bring the eyepiece heights equal (my eye diopters are the same.)

I love all the black open baffle-boxing inside.

The lenses were purchased as a pair for a binocular and they have sequential serial numbers. There was no extra cost.

One of the lenses has a focal length of 700mm, the other is 713mm. This difference is taken up by an extra layer of plywood under the lens cell. In practice this difference in focal length does not seem to matter, at least not to my eyes. I have only been using it at 29x magnification with the 24mm Panoptics. 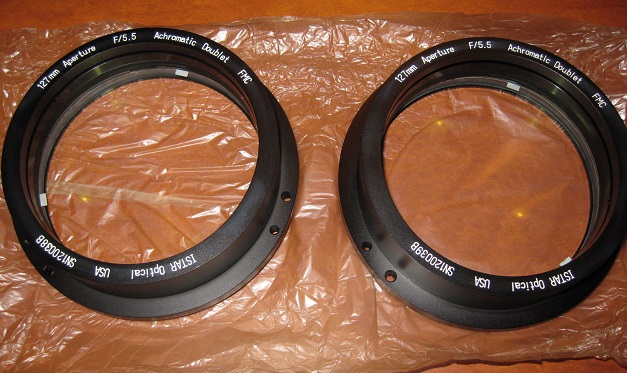 Thanks for all the positive feedback. I've been getting some good views with it and it works great. I can recommend this type of binocular for astronomy. It is a relatively easy ATM project once you have the optics. It is tempting to try and make a smaller version. Maybe I will try some aperture stops on this one first. It will be easy to try 100mm and 80mm stops.

These lens are made in China. You can still buy them via taobao.com, the corresponding model is 131/700. The focal length tolerance of Chinese national standard is +-5%, I don't know what Istar's standard is, but 713mm is probably still OK.

Very very nice and inspirational, thanks for posting this. I'm curious, how much does the OTA assembly weigh? (i.e. without the rocker box)

A 2% difference in objective f.l. is tolerable, which here is about 14mm. A difference of 4-5% is pushing matters, although the central region of the FOV would still be kind of OK. If an eyepiece pair could be found having the same ratio on their f.l., they could be matched to the appropriate objective.

The OTA assembly is just under 10kg with 2 eyepieces.

Glenn the focal length difference does not seem to be a problem at 29x. I guess it could become more problematic at higher mags?

Andy,
No matter the magnification, a given objective focal difference results in the identical image scale difference at given *apparent* angular distance off axis.

From the foregoing it's obvious, of course, that a difference in image scale becomes ever more impactful at increasing apparent angle off axis. If the image scale ratio is twice as bad, the field diameter in which the effect is not significant is half as large.

And again, to be absolutely certain there is no confusion, magnification has no bearing at all; apparent field angle alone is the determinant.

Guess I lucked out....my Istar objectives are within 3-4mm.

I also asked for matching focal lengths and the lens cells are marked #9 and #10.

Since I asked for matched focal lengths,  I assume they matched lens sets before mounting in cells.

These lens are made in China. You can still buy them via taobao.com, the corresponding model is 131/700. The focal length tolerance of Chinese national standard is +-5%, I don't know what Istar's standard is, but 713mm is probably still OK.

i tried searching but couldn'd find their range of objectives