As a widefield freak I was always interested in buying a Vixen SG 2,1 x 42 or a "Gucki" for low power widefield views with big aperture.

So I bought two of these cheap at ebay.

Big aperture means big outside diameter, in the case of theTC-E2 this means 65mm

As my IPD is only 62mm I did mill 1.5mm away from each converter giving flat sides to join together both pieces.

I wanted it lightweight and smooth, so I decided to glue both converters together instead of milling a piece to hold them in place.

Sure it works only for my IPD, but this is part of the game :-)

OK, lets look at some pictures: 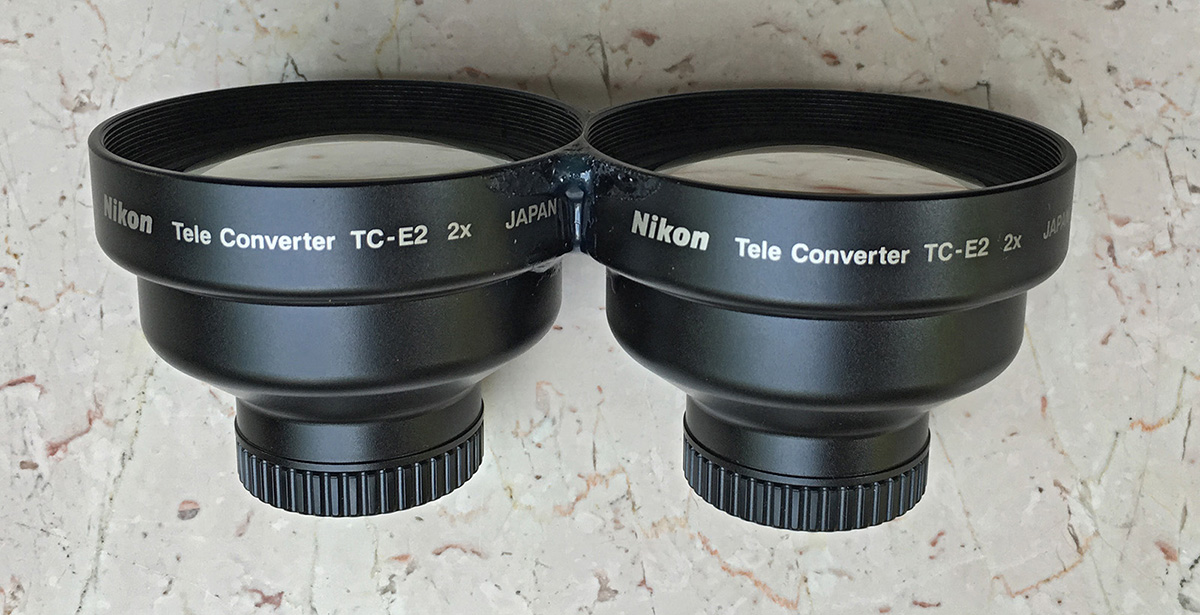 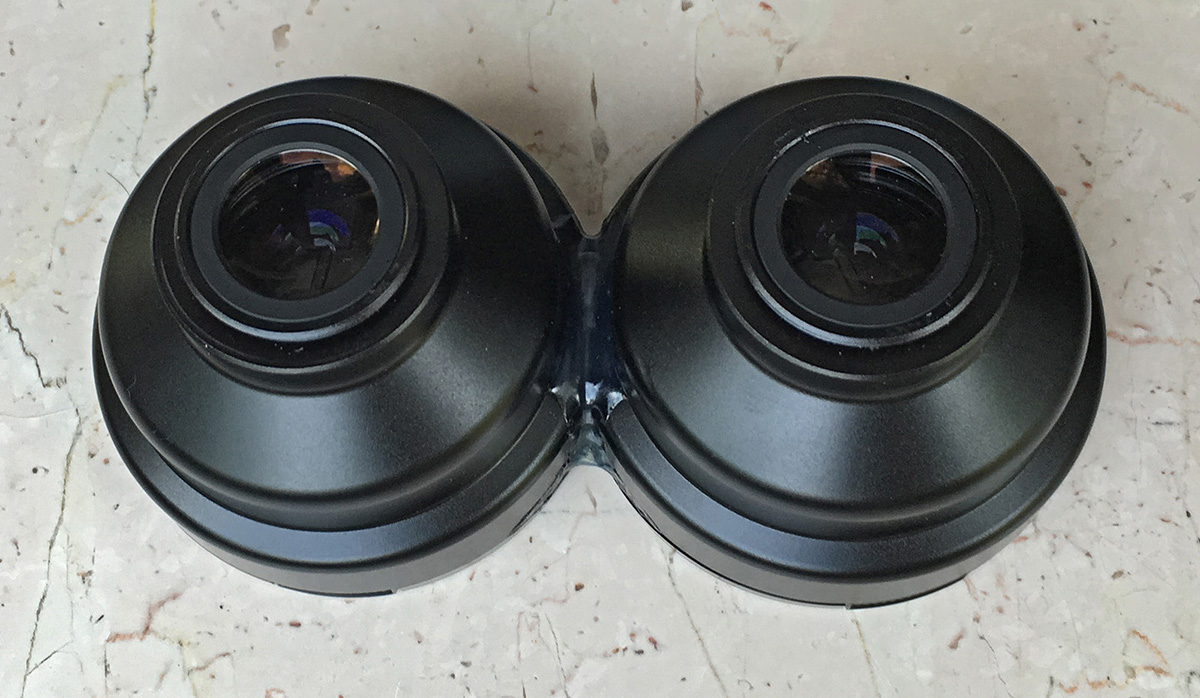 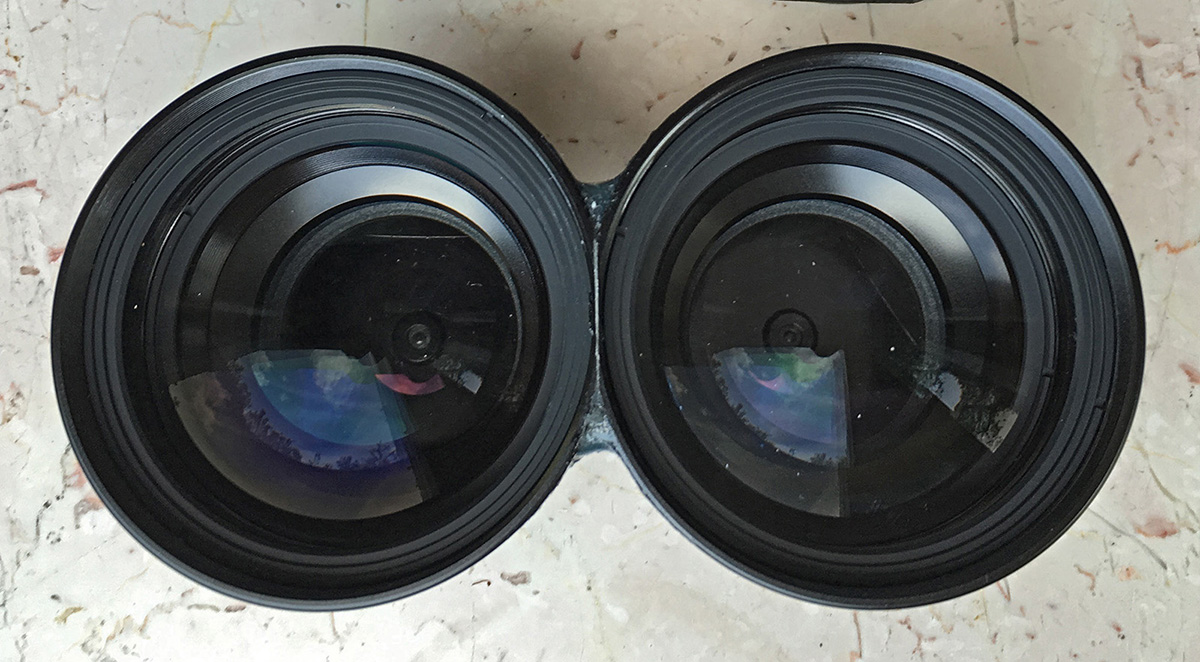 The astonishing thing with these converters is that they are sharp to the edge.

The field is around 27°, I could place the Big Dipper completely inside the field.

I have not yet been able to make a side by side comparison with the Vixen or the Gucky, but from my memory the "Nikon" is far ahead in any way.

54mm aperture are much more than the 42mm or 40mm of the "competitors" and the edge sharpness of them is not that good at all.

Actually I am waiting for some rubber eyecups to finish my work, but as the eye distance is quite huge they are already very usable.

Does "eye distance" mean eye relief? What is the eye relief?  Could these be an good alternative for those of us who require glasses to observe?

I am sure you can use these with glasses, but probably you will not be able to use the full 27° of field then.

Thanks Jochen, let us know how they perform under dark skies once you use them a few times.

The price for the teleconverters is quite attractive. I guess the welding bit is where people may get stuck!

Congrats on your new bins! Do let us know how they perform!

I made a wide field bino from a pair of these some time ago. No welding needed if your inter pupillary distance is wide enough. I found something on eBay that could hold them together. Will post pics later.

The black metal parts are fuel pump holders I got from eBay. A little heavy but still fine. Only problem is that one of the two protruding parts in the middle may prevent proper nose placement. I have a small nose so it is fine. But you can probably cut one side off since you need just 1 screw to hold them together.

I've designed and printed simple adjustable shell. I have to refine the design a little bit and print with better quality but it seems to work very nice.

FOV is huge, stars are pinpoint and sharp to the edge. It's so easy to hold as it's only 2x but even under urban sky I see much more stars.

Not bad for $60 for two brand new converters

So how is the eye relief on these, are they usable with glasses?

How do you focus?

How do you focus?

The bad news - no focusing mechanism.

If you don't wear glasses, they are great. But if you do, you have to wear them and you don't get to take in the full fov.

So they are useless for many of us...

For a Galilean system the exit pupil is inside the instrument, and so one is already suffering a reduced FOV. The maximum FOV can be realized only when placing the eye's cornea in contact with the eyepiece lens. For every increase in eyepiece-to-cornea distance the FOV is further reduced.

Teleconverters for camera lenses need only be fixed at (or near) infinity focus, for the camera's built-in lens does the focusing for varying object distance. It *might* be possible to loosen up something and tweak by a small amount the lens separation and thereby achieve some adjustment for visual focus?....

I got bit better version now with place for eyecups. It's much more comfortable to use now. Design seems to be fully functional now but I have fix few things to make it look better.

While a teleconverter's field of view may be reduced a bit

with glasses, it's still quite huge.   I have a variety of them I use

as monoculars.  Some have a very large back lens and no

field width is lost with glasses.

The front is wider than the Nikons above, though,

so binocular use would be tough.

Something that is missed in the analysis:

these things have meniscus lenses, so they start with a much wider

I did fiddle with one that had damaged collars, as the bare lenses.

You can adjust focus, but the aligment is super-critical.

Some teleconverters actually have a chromatic bloom when they

are too close to your eyes. The whole picture doesn't work up close.

Some actually come with a spacer tube.  Like Barlows, the concave

lens section develops its effect away from the glass face on some.

OK, I think project is finished. It works very nice.
This is how it looks now:

It took some iterations until it worked as expected:

I've published stl files for those interested in printing it: http://www.thingiver...m/thing:1560347

Thanks a lot for these files, I am going to have printed a pair for me.

Are the dimensions in the files millimeters or inches ?

It's in millimeters but I'll make another version with strap mounts on the sides. It should be ready today.

It's in millimeters but I'll make another version with strap mounts on the sides. It should be ready today.

Thanks, so I will wait for the one with the strap mounts.

What did you use to glue the Converters into the holders?

I didn't used any glue. Shell snaps to the converters quite nice and I don't see I need to glue it, but you can of course use some glue to be sure.

While playing around with some teleconverters to boost the power of binoculars I found out, that some teleconverters can be used like small telescopes.
Especially the Nikon TC-E2 was very promising with nice views and a big aperture of 54mm
So I bought two of these cheap at ebay.

I am sure glad I decided to look at this thread.

The TC-E2 and the TC-E3ED were teleconverters designed to be used with the Nikon 990, 995, and 4500 Coolpix cameras. These were point and shoot cameras from the days before the affordable DSLR and were high quality and even used in research.  I used both the 995 and 4500's for digiscoping and purchased both the TC-2 and the TC-3ED to use with the cameras.  I never used them much, the TC-3ED blocked the viewfinder and the LCD screens of the era were pretty small and dim..

But I just went outside and tried them out as monocular/telescopes.. I can't wait for some clear skies to try give them a try at night.

I see some very nice craftsmanship and design on the various binocular versions but for now, I am going to be satisfied with just the monocular versions.  The TC-3ED housing is about 75mm in diameter so its really only viable as a telescope/monocular but I can't wait to see the night sky..

I have had the darn things for close to 15 years and they have been with me traveling to some of the darkest skies in the US, and I never thought to even try them.. How lame is that?

Sort of a counter-intuitive gadget.

put the light in as if it also came from infinity.

If you can give up the 2-eyed view,

there are some old monster teleconverters out there.

but the field width is somewhere in excess of 40 degree

If the correction of your glasses is off, a teleconverter can amplify that issue.

You folks are clever! I just ordered two of the Nikon TC-E2 converters from ebay. I enjoy playing around with optics. ArsMachina, thank you for the initial post👍