Post a Picture of Your Classic Telescope- with or without you!

This is from this year's July when Comet Neowise was visible, and I am looking at it with a telescope right in the city centre.

The scope is actually not mine, but my older brother's Celestron Comet Catcher on his black SP mount. Myself I was just bringing a camera + telephoto lens, and with that camera I tried to capture a selfie as well. In the second shot I am looking towards the comet and the comet itself is barely visible in the very top of the frame, to the right.

We both didn't find the time to travel anywhere dark so we just set up the scope in a small park located where we both live, to have a quick look at least. You see there was a huge lit house just next to the location. Well nonetheless, we did see Comet Neowise! So the experience was great despite the horrible lighting conditions! Thomas

I have now been into this hobby for almost two years now. All of these scopes have been found locally 2nd hand in thrift stores. Here is my current collection of keepers until I might find something of a similar design that beats one of them out. 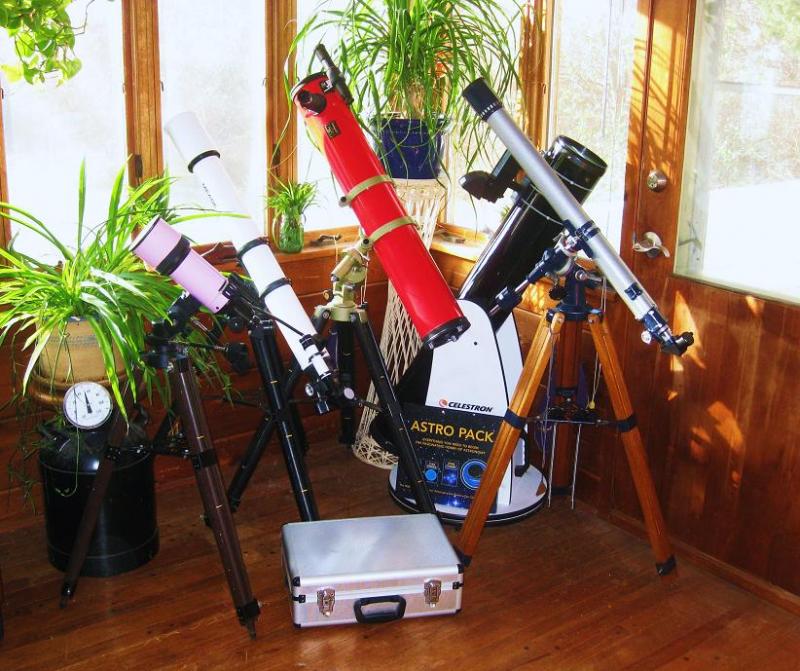 (Gives Wide Views. I sometimes use this for just a quick night time view, and also as a backyard spotting scope for birds).

(I also have a similar sized Celestron AstroMaster 90 that just slightly edges this one out in performance, but the two are so close that the nicer build quality of the Meade puts it ahead of the Celestron in my opinion, The slight difference in performance is only noticed in a direct comparison). I'm going to be bringing the AstroMaster down to the family cabin where I have better skys, and will keep the Meade at my house where it will be used more often.

(This was my first decent scope found, and it performs well and is in amazing condition). It's kind of redundant to the dob, but I still like it. It beat out a Vixen of the same size, so the Tasco now sits on the mount that came with the Vixen.

(This is my largest and top performing scope).

(This is the nicest vintage scope I have found so far. I like its performance and it gets used often.)

In the last year I think my only new scope addition has been the Meade 390. The only other scope I picked up in the last year has been this little millennium era Lomo Captain 40x290mm Maksutov Gregorianbut spotting scope, and its not great for astronomy use in my light polluted skys. It provides a nice sharp image, but does not gather a whole lot of light and is a bit darker than the others. Its best used in daylight. It will be used on backpacking trips where size and weight is a primary concern. 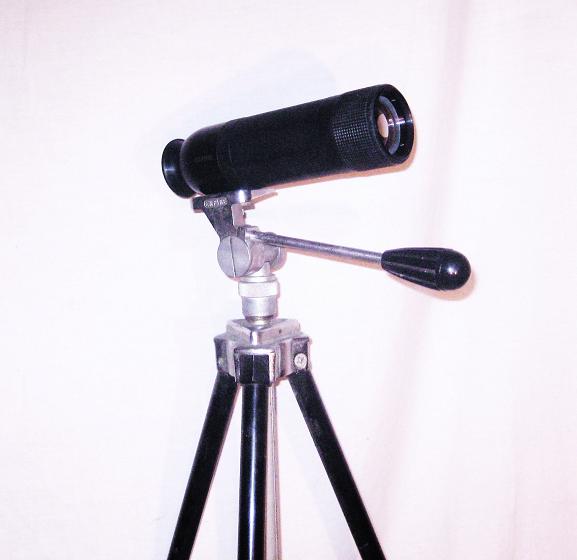 Overall my collection size has shrunk down in count this last year, and that's a good thing. These for now keepers each offer something a little different. I have about $350 -400 invested in the scopes pictured above (Not counting a few additional eye pieces and accessories). I keep my best finds, and my total cost out in the hobby is higher, but has been offset with a few sales.

Edit: I have a small 6' x20' something 2nd story deck off to the right of this room, that I should use, but for the last two years, it has had a broken lock on the door that does not open. (it's on my to do list of things to fix). Lol... Its been so long I almost forgot about it. It would sure beat dragging the scopes out though the opposite end of the house.

This is now going to be my weekend project. (Finally fix that dang deadbolt lock, so I could move the dob just 5 feet over to the right for a clean backyard southern view). It will also get me another 4 to 5 feet off the ground to help clear the tree's, I'm not sure why I did not do this earlier. 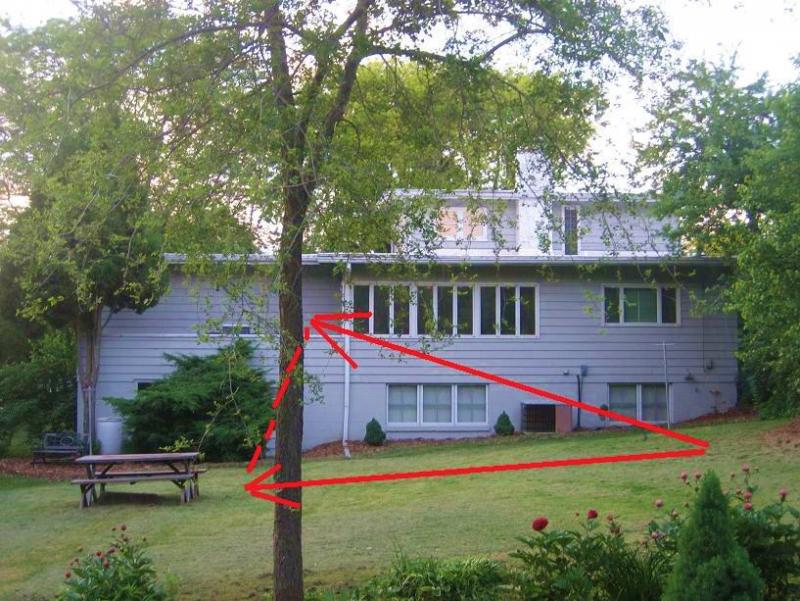 But with winter quickly approaching, 30 minutes spent fixing the lock will make things much easier. No more slipping down the icy hill.

4 to 5 feet does not sound like much, but will help me to dodge a few trees that all all taller now than when this photo was taken. My Chicago area suburban back yard is completely surrounded by trees in all directions, which makes my viewing sessions limited in time. I also have very poor viewing conditions due to light pollution. 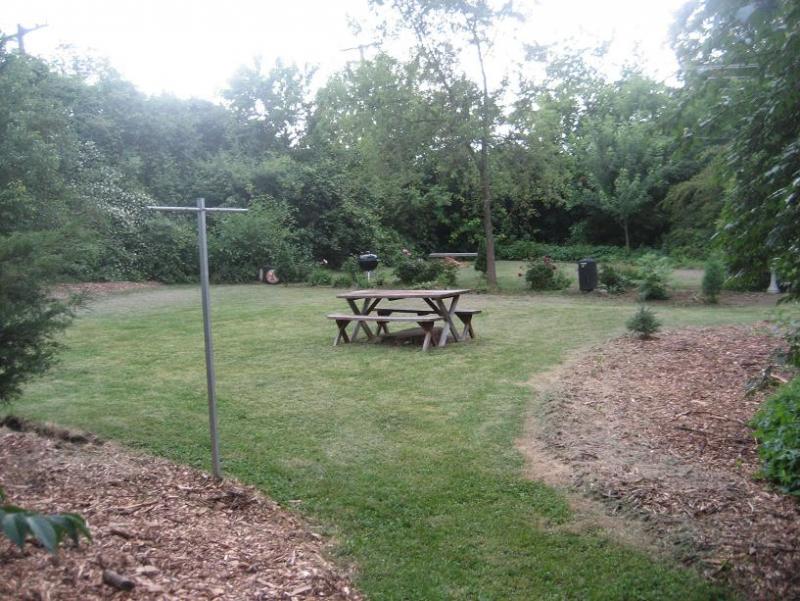 I guess the light pollution could be worse, but not by a whole lot. I went into this hobby with the cards stacked against me. 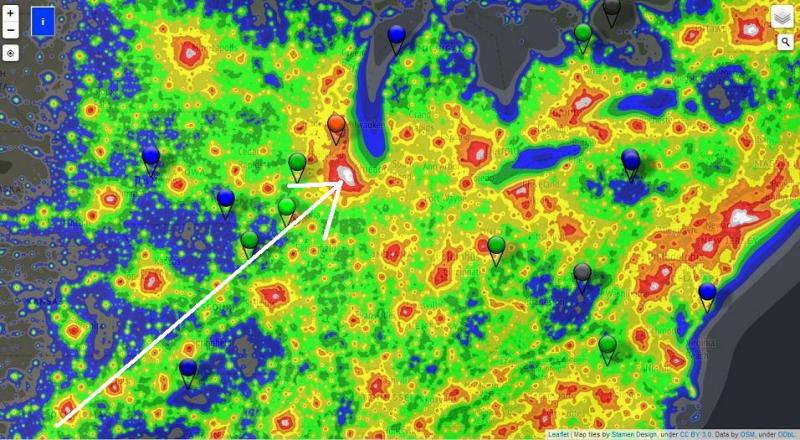 Arguably the grabbiest, goiest telescope I own. A Tasco 4vte that is identical to the one i got for Christmas 60 years ago, down to the cardboard box with Intact plastic carry handle. The inspection tag was even still attached via a string to the focus shaft, but it looks like the silverfish ate the tag!

the one I got for Christmas is long gone, having suffered grievously at the hands of an inquisitive 7 year old. I gave it away about 40years ago.

Two of my classic 60mm favorites that probably more than a few of you can relate to. 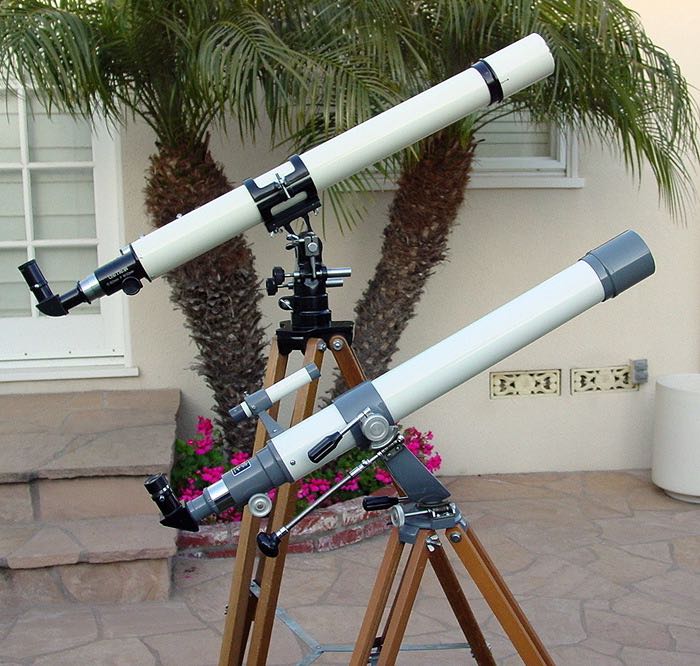 For some reason at first the Unitron purchase left me a little flat. As in not as exciting as some other finds. 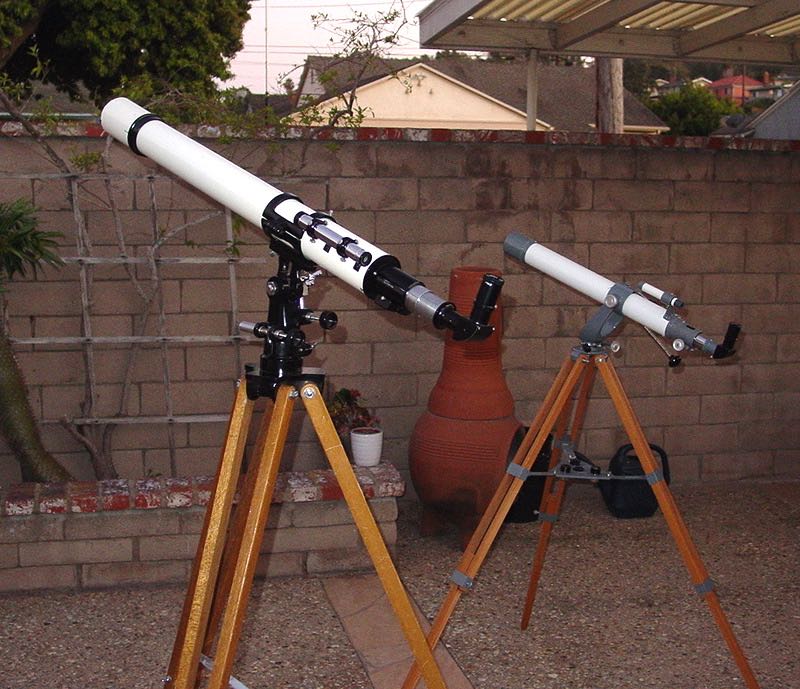 It has since grown on me very much.

BTW, any excuse for a little eye candy! 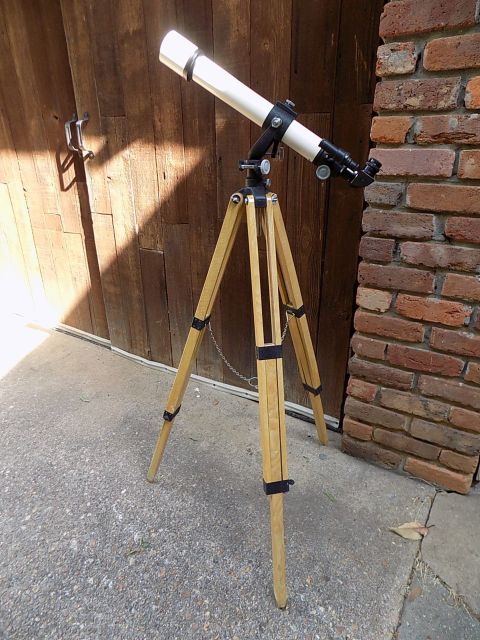 Last night was the first time in many months that I'd used it, and with the Tak prism, views were pretty good.

I bought this 50mm F10 mainly as a display (mint cosmetic condition) -- dig the Tiny Finder!  But it's above the usual table-top grade 50mm, so I guess that's something...

Two of my classic 60mm favorites that probably more than a few of you can relate to.

For some reason at first the Unitron purchase left me a little flat. As in not as exciting as some other finds.

It has since grown on me very much.

BTW, any excuse for a little eye candy!

I’ve had my Mayflower 814 since 1965. It’s still my workhorse 60mm scope that never ceases to please when I look through it. Here it is in it’s current interation:

Now those are some sweet setting circles!

My TV Genesis on a Panoramic mount earlier this year. This location is only about 1/4 mile from the house within our neighborhood. Gives unlimited 360 deg views. Love this setup, easy to transport and the digital setting circles are a breeze to use. Very easy to get ALOT of viewing in a very short time. 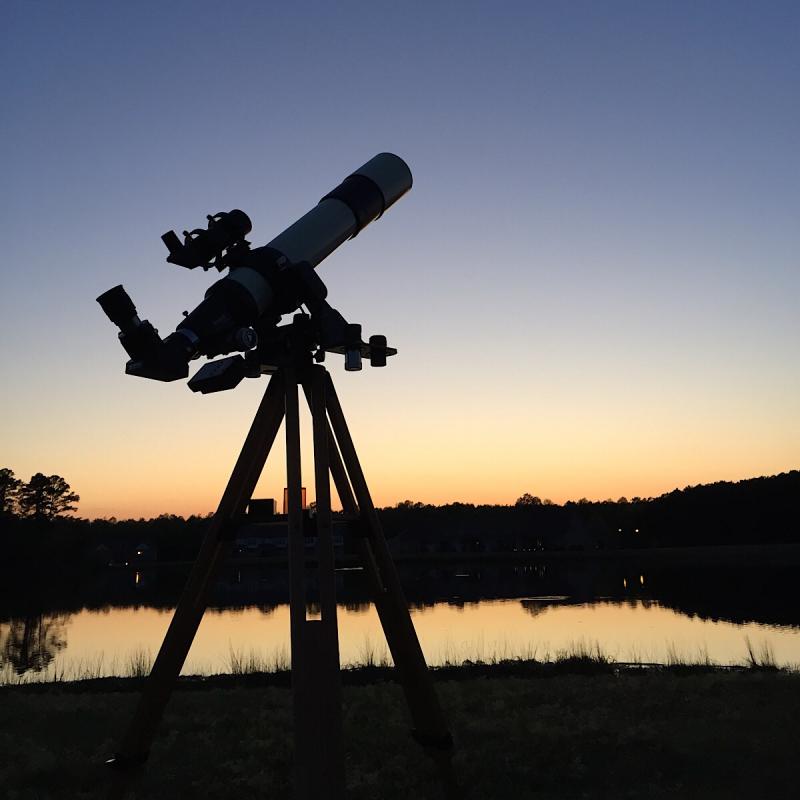 I love the pic Scott! It looks like a magazine or calendar picture! My TV Genesis SDF on the Gibralter mount and ashwood tripod is my favorite 4” refractor ever! It’s a wonderful do-everything scope. It can give a FOV greater than 4° with a low power 2” eyepiece and also deliver sharp planetary views at >200X. It’s an ergonomic dream to use and so easy to set up and take down! I love it!

Thanks Terra and I couldn’t agree more. This continues to be my most enjoyable scope as well. Btw, that is a beautiful Genesis SDF setup you have there and one of the motivators to mount a finder on mine.

My original Genesis has more CA but I only use it to 100x, a 4x Barlowed 20mm usually. Its badge is Tele Vue, Pearl River N.Y.

Images from Friday (12/18) before, during, and after the conjunction.

Since they are of the scope and me, this seems to be the appropriate place to post them. 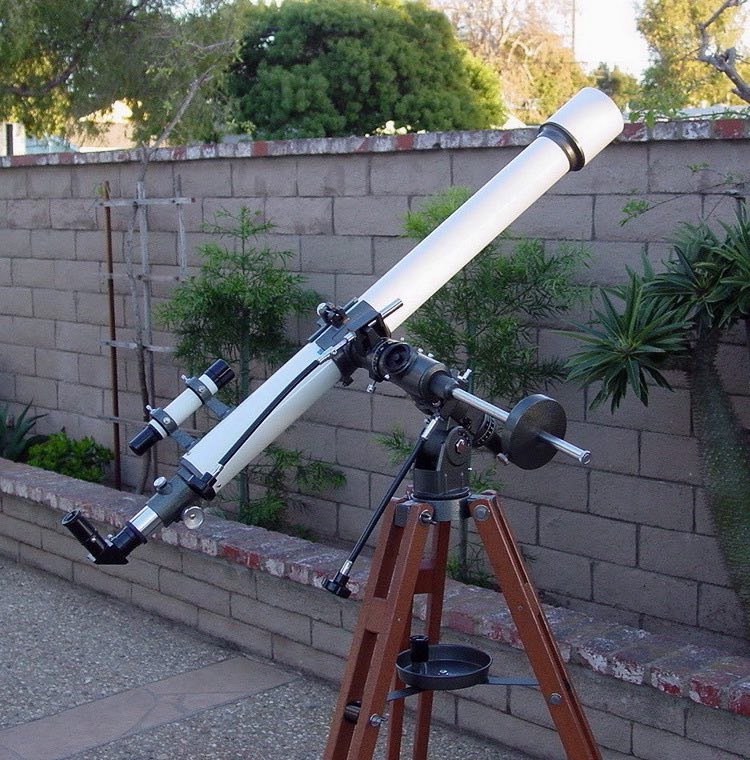 Miazr SP-68R set up before hand and observing the Moon during daylight. 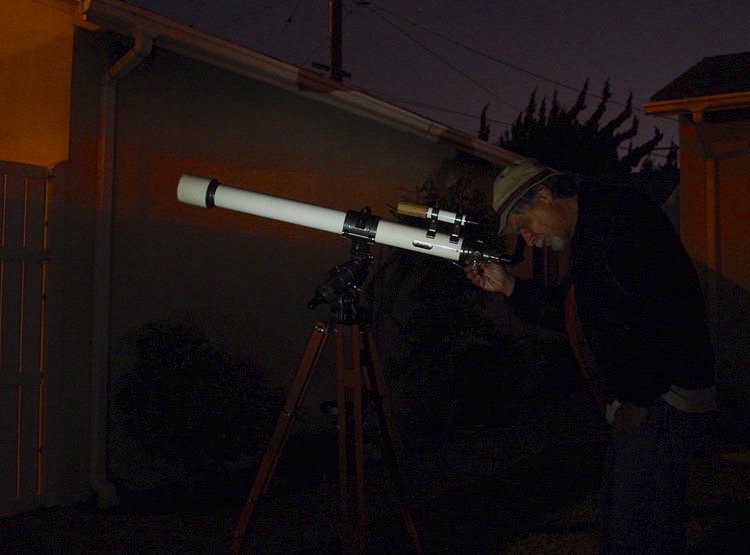 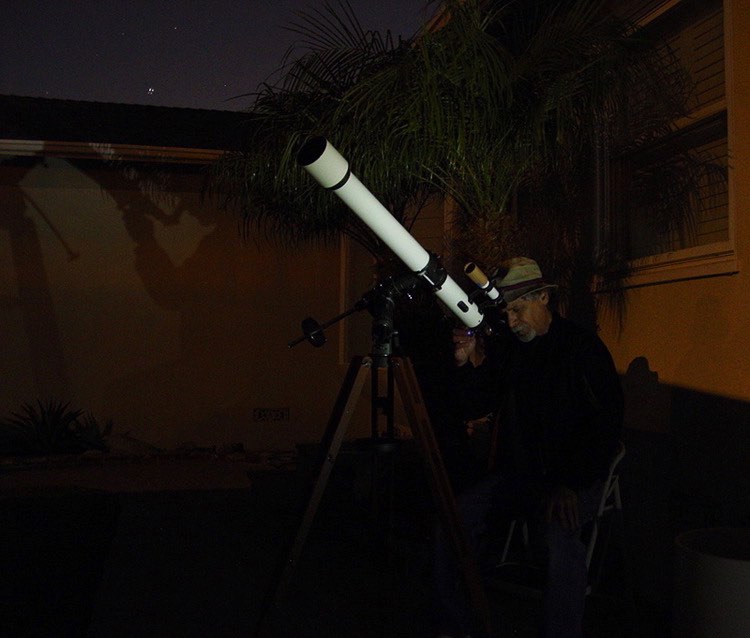 and afterwards, back to viewing the Moon.

Me and the Sears 6344, contemplating the vagaries of timing, clouds, and luck.

Hope to get to set it up again tomorrow evening.

I really like that Mizar SP-68R.  I got rid of all but 1 of my 60mm-class fracs, but with two Mizar EQs, I could see having a vintage Mizar...  Very nice Classics.

I really like that Mizar SP-68R.  I got rid of all but 1 of my 60mm-class fracs, but with two Mizar EQs, I could see having a vintage Mizar...  Very nice Classics.

It's a great scope. A little bigger, sharper, and brighter than your typical 60/900 but light enough to easily carry it around the yard. To take it in and out of my garage's side door I only have to loosen the center wing nut that holds the tray, and the legs narrow enough to fit thru the door way.  I take the OTA off but could probably leave it on, don't want the chance of banging it.

And as you well know, the mount is very nice to use. 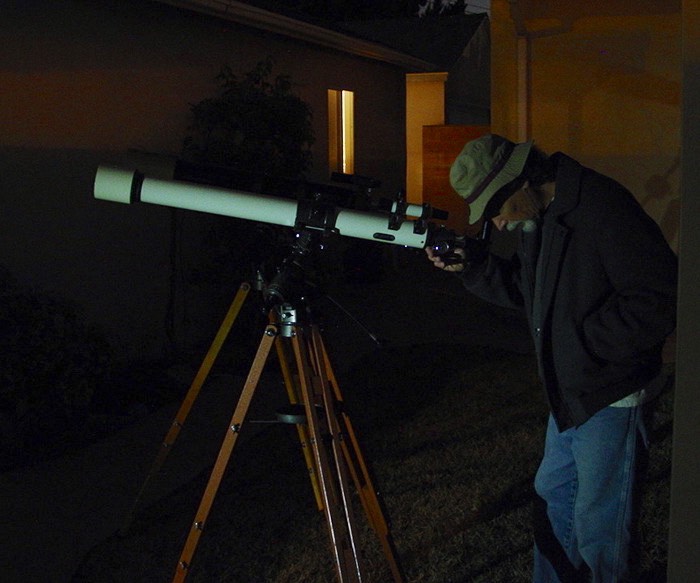 The all black SP-C80 disappears in the darkness 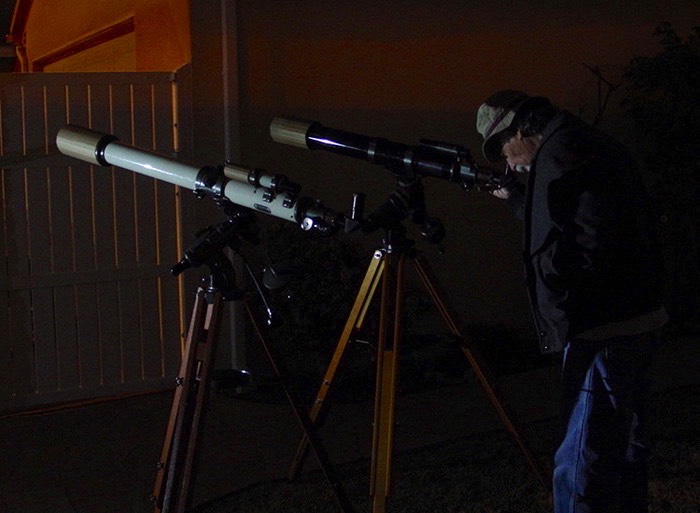 While the image was noticeably dimmer, in some quicky side by side testing, it appeared to be just as sharp as the SP-C80.

Circa 1957 Edmund 4 inch refractor mounted on heavy duty Jaegers mount sitting on a Edmund maple tripod. The old Edmund mounting studs did not fit the Jaegers saddle so Parallex rings made it possible.....plus I was able to balance the OTA.   Waiting for the clouds to clear and conjunction to commence........CCCC.

Yesterday I replaced the stand on my SYW/Yamamoto 76/1200 - what a difference! Now it is very usable. I do not understand, why the manufactorers of these high valuable telescopes used such cruel stands like the black one ...

Makes sense:  Both have Excellent optics.  Both have simple construction.  Both are surprisingly light for their types & apertures.  Both almost demand that you improve their hardware -- tweak that last little bit of performance out of them.

About 25 years ago I inherited my great uncles Mirador Super 60/1200mm (~1960). I was fascinated by it when I was a small boy. After being in storage for 20 years I took it out recently and cleaned it up. It has an adjustable objective and a collimation did wonders for its performance.

My latest refurb, a beautiful Super C8, the first of the Black Cats... 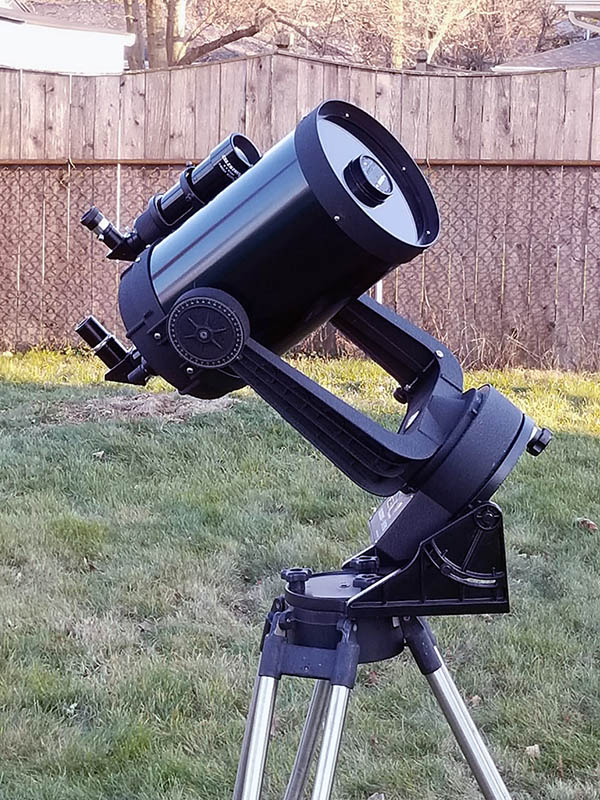 I took it completely apart, cleaned it, replaced the grease, replaced the window over the Byers Drive, and put it back together. The drive runs smooth a silk using my Meade Lithium Ion power tank and once I had the collimation zeroed in I got a fine view of Mars at 370x with very little breakdown of the image. Wonderful! I love star-hopping with these scopes; hence the right-angle finder.

You never associate the ds-16 as a classic.However,the timeline is right.I had one of those first 16s(shaving mirror) by meade in 1987.Certainly did not care for the gem it came with so I built a dob mount.That's a jaegers built 80mm finder and a meade 32 rg in the focuser.This is the only pic I have of that scope and is easy for me to date.It's outside.I built my observatory in 88 and that scope and the others moved in then.