Started by vicolodo , Jun 13 2016 11:05 AM
This topic has been archived. This means that you cannot reply to this topic.
12 replies to this topic

Look at these telescope mirrors configurations: 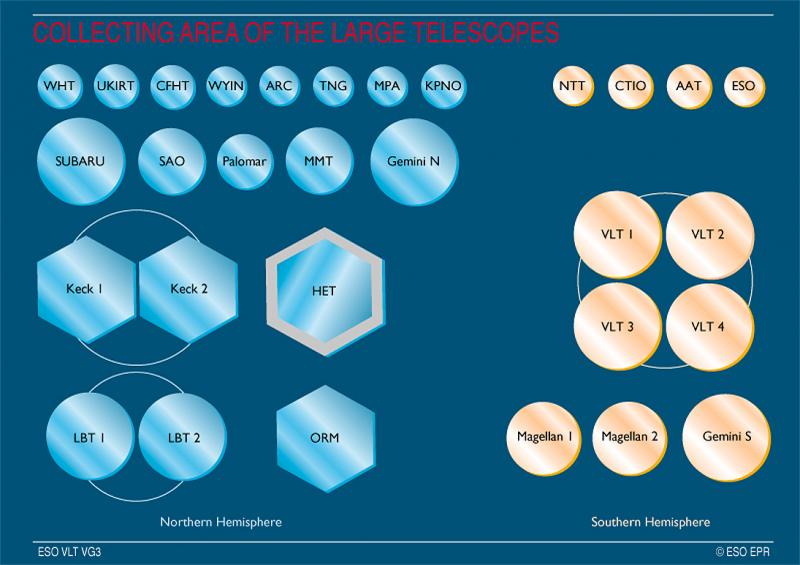 You see, the modern telescopes are made of multiple mirrors.

Do you think is it possible, at DIY level, to make a telescope using multiple mirrors?

in your opinion, what would be the main difficulties of a project like this?

Simple example: buy two 10 inch mirrors and put them on a wood support,

one at a certain distance from the other

Then with an alignment procedure, align them to get a perfect alignment

Do you think in this way you could get a telescope with enhanced resolving power?

Yes if configured as a binoscope aka use two eyes.

for example, build a very large primary mirror as composition of n small diameter spherical mirrors put on a roughly parabolic surface., and perfectly aligned with some procedure...

I'm guessing for DiY you'll be stuck with spherical mirrors - the matrix can be combined of mirrors with the same curvature. You can't do this with parabolic mirrors.

For collimation, I guess you'll have to make sure all mirrors are positioned so that their surfaces lie on the same "virtual" sphere, seems possible.

I remember, in the '80's, when the first MMT was built, one of our club members decided to make his own MMT. He basically cast seven 6 inch mirrors in a circular plaster/plywood mold, ground, polished and parabolized them together.

Of course, it didn't work!

I remember reading a more serious trial by someone in the US amateur community in the '90's. I don't think it worked either.

I would guess the amount of computer effort to align all these mirrors correctly, whichever position the scope is pointing, is just as hard whether the scope is made of 6 inch mirrors or 60 inch ones (OK, probably harder for the 60 inch ones).

I'm going to stick to mono blanks for the rest of my life. They are hard enough to get right and there is only one, I wouldn't want to tackle mounting two or more.

All the configurations shown are separate telescopes with separate detectors. Some of them have segmented mirrors (not shown) but the segments form sections of a single parabolic (or similar) mirror. None of them combine parabolic mirrors in the configuration you propose, basically because it wouldn't work.

Polishing mirrors into segments of a parabola is much harder and more expensive than polishing a single mirror, and almost certainly will be way outside the reach of an ATM for a long time. Not that difficulty is much of a deterrent, the real question is why? Why would someone bother to go to so much trouble and expense for a poorer mirror?

The only reason professionals do it is because they want 10m+ mirrors, not 10". They are forced to use segmented mirrors for two key engineering reasons...

Yes if configured as a binoscope aka use two eyes.

A bino-scope has better resolving power than the individual telescopes that make it up?

There is a CHief design that is unobstructed and has A LOT of back focus ... could separate the mirrors by 3 feet if put in a bino- configuration ...

Mostly as a result of the brain/eyes relationship I would think......

From all the accounts I've read, the MMT was a considerable disappointment. It's performance was severely limited by the structure flexing under its own weight. The six 1.8 m hex-mirrors were replaced by the 6.5 m mirror almost as soon as this became practical.

My understanding is that you can only gain an improvement in resolution if you maintain the phase relationship of light coming from each segment. I know of only two ways to do this -

1. Align your optics to a small fraction of a wave (and keep this alignment as the scope is re-pointed.) This is quite challenging and extremely difficult to maintain over a usable temperature range.

2. Construct an adaptive system capable of correcting for the structure's deformation. All the large scopes I'm aware of now do this. By way of example, the HET and SALT instruments have multiple segments - SALT has 91 segments in an 11x10 m array and each segment is individually positioned in 4 DoF. These are aligned using pistons but the primary mirror array is stationary during observations.

In any event, my experience is that the seeing is seldom better than 1 arcsec and it's almost never better than 0.5 arcsec. A good 12" has a theoretical resolution of ~0.4 arcsec so it seems a little "ambitious" to pursue resolution beyond what the atmosphere permits. Of course, if you have deep enough pockets and a friend with a convenient mountain, even atmospheric distortion can be fixed...

Yes, the bino wins.  but it's not the scope it's your brain.

Quoting our resident 2-eyes expert Glenn LeDrew, a 41% improvement is achieved when using 2 eyes vs one eye.  Binoviewers do that by splitting the mirror's light, 1/2 to each eye.  Binoscopes do it by providing a primary for each eye. So you'd be WAY ahead with a binoscope vs a MMT just because of the increased resolving power of 2 eyes.

According to J Zirker in his excellent book 'An Acre of Glass', after 5 years work Beckers and Hege were able to combine all six 1.8m mirrors (of the Multi Mirror Telescope) as an interferometric array which had a diffraction limited performance equivalent to a 7 meter mirror. Despite this the MMT board of directors decided to convert the telescope to a single 6 meter monolith from Roger Angel.

in order to coherently combine the multiple mirrors , they first need to be exactly the same focal length exactly as if they were parts of one single mirror . Same fraction of a wavelength accuracy is needed as for a solid mirror .

Second , their alignment must be phased and maintained over all telescope operating conditions including from zenith to horizon and cold to hot temp changes. MMT mirrors were phased using mirror edge relative position measurements based on very sophisticated and precise sensing in the nanometer range . It can't be done at home and not with wood structures .

No, they don't need to have the same focal length "as if part of one single mirror" they just need to be capable of being phase aligned and close enough in FL that there's no detrimental effect on the image.  They can be many wavelengths off in exact FL so long as the requirement for phase alignment is meant - which means they are adjusted physically so that the optical paths are the same length closely enough to allow phase coherence.  Depth of focus of the individual segments accommodates this adjustment against absolute focal length, the more important factor is that the segments match in focal length so image scale isn't affected.  What's important here is that the telescopes that do this are all under active control, with monitoring equipment (generally Shack-Hartmann sensors) to keep them aligned in use.

This paper on a 1/5th scale model of the GMT and the GMT design itself describes this, noting that rough positioning (to microns) is done with the segment's active support structures on a slow (0.01Hz) cycle, and rapid phase alignment will be done by a matching segmented active secondary...  http://www.gmto.org/.../GMT_5494-8.pdf

Manufacturing the six off-axis segments is recognized as a challenge.

Most large mirrors have a loose tolerance on focus, equivalent to a tolerance on radius of curvature of 1 mm or more. The GMT segments have a much tighter tolerance on focus because of the need for all seven mirrors to have the same image magnification. The requirement is strictly that the segments must match in radius of curvature rather than that they all have the specified value. While we may be able to achieve better relative accuracy than absolute accuracy in radius, the fact that the mirrors will be made over a period of several years makes it more difficult to maintain a common standard. For the time being we are setting a goal of measuring the absolute radius of curvature to an accuracy such that each segment could be bent to the nominal radius with the active supports.

Alignment tolerances are relatively tight for the GMT because of the f/0.7 primary mirror. Optical alignment should be held to an accuracy that does not degrade image quality in any observing mode, from relatively simple groundlayer adaptive optics—correcting with only the deformable secondary mirror—to the most ambitious multi-conjugate or extreme adaptive optics whose goal is full diffraction-limited imaging. In all modes, the primary mirror segments must be positioned with sufficient resolution that residual alignment aberrations are a fraction of those caused by the atmosphere, and maintain this level over wavefront averaging intervals of about 1 minute. The aberrations will be measured in the wavefront and the immediate correction will be made with the adaptive secondary mirror, but the correction should not be allowed to be a large fraction of the correction needed for seeing.

We have analyzed the requirements for alignment of the GMT segments in the telescope. Rapid correction of all wavefront errors will be made with the adaptive secondary mirror, and slowly varying errors due to alignment will be transferred to the primary mirror segments. Tolerances for in-plane motion of the segments are loose compared with the resolution of the segments’ hard-point positioners.