Anyone know what causes this artifact on bright stars?

Started by microstar , Aug 15 2016 11:22 PM
This topic has been archived. This means that you cannot reply to this topic.
12 replies to this topic

I'm seeing this artifact on bright stars using a DSLR (T3i full spectrum mod), Hutech IDAS HEUIB-II in-camera filter, and a Bower (=Samyang) 135mm F/2 lens. I really like the lens - very flat field and no CA, even when used wide open. But I'd like to know if this artifact is the lens or the filter or what? Note that the black wedges are at different orientations in different positions on the picture. Anyone see this before?

I've seen it in m own images with my Canon 600mm f/4 L II lens. I don't know exactly what causes it, and I've resorted to stopping down 1/3 of a stop to trade the bisected stars for starbursts. I have thought about trying to create and use an aperture mask to see if that would help eliminate the problem, without costing me a full third of a stop. Haven't gotten around to it though.

Thanks Jon. I'd hoped that using the 135mm f/2 lens wide open would allow me to lose the starbursts and match the frames better to those through my 60mm portable imaging scope. Disappointing to hear it may introduce this other artifact. It's always a trade off in this hobby.

I have seen something similar from some refactors and it's called pinched optics. I have not seen reports of pinched optics from DSLR lens.

If you are talking about the black wedges, that is diffraction effects from aperture vignetting.

The edge of the field doesn't see the full circle of the aperture, it sees an almond-shaped aperture and that is the diffraction effect from that.

Ah, Jerry, that makes sense! Also explains why the orientation changes radially around the field. So, even with say an aperture mask...that probably would not really help, would it? Even with the starburst effect I get when stopping down a third of a stop, if I look closely I can still see the bisected shape in periphery stars...it's just that the starburst dominates it.

Jerry is correct.  You will see the exact same artifact from baffle tube vingetting in a SCT used at wide angles with the HyperStar.

Great explanation Jerry. I guess there's no way getting around that other than some kind of post-processing or stopping it down and masking it with the starburst diffraction pattern. Nice to know it isn't a defect of the lens though - I really do like the 135m f/2 Bower/Samyang for imaging with my AstroTrac - very compact and portable setup.

One way to fix in Photoshop is to use the circle tool select the disk of the circle, plus a little more, with some feathering. Copy and paste. On the pasted layer, free transform (or transform/rotate--but free transform gives a little more flexibility) such that the error is in a different place on the upper layer than on the lower. Be sure the upper layer is centered in the same place as the star in the lower layer. Then, erase the defect in the upper layer, letting the good texture of the star show through from the lower layer. You have to be careful you do not move nearby stars and a few other things.....but it is a relatively easy fix.

Thanks for the processing tip Alex. I was thinking about how to do it in PS with the clone tool but your instructions are better.

Problem with clone tool is exact matching of the color, intensity, and texture of the area to be cloned. These items are falling off and changing as one moves from the center of a big star towards its edge---so it is hard to get it just right.

The edge of the field doesn't see the full circle of the aperture, it sees an almond-shaped aperture and that is the diffraction effect from that

Using the software Maskulator I was able to simulate the effect of an increasingly "almond" shaped aperture on star shape: 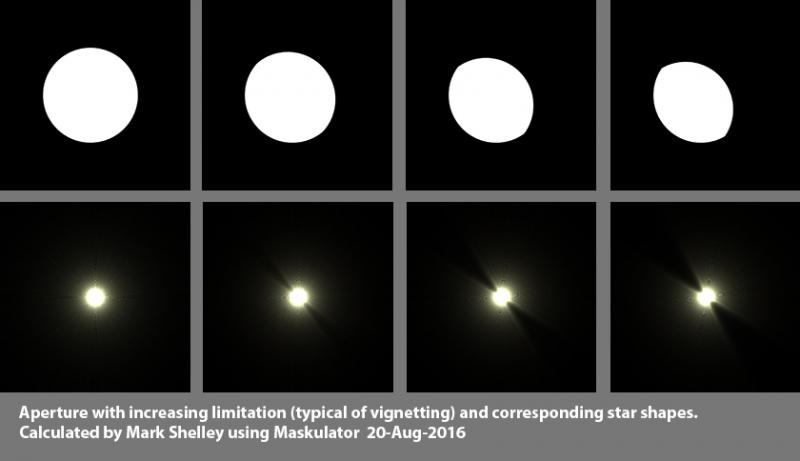 Interestingly it shows how the angle of the "black wedge" increases as the aperture becomes more "almond".  This is an effect I have seen in several images - the wedge angle is greater for the stars further away from the image centre.

The almond shape is caused by the pixels toward the edges of the sensor having their "view" of the circular telescope aperture partly obscured by another component of the optical train e.g. the filter in the filter wheel or in the case of an SCT, the internal baffle.