For the last few months I've been developing custom tracking software for use with my LX200 classic.  Here's a picture of the rig: 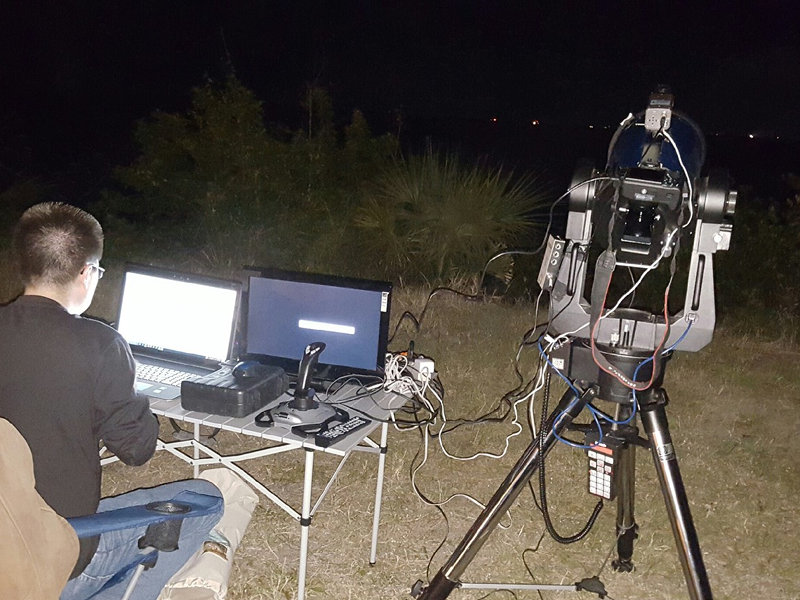 I use an 8" LX200 Classic with an IR-modded Samsung SDC-435 and standard c-mount lens (~50mm) piggybacking on an ADM rail to provide an electronic viewfinder for the tracking software.  I originally wrote it primarily so that I could automatically track rocket launches from Cape Canaveral, using a joystick to initially acquire and designate the target.  Joystick deflection and throttle adjustment both smoothly vary the speed (yes, even though the LX200 classic lacks direct drive rate control).  The second monitor is hooked up to an unmodded Canon T5i which I use for live viewing the rocket up close through the scope.  Together they provide some of the best views any lawn-chair observer of rocket launches can have.  Here's an example video (completely raw, no editing other than annotations):

The program works by following the color/brightness of whatever is targeted.  Obviously, the more contrast the better, but it works well for day as well as night launches.  The major limitation I've found for day launches is difficulty with sun glare on the screen, and difficulty tracking past the first stage due to the limited focal length of the c-mount lens.  In the future I may switch to an 80mm refractor to act as a high focal length viewfinder for daytime launches, we'll see how that goes.

Getting to the point, over the last couple months I've worked on expanding it to provide satellite tracking initially based on an object's orbit (open loop tracking), and then based on both the object's orbit plus video input from an electronic finder camera to automatically center the satellite in the main telescope view and keep in centered (closed loop tracking).  The result is an automatic satellite tracking rig that can provide stable views of low earth orbit satellites for mid-to-high magnification viewing, either in a dual monitor EAA rig as seen above, or even just with a regular eyepiece if desired.  This morning I did an initial test on a bit of space debris, an old Russian upper stage, and it worked perfectly (again, completely raw video here, recorded with the Canon T5i @ f/10):

The satellite is just a dot, but the telescope held it steady with the SDC-435 providing a very fast form of "autoguiding."  The tracking is region-of-interest based, so a star has to pass pretty close to the satellite to confuse it, and it's easy to re-designate the satellite in that situation with a single mouse click on the video window.  For the brightest satellites like ISS and Hubble this probably won't even be an issue at all due to the much greater brightness.  I can't wait to capture some high magnitude footage of ISS, and I'll be doing so tonight if the weather allows (though I doubt it will; this is as sure to bring on the clouds as new glass).

Right now the software runs on satellite pass prediction files generated by Brent Boshart's old Satellite Tracker program, but ultimately I'll see if I can incorporate SGP4/SDP4 propagation within the program to generate the pass predictions automatically.  I know there are other programs out there that do a similar thing (video based tracking and joystick control), but I don't know of any that will work with the classic LX200 or other scopes which lack direct drive rate control in their command sets.  This program takes a different approach to the problem of rapid object tracking.  I'm also looking at distributing it for free, but with a strong "use at your own risk" warning.  I don't want anyone crying to me if they do something foolish with it during the day and steer through the sun.

I'm VERY interested in this project as satellite tracking is my main focus next to astrophotography. Are you offhand going to be at the AFSPC-6 launch Friday morning? My wife and I will be there.

I'm VERY interested in this project as satellite tracking is my main focus next to astrophotography. Are you offhand going to be at the AFSPC-6 launch Friday morning? My wife and I will be there.

Sounds like you might be able to make use of the rocket-tracking feature too.  There's an additional satellite tracking feature I forgot to mention; the program will be able to automatically create an IOD-formatted log of the satellite's detected position based on the telescope's encoder data and the position of the sat in the image.  It won't be as high in accuracy as proper astrometry, but it should allow for at least a rough orbit determination for minimal effort.

I wasn't really planning on being at that launch since I have to work, but if it gets pushed to the weekend I can be there.  Not that it isn't tempting.  I'll move heaven and earth to be at the first Falcon Heavy demo flight though.

Here's my one challenge:

its most important value will be in:

how it handles the velocities and orientation of a direct overhead pass..........(the fork mount of the LX200 is perfect for such!)

Because the benefit of the proximity that an overhead pass affords gives one an ability to resolve something more than a point of light....

as the closer to the horizon a pass gets, the further away and the great increase in magnification is needed to resolve the same image!!!!!!!!

You can test this optical point all day long with planes that fly directly over you and the ones that pass to the side.....

wow, this is one impressive project. Very interesting . Are you a Windows software developer ?

Here's my one challenge:

its most important value will be in:

how it handles the velocities and orientation of a direct overhead pass..........(the fork mount of the LX200 is perfect for such!)

Because the benefit of the proximity that an overhead pass affords gives one an ability to resolve something more than a point of light....

as the closer to the horizon a pass gets, the further away and the great increase in magnification is needed to resolve the same image!!!!!!!!

You can test this optical point all day long with planes that fly directly over you and the ones that pass to the side.....

Certainly the higher the pass, the better for viewing, but 90 degree overhead passes are challenging due to hardware limitations of how fast the scope can move in alt-az mode.  Polar mode is a non-starter for my rig when it comes to satellite tracking due to the vibrations and the cheap wedge that I have.  It might be an option for the future though.  For now I'm confident the scope can handle ~60 degree high passes in alt-az mode without too much of an issue.  That would put ISS at about 460 km distance.  And of course you can still do higher passes, you'll just likely start to lose it near the zenith.  Consider also that while a ~60 degree high pass puts ISS a little farther away, it also gives you a different angle on the station and a different view.  In my experience the solar arrays are less edge-on and more impressive looking in "side" passes that don't go directly overhead, even though the station is a bit smaller in the view.

wow, this is one impressive project. Very interesting . Are you a Windows software developer ?

Thanks!  I'm developing it in visual studio.  I'm not a professional programmer though, I'm just mostly self-taught and it serves as a means to an end for some of the things I do.  This project has certainly been a great learning experience in programming.

Yeah, I've got an LX-200 and while there is much to be said for it, like most Alt-Az mounts I've dealt with the tracking gets a little squirrely near the zenith.

This is just an awesome thread! Keep up the good work and please post and updates.  I have been working with a much smaller Alt Az (not my 9.25 CPC) for getting a shot of the ISS.

We caught a tumbling rocket booster H-2A from a launch 4 years ago when watching the Perseid shower last week.  It was moving a bit to fast and not in my FOV for the cam and mount, but looked possible to track for about 30 seconds.

Here's my first video tracking ISS with the program:

The exposure on the camera was set pretty slow since I was on ISO 100.  That was just silly, I don't know why I didn't amp up the ISO a bit to get a faster exposure.  For this first test I also kept it at f/10 until I can verify that it's accurate enough at f/20.  The tracking was sufficient for f/10 but I need to make the algorithm more "aggressive" in how quickly it evaluates and executes corrections to the tracking to keep it steady for f/20.

I also plan to use a guide scope next time instead of a very wide angle lens to see if I can eliminate some of the jittering; I don't think a 50mm focal length lens provides sufficient guiding resolution for a 2000 mm focal length telescope.  The open loop tracking placed ISS right next to the crosshair in that 50mm lens, in fact it even put it in the FOV of the main scope at f/10, so it shouldn't have any trouble placing it in the FOV of an Orion ST-80.  Again, a bit of a silly decision, but I wanted to be sure ISS would show up in the guide camera and it's nice to see it works even with a ridiculously low power lens.

This is very cool. I wish my iOptron mounts could provide similiar capability. Any chance this kind of capability would work with other mounts? It seems most satellite tracking projects only cater to LX200 compatible mounts or higher end mounts from 10Micron and ASA, for obvious reasons. My understanding is direct access to the motors is important so I'm curious if other mount motors can be accessed in the same way, either through software development or hardware mods.

Fantastic! Eons ago I wrote my own satellite tracking software that ran on my wonderful old Apple IIe. The final product took 2 years to finish with over 30,000 lines of code. T'was a lot of fun to write and even more fun to use.

One other feature I didn't really mention was that it can also read ephemeris files from FindOrb to do open-loop tracking, so you can also do coarse minor planet tracking with the LX200 classic (which normally doesn't allow for direct minor planet tracking).  It's a bit coarse in right ascension due to coordinate format limitations, but it gets the job done for casual live viewing and it actually works better the faster an asteroid is moving.  I used it this morning to track a small ~10 meter asteroid, 2016 RB1, as it was about half the distance to the moon and closing in on earth.
https://www.youtube....h?v=-GSCBMmibAA

Unfortunately I'm in Florida so I didn't attend this latest launch.  I am planning on attending the fall Chiefland Star party during its final weekend from the 28th to the 30th.  I'll be demonstrating the software and will post a new video after I get back.