Errol, you are right, I am using these regular reducers that anyone can buy on Amazon, with that said I think both of them Celestron and Antares have very good quality mechanically and optically speaking.

Thanks everyone for sharing the experimentation! Has anyone tried the stacked f/6.3 reducers with a slightly larger sensor like the 825? I wonder how vignetting is vs a f/3.3 Japan reducer?

I have no direct experience with a larger sensor than the 829. However, I would speculate that as the physical aperture of the Meade f/6.3 and f/3.3 reducers are the same, if they are placed at the same position relative to a telescope's light cone, they should give very similar vignetting. What I'm not sure about is whether the twin f/6.3s  need to be at the same place in the light cone as the f/3.3 to get identical focal reduction. So I guess the short answer is I don't know for sure

I may be mistaken on this, but I thought I've seen posts mentioning the f/6.3 reducers have an improved use-able image circle over the old f/3.3's?

On a side note, during a conversation with Ron at Moonlite Focusers yesterday I mentioned this experimentation with 2 stacked FR's and the possibility for him the make an 'extra tall' 2" SCT tall FR focuser flange that would handle stacked FR's, and it is definitely doable.

My own experience with the twinned f/6.3s and the 829 sensor is that I definitely start to see distortions in stars in the outer part of the FOV when operating @f/3.4 or below (e.g Set-up 3 in the first post). So the effective aberration free image circle for me with the twin f/6.3s is probably a bit less than 8mm with this amount of focal reduction.  I've confirmed this several times with my C8, including last night. There is also the possibility of uneven illumination from internal reflections between the reducers, which seems sensitive to the overall focal reduction achieved.

Maybe someone with a pair of twin Celestron or Antares might have a slightly different experience, but I think I'm done with collecting any more f/6.3 reducers

I think it is the other way around:

I think it is the other way around:

Yep, my mistake. Thanks for catching it, Roel.

I was testing out my overall setup, with 2 stacked 6.3 reducers to get my C8 down to f3.8 as confirmed by astrometry site. A Meade and a Celestron, with the barrel from an Orion Shorty Barlow to add the amount of distance noted above. Besides a bit of distortion on the extreme right stars, I'm very happy with the results! 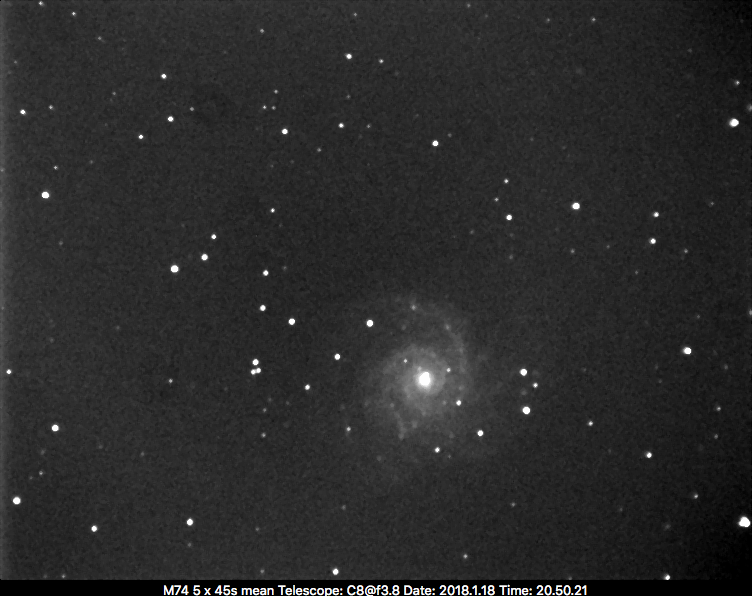 Looking good! Great to see yet another person try this out successfully with the C8/Lodestar set-up.

Can real-time flats be used in Sharpcap to reduce uneven illumination?

Though I am coming to the party pretty late, you seem to have an error in Post #6 about Setup 4.

And finally, thanks for this great thread! Still very relevant today.

Has anyone ever tested for aperture loss using these kinds of configurations?  If it is occuring, this might actually reduce the effective focal ratio.

With the C8, you only start with a fully illuminated image circle of around 7mm (at 100mm of back focus) and with aggressive reduction, the scope starts to loose aperture when the mirror spacing moves to what is required for 210mm image spacing.

If you stack reducers and are really running an f/3.3 configuration, if you are using 100mm of back spacing, I would think there is a chance that the aperture is being reduced.

Testing is easy if one has a laser.   Configure the scope as it is going to be used and focus it at infinity.  Since this is likely to be with a camera, then you would have to remove the camera for measuring the aperture, and you would have to replace it with an eyepiece and configure it with the same distance to the field stop of the eyepiece as was used for the camera (not moving the focuser from the infinity position).

Now you would simply position the scope about a foot from a wall, then shine a laser into the eyepiece so that it shines through the scope and projects the exit pupil on the wall, where it can be measured directly.

There is an SCT vignetting analysis on the web that has a lot of details about how back focus and focal reduction affects field illumination on SCTs.  The C8 really only starts with a fully illuminated field of about 8mm, so if you reduced that by 66%, then the remaining fully illuminated circle would only be 2.64mm and the illumination would fall off pretty dramatically (as is shown in the above images).  If configuration is suffering aperture loss though, the effective focal ratio (including secondary shading and transmission loss) could be well over f/4. Even at f/5, if 100mm of back focus is used, a C8 is right on the edge of experiencing aperture reduction.

Not that it effects me really.  I don't use SCTs anymore, but I was curious.  There is always a tradeoff when using extreme configurations and I am wondering if this much focal reduction is really giving an f/3.3 light cone.  I just thought that if forum members were not familiar with aperture reduction in SCTs that it might be something they want to know more about.

Though I am coming to the party pretty late, you seem to have an error in Post #6 about Setup 4.

And finally, thanks for this great thread! Still very relevant today.

Thanks very much for checking on this.

Hopefully that makes sense. I also tried to clarify in the post you linked to.

Yes, thank you, that starts to clear things up.

In Setup 4 you state:

In Setup 3 you state:

But then you don't specify what the adapter size is, so you are left guessing.

When you get to post 6 and do the math you see that the adapter is ~16mm and can then determine that the total spacing from sensor to 1st FR in Setup 3 is 89. Or I suppose you could just add the 11mm from the Setup 4 total distance. Now I have the complete picture, unless I have misunderstood.

And I am assuming when you state 1st reducer you are referring to the closest reducer to the sensor and not the first actual reducer in the optical chain (the one attached to the OTA).

Yes, thank you, that starts to clear things up.

In Setup 4 you state:

In Setup 3 you state:

But then you don't specify what the adapter size is, so you are left guessing.

When you get to post 6 and do the math you see that the adapter is ~16mm and can then determine that the total spacing from sensor to 1st FR in Setup 3 is 89. Or I suppose you could just add the 11mm from the Setup 4 total distance. Now I have the complete picture, unless I have misunderstood.

And I am assuming when you state 1st reducer you are referring to the closest reducer to the sensor and not the first actual reducer in the optical chain (the one attached to the OTA).

Yep. Your understanding is correct on all points - approximate thickness of Meade SCT/T-Thread adapter is about 16mm, and by 1st f/6.3 reducer I did mean the reducer closest to the camera sensor. If there are other details that I can help with, please PM me if you like.

Heh, at least I know someone is reading my old posts.

Edit: I can't remember the last time I measured the thickness of that SCT/T-Thread adapter and all my astro stuff is boxed up at the moment, but I will check it down the road. If I'm off on that 16mm estimate, I'll update the posts.

Yes, this thread is very pertinent to my research around my next scope (probably an SCT though I am still deciding whether a 6" or 8") so thank you very much for it!

Along those lines, another question:

It is possible to get slightly more reduction out of the twin Meades than I have shown, but I ran out of focus on the C8 approaching f/3.0 with this combination.

Were you able to achieve f/3? How were the images?

Reason I ask is because, in whatever scope I do decide to purchase, I want to try to stay around 100 X for magnification, and in an 8 inch SCT that means focal reduction of right around 3.0, given that the camera behaves like an eyepiece with a 6 mm focal length. Alternatively, I could go with a 6 inch SCT and use a more modest reduction of about 4 (which seems to work quite well with stacked 6.3 reducers).

No, I could not reach focus at f/3.0 with the C8, unfortunately. I don't have anything saved at faster f/ratios than shown here, as I was not interested in marginally reducing the f/ratio by an extra 0.1 or 0.2. As noted, I prefer to operate at around f/3.9 or f/4.0 as the aberrations at the edges were slightly worse at the fastest f/ratios around f/3.3.

If you use a C6 -  which I have subsequently used a lot more recently - vignetting is more noticeable to me with the same set-ups discussed in this thread. This is probably because of the smaller baffle on the C6 (27mm) versus the C8 (37mm). I notice it in H-alpha with the C6 more easily, but that is for another thread....

I hadn't even considered baffling.

Yes, it's obviously going to be much more "comfortable" working at less extreme reductions which is why I am steering toward a 6 inch SCT as opposed to an eight. The 6 inch SCT running at about F4 will result in a 600 mm focal length which, when coupled with my EAA small-sensor cameras, will result in about 100 X magnification, which is the sweet spot for my galaxy hunting ambitions.

Plenty to think about. Thanks again!

Thanks, Roel. At some point, I thought about trying all three reducers in series to get more reduction, but that is a lot of glass. Also, I suspect aberrations from having 3 achromats in the optical train might be a problem. It would be interesting to hear if anyone has a similar experience using just twin f/6.3 reducers.

I successfully paired two F/6.3 reducer correctors last night for the combined F ratio of 3.97. I imaged NGC 6888 and NGC 6781 with very good results, for which I will post my images shortly. Focus was a breeze and I was using my iOptron ZEQ25 mount for precise goto and tracking results.

For those who wanna use two antares 6.3 reducer to get stacked... Dont, they wont screw into each other for some reason, but a single antares with another brand had been done however.

Has anyone tried the f6.3 and the f3.3 stacked together?

would that give roughly f2.0?

ill get them out with my 10” sct later, when it’s not raining.

i have a meade LPI-g advanced monochrome small sensor 2.4um ccd I can use.

what concerns, consideration=tions should I check?