Started by Al Paslow , Sep 24 2016 09:34 AM
This topic has been archived. This means that you cannot reply to this topic.
8 replies to this topic

The next Lunar Buzz Saw will be visible in the early morning hours of Monday Sept 26,2016 before most of us get up to go to work.

This should be a good one with the co-longitude at 210 degrees and will provide us with the longer strong shadows in Sinus Iridium that we are looking for. Just view the moon rising in the eastern sky sometime before dawn under a small telescope is all that is necessary.

So, it's a heads up if anything. In the Greater Pittsburgh area where I live the weather forecast is calling for cloudy and rainy skies. If so I will miss a photographic opportunity.

So "Buzz Saw", strong lunar shadow event or whatever name you wish to use, it is a very beautiful thing to see. See prior posts on this subject.

If anyone does let us know.

Hi Al, as usual, thanks for the heads up.  If the weather is good, I'll be out there.  Al, is the buzz saw effect the same feature that Astronomer Patrick Moore refers to in his Moon books as the "Jeweled handle effect"?  Here is what he says, “When the Sun is rising over it (Sinus Iridum – Bay of Rainbows) the peaks to the limbward side are illuminated before the floor of the bay itself, producing the famous ‘Jewelled Handle’ effect. It lasts only a few hours, but is worth waiting for.”  Also, wondering if you saw my article about the Moon in the October issue Sky & Telescope magazine? It is on the last page, 84, "Focal Point."   Mark

The "Jeweled Handle" or the Golden Handle  is the sun rising in the morning on the moon and as it does the tops of the Jura mountains begin to emerge from darkness into sunlight. The peaks become brighter and brighter as the sun slowly illuminates them and also the Bay of Rainbows. It is strikingly beautiful.

The Lunar Buzz Saw is a sunset effect, and light comes from an entirely different, and mostly opposite direction. As the sun recedes the light shining into the Jura Mountains casts their  circular rugged shadows into the Bay of Rainbows. Whereas the shadows appear with ragged "teeth", from the peaks and the result appears to be in the shape of a circular saw blade, hence the "Buzz Saw" name.

In the Jeweled Handle the most striking effect is the glowing light of the mountain peaks. While the actual Buzz Saw is only the shadow effect that looks like circular or rip saw blade.

It is true that with the Buzz Saw like the Jeweled Handle, sunlight creates the dramatic effect.

I made a series of rough diagrams of each below. They are not perfect by any means and do not represent times of the best effect of the Jeweled Handle or the Buzz Saw or sun angle accuracy but perhaps they help illustrate differences between the two events:

One of my fav areas, Moon Maiden

Hey, Al.  Thanks for taking the time to explain and show the differences between the Jeweled handle effect and buzz saw effect. The photos really helped me visualize the differences.  I think I have probably captured the jeweled handle effect before in one of more of the thousands of images I shot of the Moon.  I am on a mission now to see if I have any shots of it in my photo archives. By the way, this morning was a bust for me. Raining and misty this am before dawn and still overcast as I write this.  Therefore, I missed the Buzz Saw effect this morning.  Have a great week. Mark

Like everything else in life it's fun to observe and image when we have good weather and the time. I always appreciate your efforts. The Buzz Saw unfortunately comes very early in the morning unlike the Golden or Jeweled Handle which is an enjoyable event because it often occurs around dinner time making observing less of effort. So please have fun with all of this after all this is our passion never an obligation. Rest and free time are certainly some of our greatest assets!

l did get some images today that I will post this evening. The conditions were not very good for imaging but at least I was able to observe.

I like your plan to look through your image stockpile for Jeweled Handle pictures. Please if you find any be sure to post them. 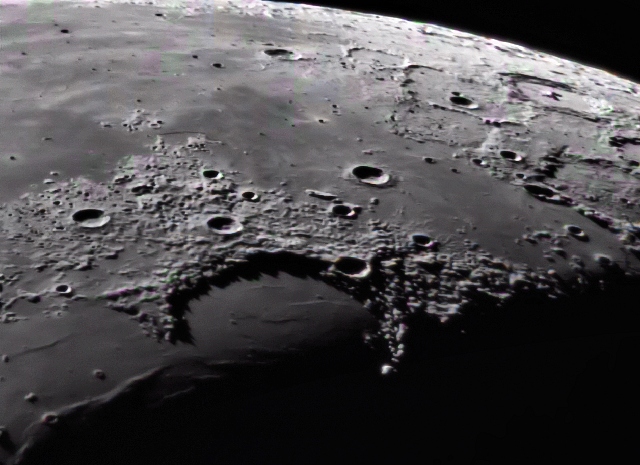 With less than favorable conditions I managed to get a picture of the Sept 26 event with an ASI 120-MM camera.

Very dramatic! Thanks for sharing it.