I got mine a few weeks ago and I tried using AstroImager and it works great.

UPS delivered my ASI071MC Pro about 10 minute ago. I hopped onto ZWO's web site and downloaded the latest drivers, installed them, plugged in my camera and TEC power supply, and fired up Nebulosity. The camera connected fine and I was able to take a quick test image. I am using the ASCOM driver and at least from there it looks like the gain has been limited to no higher than 240. No big deal since I normally used a gain of 200, but when using my Mak 7 at f/15 I did sneak it up to a gain of 300. I'll leave it at 200 for now and see what happens.

For those of you who have received your Pro upgrade, Have you tried the AstroLive USB software with it.  I use this to focus and such as it allows continuous frames.  Mine keeps telling me there is no ZWO camera attached.

Turns out AstroLive USB isn't updated that often so the camera list is not updated on the latest downloadable file.  Dave at ZWO sent me the SDK with the updated file to allow it to work.

I have been following this post for some time and based on your comments have ordered the camera.

I will be using it with a Hyperstar here in Arizona.

What steps should I follow to get it up and running?  You know software flats, bias etc.  I am anxious to get going as soon as it arrives.

Hi Peter, Assuming you have the correct spacer to use on the hyperstar for the ASI071MC Pro Here is what I would recommend in your setup.  Software, PHD2 for guiding, SGP Pro for taking the photos and controlling equipment, and PixInsight for post processing.  Hardware, 60mm guide scope, Mono guide camera, Dew shield and heater, and I use an autofocuser but you can use a bahtinov mask.  There are lots of videos on youtube.com on creating bias, darks and flats so not going to go over that here with the exception of the flats part because of the Hyperstar. For flats on a hyperstar I use the dew shield and a tshirt covering the dew shield and just pointing at a place in the sky where you get an even light source(During the day).

My advice on taking photos using hyperstar would be to not overexpose the image which is easy with the f ratio of 2.

I would not use the 071MC Pro with hyperstar. The Pro has a much larger diameter body and is heavier than the prior version.  The 1600 Pro might be a better choice for use in a hyperstar setup.

I've never had an issue with my ASI071MC Pro when using it via Hyperstar.  Really wished they had a version of Mono camera that was APS-C or Full Frame.

Thanks for all the input guys

I spoke to the folks at Starizona and they sell lots of the camera for use on hyperstars so I hope that it works okay.  One has to be careful around the Hyperstar as knock could break the corrector plate.  My camera is somewhere in hyper-space.  I am like a kid on Christmas.

I have done a lot of astrophotography with a Canon DSLR and look forward to the next step.

You'll love the new camera.  As to breaking the corrector, It takes a lot of weight to do that.  Check this out.  https://www.youtube....h?v=ool3pnpmAt4

I moved to my original ASI071MC from a modified Canon and I loved it! My Pro is about to finish it darks and it may see first light later this week. Once you get is sorted out I am sure that you'll enjoy it. The Pro is only a smidge larger and heavier than the original.

I found with the upgraded 071 that I'm not even using darks, just bias frames. Maybe just cause its new? Maybe could have done it before the upgrade?

Based on what I am seeing with my darks, the Pro may have much lower noise than the original. I was also pondering whether darks are really needed, but they are pretty easy to take. Two mare sets to go and I'll be finished.

I found with the upgraded 071 that I'm not even using darks, just bias frames. Maybe just cause its new? Maybe could have done it before the upgrade?

I noticed the darks are much cleaner on the Pro, too. Could be something to do with the improved cooling system and DDR buffer?

Yes I am looking forward to my my new camera.  I have done just about all the big stuff at F2 and am now going after the faint and fuzzies at F10.  I have just finished using O3 and HA on the Rossette to add to my RGBs.  These will be my last shots with my faithful Canon.

I had first light with my ASI071MC Pro last Sunday. Conditions were pretty tough, but I wanted to test out the camera after several weeks of nothing but cloudy nights. Temps were in the low single digits when I began and -2F when I finished. I used a TV NP101 refractor at f/5.4 and an IDAS LPS-P2 light pollution filter. Subs were 30 x 300s at unity gain, camera cooled to -15C. Flats and darks were also applied. The darks are mismatched at -10C, as I haven't had a chance to take some -15C darks yet. I had previously experimented with flat frame ADU values and found that 25K (at 16-bit) works best. As the image and all subs show, the NP101 suffered greatly from pinched optics during the session, even with a dew heater on the front lens cell running at full power. Should have had a heater strip on the rear lens cell as well as the front. High clouds moved in during the latter part of session also. The image, which was quickly processed, isn't too bad, despite the star aberrations. I think the camera performs well. I do find that it doesn't hold the set point cooling temp as well as my 1600MC-C. Also, while my 1600 could reach a -20C set point at room temp (66F), the 071 requires full power to reach -15C, and can't hold it steadily bc of the full power draw.  I'll shoot the -15C darks in the colder garage. 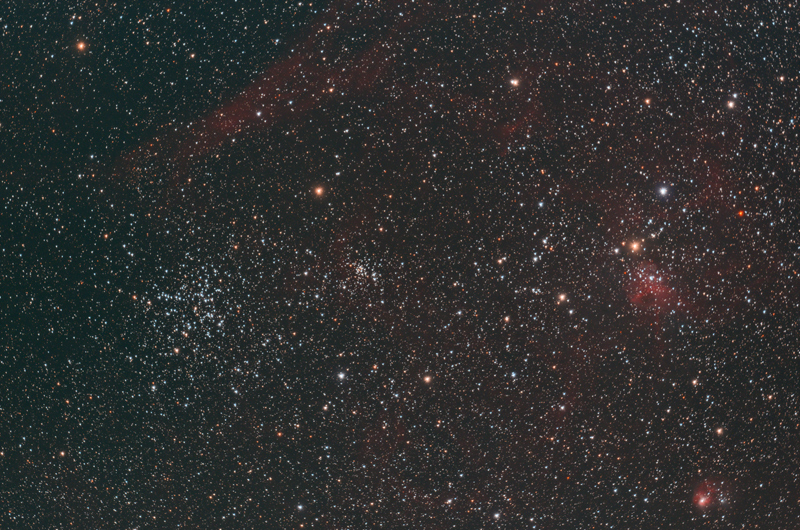 Hi,
here is a test shot takenwith my new ASI071 Pro under a half moon a couple of weeks ago.

Only stretching, color balancing (non calibrated cheap monitor) and noise reduction in Pi, no sharpening/deconvolution.
Very basic processing as I have not used PI before.

Just a screen grab as reducing it to a standard jpg killed the detail.
cheers Gary 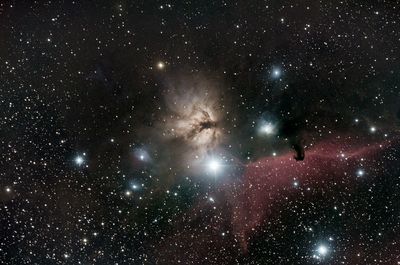 Gary and Glutch, nice images with the new cam!

What's kinda sad is that while waiting for my camera to arrive I think that I missed a grand total of 2 clear nights. Anywho, I am soooo glad to be back in business!

Please help. Can any 071 owner take a look at this link?

Is your 071 with same histogram shape? Is it very noisy after calibration? I wonder if mine has issues... but it does take great photos at day time.

I have just gotten my ASI 071 up and running and await clear skies.  The camera keeps dropping out and seems to be caused by a poor cable supplied with the camera.  Before the ZWO chat site went down, others stated there that they had the same problem.

Question: Have any of you had this problem?

If you are waiting for clear skies in AZ, there is no hope for us in Washington state! LOL