I prefer wood tripods [i.e. Berlebach] to aluminum. They're more massive than aluminum and very sturdy [they're also better looking in my opinion].

However, I take the aluminum tripod when I travel bc I'm not scared to throw it in the bed of the truck and ride off with no worries.

I really like your setup. Now I need to hunt a Berlebach...

Interesting to hear that. Pentax quotes the field stop is 46.5mm. Is the 1.16deg field what you’ve actually measured?

Just for kicks, I tested out the Pentax 40 XW in the Mu 210 last night and pointed the scope at Luna.

Surprisingly, I couldn't detect any vignetting as the Moon drifted towards the edge of the field. There was a bit of chromatic aberration from the eyepiece, but no dimming / darkening on the Lunar surface.

I was using a Vernonscope Quartz 2" diagonal.

I really like your setup. Now I need to hunt a Berlebach...

Congrats.   When will you receive it?

Congrats.   When will you receive it?

For the Mewlon, the estimate is for February. Of course I wish I could have it now and take a peek at Jupiter and Saturn, but I will need to be patient. Oh well, at least it gives me time to get a pair of decent eyepieces since I don't have any high quality ones. Just what came with my Skywatcher telescopes.

For the Berlebach Planet, I can't find it in the US. Some places have it on sale but when I placed an order they canceled. I might just order straight from Germany.

Of course I wish I could have it now and take a peek at Jupiter and Saturn, but I will need to be patient.

Here's a peek at Jupiter for you

Well, my trigger-pull on a used, new-model M-210 was delivered today. Of course, I have clouds because - new scope - but it's a beautiful sunset. Hopefully I'll be able to get a few peeks at Jupiter, Saturn, and the Moon tonight.

Beautiful setup, I'm sure you'll love it like I enjoy my 180c.

Do you plan on doing some compares against the C9.25 and maybe the older C8 I see in your sig? It would be interesting to read on how these fine scopes compare to one another.

Beautiful setup, I'm sure you'll love it like I enjoy my 180c.

Do you plan on doing some compares against the C9.25 and maybe the older C8 I see in your sig? It would be interesting to read on how these fine scopes compare to one another.

Thanks. I'll definitely be doing some comparisons when I can find the time. The C8 will be easy since it's on its own mount. The C9.25 will be a little more of a hassle since I'd have to swap it and the 210 on and off my CGX. Eventually I'll get around to it. 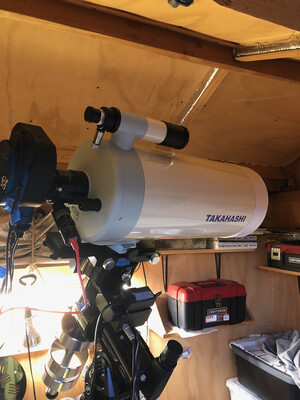 Congrats!  I really enjoy mine.  They're beautiful scopes.

I was hunting for info on the Mewlon 250, trying to detect whether the older 250's have the same diameter fitting on the aft end output, when I came across this thread. At 25 pages, it's the longest I've ever seen! Having had the pleasure of speaking with Carson, and sharing a few e-mails with him, I'd say that given a chance to read what he has to say - it's worth one's time to work through all 25 pages!

I started into astronomy 26 months ago. My earlier years in life were spent being a kid, and then into the military where I became a pilot, and then into commercial aviation; a total of 28 years of flying. My eyes were very good. I gave up flying at age 50, and as of now - age 62 - my eyes are still functional, but there are many issues.

So, please take any comments concerning what I've seen, through telescopes, with some caution.

I had a 6" Meade Newtonian, to start. I started during planet season, late in 2019, and took 2 weeks to decide that I wanted something larger. I got a used C14. That helped some! Got started with a TV BinoVue, and enjoyed looking at the planets and moon with that. Wanting to try some imaging, but having trouble with learning on a 3,910mm focal length, I looked around for a small refractor to use as a guider on the C-14, as well as for wide field imaging. I settled on a used Takahashi FS-60CB.

The first time I opened that FS-60 up, on the moon, with a 6mm Delos, I was floored! WOW! The view was quite different from what I'd been seeing through the C14. Delightfully vibrant! The C14 view appeared as a month old pizza, while the FS-60 image was what you see as you watch you pizza being pulled from the pizza shop kiln. Maybe the C14 pizza was 2 months old... whatever it was, it was absolutely killed by the Tak view.

Within a month of seeing the light in the FS-60, I came within a day of buying Dr Who's TOA-130, in the early summer of 2020. Just missed it... I ended up with Tyson M's TSA-120, which I thoroughly enjoyed. Still, there were times when I wanted, or perhaps needed, more focal length. It took about 9 months to work my way around to doing it, but in March of 2021 I came across an ad for a Mewlon 250. The ad left me with a few questions, but I threw caution to the wind and offered full price. The seller wrote back and said "sold, to you", and that he'd had quite a few responses to his ad, but they all were asking for information. Mine was the first full-price offer.

I'm glad that I acted a bit rashly, for the results have been wonderful. I did have some collimation issues, which I've never deciphered scientifically. I find the collimation process to be a horror. The way I resolved it was to throw my hands up in surrender, and to run the secondary bolts so that the secondary moved all the way forward to the stops. I was going to start anew, after doing so, and the night I took the scope out to start anew, from the stops, I looked through the eyepiece at the moon and all the fuzziness that had been in the image before, was now gone. Someday, I may mess with star tests in order to fine-tune the collimation, but for my eyes as they are, what I was seeing looked perfect to me.

In order to show what I was comparing it to, I had the Mewlon 250 up on a side-by-side mount, along with the TSA-120. When I used to have my C11-Edge up alongside the TSA-120, there was a clear winner on planetary views. The C-11Edge had as much of a 2-month old pizza look as the C14 had had. Compared to the TSA, the contrast in the C11 Edge view was terribly lacking.

When I switched out the C11 Edge, and popped the Mewlon 250 in its' place, I was quite surprised to see that when I stepped from the TSA to the Mewlon, I did not see any decrease in contrast. The view through the Mew was as vibrant, lively, and real as the view through the TSA. Wow...

Is that a scientific assessment? Of course not. But it left me feeling that I had not interest in using the C11 Edge for visual purposes, now that I had the Mewlon.

I got the fever recently, for more refractor aperture. I sold the TSA-120, and was gunning for something closer to 200mm; used, of course. I considered a 70 lb 200mm Zeiss doublet in an A-P tube, but recent backaches from toting 60 lb concrete bags around convinced me that 70 lb scopes are not something I ought to be hoisting up and setting down. A CFF-185 nearly made it to me, but a local cash buyer snagged it. As I pondered what might come next, that would be affordable to me, Dr Who's TOA-150B popped up, and as with the Mewlon, I felt that it was better to act now, and beg my wife's forgiveness later. I got it, and she hasn't noticed yet. So the apology and begging are on hold.

What I do know is that I am delighted with the TSA-120, and the TOA-150, and the FS-60CB, but for planetary viewing, When I want to really see some good detail, I will roll out the Mewlon 250 and wait a few hours for it to be properly cooled. If the seeing permits, it's by far the best thing I've got.

I am hoping to get some imaging done on the planets, with the TOA-150, but I'm also hoping to get the Mewlon 250CRS set up for imaging as well.

If you haven't looked through a Mewlon, try to find a way to do so. It's a remarkable view!

Happy holidays to all, CS, and GS (good seeing).