168 replies to this topic

Here's a photo of Venus from March 9, taken in the daytime with Venus at an altitude of about 59°. Its 52.6', and therefore larger than Jupiter ever gets. For those who enjoy standard units, it was also just under 30 million miles away, which may be the only time I've looked at a planet that was that close.

This picture is in IR. Seeing (or tube currents) were terrible in green and blue, but IR and red came out pretty sharp.

After a 15+ year hiatus I've come back to astrophotography. I came across the small bore challenge so I thought I would give Venus a try.

Currently waiting for a C8 OTA and haven't decided on a dedicated planetary camera so I removed the lens from a Logitech Webcam (640X480) I had laying around, mounted a 400 mm f/5 short tube on a CG5 this afternoon and went after Venus.

Seeing was horrible on the coast with fog and clouds rolling in but I did manage to get one 30 second clip which doesn't look too bad considering this is my first stacked video exercise.

Used SharpCap to capture and AutoStakkert to render a tif file which was processed in Photoshop 6, nothing fancy, just enough to pull an image out of the file. Can't wait for the C8 to arrive and then purchase a decent camera.

According to SkySafari, Venus is 3.6% illuminated and has a apparent size of 57.5 arc seconds. With the drizzle the image scale shown below is just about 0.28 arc seconds per pixel.

I started imaging very recently.  This is the second or third image after getting my ASI120MC camera around a month ago.  I used my AT72ED and 2x Barlow.

I've been dying to try and shoot the current Inferior Conjunction of Venus, but the only OTA that I have that is light enough to be mobile, and attempt to find a clearing that low to the west, is my little 80mm APO , with only 560mm focal length, mounted on my photo tripod.

Last night was a complete bust with a heavy cloud deck to the west. Tonight looked only "slightly" better, but right at sunset, all of the clouds evaporated..... but not the geese. 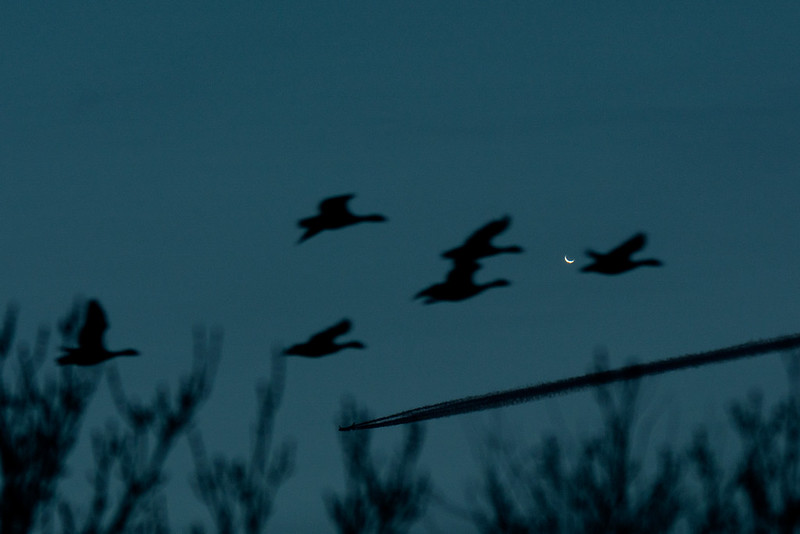 I really like that photo, Dave.  A plane, flying geese, and a crescent Venus, all in one image - good work! 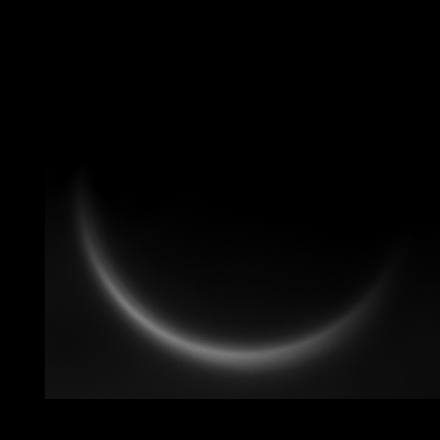 Venus on 3/23/17  w/ ED80mm f/7 w/3x barlow, I.R. pass filter, PGR Scorpion camera, captured in fair seeing and processed with AstroIIDC.  Stack of about 200 frames.   Went out to try for the IC this morning but cirrus clouds moved in and have covered sky since.

Venus is now back into position to capture some good cloud detail in UV.  I had a quick session with the VX6L this morning at about 9:30AM before the sun came above our trees, warming everything up.  Seeing wasn't half bad. 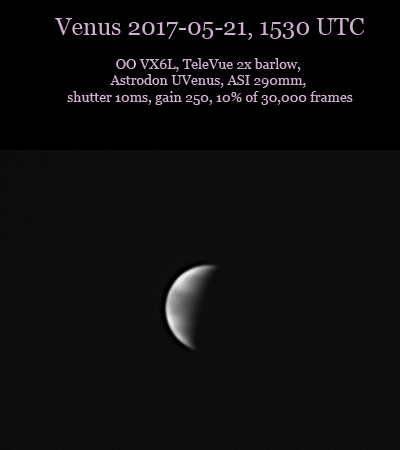 One of your best, Darin!

Thanks.  The optics on this VX6L are very good.  Much better in UV than my C6 SCT.

I haven't had a chance to point it towards Jupiter yet, though...

Another this morning, around the same time.  Once again, seeing cooperated. 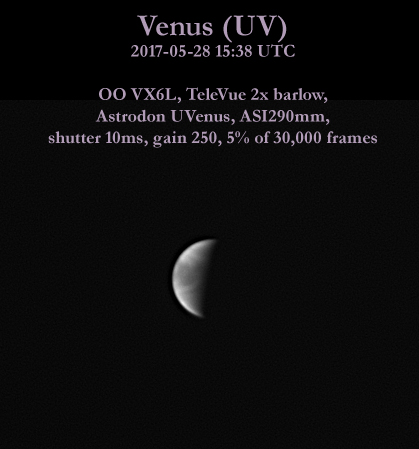 Another shot this morning.  Seeing wasn't so good... 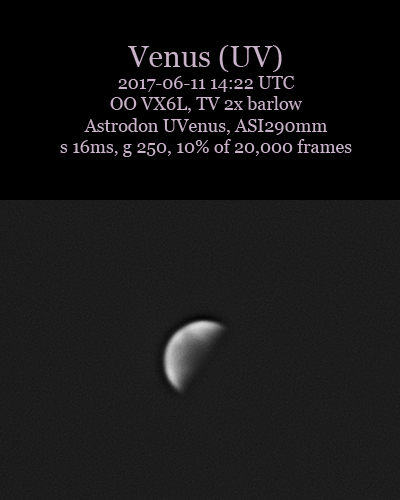 Great sequence, Evan. I hope to get my efforts in here soon. It's interesting to note that one wishes for both atmospheres to cooperate… Earth, to provide good seeing; Venus, to provide nice details.

I'm sure the Venusian atmosphere is always pleasing from our point of view.  However, our own atmosphere (at least in my location) has not been very cooperative the last few months.

Here is my second real try (i.e., not a thin crescent) at Venus in UV, and the first time I see the distinctive sideways Y. I started imaging right at sunrise – the blue cast to the sky must have decreased contrast, but the seeing was very good and Venus was at 31° altitude.

Nexstar 6se, ASI1600mm, UVenus filter, no Barlow. Used 1291 out of 4400 frames. Second out of five consecutive attempts. Others were a bit worse, mainly tracking pushing Venus out of the small capture window I was using to maximize framerate at about 80/second. 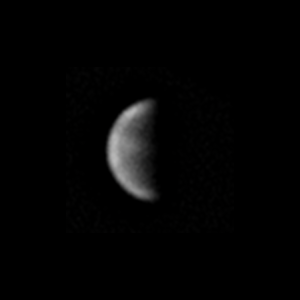 A week of high pressure means consistent viewing. Here is Venus in UV 24 hours after my last picture.

I took the two images and map-projected them, and I'm presenting them here together. The true east-west displacement is unknown, but the average is 80.5° per 24 hours, so I used that. These images almost join, but not quite.

I'm quite excited to get a distinctive pattern that is seen often on Venus. Some full-disk UV pictures of Venus taken by spacecraft show a pattern quite a bit like this, minus the artifacts.

I hope that when Venus is more gibbous, I get 4 days in a row to make a complete 360° map (one snapshot of a cloud deck that is always changing) with no seams. 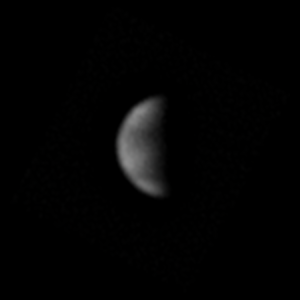 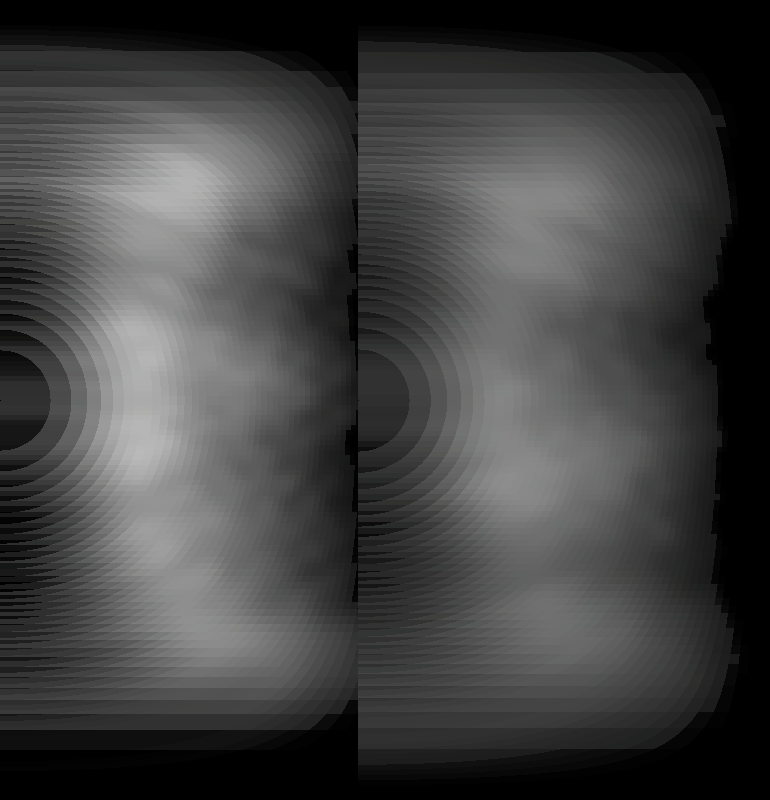 Today was the last of six consecutive days I had the chance to image Venus at sunrise. The results were notably better on days #1, #2, and #6. As the rising Sun was directly lighting and heating my telescope as soon as each session began, speed was of the essence. Local geometry didn't allow me to start any earlier than I did.

Given a cloud rotation period varying from 3.9 to 5.2 days, this should be close to the same view as the two images I posted earlier in this thread. I think it looks a bit closer in appearance to the 20170613 result than the 20170614, but that'll merit further analysis. 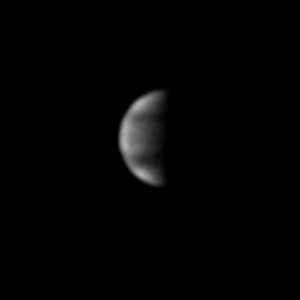 Conditions remain good, but I'm going on vacation, so this sequence will have to end at six days. I hope to repeat this exercise in July with a fuller disk so that 360° coverage is possible.

Darin and rehling, all nice work. Thanks for sharing. 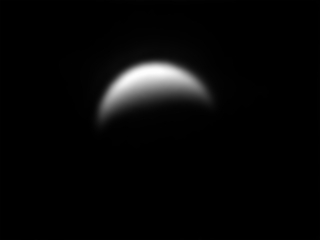 Got some time in this morning.  Seeing was better. 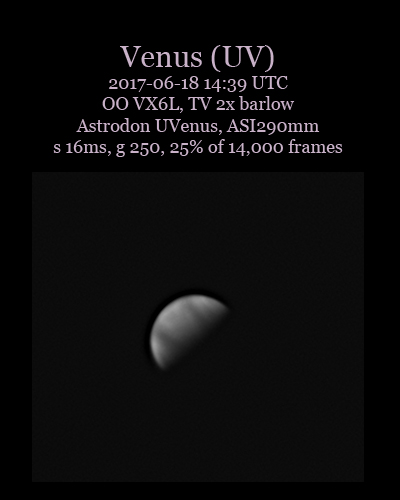 I was glad to see, evan, that your Venus image and mine, taken about 90 minutes apart, gibe (as they should!), and it's clear that yours is more detailed; I'll try using my Barlow next time… Previous experimentation revealed that my Barlow blocks about 60% of the light. If I use the 2x Barlow, my exposures will jump from 6ms to about 40ms, which will allow post-sunrise heating of my scope to interfere more. Which is better… only a new experiment will tell. I wish I could image Venus before sunrise, but my surroundings just do not allow that!

The biggest issue for you is that you're using an SCT.  At UV wavelengths, the correction of an SCT is terrible (think 1 wave or worse).  I tested this on my C6, which is excellent in visible light - using a star test it was horribly over-corrected in UV.  This makes the scope act like a much smaller scope in terms of resolving power, as you can never achieve sharp focus.  The reason for the change in correction is the corrector plate - as a refractive optic, its figure is optimized for visible light.

Since a Newtonian uses all mirrors, it does not suffer from the same problem.  I've been using one (VX6L) for all of my sharp Venus images.

In my earlier posts, you can see the difference between my C6 and VX6L - the C6 never shows sharp detail, despite some nights of pretty decent seeing.


Also tagged with one or more of these keywords: astrophotography, planet