I stayed in,,the wind sounded too bossy for me.,I want to observe.,not fly my kite.,AND I didn't get the deck shoveled.,Maybe today I will clear the decks.,I really am lazy.,considering that with JD I can snowblow right up to the door.,and just kick away snow left there.,I should at least be willing to do the deck.,I can just slide the snow off for the most part.,oh well.,it will all melt soon enough.,lol.,

I coulda sworn I typed SW and for some reason it came out Serena.   Ok didnt “get out” Dave...  too wimpy.  I was perched in my comfy chair looking through a pane of glass.  If it hadn’t been for the wind I probably would have had the OS outside, the sky was that nice.  Have you noticed all the satellites?  Seemed unusual to me.   Maybe just timing and clear sky, dunno

When it's in the single numbers and windy outside it's "wise" to stay in not "wimpy".,that is what I tell myself anyway.,lol.,I still didn't clear the deck,so I am inside looking out as well.,last night it was 9* by 5:30.,now it is 4*,.

My darn tracfone has started sending me promo's at 1am.,today is the second time in a week this thing has started beeping at me at this hour. And it keeps beeping tillI getup and shut it off.,gotta figure out how to stop this nonsense.?lol.,

My darn tracfone has started sending me promo's at 1am.,today is the second time in a week this thing has started beeping at me at this hour. And it keeps beeping tillI getup and shut it off.,gotta figure out how to stop this nonsense.?lol.,

Do you have a tracfone account on line? You can log into that and change preferences. Or maybe replying to the text message with the word STOP.

I had today off, and was going to do all sorts of things. Woke up feeling ill, only managed to walk the dogs and feed the goat. Feeling a little better, took a long nap in the afternoon. Got woke up during that by a phone call from work! The dogs, who were napping with me, were disgruntled.

I see on Craigslist that someone in New Hampshire has three posts for a Celestron C8 SCT. The fist post was asking $449, an odd price, and below what is might be worth. The second two are duplicates, and are asking for $650. The same poster is also offering a 10" SCT for $1550, with a duplicate post with no photos.

I texted the person, they said they couldn't talk. All very strange...

I did not get out last night.,no nap so I barely made it past Miss Peg's dessert.,I did get the deck cleared so if the stars are all aligned.,and the force is with me.,I will get out tonight.,best to all.,

Edit.,Scott., I did learn that my phone turns off.,like all the way off.,by mistake.,I thought it was dead.,The battery had died and after charging still nothing.,then.,I wonder what happens if I push the button marked power/end.,WOW. learn somthin new every day.,lol.,Who hired this guy.,

Well, no real astronomizin' going on for me. Just don't have it in me when the temps keep this low. I've been watching the Moose for a few days and will continue having the pleasure of our early morning sojourns until Monday. The Moose is really beginning to show his advanced age. Even his bark has soften to the equivalent to a persons best "library voice"  and the cold isn't easy on his old bones. His new home on the farm has a small river running along one property line so he has been able to enjoy swimming in the river during the non ice months and that has been a great  bit of canine therapy allowing a reprieve for his stiffening joints. If all goes well, the river will be open to him by late April and hopefully aid his motion.  At 2 am  the Moose and I were welcomed by stars in a dark sky. Not the velvety black background that displays them at their best. but the stars seem more to shine from the bottom of the old coal bin. Considering the -3°F air temp that was a little disappointing.

We must have had some warm air pushing its way overhead, sure wasn't any warm air hugging the valley floor at the Cider House as we watched the wood smoke race upward through the frigid air . I must be a closet masochist why else would I purchase an indoor/outdoor thermometer with wireless sensors allowing me to watch the temps plummet in the Cider House as I sit in the Archie Bunker chair that has become my winter home. While I wear my new Cuban T shirts and my Che' olive green People's Army cap wondering when el Presidente will offer to buy Cuba so I can add my Cuban T shirts to my official state collection. Gosh, I did it again( Grey no politics allowed  in here) sorry.

Stay warm Princes of Maine, Kings of New England, Knights of the Realm and Jesters to the World. 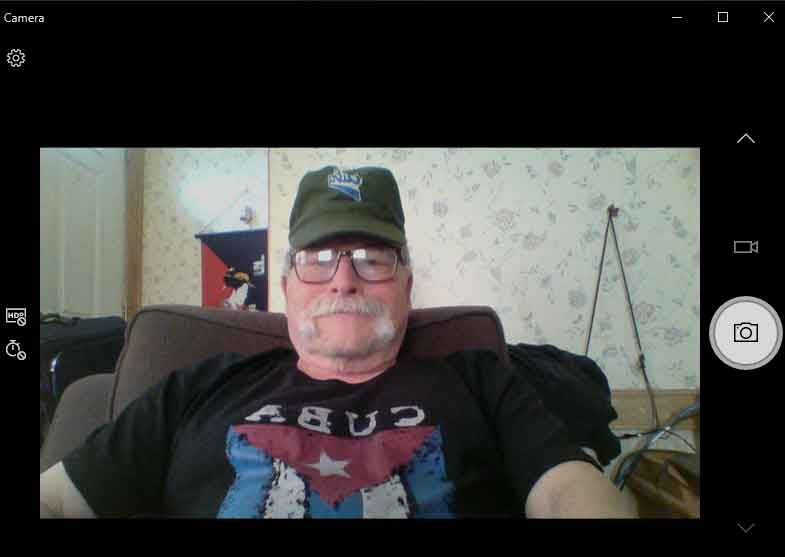 Don't you just love those Trac fones, Dave. I have one that has been my " I've fallen and I can't get up!" carry along for at least 5 years. Actually my second Trac Fone  the first should have had a " Help I'm in the washer and can't breath alarm" It might still be with me.

The current one from time to time decides to put its self on " ring twice then hang up mode" then it takes me forever to find the place to change that setting back to normal on the menu.

Life in the Kingdom

I know it was my bad.,half asleep wondering who is texting me at 1am.,then I turned it all the way off.,unknowingly.,lol.,life in the fast lane.,

My son had 16 below this morning in Chesterville.,I had 18 above here.,go figger.,I stoked the stove good cause the forecast said low of 5.,not even close here., but much colder just a few miles away.,I know I'm pretty hot.,but.,lol.,

Tonight's cds is calling for more of what Gray saw this morning.,lots of moisture.,not a good night for fuzzies.,

Here is my green gorrilla hat,.lol

I didn't realize it was picture day!

I'm wearing a JD cap, but never owned a JD - we had a Case. I keep my Nikon gear in a bag labeled 'Canon'. And my Celestron Nexstar is stored in a bag marked 'Meade'!

I believe in misdirection. 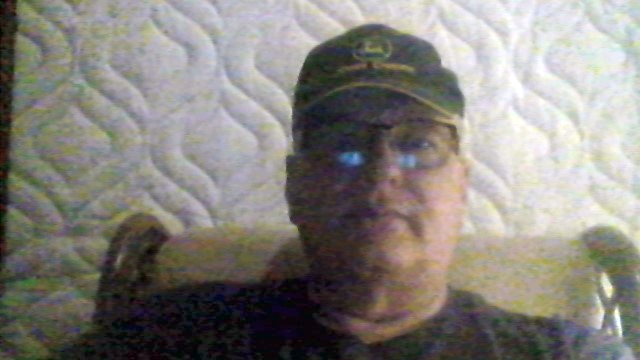 My other new Cuba T shirt.

Just made for the Cider House Body Shop. 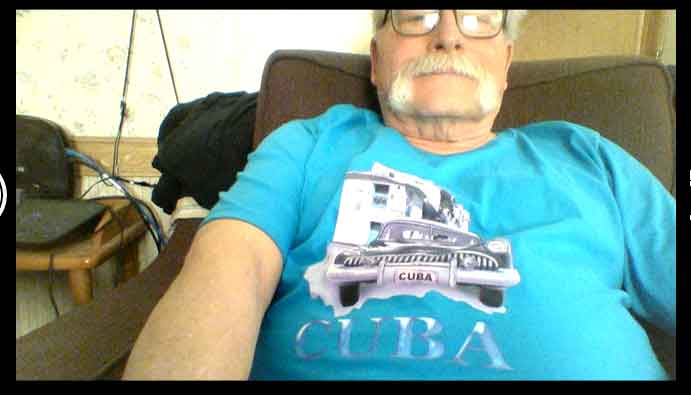 Here is my latest tee from my daughter in Or. She made the hat as well.,

Just in from chores for a snack and reading the mail.  Good looking bunch of astronomers.  Dave, you got us all beat in the whiskers catagory.  I believe you better be careful when spinning the slow mo or focus knobs, you could get all hung up!   Tried taking a pic of me but the kids left that aging filter on by the looks of it and I can’t seem to be able to turn it off?  I liked the one that does bunny ears and nose better 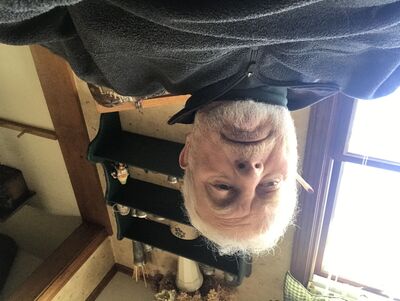 Just checked CDS and I think the Onesky and I have a date tonight outside.  Looks promising and not too cold.  It’s been waiting patiently in the garage for quite a while.

Same here.,my cds looks pretty good.,I see high thin clouds now.,maybe the 102 and Tubbs.,make hay an all that.,lol.,If the trans is good I would like to point Tubbs at a few fuzzies.,and push the power on a few clusters with the 102.,This almost sounds like a plan.,best to all.,

Just a note for Buckfield Mike. Your municipality is scheduled for a solar transit by the ISS on 3/2/2020 at 7:57 am in case the mood strikes you. The Moon is on the docket for an ISS transit on 3/11/2020 @ 9:47 pm.  Bulletin posted by the Cider House Observatory ISS Transit notification staff ( The Moose and Grey)

An earthquake was reported at 5:44 PM today centered in Sabattus. Magnitude 2.2, so not very big. Anyone feel it?

Yes that was my first quake. It was very short... My first thought was a  heating issue, The second was maybe an orgasm, but I was awake, so must have been a quake.

thin high clouds and haze right now but it's moving..    will try again in a bit.I think theres hope!

My first earthquake happened when I was thirteen. My younger brother and sister and I were camping in my grandmother's house, in the attic. The large wardrobe in the corner started shaking back and forth, I thought it was them, playing a prank. They asked if I was doing something to make the house shake.

Then my grandmother called up the stairs, asking what we were doing!

My parents called, to let us know we'd just had an earthquake.

Noticed one when I was a kid, probably early 60’s, spooked me, next one was I think 78, middle of the night, shook the house and everything was rattling.  That spooked me worse.  I count on the ground to be something solid!

Grey, the earth hasn’t moved for me over here yet....

sorry about the upside down pic if you see it that way... it’s the age old apple/ windows glitch they can’t seem to figure out.  Taken on my iPad..

Mike, I hope you , Dave and Scott don't mind, but I saved our last images ( after rotating yours) setting up a bit of a rogues gallery of the Princes of Maine,Kings of New England, Knights of the Realm and Jesters to the World kind of thing. That quake was really weak here, when I called on Norm Long his shop Gendrons' quarry was only a few feet away and his shop would really bounce around during quarry season. His shop also was across the street from a huge liquid propane depot so when things went bang it took nerves of steel to hold a spray gun steady.

As long as my mug doesn't end up on a post office wall I guess I'm ok with it.,

All in all a fine way to start the day.,the temp stayed around 30.,no gloves needed.,

I just got up from today's nap,.lol.,Miss Peg is lookin a little hungry.,pasta tonite.,with heart unfriendly meat sauce.,