Evolution 8 + Intel Compute Stick... I think I am in EAA Heaven

It has been raining here for weeks now and we have had maybe 2 clear nights in the past month. Given all that extra time I decided to take the plunge and work on a fully wireless Intel Compute Stick + Evolution 8 setup.

A brief break in the clouds tonight allowed for a first light. Happy to report it worked like a charm. To put it simply... it is the most portable, powerful, easy to use and elegant (completely wire free) EAA setup yet for my needs. It really does not get easier than this.

The setup for the evening was Evolution 8", StarSense and ASI290 Mono. The mount and the camera were both connected to the compute stick using a USB 2.0 hub (not powered). The compute stick was powered by a 5V/2A outlet on my Lithium Ion battery pack which was also powering the dew heater. I also plan to test out my Lodestar X2 with a filter wheel next.

I used Microsoft Remote Desktop for the Mac and iPad to remotely control the compute stick (screen shots attached). Which means (1) No wires - not even a single cable coming off the mount (see image). Zero risk of wire tangles (2) All I need is a tablet now for EAA even when stacking. I can sit on the couch or sit in the yard without having to lug a computer around. Or I can just sit in my study and use a my Mac to remotely control and stack.

Microsoft has released official Remote Desktop Apps for both Mac and iPad which offer a very seamless experience when using Remote Desktop to log on to a Windows PC. The compute stick required some minor software tweaks but after that worked like a charm. See below.

The compute stick was the basic model which retails for $150 - Quad core Atom with 2GB memory and 32GB flash drive. I added a 64GB MicroSD card. Based on my experience this spec is more than sufficient for EAA as well as Imaging. Even while view finding and stacking with ASI290 Mono, SharpCap and with Stellarium running in the background CPU utilization averaged ~50% and memory usage was about 1.3GB/2GB.

The Intel compute stick runs Windows 10 Home edition. I had no problems setting up all the Astro software and cameras. Encountered no compatibility issues with either ZWO or SX camera drivers or SharpCap/SLL. Also installed ASCOM platform and ASCOM drivers for the Evo mount. Worked seamlessly with Stellarium and StellariumScope.

The Intel Compute Stick did require some tweaking out of the box. First I let Windows update run and update the OS. It did a whole new installation of Win 10. I then had to delete the old OS folder which was taking up ~7GB. Once the update was complete I had to disable the Windows Update Service manually as there is no way to stop updates in Windows 10. This is very important as Windows 10 applies updates with complete disregard to time or workload. Given the resource constrained environment of the compute stick this could spell disaster for an evening's viewing should the update decide to start at an inopportune time.

Second I had to install RDPWrap (free open source SW) as Windows 10 Home does not include the Remote Desktop Server. Only Professional editions do. I did try other remote viewers like TeamViewer and various VNC apps but RDP proved to be the most resource efficient and reliable SW.

I also had to remove and/or disable a few other services/SW that come installed. A notable one is Intel Remote Keyboard which is a real resource hog.

After these optimizations the compute stick proved to be incredibly resource efficient and capable. It is amazing that I am able to run a full Windows 10 PC in just 10 watts of power. 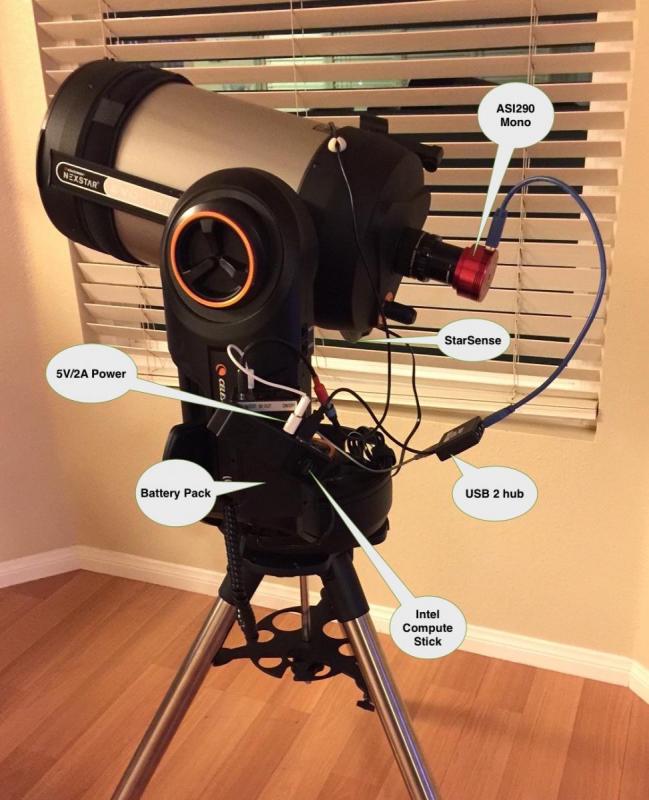 Here are screenshots from the Mac and the iPad. I am running Microsoft's official Remote Desktop Apps downloaded from the App Store on both devices.

RDP running on the Mac: 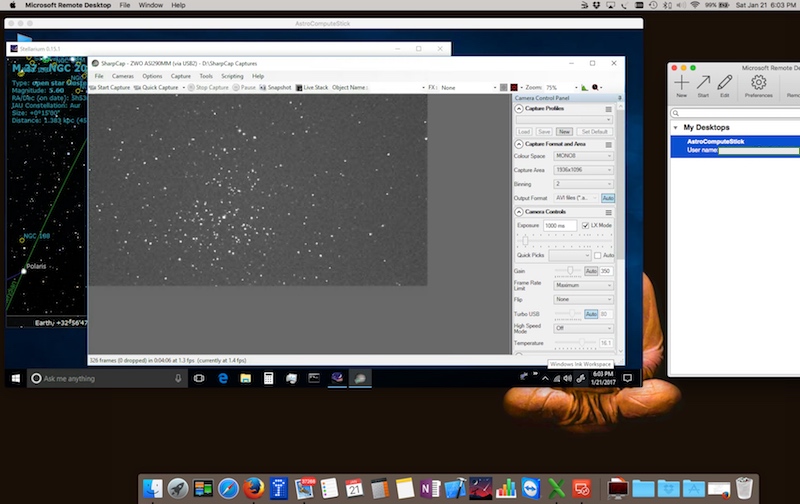 RDP running on my iPad Retina: 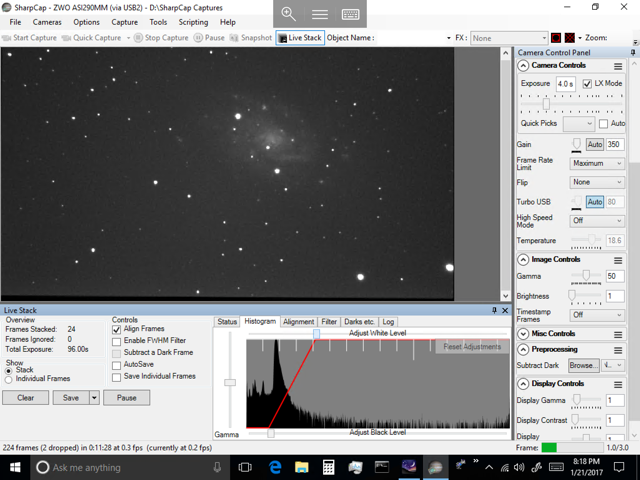 Very interesting. I think I might try to do this.

And I see there is a newer version of the Compute Stick available which has 2 USB ports, one of them is USB 3.

Mine is still on USB repeater, 30ft/10m. Had to do something similar as You, till today wanted use second laptop or small box computer.

Question:
How do You operate Starsense? Is there anything than Skysafari/Skyportal can run this gadget?

Wow, nicely done! I've been working in my gear as well, but there's no clear weather in sight. Ugh.

Nice. Might give it a go too. Then all i need is some decent weather.

I am using the newer 2016 version of the compute stick. The reason I am not using the 2nd USB 3 port is because there are known interference issues with the Wifi on the stick.

I will eventually deploy the Compute Stick for imaging on an EQ mount at which point I will also need to hook up an autogiuder and a filterwheel. Likely I will need a powered hub as unlikely the stick can drive all that in just 10w. But eitherways don't feel the need to use the USB 3.

I mostly do DSO but it would be useful for planetary imaging where you need max frame rate.

Does the 5v USB out on the mount not provide enough current to power the compute stick? It thought it was 2A?

Yes, good point. It does provide enough power but it also reduces runtime for the mount. For 2-3hr sessions it should be possible to power the stick completely from the mount. For longer observing sessions I would recommend using a seperate battery.

Since I am using a high capacity battery for the dew heater anyways I decided to plug it into that. Ensures I don't run out of power during a longer session.

I'm using a similar setup with an Evolution 8, $99 Kangaroo PC and an Atik Infinity. I use a portable battery to power the camera and keep the PC charged (it has an internal battery that does not last long at all driving the camera.) Once I have the scope aligned and focused, I control both the mount and camera from inside the house on cold nights, accessing the PC wirelessly using RDC for iPad. Very happy with this setup, though yours has even fewer wires!

You could also use something like a Microsoft Wireless Display Adapter to connect the computer to a large screen TV using WIFI direct.  The receiver has to be fairly close (within 25 feet).  But it would give a big wireless repeater display for your guests.

Very nice!   You've got me thinking ... and that may not be a good thing.  I've got too many projects going as it is.

May I ask what that white clip is on the top of your scope holding a wire in place?  Looks like they are better than what I use.

Very useful for organizing wires around the scope.

Thanks for the info.  I use reusable cable ties and cable tie mounts but the cable clips you use look to be more convenient.  I'll give them a try.

Assuming you have a 5GHz signal, have you tried running the WiFi on channel 36? That solved my USB 3.0 / WiFi connectivity issues as documented in the Compute Stick thread over in the B&II forum.

I did a similar setup for EAA which i documented here using my Evo mount and a WO Star71.

How far reach the WiFi signal?

Assuming you have a 5GHz signal, have you tried running the WiFi on channel 36? That solved my USB 3.0 / WiFi connectivity issues as documented in the Compute Stick thread over in the B&II forum.

I did a similar setup for EAA which i documented here using my Evo mount and a WO Star71.

Thanks. Your tip may come in handy if I decide to try planetary imaging with this setup. So far I am ok using USB 2.0 so haven't really had any issues.

How far reach the WiFi signal?

Depends on the router since you are in access point mode. You can also install range extenders if you face any issues.

Thanks this is great. Pulled out my unopened computeStick i got weeks ago. It runs sharpcap fine - tried a 224mc and a 290mm. Both good.

Installed RDPwrap as suggested above and off it goes. Now i can get rid of that pesky usb cable (from laptop to outside scope) that the dog likes to attack !!

one thing I'm not clear about (although I've done a lot of searching on this subject) - does Stellarium give you full control over an Evo with Starsense like SkySafari does?

Can you do Calibrate?

Can you add Alignment points?

Can you slew like you can with the HC/SkySafari, or only GoTos?

Can you control other odds and ends - like the Tray Light?

No it does not. You have to run a Starsense alignment using the hand control first and then connect with Stellarium to issue gotos.

Quick update. Had a great night last night with this setup. Ran for 3+ hours straight without issues. The compute stick is incredibly power efficient when powering the ASI290 mono, running SharpCap and live stacking. The 132WH battery that was powering the dew heater and the compute stick (in 40F cold) was still showed 70% capacity remaining after 3 hours.

I think this setup can easily run 7-8 hours straight with no additional power. Great for the field.

I'm using a similar setup with an Evolution 8, $99 Kangaroo PC and an Atik Infinity. I use a portable battery to power the camera and keep the PC charged (it has an internal battery that does not last long at all driving the camera.) Once I have the scope aligned and focused, I control both the mount and camera from inside the house on cold nights, accessing the PC wirelessly using RDC for iPad. Very happy with this setup, though yours has even fewer wires!

If you get a Raspberry Pi you can use ATIK Air with your infinity.

Excellent thread, Hiten! I wasn't really aware of the Compute Sticks, but after reading this thread and doing some web searches, I think this may be a good way for me to do remote EAA with my ASI224MC. Unfortunately, my current setup with a USB 2.0 over CAT extender will not work with the ASI224MC, and is solely an issue of the extender. I was kicking around the idea of moving to an extra expensive USB 3.0 over Fiber, but I believe this will work pretty well.

I went ahead and opted for the next level up CS325 Compute Stick with extra ram and processor power as I would like to run everything if possible via the stick and TheSkyX Pro as the mount control software which is a bit of a resource hog. I may end up having to do a hybrid setup with the Compute Stick just handling the capture software.

Fingers crossed this works well, there are some other ZWO USB 3.0 cameras that I am looking at that likely wouldn't work with my current remote setup.