Forecast was near right and sort of clear for a while and Venus was well defined. Even so a milky sky did not help the view with either the apodizer or the blue filters.  After the first sketch going to #29 allowed the apodizer but Venus was still way too bright so added the #85 (Amber) and found that about the right level with much of the sun-bright sky haze mitigated.

After the sketches I decided to try out a few filter stacking combos – nothing gained with the ones I tried at first.  Then decided to add the Baader Neodymium: this is a 2” filter and had to go on the nose of the Amici prism......or get crashed into with the stacked other filters.....!  I have tried the Neo in stacking before with fair results; but here with it was proving ideal to crisp up the view.

Seemed to me it was eliminating much of the effect of the contrast-killing bright haze with those blue filters; and in fact also enhanced the view with both those combos used for the sketches here - (and #29 without the #85).  Also the Neo on its own it rendered features markedly more apparent with just the right level of transparency that had been steadily reducing during the session – then cloud..........!

More investigation is planned next opportunity – pity I had not tried it earlier in the session today and got sketches. 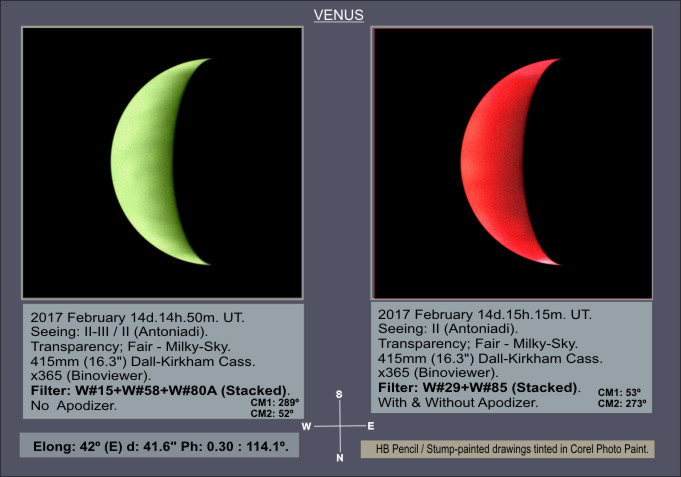 Wery nice Dave. You have a incredible talent. I really like the willingness to stack and try what works best for "you" instead of staying in the "box". Great job thanks and keep the coming if you can.......

Yes Allan: I like looking/thinking outside the box – and many opportunities for that in this great hobby;

as often say: I’m a suck it and see sort of guy. If I get a notion I’ll follow it through when/if I can – no harm

These sketches of Venus are very nice.

I was out examining Venus at midday yesterday.

The seeing was Antoniadi III but often worse.

I was trying different combinations of filters with a single polarizer rotated to give best contrast coupled to the Baader Neodymium working fairly well. I didn't get a view as nice as yours but it was worth the effort.

This is a good exercise you started here.

Good to hear of your filter experiences and interested to hear of any further results you might get.

I’d already made a mental note of trying the Baader Neo with stacking combos; but the milky sky

did not really encourage any experimentation at all along the lines I was thinking.  Then I thought

what the heck and the result I did not anticipate!

Subject to more investigation of course as seeing-vagaries can easily mislead......

Are you targeting any particular sections of the spectrum to observe in, or to block out with your stacking on Venus?

Not particularly either: simply curiosity at this point – evaluation later.  I’ve happily stuck with the #15+58 stacking for some years now (adding the 80A often) mainly because they consistently delivered detail in good conditions.  Now with a few new/untried filters I'm just seeking to see what other combos might deliver.

It was heartening to get that possible haze-cutting with the Neo; but as I say needs more investigation, as I can see other possibilities with planets in those sorts of contrast-reducing skies.  On the date reported here the blue filters were disappointing with the haze, and were dramatically improved adding the Neo.  Further trials might tell whether I had been fooled by some seeing issue or even sky-haze change.

Thanks for the informations

Thank you Dave for those interesting filter combo, it's the good period to try this with Venus.

Also, you push us to observe Venus.

Many Thanks Marios, Michel..........and for those Likes you guys

Had some longish clear spells this afternoon the gaps being deepish blue; sadly seeing was III-IV at best and certainly not suited to blue filter views – with Neodymium or not.

In fact I’ll strongly resist the desperation of doing a drawing of any planet in such seeing.  When the more contrasty features of such as Mars and Jupiter are compromised by such turbulence what chance with those of more extreme delicacy as mostly present on such as Venus and the outer giants.  In fact in IV-V I have seen more distinct *apparent* features/'shadows' on Venus than what very good seeing reveals........!!!

Those features that manifest in in a turbulent (IV/V) image are very likely to be what I call seeing-shadows.  The atmospheric cells can often be sharpened by racking in focus slightly to be seen as a racing stream across the planet – especially very bright Venus.  Often there is a standing-wave-like shadow effect which can fool us into thinking it was actually a real feature.  That rapid stream of cells often gives an effect mimicking the real diagonal banding on Venus and other spuriosity.

Thus I would never send the BAA, or anyone else for that matter, that sort of useless ‘chaff’ by doing sketches in such as Antoniadi IV.  Unless it was to illustrate those actual effects and the folly of believing and depicting them and passing them off as real.

It's different, but very well done IMHO. The detail is wonderful. Can you or have you done this with the other planets? Clear skies.

I have certainly used those stacking trials with other planets; but very bright Venus lends well to more investigation.  Not so much using the Baader Neodymium and the haze-cutting effect was totally unexpected.  Did nothing for Saturn the other morning and only enhanced the undesirable low altitude prismatic effects!

Skies are not cooperating for further looks at Venus and the elongation closing soon now.........

Your Venus sketches, well, actually all of your sketches, are simply amazing and show a great deal of passion and unparallelled know-how. I'm deeply impressed... once again...

Always interesting to read about your experiments.

And I'm with you about not sketching when the seeing is poor (all too often around here).  With experience, one learns when to hold 'em and when to fold 'em.

Even at the more basic end of this hobby so many side-roads and winding pathways to explore. Just one reason I’ve never tired of it; and indeed say that I found myself when I got into it..........

A chronic lack of clear skies here so far this year – and trying to do those investigations in a systematic way has been next to hopeless....

Thus I’m back down memory lane with more retrospective renderings etc. and (some) might seem worth posting if those skies continue failing to produce..........About 5 separate files/renderings partially completed currently in Corel Draw/Photo Paint – probably more coming as the inspiration arises and/if the clouds persist.........

Beautiful sketches! The use of the green and red filters is very attractive. Usually I use only blue and violet.

Yes the blue & violet filters – at least my 38A & 47B – are the most successful in bringing out Venusian features; that is when the seeing and transparency are good enough for shorter wavelength light.  But that stacking of #15+#58 delivers for me more consistently; often adding the #80A with good effect, but can find no use for that pale blue filter on its own – too broad-band IMHO.....

A lot of it with bigger scopes is getting the glare down to the right level – even in full daylight – and that is where the apodizer often comes in.  Tho’ apodizing is less effective when the sky is ‘milky bright’.   On the occasion reported here adding the Baader Neodymium with the blue filters seemed to cut the through the haze and even allowed the apodizer those and other combos.!

As I say more trials needed but not had the opportunity so far........! 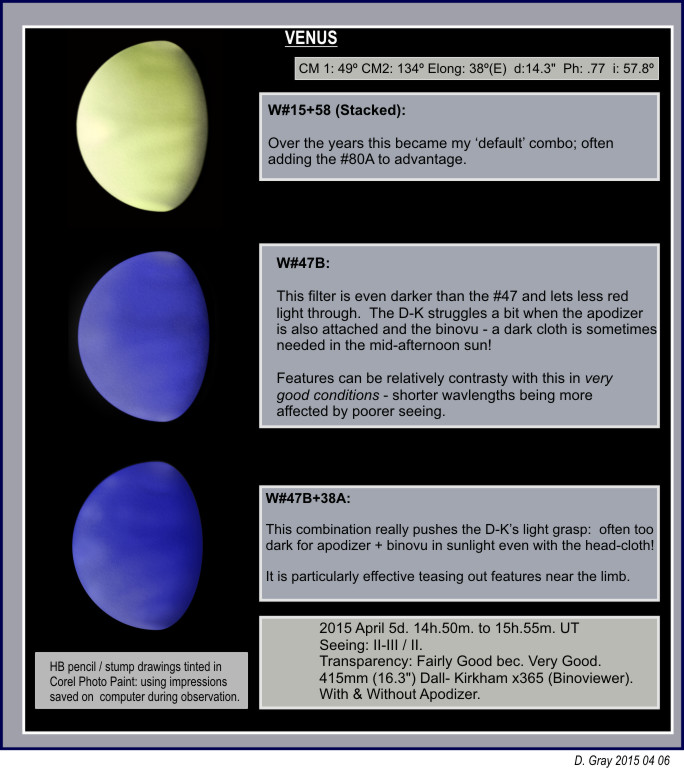 At last another chance to check out the Neodymium that I found to prove effective in cutting through the sun-bright haze of a milky sky; especially with blue filters. Initially a good deep blue sky with passing patches of lower cloud - the seeing tremulous then and putting that down to the sun not yet hidden behind the rooftop.  But as the sun went out of sight the seeing improved markedly but the haze/thin cloud manifested.

My steadiest view of the elongation so far: again putting the 2” Neo on the nose-end of the Amici got the same striking improvement with a very crisp crescent.  As there are prisms involved (the Amici & Binovu) I am coming to think that is where the Neo is having effect.......not allowing that light into the prisms, and possibly scattering back and forth.

Next opportunity I will try it the other end of the Amici to see if any difference – tho’ some clearance needed from those filters in the nose of the binovu.

The seeing was particularly good by the time I had gone to the blue-light view.  A distinct round light spot was noted on the n-preceding limb (about 8-clock position) that looked rather like a limb-transiting Jovian satellite at times. 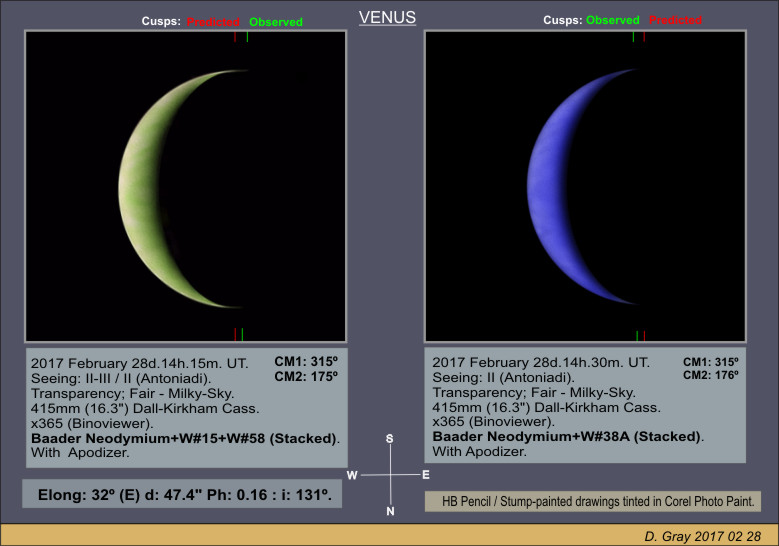 Jetstream forecast showed it meandering northwards toward us:  its weaker edge actually fringing over us.  A lot of passing cloud but soon caught Venus naked-eye and it looked steady enough. So I went for it: seeing was rather indeterminate with regard to seeing a crisp crescent albeit a jittery one.

Turned out it was no less jittery in the 3” – but, same as last session, once the sun had disappeared (rooftop) it settled, but only to Antoniadi III.

I had brought out a c.25-yr old gelatine type (Kodak) W#44A that looked in pretty good condition.  This filter was pretty popular with Venus observers pre-1990s but I’ve not ever caught sight of a glass version from suppliers.  First glance it might look like a #80A but as my Kodak book (1961) says it is light blue-green (much narrower transmission); whether it shows that tint on various screens – I don’t know.....! The Corel-tinting of the sketch was quick and simple: just applied cyan!

Shown on the attachment it is sandwiched and taped/sealed twixt two 3”x1” glass slides for holding over the EP – I made a special holder for it back when I used it regularly.  I must have done a better job in the construction as only this, the #35 (Deep Magenta) and #47B look intact. The darker inner shading/ring here, I guess, is a lo-res artefact - not on the original (9MB) one.  The others show some etching (fungal?); tho’ possibly the #44A has degraded invisibly as I thought the view a little soft through it.  Anyone attempting this needs to thoroughly sterilize the slides – seems not enough with some of mine..........!.

It was just possible to do one Neo trial; that was with the triple combo:  #15, #58, & #80A which showed some, little better than fleeting, detail.  The bolder dark and light features mid-crescent I seemed to glimpse with 44A also –BUT only after the combo view.  I had looked with that filter before the combo and saw just a blank crescent; bar terminator shading.... 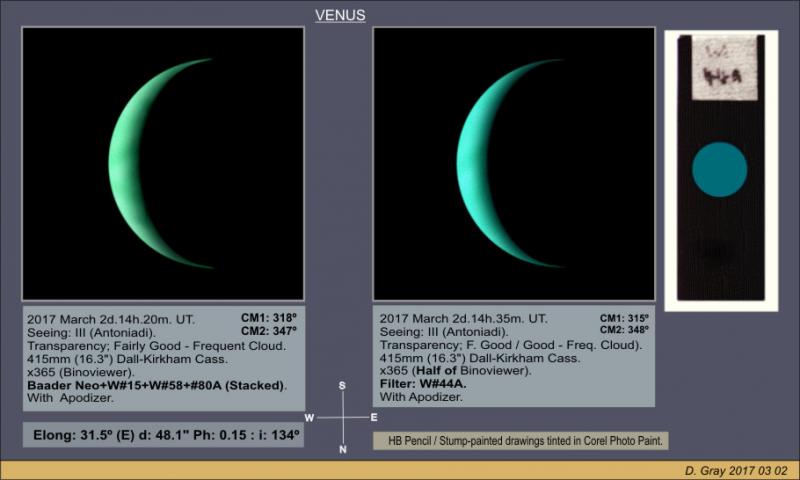