I was cleaning up my parts drawings and consolidated all my old worn drive discs.  It's a bigger collection than I realized. 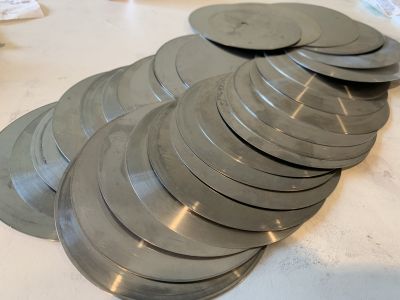 OK Ben, how many serviced Qs do they represent? There are about 9-12 per telescope, correct?

There are three per drive but sometimes the middle disc isn’t replaced because it’s never necessary and not always included in the set. So this is 10-15 drives or maybe 6-7 scopes.

Hi Ben - do you know if there is a way to re-connect the excentric brass fitting and the brass lever that puts tension on the RA knob (see pic).  I really can't tell how they were attached to one another (solder maybe?).

Solder I believe. Some epoxy should probably work. Factory replacement should be inexpensive too

I'm replacing the PowerGuide motor with an AC motor. Is the spur gear (and motor pinion gear) lubricated?. I think that I still have a can of instrument somewhere.

They are dry in my experience. Unlike a gear that has multitudes of revolutions per unit time and millions of cycles in a lifetime, the main gear gets maybe dozens of revolutions per year if used with unusual frequency. I am also reminded how surprised to learn early in my Mechanical Engineering coursework that normal gears have zero rubbing friction. They roll like a scrivener’s blotter.

My main observation is that systems that will be expected to operate for decades without intervention are often better dry because lubrication can fail and cause more problems than it solves. I’d say that lubrication of the prism shuttle and Barlow control are essential and that the focus train lubrications is also important. I can’t think of anywhere else that needs lubrication other than the main axles for RA and dec, pinions etc.

That makes sense. At 1/2 rpm and the light loading the geartrain will have, lubricant is not really necessary. Lubricant attracts dust and gets gummy after a few years. With the more common (and more precise) worm gear system, the action slides the gear teeth together and lubricant is necessary and frequently needs cleaning and relubing.
The mounting holes in the motor flange have been enlarged and I assume I'll need to set a backlash with the gears. I'll assume the spur gear is concentric with the axis and set the backlash close to zero, or very small. I'll see what it feels like before I remove the old "servo" motor.

I have two sets of 3.5 optics soon headed to Cumberland for reciting. If anyone wants to join it can help pricing to have a batch order.

I just need to remove a mirror from a Fast Focus II, which I haven’t done before.

The corrector was a bear because it was essentially glued in. But I had the recommended adhesive dissolver and was able to push it out without damage.

I also dismantled and partly refinished a 1964 standard today. That’s the other recoat set. Rather dirty on the exterior and mostly cleaned up with wet cloth. I think someone did a lot of eating when observing.

Before and after cleaning a grubby scope: 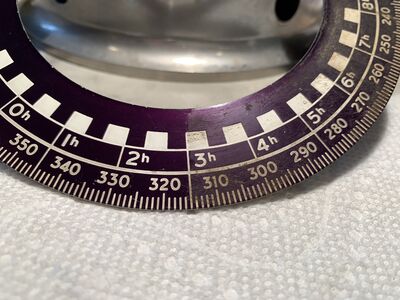 How to (carefully) remove a barrel from the base for access to the mirror. 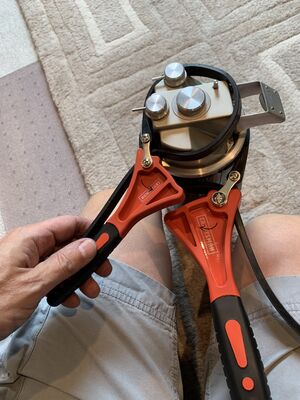 Are those photos of that distressed Questar that was listed on eBay here and here earlier this summer and that you reference in this post of yours from last month? Keep those photos coming (maybe start a new thread?) -- I absolutely love seeing the progress you make restoring those old Qs.

Yep, that's the one.  It was an odd sale with a friendly seller.  They took a long time after the close to ready their paypal, and having seen here worse optics problems I urged them to hold and we should resolve that before shipping.  I advised that they relist with the new photos, but they decided to sell to me for a discount that accounted for the the need for a recoat (which isn't badly needed, but still justified).

Here's more of the before pictures.  The rear of the corrector has some water-drop looking streaks in the coating, and the mirror has some little lines of sparkles.  Not pretty, but unlikely to much affect performance.  But once it's out might as well recoat.  It's like there was fluid in the tube that affected it, but I can't image.  The scope was dirty all over, and I'm not sure how the eyepiece will clean up.  The pinion for the dec drive had the tip broken off so that didn't move.  Nothing major, just clean and polish. 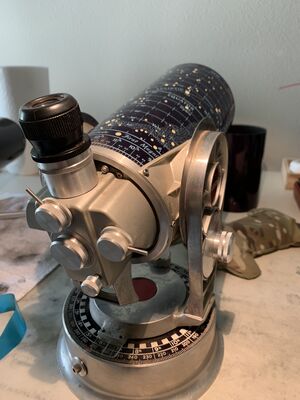 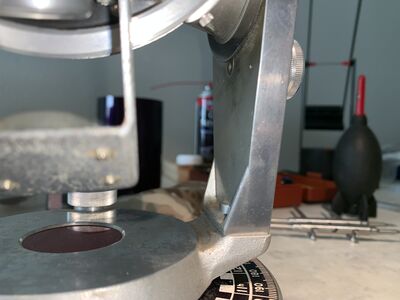 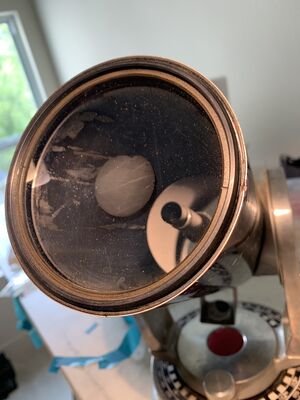 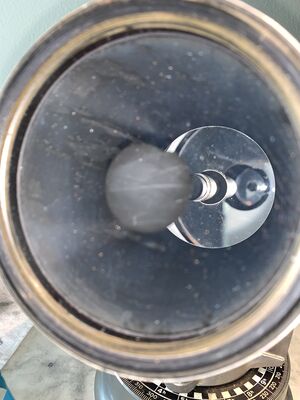 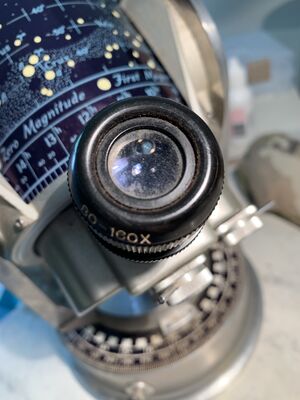 Seeing those pictures both mortifies me (I know I can be fussy about my optics and can get easily upset by so much as a fingerprint, but how on earth does someone let something like that go?) and makes me think that that scope is a wonderfully fun restoration opportunity. I think that, if I attempted my first Questar restoration project, I'd probably go for a scope in that condition. For sure, there would be no worries about messing up something that was already in bad shape.

Keep us all up to date on your progress!

"How to (carefully) remove a barrel from the base for access to the mirror."

And Sears doesn’t sell many telescope repair tools. Must make do.

Nothing wrong with that. A tool is a tool. Didn't remember seeing strap wrenches with that nice rubber strap.

I haven’t had to use strap wrenches yet but was successful in unscrewing a very stuck barrel after warming up the threaded area with a hair dryer.

I definitely will use heat and manual torque before getting out the strap wrenches.

I also have a fixture that bolts to the naked back plate with prism removed and clamps to the bench so that I don’t need to wrench the control box. But the illustrated method was handy if potentially risky.

Cumberland confirms that they will soon (weeks not months away) be doing a Questar run, and they will be including some re-coats for me in that batch to save my costs.  Anyone interested in joining in is welcome and I'm happy to help coordinate.

Sorry I don't have exact pricing.

Cumberland kindly offered me the choice on a 1964 set I sent in for recoating either to recoat to modern standards, or alternatively for a more historically-correct condition, to leave the front surface uncoated as they advised was the norm back then because the factory was concerned about coating degradation due to owners cleaning the front surface too much.

I picked the modern approach, and would think that's the easy choice unless perhaps restoring a 1954-55 model.

Cost for two sets (one without mirror) was $500 total.

Cumberland kindly offered me the choice on a 1964 set I sent in for recoating either to recoat to modern standards, or alternatively for a more historically-correct condition, to leave the front surface uncoated as they advised was the norm back then because the factory was concerned about coating degradation due to owners cleaning the front surface too much.

I picked the modern approach, and would think that's the easy choice unless perhaps restoring a 1954-55 model.

Cost for two sets (one without mirror) was $500 total.

Great info on multiple counts - thanks for sharing! This raises the question of when Questar/Cumberland began coating the front surface of the corrector.

I would also imagine that the cost for recoating differs from time to time. $500 seems low for that amount of work.

This was a good price because it holds until a Questar new production. It’s not atypical but it’s not guaranteed so get a quote before assuming. It could be several times more if it’s one order.

Alas, the mirror of the 1964 set had a bad chip on the back that turned into a crack on the front, and the set has been deemed unusable.

I may transplant from one I have or keep an eye out.

The levers that tighten the different nuts at the collar for the riser and head have a nice feature in that the handle can be with drawn and reoriented.  This can get the lever out of the way of other motions.

But these can get so gummed up that you might not even realize they are mobile.  Here's how to loosen them up: