Equal aperture? What about equal effective aperture. The Newtonian has a central obstruction that the refractor does not.

True, but that % can be adjusted.  Achromats have CA that varies with focal ratio.  My point was for all the really extreme comparisons posted here & elsewhere.

How about my RV-6 vs. my Edmund 4" F15?  Is that reasonable?  If so, in most sessions, the refractor delivers better high contrast views of the planets at the same magnifications.  BUT, the 6" Mak can best the Edmund 4 -- and it has a much larger C/O than the RV-6, since I made the over-sized secondary baffle.

I call that one the Lost In Space edition Tom. Danger Will Robinson, danger!

Got this older version Voyager for 10 bucks from a garage sale some years back. The original tripod and tripod head was missing but the declination fork was present attached to the cradle  Modified the cradle to attach to an ebay (scopehead) EQ1 and put it all on a neat folding tripod I got from Apogee long ago. The 60mm F8 has very sharp optics. Has a unique finder mount that adjusts by turning 2 rotary eccentric rings built into the bracket. Very heavy duty construction of the OTA and no plastic 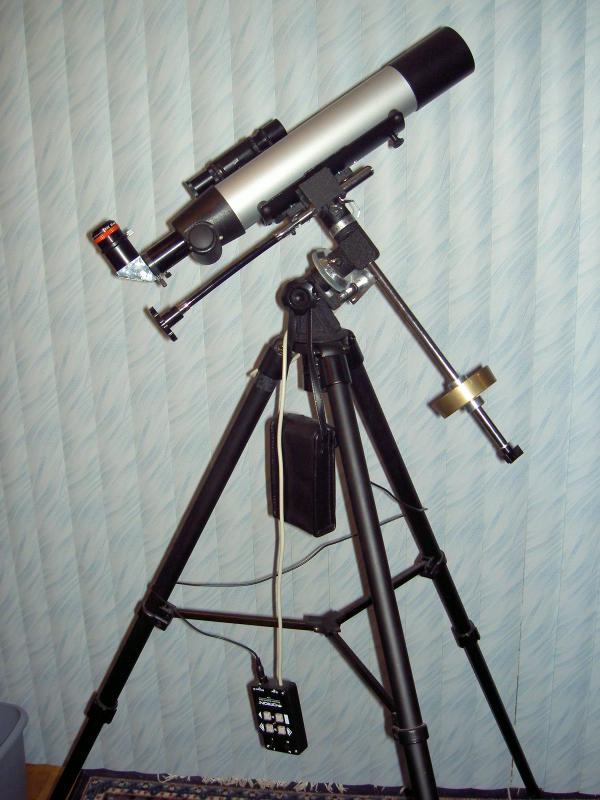 There was a lens-less gray & black Voyager OTA on eBay recently.  I don't recall seeing many of these back in the day.

I thought these Moire' patterns in the Edmund catalog were pretty cool.

A slightly dizziness effect, complementary to the boogie woogie music of the time.

But you got to see them in real life. 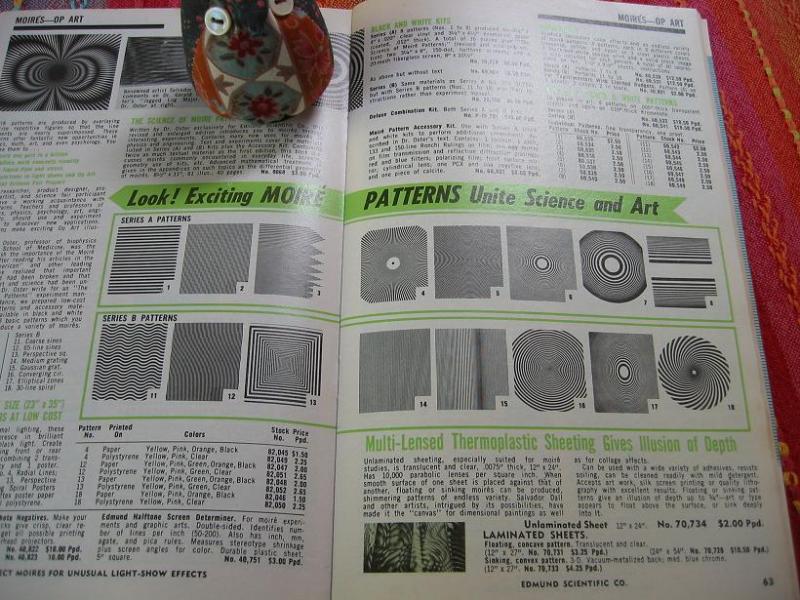 just to be clear, I wasn't trying to re-kindle the reflector VS refractor debate. I was just comparing the Astroscan and the Voayger because I owned both and used them in a side by side comparison. The Voyager was originally intended to replace the Astroscan in the "beginner" market. Regardless of the telescope design a test of the scopes ease of use, eyepiece view, and overall function proved the Astroscan to have the edge.

Granted I have a natural prejudice towards the Astroscan, but the 6001 had some blatant shortcomings.

1. The mount couldn't point to zenith!

vs. the ball & socket alt-Az mount on the Astroscan which is about the easiest thing to use in all astronomy

2. The traditional refractor finder on the Voyager was hard to use.

vs. the fool proof iron site on the Astroscan

3. The narrow FOV on the 6001 combined with its unfriendly mount made it hard to locate and track objects...

vs. the 3 degree FOV of the rich field Astroscan

4. Finally (and most obviously) the 102mm objective produced brighter images than the 63mm refractor.

If you were recommending a scope for a friend starting out which would you choose?

The Astroscan was produced for over thirty years! I say the proof is in the puddin

But the 6001 was a great little scope. When I compared the Voyager to my Tasco 99vr, the Edmund would blow its doors off every time. Tack sharp! Like an ED scope of today. 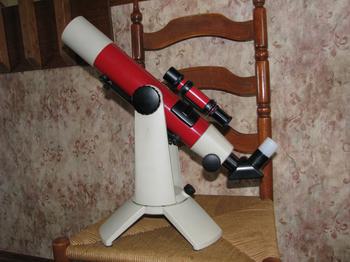 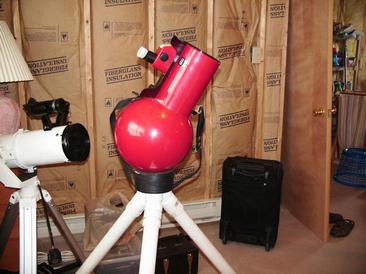 "Incidentally, do you remember that they offered the 6" fork mount version with an f5 focal ratio, along with the more common f6, in their catalog for a couple of years in the late 70's or very early '80's? I do not recall the part number of that particular combination."

There's even more than that. There was a 6" F4 also. There were a lot of combinations, and an unfortunate re-use of a model number for two different scopes. Here it goes, hang on:

Don't ask me where I get this stuff from, it's all over hade's half acre. I'll can guarantee you it's accurate.

Lots of avatar changes ROLO. Going for self portrait now?

Interesting document. From the dates it must be for the new lens Edmund would be making in house

soon in their own plant, and no longer relying on imported lenses for the 4 inch and 3 inch f/15's.

You wouldn't happen to know where the lenses came from for the 3 and 4 inch refractors would you?

is the million dollar question.

I'm sure probably only a few personnel at Edmund would know the answer to that question, a company

secret that would not be allowed outside the company.

I contacted Edmund a while back, and was told the records for the original 3" & 4" F15 refractors weren't available; and, she couldn't find anyone at Edmund who knew the maker of the imported Japanese lenses.  Then, she said "Keep asking questions and we'll put you on our Watch List."  [just kidding!]

I'm inserting this hotlink to another Edmund thread.  Many good Edmund topics here as well. The last project is very interesting!

The 3001 base may be "absurd", but it's a solid as a rock and never fails to elicit a grin every time I look at mine. 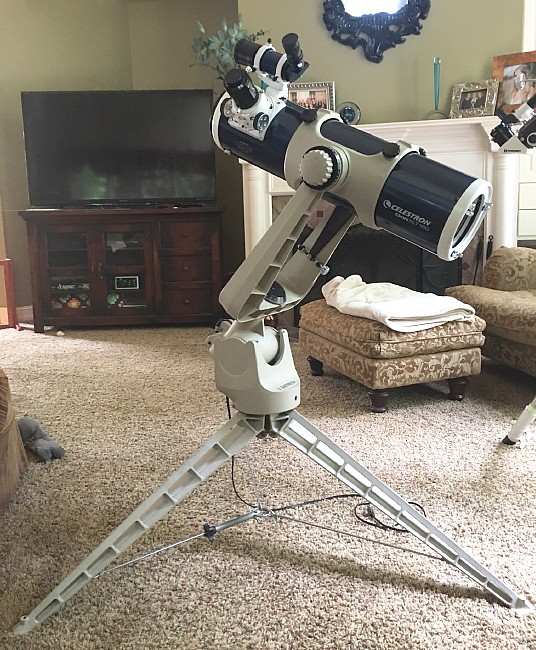 I think it looks great! Although I can imagine breaking my neck tripping over those tripod legs on some dark night.

My first two "real" telescopes were the 3" f/10 Deep Sky Explorer (when I was 11, with the angle alt-az that simulated equatorial; which of course I did not know how to use and so picked up and turned the telescope for each next object! $29.95!!) and then the 4-1/4" Palomar Jr with a REAL equatorial mount - that I still picked up and turned until I finally realized there had to be a better way (when I was probably 14 or so). Bothe were very serviceable scopes. I found about 30 M objects with the 4.25" by polar sweeping with declination adjustments and by counting fields (painstakingly!!) Mowed lawns for a whole summer to save money to buy a clock drive for it. THEN I built a 2" f/15 astrocamera (using a  flea market $1 box camera and 120 film that I removed the len and reconfigured to live at the prime focus) and added it to the the scope and took guided pix...that I developed (B&W of course) in the darkroom, which really was the garage to our house. Memories... I loved my 3". It had a 1/2" Ramsden EP for 60X and an adjustable Barlow lens (the lens slid up and down inside the tube via two retaining rings) and could get as high as 180X. Tiny 30mm (4X maybe?) finder.

I think I've posted this story before, so ignore this if you're already familiar with it.

I was staying the weekend with my best friend in fourth grade, about 1967.  I was about nine years old.  While at his house on a Saturday afternoon, we found ourselves poking around in a basement storage room at his house.  There I saw what to me then was a HUGE telescope.  I had already completed the Messier list with the Tasco 60mm refractors and 3" reflectors that Santa had brought me previously, and I asked my friend about the scope.

I begged him to let me take it out.  He asked his mom who agreed to let us take it out in the backyard that night.  I examined it and found that it was simply out of collimation.  I did the best I could visually, not having any alignment tools at my disposal, but got everything reasonably centered.

That night, he, I, and his entire family were treated to views of Jupiter and it's moons, the Moon itself, and a few of the brighter Messier objects.  They were astounded that I got the telescope to work at all, and the views just blew them away, especially Jupiter.

That telescope was an Edmund 4.25" Palomar Jr., on wooden tripod.

A few years later, my friend's family moved away when his father was transferred back to Texas, where they originally came from.  I was astounded that they gave me the telescope, rather than haul it back to Texas.

I still have the main tube and mirror, having slowly upgraded the scope over my jr. high years to a pedestal mount.

But that was my first "real" telescope and I'll never forget the many nights I spent in my dad's backyard as a kid, teasing-out objects from the suburban skies in the back alley.

Thanks, Edmund. And thanks to my friend and his parents.

The 6-inch Edmund Newtonian was the greatest.  Maybe still!

I got mine 2nd-hand in 1966, after owning a string of 2.4-inch Japanese refractors (very serviceable little 'scopes, and very educational).

But what I could see and do with the 6-inch Edmund was what made me a professional Astronomer, some years afterward (if not immediately).

I still have this Edmund 'scope, and its eyepieces, mount, etc.  The mirrors could use yet another aluminization.

As importantly have been the 'scopes I made by hand, including all the reflecting optics, since 1965.  Largest only has been a 10-inch f/4.0.  First object I saw with it after the primary came back from Denton Vacuum in Cherry Hill New Jersey with its first aluminization (I'd silvered it myself, earlier, using Brashear's process), was Comet Kohoutek.  The comet looked very green!  But of course not as bright as the predictions by some optimistic folk.  We rue this "over-prediction" of brightness to this date, made worse by SKY AND TELESCOPE popularizing the rumor.  Dr. Kohoutek is not to blame.

Joe, I have two Edmund 6" Newtonians, awaiting restoration.  Both have the factory clock-drive.  Retirement projects.

I wonder why I very seldom hear about the Edmund 4" f12 refractor. Most times I see the f15 being talked about. Is that a better scope or just more popular. My scope has a 4" f12 lens I also have a set of original RKE eyepices I bought with the lens in 1979.

I'm not sure the F12 was ever marketed as a complete scope?

I wonder why I very seldom hear about the Edmund 4" f12 refractor. Most times I see the f15 being talked about. Is that a better scope or just more popular. My scope has a 4" f12 lens I also have a set of original RKE eyepices I bought with the lens in 1979.

probably order anything you wanted.

Around this time Edmund listed a new 3 inch telescope and lens, a f/11, as well

Hi Robert; I am almost positive the 4" was only available in the F/15 f/ratio. Robert Edmund did around the time of the red tube series try to expand the telescope line with reflectors up to 12.5" at f/6. The fork mount was made by AstroWorks in AZ if not mistaken or when I looked at the 10" f/6 and the 12.5" f/6 on the retail store showroom floor then that fork mount was an exact duplicate. These were some massive heavy duty scopes which were strictly for observatories and thus they didn't catch on.