Managed to acquire this sample from a collector. Of all the 8" compound telescopes, this sample yields the highest contrast I've seen among just a few others. The corrector has no coatings but the figure is extremely smooth. It would stand up to any cass costing several thousand dollars. Without vibration pads, the scope dampens in about 3 seconds but with the vibration pads, it literally dampens in half a second and remains rock solid. I got an AC to DC converter and it works perfect in the field. No bells, no whistles, just straight analog and all American.  Amazing!

Beautiful! Bought mine in '77, and still absolutely love it.

Great looking old scope! Does it have the original star diagonal where the eyepieces are a snug fit?

That mid 70s $800 C-8 would cost around $3,300 in today’s dollars. So to the people who bought it back then it was like buying a multi-thousand dollar telescope today.

I have a '73, it's so good! I added a 2" prism back, I love the whole package!
The crutches tripod is great at dapening vibration as you say.

Mine is from very late production of the orange tube C8s. It is one of my favorite visual scopes. Very comfortable and easy to use with great optics.

My C8 with its smaller and older sibling... 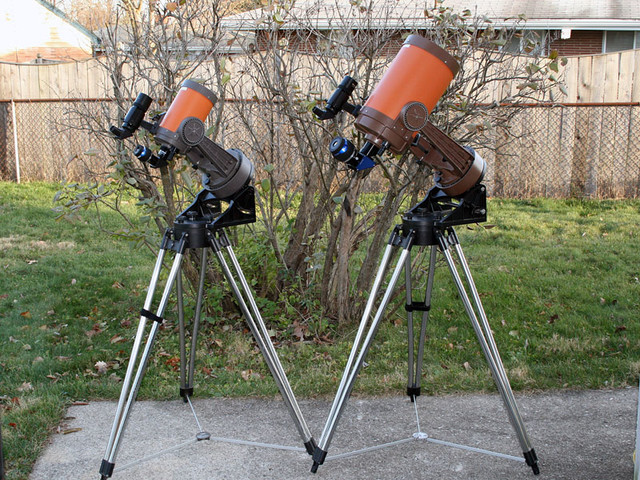 Mmmm... brings back memories of many happy nights out under dark skies when I was young. Consider yourself lucky if you have a good one, mine was distinctly below par optically.

I'll do a side by side with my friend Pete who has a modern coated C8 as soon as possible. In my opinion though, I'd be more concerned about optical quality. One thing my friend Steve mentioned which I've mentioned in the past is that an observers perceived contrast may be increased because the background may appear darker because there's less light coming in. But I wouldn't get too wrapped up in all this. The images are very bright! For example in this review the coatings appeared to make a difference, but the winner in this comparison had the coatings which were less enhanced. https://www.cloudyni...y_scopes_1.pdf

Think about it another way. If light isn't concentrated where it's supposed to go, then there's light loss that way as well, so I wouldn't take coatings too literally in this particular case. Even with modern apos, there's so much hype about FPL-53 glass. Whenever observers obsess over this, it's a red flag in my experience because they're more obsessed about glass and almost completely oblivious to figure. My friend Darren has used about three dozen different SCT's, maybe more and no matter how many times I test them, I've just never been that excited. I've never seen one that's very special. This old telescope here is special in my opinion because I've used and tested many great telescopes in world class conditions and this stands up.

In my mind, I'm always thinking about the best images I've ever seen and those are the images I'm always comparing. In my opinion, this is probably the finest 8" sample I've ever seen. It's really that good and several observing buddies of mine were flabbergasted, myself included. One of my friends had a 7" F15 Zen Mak Cass set up near he and I both agreed this C8 delivered finer image contrast. We even had a SkyWatcher 150 Esprit and it was standing up with that as well on Jupiter. Wonderful colors and surface detail were visible at various magnifications. There was also an 11" SCT next to  us as well and that wasn't holding up as good an image as this C8 was on Jupiter. That's an example of extra light gathering but the contrast just wasn't there.  To me, it's a testament to the integrity of the instrument. Although I've never been a fan of SCT's because of previous experiences with them, I still whole heartidly believe that most common optical designs, if made properly, have the potential to deliver world class images.

Nice scope Joe. You mentioned a sand cast 8" Celestron scope several years ago that had great optics. If this is the same scope you must really like it to have kept it for so long!

Sounds like you found a rare beast! I owned a few of these back in the day and observed through many more. Never had the experience to use one like you discribed, best I saw was probably around 1/4 wave. And as far as coatings, I agree that sometimes high transmission/reflective coatings in 8" and larger scopes increase scatter and decrease contrast on Jupiter.

Different shot. This tripod was my favorite as well. Ultra light yet rigid.

I always thought that the tripod was ingenious; very lightweight and very sturdy. A bit tall for use while seated, but a Starbound chair fixed that.

Nice scope Joe. You mentioned a sand cast 8" Celestron scope several years ago that had great optics. If this is the same scope you must really like it to have kept it for so long!

I'm assuming this is the "special" SCT that you alluded to in a thread some time ago.  I would have never guessed it was a classic orange tube.  You threw that out there and I was wondering if you were going to write something about it.  So do you think it was luck of the draw or does it have some special lineage (hand picked for so and so).  What are you planning to do with it?

Not hand picked, most C8'S from that era were Ex performers.

I moved the OTA to a Ultima mount for more stability and it's also now  not dependent on AC.

Scope will most likely not be sold until my passing on.

I love my 1975 C8! The optics are very sharp. Probably the best views of Jupiter, Saturn, and Mars that I have experienced have been with this scope.  It's consistently good on just about everything. I recently obtained the correct period wedge with the Celestron logo in the metal. Now it's complete!

I'll never part with this 1972 model. It may be the best of dozens I've tested. The interesting thing about this one is the clear water white glass corrector instead of the soda lime green glass.

Wow, that one has seen some days, or rather nights...

I'll never part with this 1972 model. It may be the best of dozens I've tested. The interesting thing about this one is the clear water white glass corrector instead of the soda lime green glass.

Rolo, is there any easy way to tell if the corrector is water white glass? The corrector on mine looks colorless, but that's probably because there's no coatings. It's a great performer either way.

They were are still are great telescopes!

Theoretically, the throughput on a newer Starbright coated C8 would be roughly 1.25x that of a completely uncoated C8.  That assumes 96% transmission at each air-to-glass refractive surface vs 99% for coated, and 87% reflectance for each uncoated aluminum surface vs. 94% for enhanced aluminum.  The older C8 might actually be a bit worse than those numbers suggest since the mirror coatings have likely degraded a bit since the 1970's--even in a closed tube.  I'd guesstimate 1.3x the total throughput in a new C8.

That being said, a 30% difference in light grasp while easily detectable is not enough for one to say, "Wow, that's much brighter/dimmer!".  Basically, for brightness alone it would behave about the same as a 7" modern SCT if such an animal existed.  Obviously, the resolution would be the same on an older vs. a modern C8--coatings don't make a difference in that area.

If it has a really good optical figure and reasonable levels of focus shift (something that, if memory serves, the older C8's were more prone to than the modern ones), the coatings don't make that big a difference in performance.  They matter, but 25% or 30% difference in light grasp would not be enough for me to want to change from a known good telescope.