Around 10-12 years ago, flush with excitement over my recent acquisition of the Goto 204 4" refractor I found another Goto on Astromart.  Thought it looked neat and bought it.  The seller wasn't excited about selling it because of the poor condition of the case (one side shattered) and a number of mechanical issues.  He relented in the end and I then had one of those pendulum weight mounts and a 60mm telescope that I knew nothing about except it was another Goto.  Went on the shelf.  Life intervened.

This year I got out here on CN and started learning about some of these 'shelf' scopes.  Met Dave Trott.  Made a commitment to trim the shelves of many of them.  That Goto I knew needed skills beyond mine and Dave wanted to mess with it.  Happily sent it his way.  It didn't fit those nice grey enameled scopes that I was learning more about anyway.

Then I got an email and must admit with all the information gathered here I jumped in once more.  Am very glad I did and that Bob Myler consented to part with this Zeus marketed Goto Eros.  Haven't seen any pictures of this model, even in the Goto book where it falls into the post war transition period in my opinion (the price sheets from 1938 and 1945 do not list it), and it's mount is a convertible Alt-Az and EQ.  The Eros that is presented in the book is mounted on a more traditional EQ mount and given a model number 202 in the later 50's price sheets.

This scope did have some issues - case was warped a bit, wooden parts there but broken free, missing the erector lens assembly and T30-AH40 eyepiece, dew shield frozen, lens cell frozen, some mold to deal with, latitude adjustment locked tight, azimuth ball locking nut frozen - but it looked really good in the case (after spending about three hours removing the superbly executed packing materials that Bob had used to protect the scope).

It also had some great documentation and with galakuma's assistance I was able to determine that this indeed was an Eros.

So with many of those issues resolved, here is my Goto (Zeus) Eros 2nd time around. 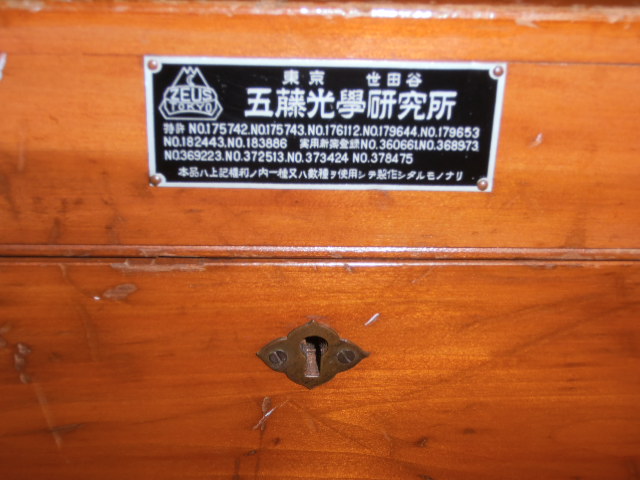 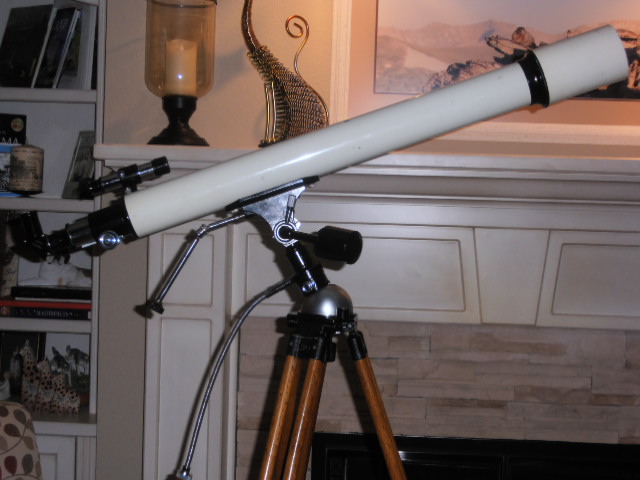 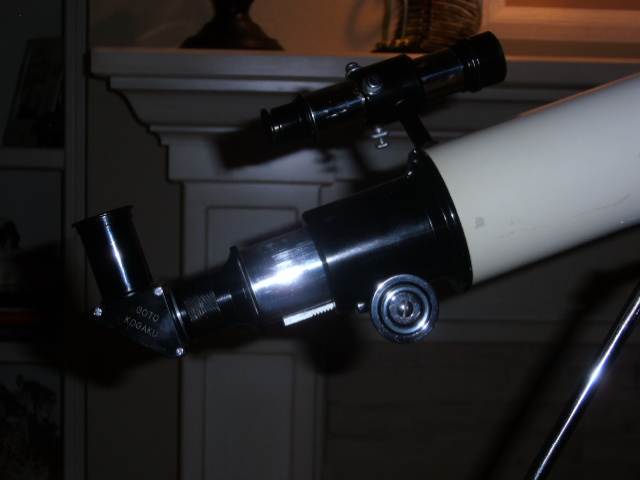 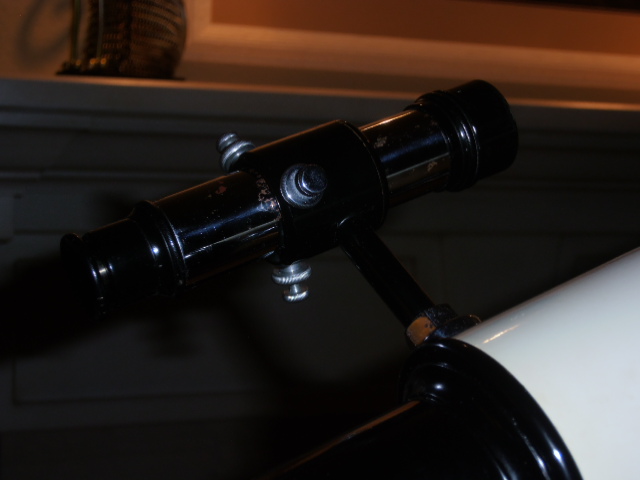 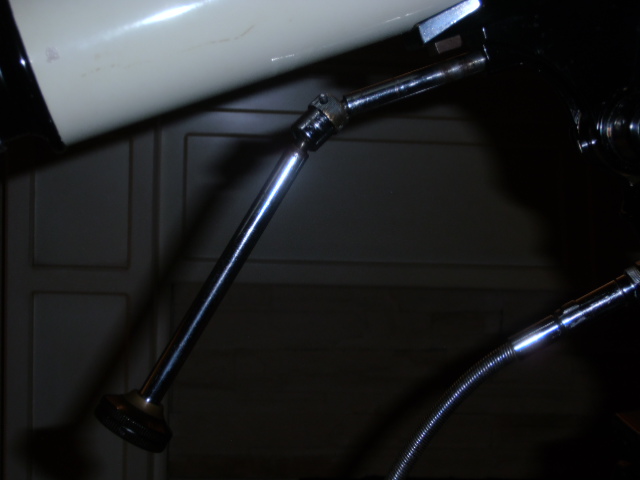 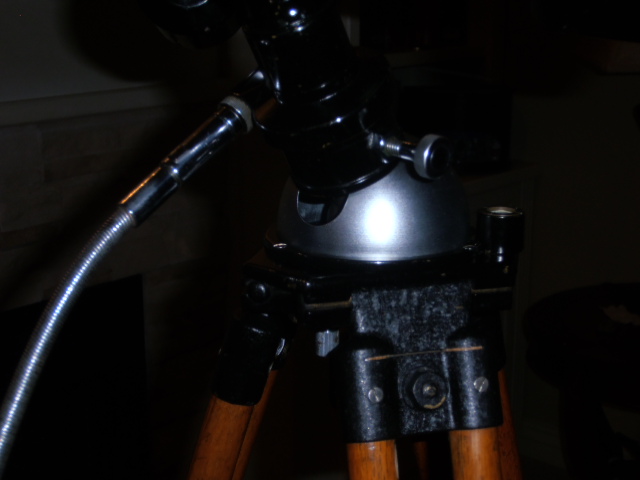 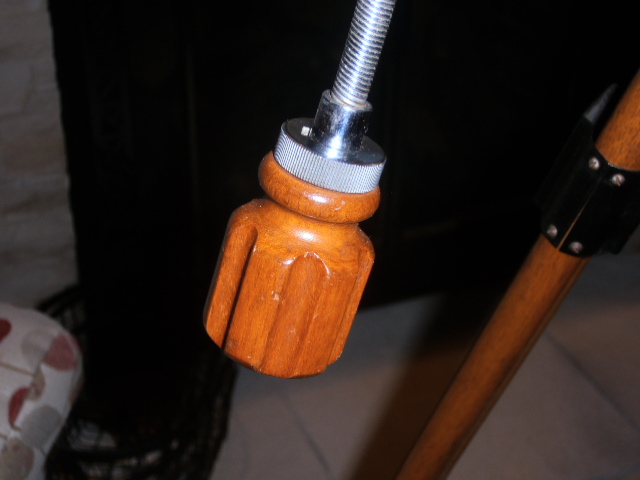 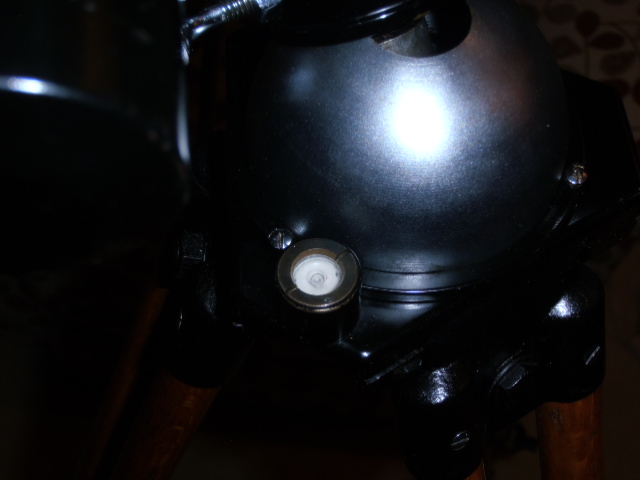 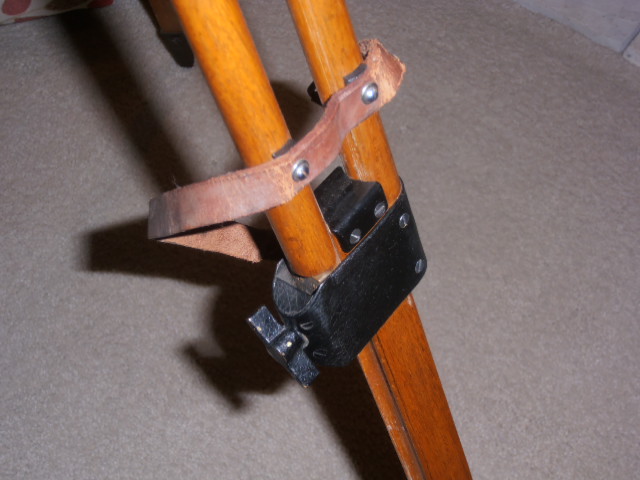 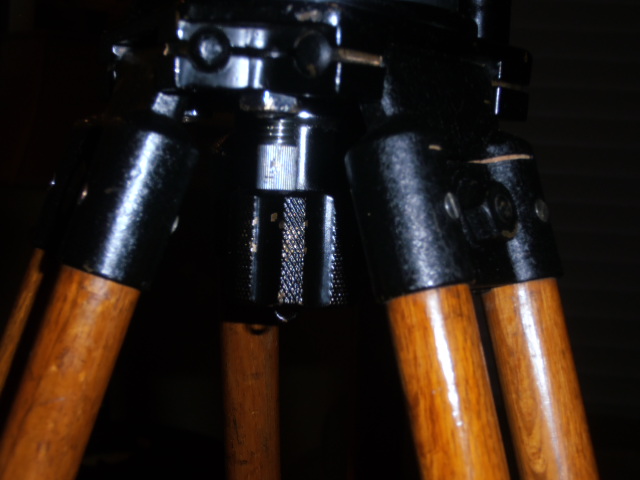 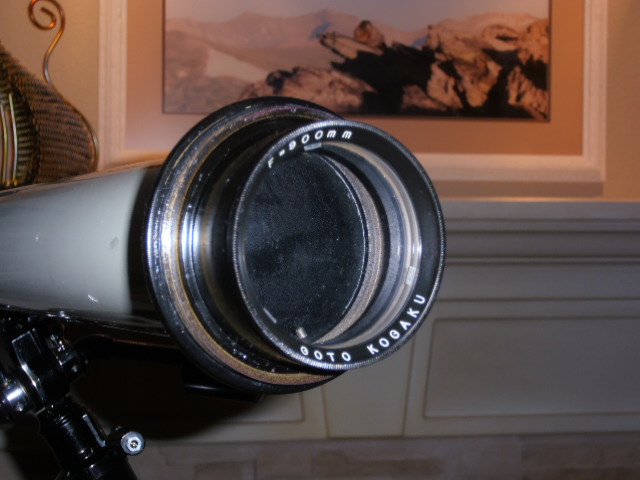 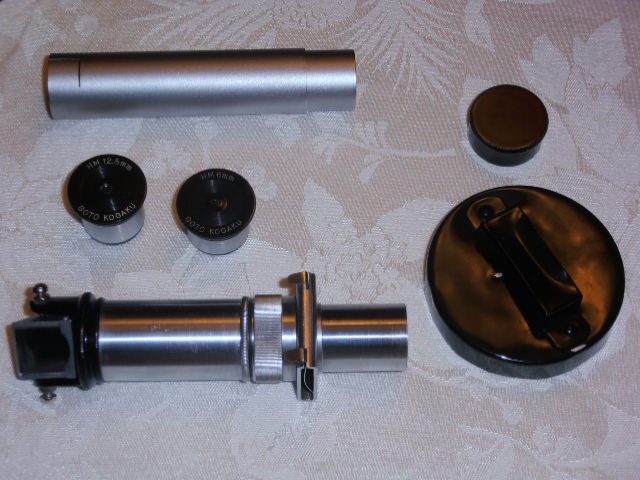 The wood knob alone is to die for!  That tripod has Zeiss written all over it.  And the overall condition is incredibly good!

Amazing, Stew, thanks for sharing these remarkable instruments with us.!

Chuck, the wood knob is absolutely original and on the blueprint that accompanied the scope.  It was one of the swaying points that convinced me to take on the effort of working on this one.

I would have bought it just for that knob too!

A beautiful piece of functional art. Congrats and enjoy!

Indeed, it is not the same as the U-joint on later Goto scopes, typically on the RA slow-motion..

That is an amazing piece. I would imagine the use of wood on the knobs indicates a very early post-War date.

That is an amazing piece. I would imagine the use of wood on the knobs indicates a very early post-War date.

Yes, I agree.  This is not at all like the Goto version of the scope that I moved on to Dave Trott.  We will be comparing them.

The blueprint that accompanied this scope is dated May of 1951.  Dave's Eros is dated 1946 if the gent that sold it to me had that information correct.  This further supports my belief that Shinko-sha marketed the Goto line with perhaps whatever parts it had remaining post war for some time along side Goto's marketing efforts.  So again, scopes generally the same can be Zeus or Goto, and parts used, like the wooden knob might be different.

Another CN'r sent me a picture of one of these with the 58mm Uranus OTA so again, a variation possibly due to leftover parts at end of WWII.

awesome scope.  Love the build.     Of course scopes like that are worth way more compared to the average scope that came out of Japan.

I agree they are true antiques.  I would love to have some scopes like that.   Just not your average run of the mill scope.  That is what I like to collect now.

Here is galakuma's tranlation of the titled area of the blueprint (the bold IOZ after the first quotation mark is Eros):

I can't imagine them producing anything other than pure military optics during the war as stretched as Japanese manufacturing was then once we began strategic bombing.

I can't imagine them producing anything other than pure military optics during the war as stretched as Japanese manufacturing was then once we began strategic bombing.

Kids still had to go to school during the war, and I'm sure it was coming together in someone's head while the war was still on.  Japan's defeat was assured long before the surrender and a lot of savvy businessmen knew it.

Minor point, not worth hashing-out.

WWII began for Japan in 1937.  It was the third Sino-Japanese conflict in Goto-san's lifetime.  He was following both patriotic duty and business opportunities in an industry shifting to wartime footing when he went public with Goto Optical in 1938.  The '38 price list was the last till '45.  Shinko-sha had no Goto products in its Kagaku-Gahu magazine in 1941 or 1942.  The public company was merged with the Tokyo Clock Company and the technical staff transferred to Fuji Film in 1942.  Goto-san did privately acquire the factory in the suburbs of Tokyo in 1942, so he was planning for post war activity, but he was heavily involved in a number of optics related projects and research in support of the war effort during the war.

Yes, instead of the wound wire springy short segment on some Dec slo mo controls, this has the added complexity of a pinned ball in socket.  Used to eliminate vibration of the rod on a springy stalk?  Only bends so far, not like the u-joint which hangs straight down.

Beautiful, rare, Classic, & Goto -- what more could you ask for?  Love it!

Here is my version of the same scope. The scope is posed in altaz mode without the weights and equatorial with the counterweights. It is the strangest mount I have ever seen! This one in particular requires a video to demonstrate the extremely odd operation of the mount. Video coming soon. 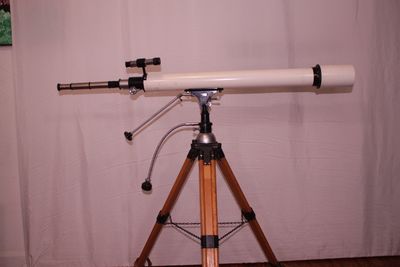 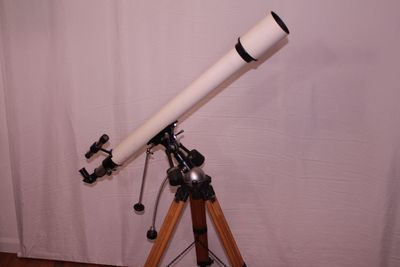 If you are interested in the operation and idiosyncrasies of this strange telescope mount you may want to watch my video at https://youtu.be/zFNkRna3zBwe .

Dave, does the mount cause any "blind spots" in the sky?  Have to run now but will check out your video in the next day or two.  Nice scope!

Dave, does the mount cause any "blind spots" in the sky?  Have to run now but will check out your video in the next day or two.  Nice scope!

Great question, Chuck. The mount can become very challenging when near the zenith in altaz mode or near the pole when in equatorial mode. Your head may need to occupy the same physical location as the tripod head or one of the legs. Lots of fun!

Dave did a great job on the video showing you how the mount works.  I thought it would be fun to show you the latitude adjustment mechanism a little more closely (and because I needed to find out why it didn't work on my Eros like the smoothly operating mechanism on Dave's).  There is a knurled ring nut that acts as a stop on the worm.  Mine was out of position by an inch or so and it was frozen at that spot.  Most likely because its set screw damaged the thread of the worm.  Without that free and properly set at the back of the scope bracket the worm was simply spinning.  The pivot carrier assembly had nothing to play against as the worm moved in and out.  So it all had to come apart. 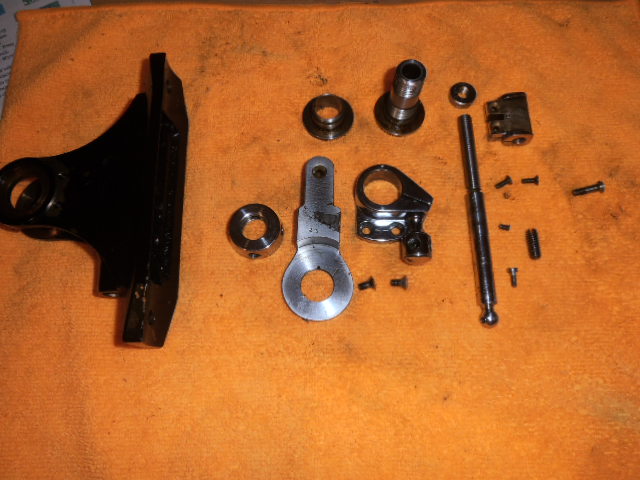 The long rod is the worm.  Above it is the knurled ring nut.  The carrier is to the right.  When I got it apart I found the worm would not go through the carrier and the knurled ring nut also bound a bit on the worm.  I first thought since the carrier was split and adjustable that it was too tight. Not the case.  The worm threads were the problem.  I was very fortunate that the threads were SAE 5/16" 18 TPI.  My $14 Harbor Freight die set had both tap and die for that.  Normally I wouldn't trust a $14 tap and die set, but here the worm was soft steel and the carrier was brass.  The knurled ring nut was soft steel.  Off I went.  The threads on the worm chased very slowly, but I was able to work through the bad areas just fine.  The carrier was okay and I just ran the tap through it.  Same with the nut.  When done it all worked like it should.  Then to lubricate and reassemble.

This is the carrier and latitude arm. 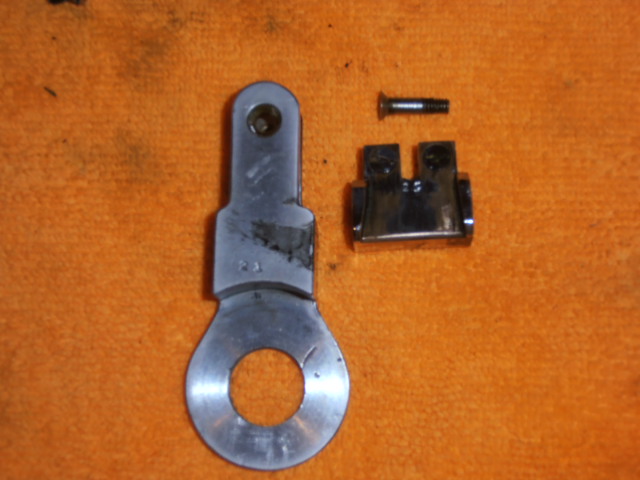 The is the latitude adjustment mechanism outside of the scope bracket.  It has to come apart and go inside the bracket, but look like this when in there. 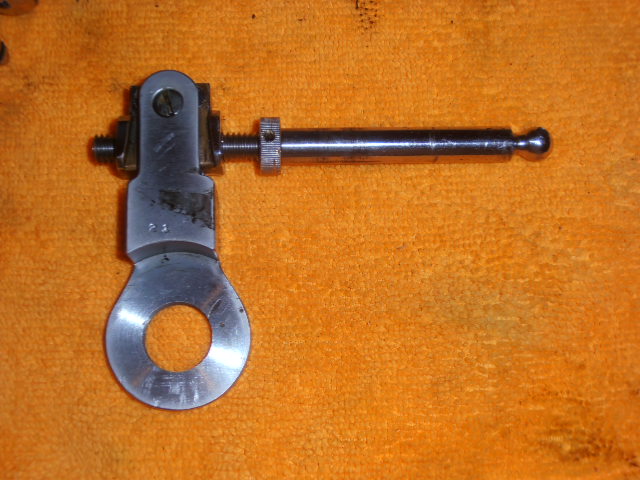 And this is the bracket back together. 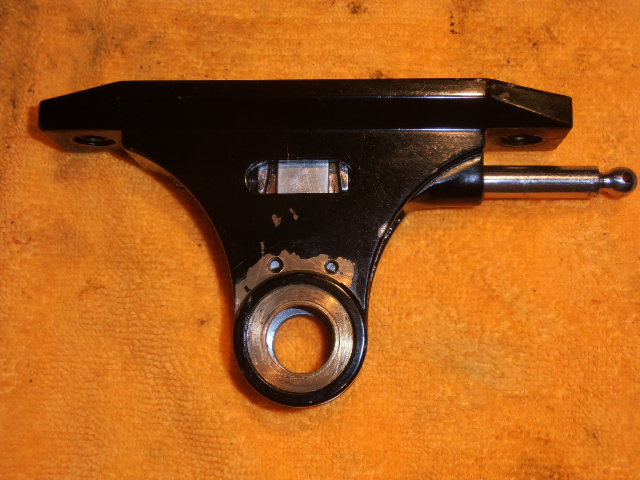 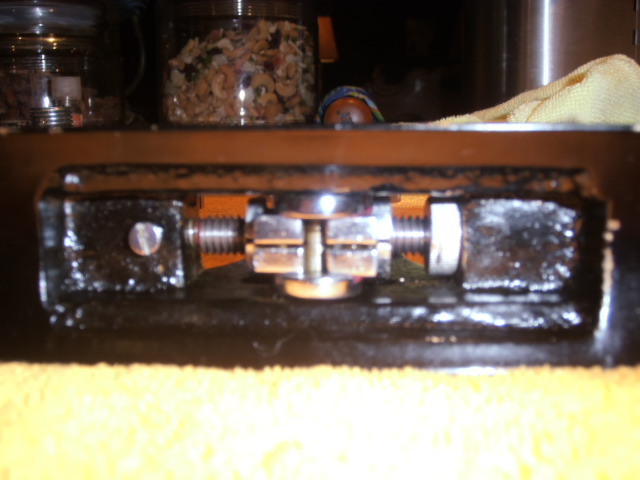 Finally the latitude pivot and CW shaft had to go back together with the CW locking clamp and the latitude lock nut. 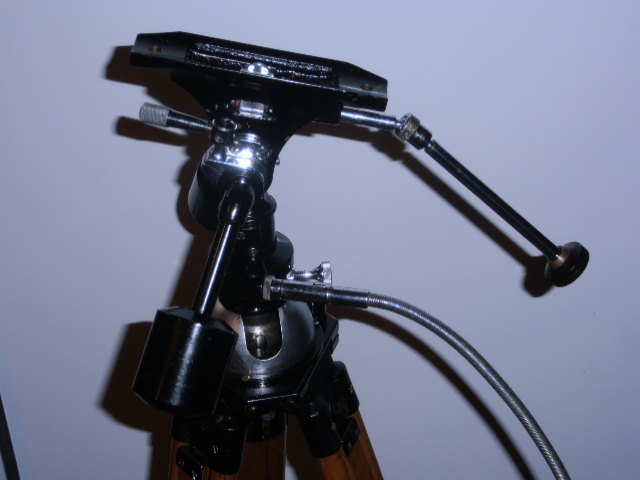 This was the next to the last project for this scope (besides further prettying up).  The last project is to see why my latitude set nut that comes though the plate on the bottom of the mount (Dave talks about it in his video) takes a padded wrench to turn.  Dave's moves freely and needed the lock nut in the aluminum dome area to keep it set.  Something to do tomorrow.