I recently started a thread on the SSO Forum where is shown the first view on this attached here.

Extract “... picking Mercury up in the 16.3” much of the aperture was destined to be masked by the fence so rather than endure a slowly increasing irregular ‘triangular’ aperture I applied the 6” off-axis mask.

Still much atmospheric dispersion at that time but as usual this was nicely countered by the orange #22 filter (a #21 is almost as effective).

Went to full aperture as it cleared the fence: just at the point when the rising sun seems to whip up some turbulence.  BUT...time and again I have found that there is often a marked settling a little while after sunrise; then after some 20-30 minutes a more serious breakdown – often sudden...

As mentioned there the initial view was with the 6” Off-Axis mask on the D-K + #22 filter: and yesterday morning another, and better, view with that setup.

Alas this time thick fog came up as the sun climbed – so no full-aperture view.  But that first view of yesterday is shown here below the full aperture one from Sept 19; and it was at that point that the seeing was near perfect....

This had been a night of improving definition with marvelous views of all sorts in Orion after a rendering of the Lynx Intergalactic Wanderer globular – to follow here. 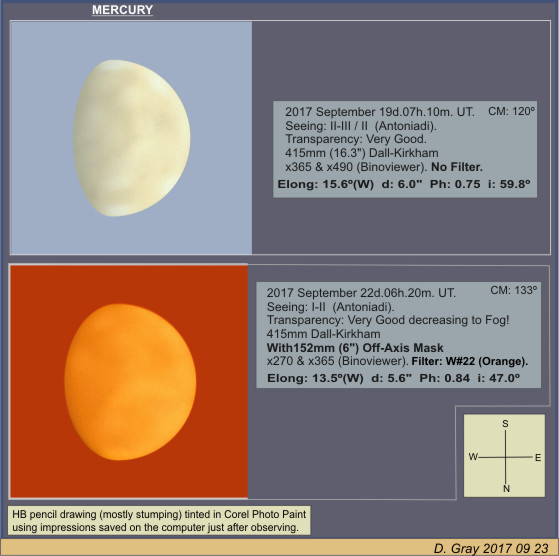 I like the wratten difference here, a great compliment to the IL view.

If conditions come together for the next morning elongation (Dec/Jan) I will be attempting..........

Wonderful report and  sketches as always.

Was hoping to follow these views with some of Mars; but only one so far: tho’ too poor conditions for sketching;

even with the orange & red filters catching the NPC and Syrtis Major but only weakly....

When I see your sketches I am always in awe of the detail you can put to paper.

Is it possible to connect some of those albedo features with real surface features?

Is it possible to connect some of those albedo features with real surface features?

If you click the link on my first post here to go to my earlier post on the Solar System Forum I give several links on my Post #7 there which deal with the nature and aspect of the planet’s features.

In short Mercurian features are very much determined by the numerous bright ray craters.  This makes it different to the aspect of the moon's darker albedo features which is largely due to the extensive dark mare regions.

One of those links I put here shows on its third page some images etc. that demonstrate the effects of those ray craters:

The darker shadings/albedos mostly being the areas between.