At October 25th  T. Kojima detected an increasing brightness of a 14 mag star in Taurus. The star showed no variability since 2014, so it is thought to be a microlensing event. The event has the number TCP J05074264+2447555, which contains the coordinates of the star.

The maximum brightness was around 11.2 mag. It is expected decreasing now.

The full moon is around 40 degrees away from that region, and comes closer ever hour. At first, I thought I could observe it with my 4 inch refractor. But the bright moonlight washed out the fainter stars. So I brought my 12 inch Dob outside. It was not cooled down yet. Nevertheless I was able to see the star. I measured it to have around 11.9 mag. It is decreasing in fact.

If possible observe it in the next hours with the moon away a few dozens of degrees. The next chance is waiting for the moon eastward of Taurus, which is not before Monday. Because the star is decreasing it may be a less conspicuous.

Of course, I have really "seen" the microlensing, if I observe the region a few days later and see a further decreasing. May be there is enough time to measure some kind of light curve.

The bright star in the sketch is SAO 76967 (8.8 mag). The remarkable triangle southwest of the SAO star helps to estimate the angular distances.

I wish I could. It's cloudy here and won't clear up until the Moon is well within Taurus.

Thank you for sharing

I hope to observe it soon.

What an esoteric find!!!!! Thanks for the heads up. The magnitude range as well, though faint is still within the envelope of many amateur instruments.

Thanks for the info (Microlensing visuell! Observe it NOW!)

That’s a great catch Uwe, another strange object after CTA102.

Thank you for this info,

Here's my sketch of this strange object. With the 96% moon only 10° away, it wasn't an easy observation: moonlight was shining on the mirror! But the starhop is easy. Brightness is decreasing: my estimation was 12.4 (based on an AAVSO-chart).

It seams that it decreases rather fast. It looks like I get a clear night and will look again.

I plan to post a sequence of renderings on this Forum as it fades to normal.

Tonight I still have the same magn. estimation than yours : +12.4 between +12.0 and +12.6 on the AAVSO chart. As stated by Uwe the moonlight was not very helpfull !

Here my own sketch : 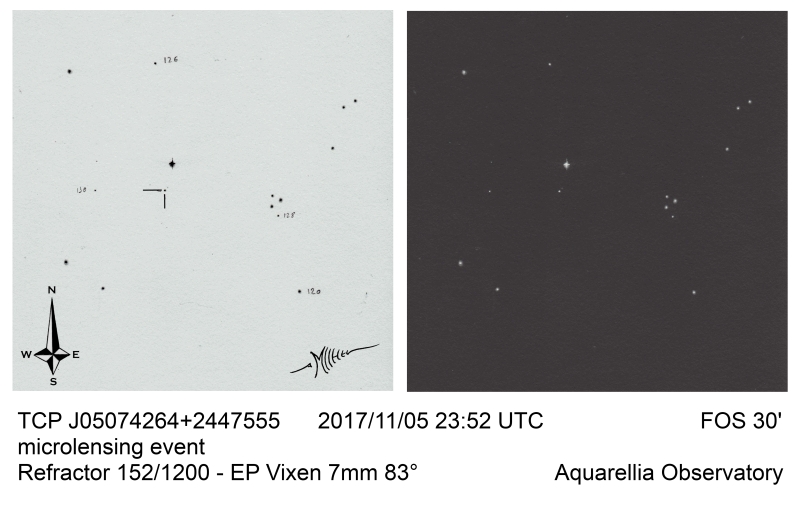 what  is  the  maker  of  this  microlensing?

The star is observed for some years with no brightness variation. Microlensing is just the most plausible explanation. A strong argument for that would be if the spectrum remains constant during the change. This excludes all of the explosive changes, and therewith a star bang.

I had a hard time detecting the star with the moon only 7.5 degs away. Nevertheless I found it. If you compare my sketch with the one form Friday:

- I could not detect the double star just eastward of SAO 76967 anymore. I saw it as single star, the aggregated mag is 12.8 mag. I did not see the star southeast of the triangle, which has 12.9 mag.

- I saw, however, all stars of the triangle, but with more trouble. Finally, I could hold the weakest of the stars with direct viewing.

- I could see the microlensing with indirect view securely.

I did not seee enough stars for an more exact brightness measurement, but I guess the micro lens star to have 12m4...12m5 now.

Nice captures of this star.

Yesterday we had a changing between fast moving clouds and clear sky. After a rainy weekend, the sky was very clear if without clouds. I observed the microlens star again. I estimated it to have 13.4 mag. Please compare the sketch with the one of November third (first sketch in that thread). It is very dimmer now. It was as bright as the dimmest star of the small triangle, and now it is the weakest star in the sketch at all.

Yes, and thanks to you we did it too

The estimated magnitude was close to the magnitude of the star without the lens effect : 13.8

Tonight the sky was much more dark that the one with the moonlight, we can compare. 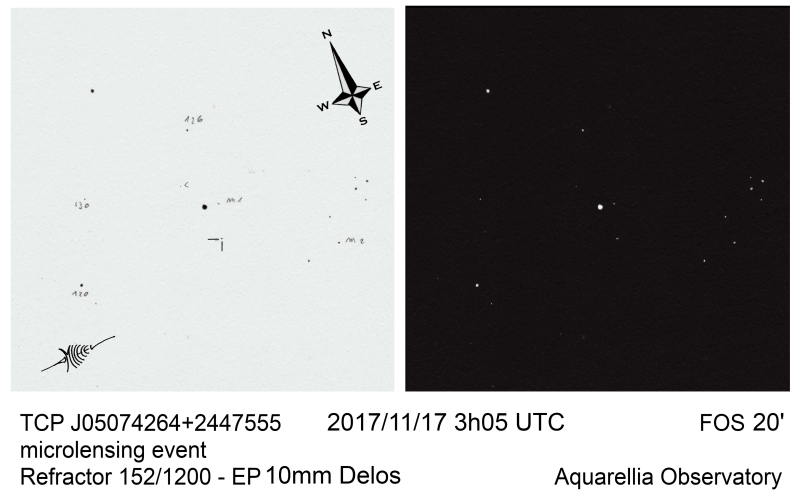 Another interesting information about this object is that "The low component mass ratio makes the microlensing event as possibly due to a binary lens hosting an Earth-sized object."  A earth-sized object detected in a distance of +/- 6000 light years,... this is just wow !