M52 (NGC 7654) is a bright open cluster in Cassiopeia, 35 million years old, containing approximately 193 members, discovered by Charles Messier on September 7, 1774. While the brightest member has apparent magnitude of 11, the combined visual magnitude of the cluster is 7.3, easily identified with binoculars.Due to extinction of starlight by interstellar gas and dust, which reduces apparent magnitude to an uncertain degree, the distance to the cluster is imprecisely estimated between 3,000 and 7,000 LY. Assuming the median distance of 5,000 LY, and given the apparent diameter of 13 arcmin, the cluster is approximately 19 LY across, or 3591 cubic LY in volume, with average distance between member stars of 2.65 LY.

Thank you for looking. 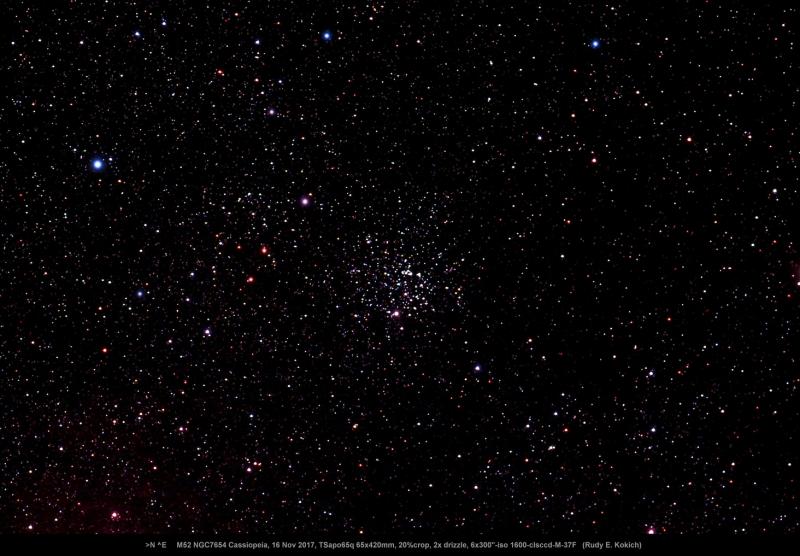 Nice. This looks like it is NOT a crop of your other photo (with the Bubble Nebula), correct? The stars in the cluster look sharper on this image than the one with the Bubble.

Yes, I also love open clusters. They are beautifu and easy targets for small telescopes both visually and photographically.

Dave, this image is a stack of only CLS-CCD filter exposures at iso 1600. The Bubble photo has an Ha stack at iso 3200 layered on top of this stack, so it is bound to have more noise to begin with. Then, the Bubble photo required much more stretching to bring out the emission nebula, which further increased the noise. On original images the nebula was barely visible. I suppose I should have done much longer Ha exposures at lower iso, but the computer battery was running low, and I was really freezing.