So today I was given a 3" Orion SpaceProbe OTA, as in for free.  Came with a basic red dot finder that will probably find a home on a different scope, and what appears to be a 25mm Kellner (it's unlabeled but usable).  Already not a bad deal.  The original tripod was broken and long gone... probably for the best. Nothing like a terrible GEM to make a marginal scope seem far worse.

Well, to make a long story short, I collimated the thing (which was no small feat, the mirror cell is primitive to say the least). After that, I pointed it at the nearly full moon, just holding it free hand against my body.  To my surprise, it resolved a pretty dang decent image. The entire moon fit in the FOV just barely with a 10mm Plossl, and the 25mm EP it came with performed well enough.

So, now I have yet another telescope, which I can basically use like an overgrown binocular.  To make the world's smallest usable Dob out of it or not to is the next question. I'm thinking yes, next time I have scrap wood lying around.

Anyone else find a "junk" scope to be far more useful than expected?

You need to get a second one and make a real pair of binoculars!

I suspect the Orion Spaceprobe is far superior to what's sold in many department stores with their guarantees of 500x. Glad you could get the optics sorted.

That's not a bad idea!

I also have two 114mm aperture 910mm fL OTAs that are identical except for focuser.  Could do it with those too.

Is just the tripod missing or is the entire mount gone?

A set of homemade Wooden legs could make the scope quite usable.

I've got one of those 3 inch mirrors from a similar scope. Probably a very old mirror...was unbelievably nasty when I got it...but with a very careful cleaning the coating looks like new.

Will make a cute little dob out out of it one day.

Good find. Put that scope on an Orion Astroview mount with an RA drive and you are good to go.

I was given a 3" Tasco reflector when I first got started.   It was no longer wanted.  .965 eyepieces but the images were quite good.

Put that space probe on a mount and use it.   Making a Dob out of it sounds like a good idea.

I was given a 3" Tasco reflector when I first got started.   It was no longer wanted.  .965 eyepieces but the images were quite good.

Put that space probe on a mount and use it.   Making a Dob out of it sounds like a good idea.

Being as it was free, I'm definitely not dropping a couple hundred on a mount.  I might see if I can get the EQ mount that came with my Meade 114mm to work with it... I just know nothing about EQ mounts and it's been abused.  I know I'd need one slow motion control knob at minimum.

Just imagine if Galileo had that exact scope! I often think of that when I'm out with my small refractors. I think he would have been delighted to have my Orion ST80 and a couple EP's out of my junk drawer.

We are definitely spoiled in this age of being able to get telescopes shipped to our doors that once upon a time were restricted to the realm of a dedicated observatory, and affordable by the masses.

I'm thankful for all of it, which is a large part of why I said yes to this little guy.  I don't know how regularly it will collect photons, but it can definitely serve a good purpose.

Another minidob is the definite direction, I’ll do it next time I have scrap plywood.

I'll take a pic eventually, but a 3" mini-dob has been made.

Used an 18" length of 1" black iron pipe, two floor flanges and a street elbow.  Made a box to fit around the OTA to hold it and to bolt to one of the flanges, bolted the whole affair to a circle of wood I bought at Lowe's.

Black pipe is way too much money, so I'm in it a few bucks more than I had hoped to be... but the little scope has already proved itself to be decent.  The mount needs a little work yet but it's not shaky which is obviously good.  Optically, it may be that my eyes are good, or it may be that I know it's there... but I swear I could see the Cassini division (barely) and some surface banding on Saturn with a 6mm Expanse eyepiece in this thing.  It's clearly not a deep sky scope, but it's plenty fine as a quick grab.

I'm not sure what role it will play in my collection (since I have other quick grabs), but it's now completely usable.

Looking forward to your photo.

I won't be winning awards at Stellaphane or anything, but functional has its own beauty. 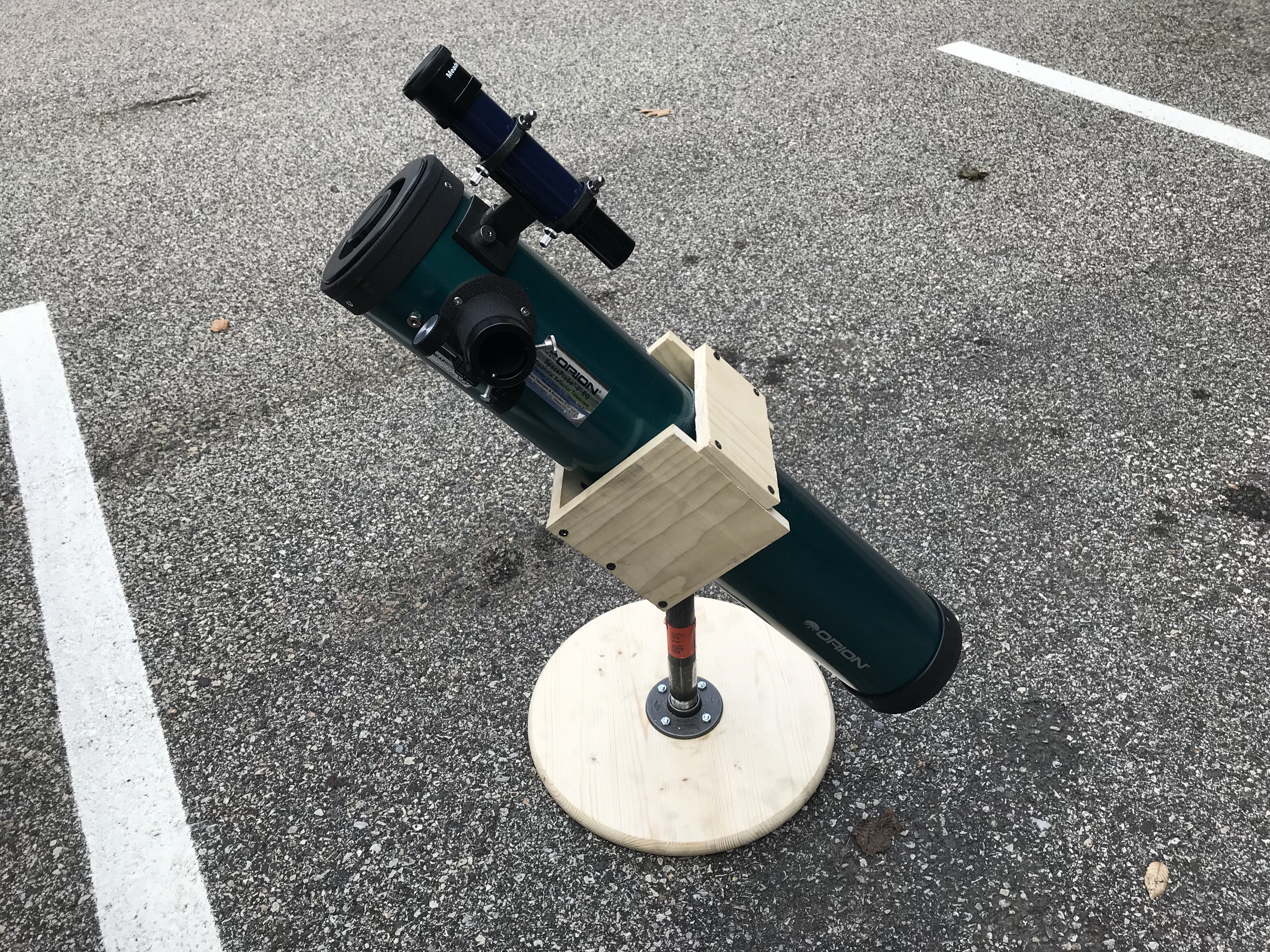 I was just given one of these complete with the Orion bag. Be glad you didn't get the equatorial mount! This one is almost brand new. It is horribly out of collimation and as you mentioned the mirror cell leaves a lot to be desired. I have printed out and bound a manual for it and I will give it to my 13 year old son. He seems very excited by it. But the kellners are mine! ;-) I went straight from Plossl's to Naglers, never got to play with kellners. I have a Meade goto kit that I canalbilzed that I may try to fit to this and make a fun project with my son.

Thanks for the great review. I was hoping it would be optically nice.