Just before Christmas I acquired a 76.2mm f=1200mm refractor labelled for the Perfex brand but manufactured by Astro Optical of Tokyo, Japan and very similar to the Tasco 10TE. I believe that Astro Optical sold this model under their own name as the R-74.

Although it was advertised as being a c1968 Tasco 10TE-5 I suspect it is a slightly earlier model (1963 – 1964) based on reading posts by Stephen (Stargoat) and others on CN. The OTA has serial number 272206 and it has the double knob cradle, a white dew shield for the finder, a 7 hole accessory tray, and the RA gear housing is not pre-drilled for a motor drive. It does not have polar axis latitude scale. There is no sign of there ever being a tag on the wooden case. Unfortunately, no manual came with the scope.

First assembly revealed that there was a lot of play in both declination and right ascension together with some stiffness in both axes. The azimuth adjustment was exceptionally stiff. Inspired by Preston’s thread on servicing a Tasco mount (which was a great help, particularly with regard to the right ascension slow motion layout) I decided to give the mount a service prior to first light. As the declination axis of my mount differs from that of Preston’s mount I thought it worthwhile to take some photos – unfortunately due to it being mid-winter and rather dark and gloomy here they are rather dark for which I apologise. Apologies also for the length of this thread, the fact that there are probably too many photos of the disassembly and not enough of the reassembly – I was in a rush to get the mount ready for some observing!

I don’t think this was the first time the mount had been worked on and therefore I can’t guarantee that all the parts that should be present (eg spacers and washers) are present or that they are in their correct location, particularly the order of spacers. 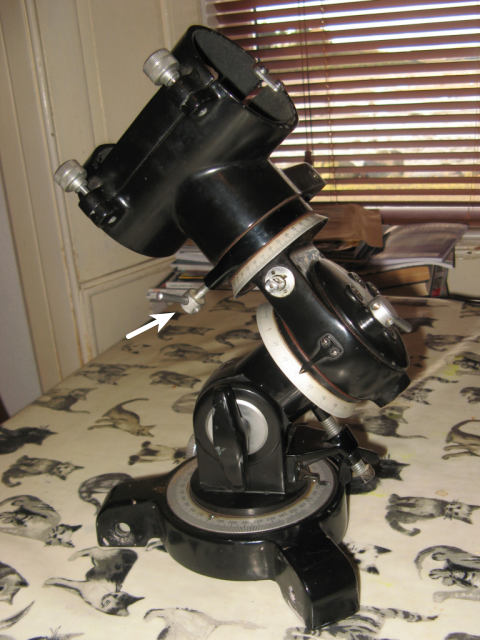 As can be seen in the pictures above and below the knobs for the declination lock (white arrow above) and the azimuth lock (red arrow below) have been swapped over at some time.  On rebuilding the mount I discovered that this would appear to have been done in an (unsuccessful) attempt to make the azimuth lock hold as the threaded length on the declination lock knob was slightly longer.

I’ve noted on the picture below the names I have used for the various parts of the mount and I have tried to keep this usage consistent throughout this thread. 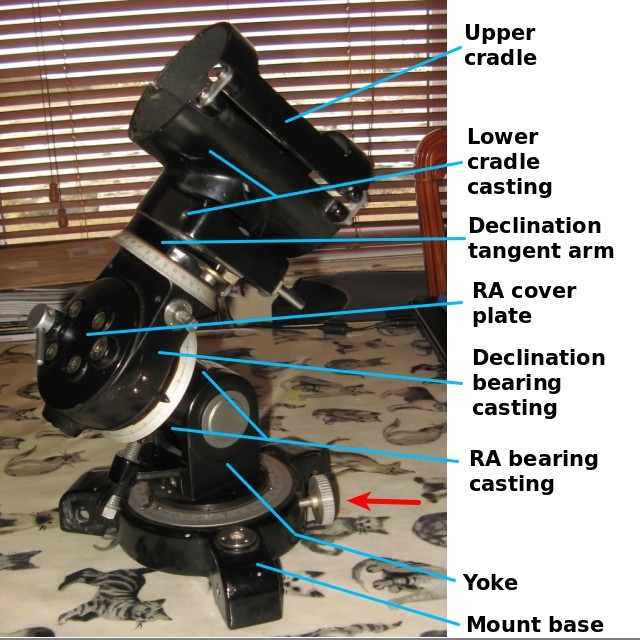 The free play in right ascension (RA) was due to the RA worm being able to move back and forth by around 1mm as shown below – it’s easier to see if you look at the grease markings on the worm pinion. 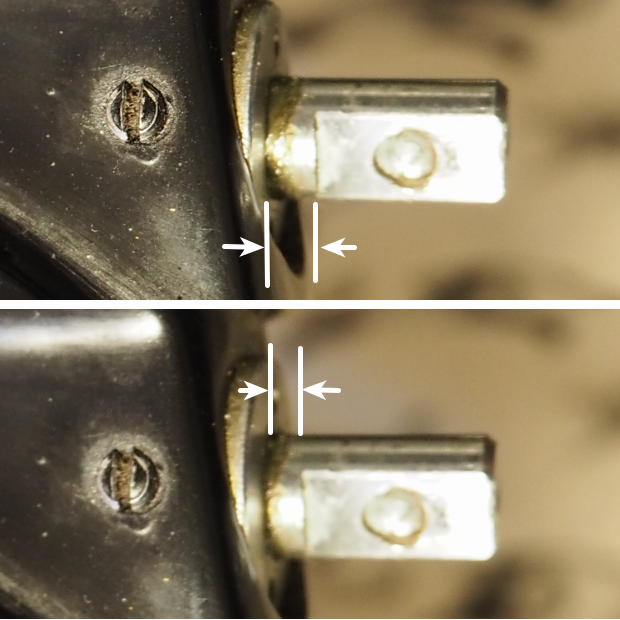 Similarly, the free play in declination  was due to the declination worm being able to move back and forth by around 1.5mm as shown in the picture below looking at the grease markings on the worm pinion. 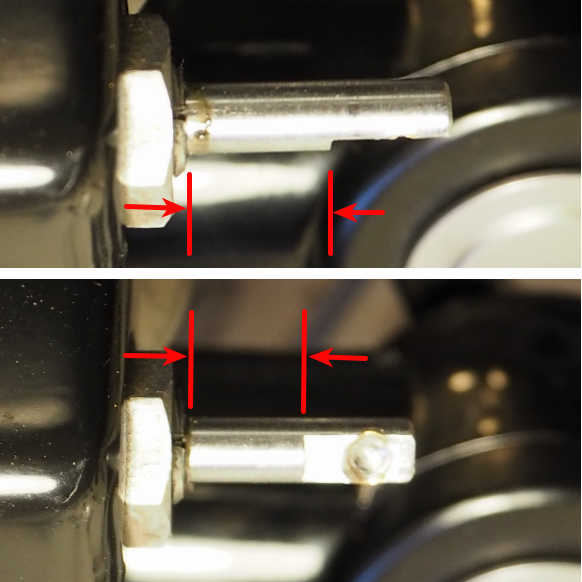 The first step, having read the advice in Preston’s thread, was to take a reference picture of each side of the mount showing the RA worm pinion and eccentric bush in order to have a note of how the two divots in each bushing (red arrows) were aligned in order to have a starting point for positioning the pinion when rebuilding the mount.

I have a very similar, if not identical, 10TE mount that is lying mostly disassembled on my workbench.  I started working on it quite awhile ago.  I needed to buy a tool, so work stopped.  I took lots of pictures as I was disassembling.  Unfortunately, I broke my phone a couple weeks ago, and the pictures were on there. I am repairing it, so that I can recover the pics, but that will take a bit.

The point is, this thread comes at a great time for me.  I was intending to wade back into it, and go from memory.  This thread will likely be a great help.

Thanks for doing it, and DON'T apologize for too many details or pictures.  The more the merrier! 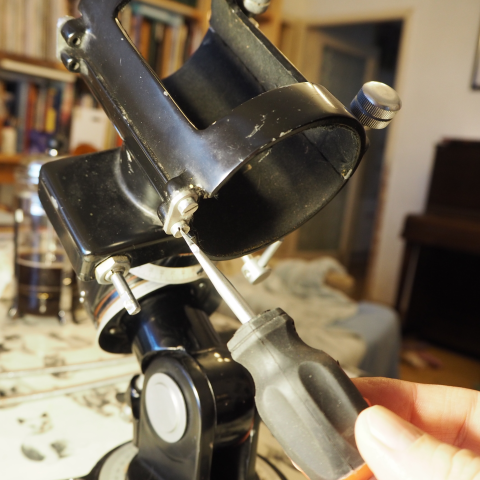 Next, the felt lining to the inside of the lower cradle casting can be peeled back to get access to the brass ring that secures the lower cradle casting to the declination bearing casting on the mount.  There are two divots, spaced at 180 degrees, which allow the ring to be unscrewed with the use of an optical spanner.  One of the divots is marked by a white arrow, the other one is hidden by the felt lining to the cradle which I had peeled back to get access – I subsequently decided I would replace the felt and removed the old felt completely from the cradle.

IMPORTANT – there is a small grub screw (to which the screwdriver tip is pointing) which is seated between the ring and the alloy body of the lower cradle casting.

The RA worm (red arrow) can be seen through the opening in the bottom of the lower cradle casting.

This grub screw (yellow arrow) must be removed before attempting to undo the brass ring.  The picture shows the grub screw partially backed out.  Once removed it was set aside in a tray to keep it from getting misplaced.

The white arrow shows one of the two divots, spaced at 180 degrees, which allow the brass ring to be unscrewed with the use of an optical spanner / spanner wrench. 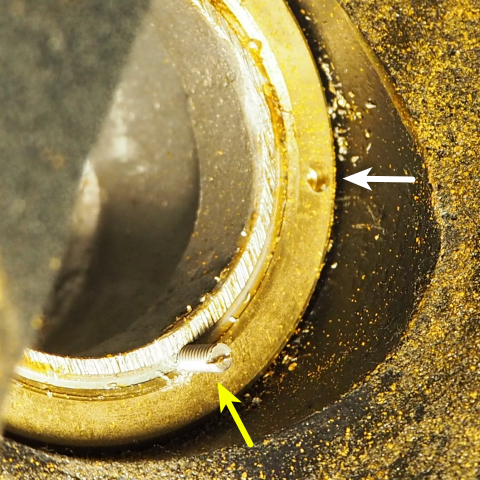 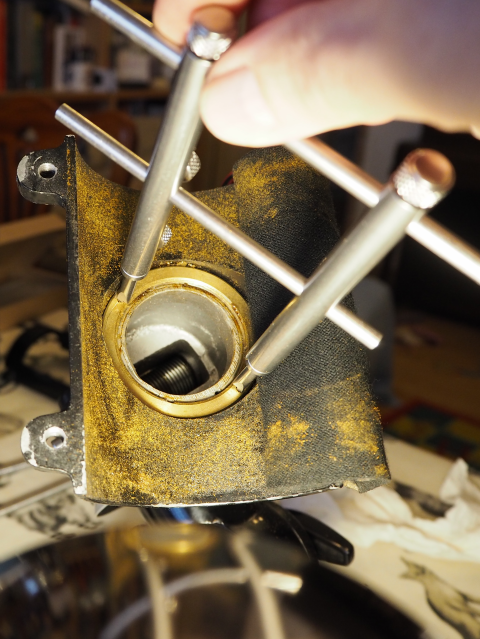 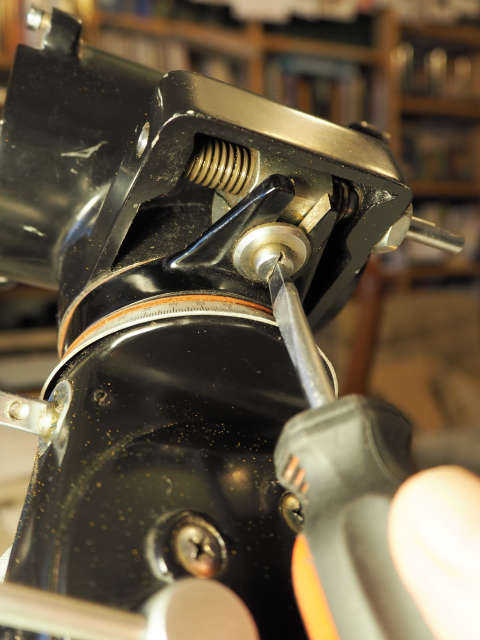 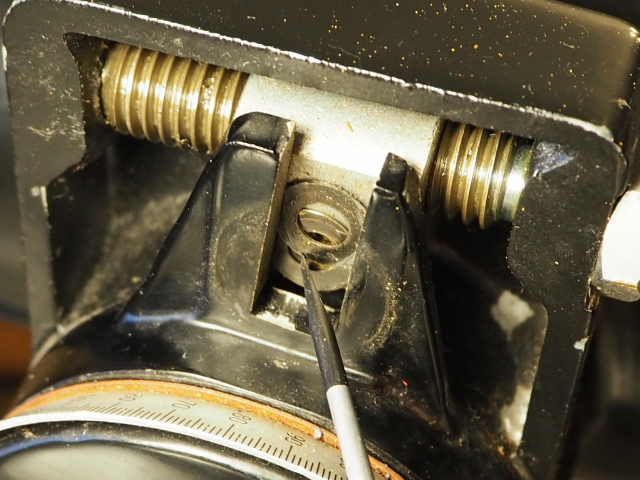 Shown below on the left is the screw, washer and square brass block (which slides between the two sides of the slot in the tangent arm) and on the right the same assembly along with the two spacer washers mentioned above.  The screw, along with the three washers and brass block, was threaded back into the declination slow motion worm block to stop them getting lost as shown in the next photo. 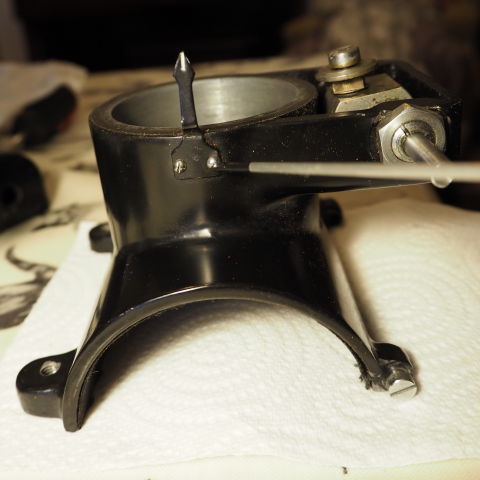 The declination slow motion assembly can then be disassembled from the lower cradle casting – starting with undoing the large chrome plated lock nut and removing it. 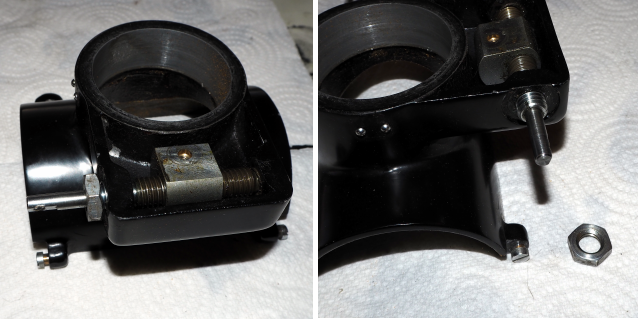 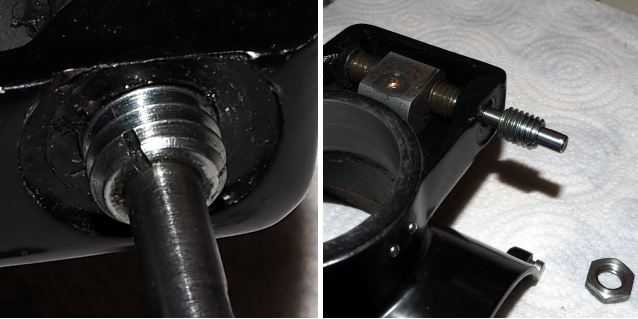 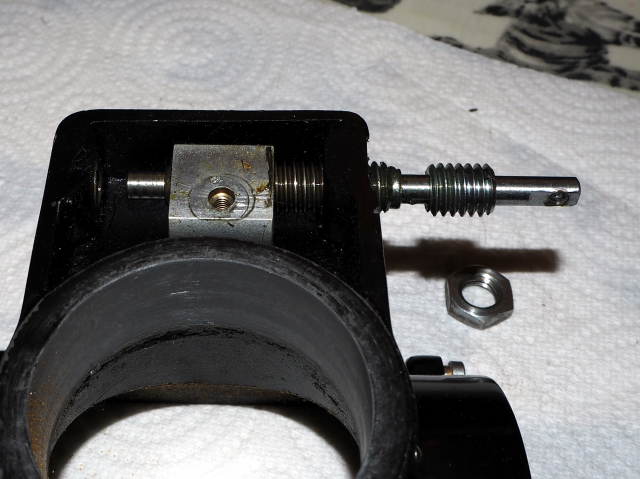 Strangely, there was a lot of aluminium swarf (blue arrows) mixed with grease around the top of the declination bearing where the brass retaining ring screws down to retain the lower cradle casting.  This was all cleaned out before reassembly.  The yellow arrow points to the location where the grub screw that locks the brass retaining ring in position sits.  (As noted above, the declination and azimuth lock knobs had been previously swapped over and the lock knob in the picture should actually be used for the azimuth lock knob.) 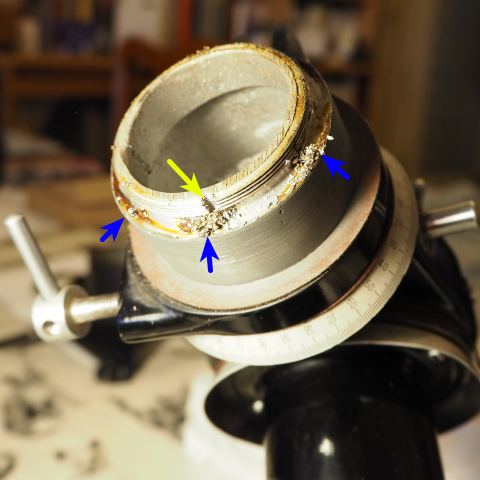 Between the lower cradle casting and the declination tangent arm were two red fibre washers (red arrow) which were carefully slid over the declination bearing surface and removed. 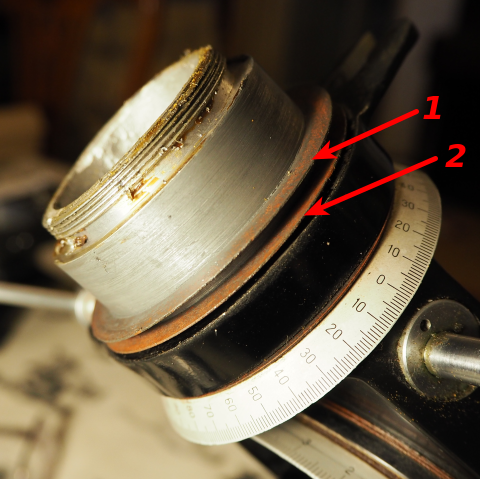 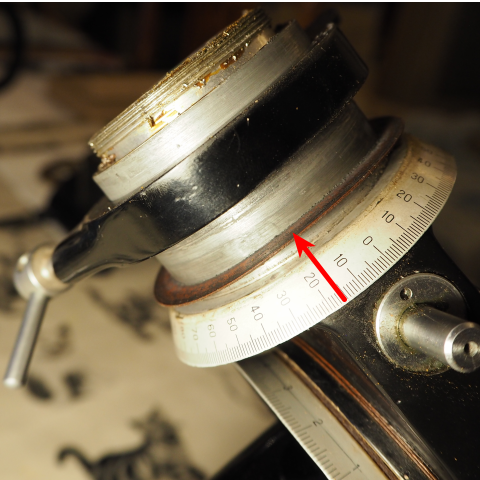 When removing the tangent arm note also that there is a shaped brass (red arrow) which acts as a brake shoe which is pressed against the bearing surface when the declination lock knob is tightened, which can fall out and roll away on the floor unnoticed if you’re not careful.  (As mentioned in the second post the declination lock knob and the azimuth lock knob had previously been swapped over and the knob shown in the picture is actually the one that should be used for the azimuth lock.) 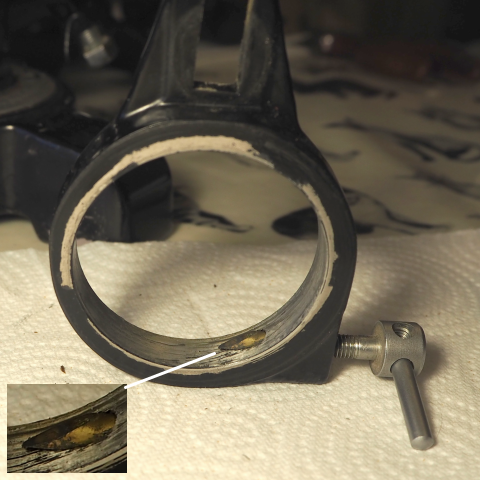 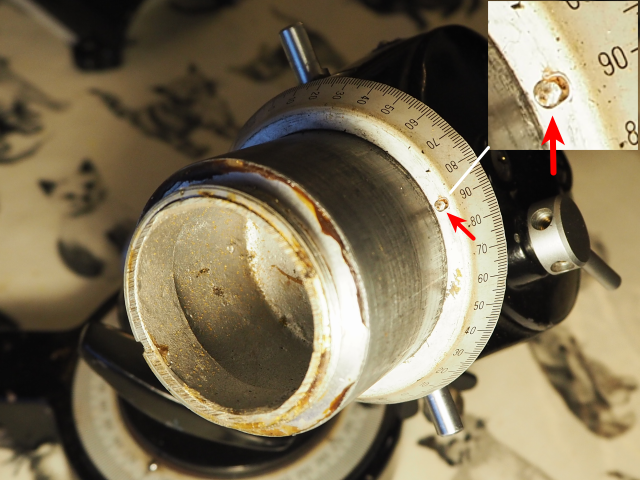 …… as it also appeared to have been glued on as there was evidence of glue on the seat on the declination bearing casting and also running down the side of the casting. 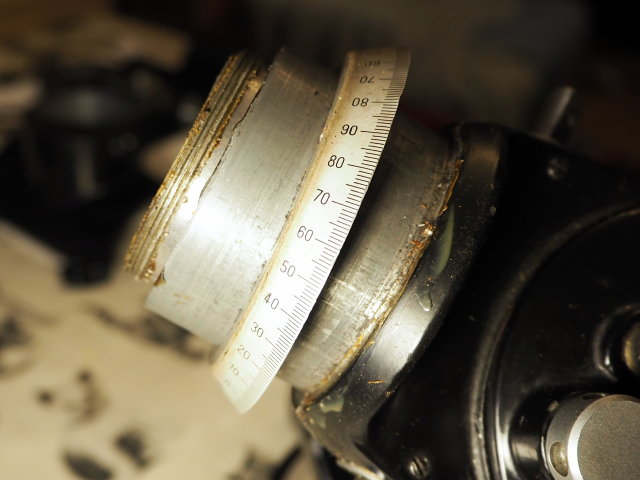 At this stage the two RA pointers, one on either side of the declination bearing casting, were removed to prevent them being damaged. As with the declination pointer, the retaining screws were replaced in the casting to keep them from being lost. 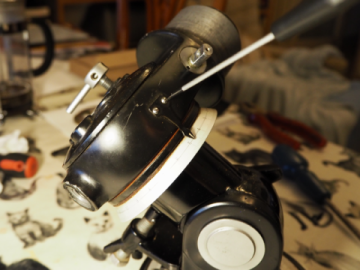 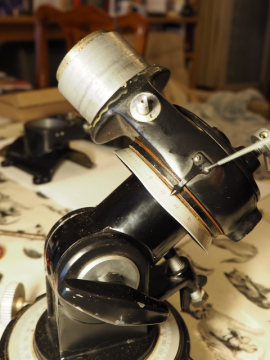 Now to dismantle the RA slow motion mechanism.  As recommended by Preston, the RA lock knob (1) and the large screw (2) 180 degrees opposite it which locates the RA brake ring should be removed first as this will enable the RA cover plate to then be removed without disturbing the mechanism underneath. 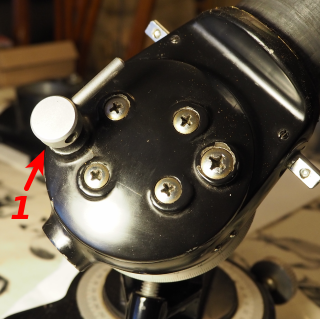 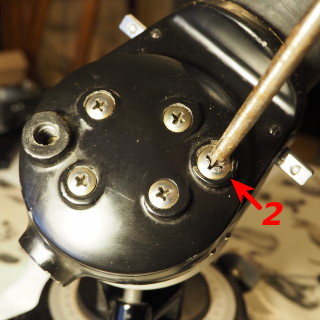 Then the four screws which form a cross pattern (having grown up in the Southern Hemisphere, now that I am north of the equator, I miss being able to go out and see Crux) and which retain the RA cover plate can be removed. 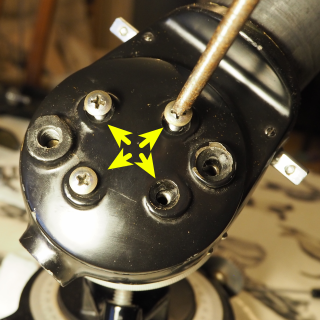