The RA cover plate can now be lifted away revealing a large red fibre washer (3) and also the chisel pointed plunger (4) which the RA lock knob bears against. 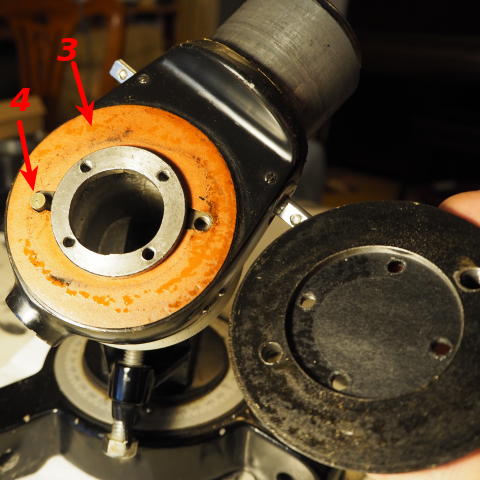 Removing the large red fibre washer reveals the RA lock mechanism.  When the RA lock knob is tightened, it forces the chisel pointed plunger (4) into the split in the RA brake ring (5) tightening it against the RA worm gear (the brass ring, 6) so that the declination bearing casting becomes locked to the RA worm gear and turns with it rather than slipping against it and rotating freely. 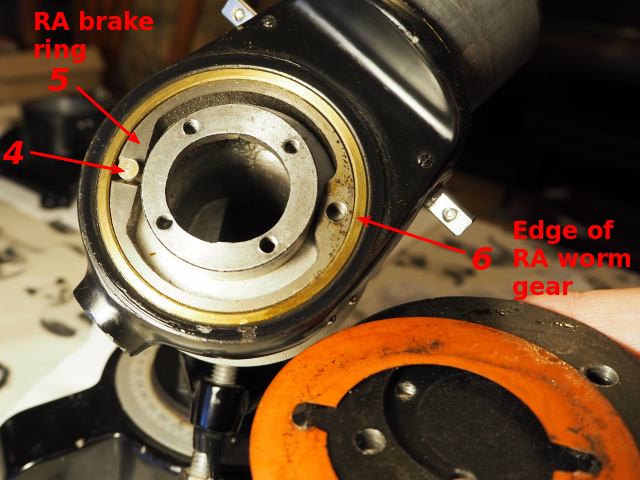 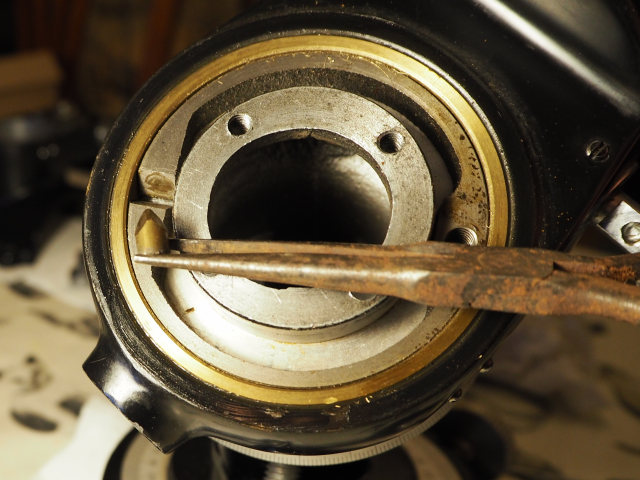 The RA brake ring was then lifted out – inserting the large screw (which goes through the RA cover plate to locate the RA brake ring) back into the RA brake ring serves as a convenient handle for lifting it out.  The split in the opposite side on which the chisel pointed plunger acts to open out the brake ring can be seen,  The brake ring is quite brittle so don’t drop it as it may break into two at the point where the locating screw goes. 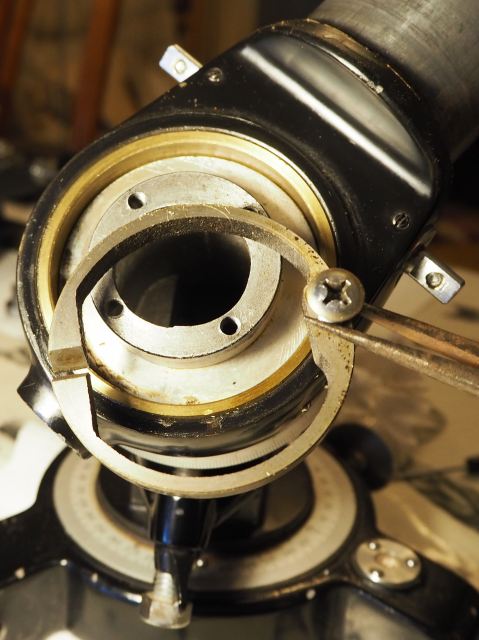 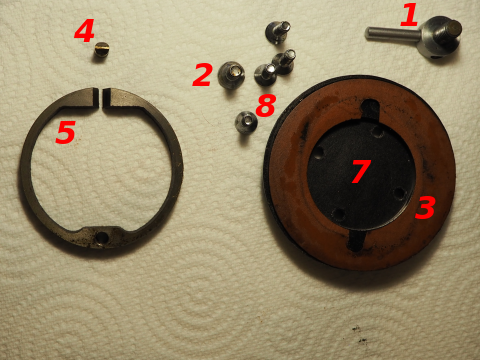 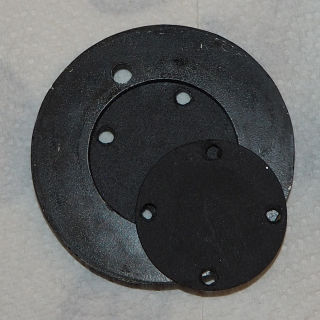 There were three gaskets in my mount (here two which are stuck together have been removed and one remains in the centre of the plate) but on reassembly I found I needed to add some more as otherwise when the four RA cover plate screws were tightened the cover plate clamped the declination bearing casting tight against the RA bearing casting prevented it from rotating smoothly in RA. 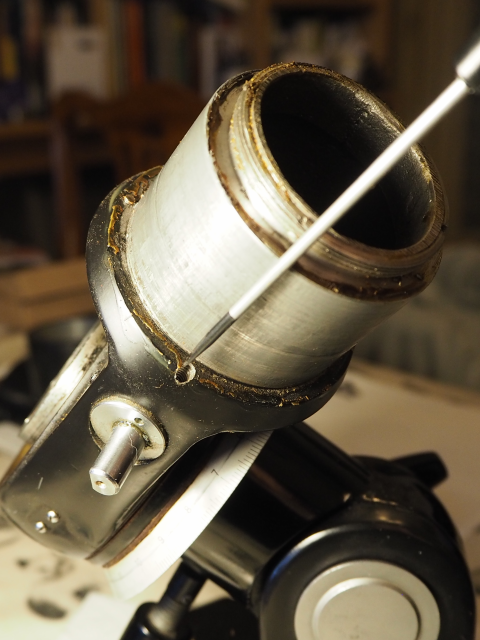 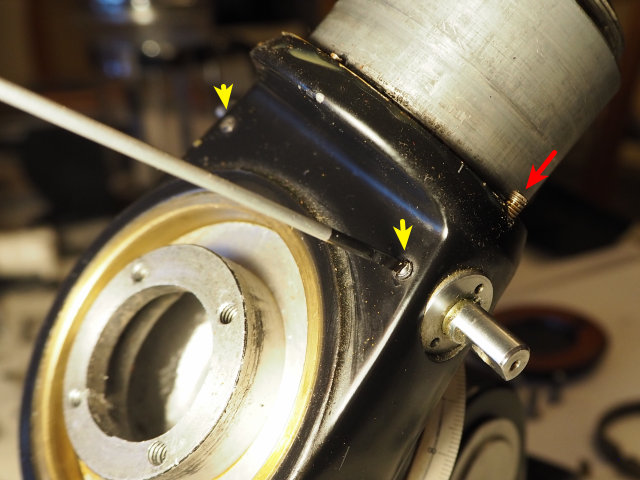 The pictures below show the location of all four grub screws, which have been partially backed out from their respective locations. 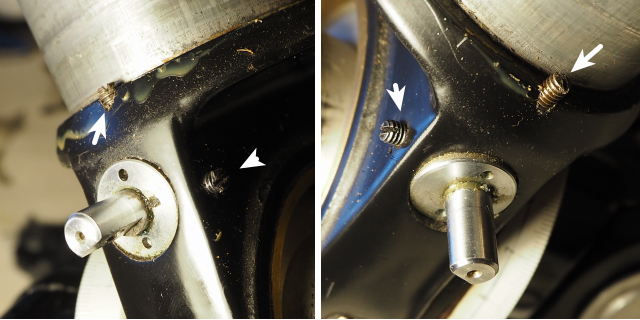 This picture shows the four grub screws, note that the two longer screws go in the upper locations, which are normally hidden by the declination circle. 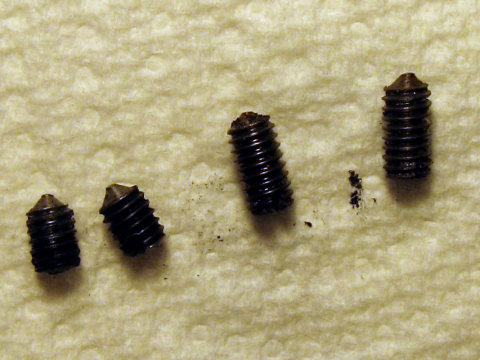 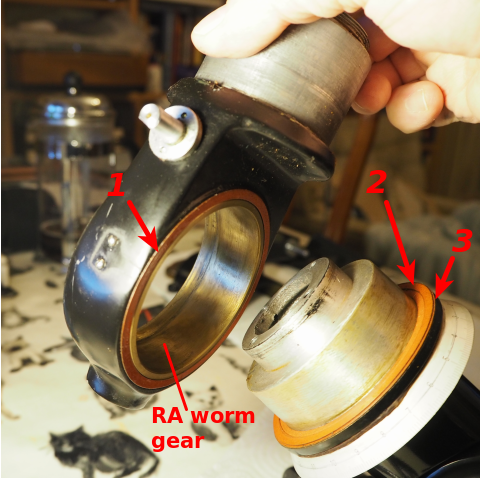 Here the other two washers, a narrow one (2) on top and a wide one (3) on the bottom can be seen.  As the first picture shows, the narrow washer can be easily lifted up from its location,  Care needs to be taken in removing the wide washers as it is a tight fit over the RA bearing surface and needs to be eased up gradually to avoid damaging it. 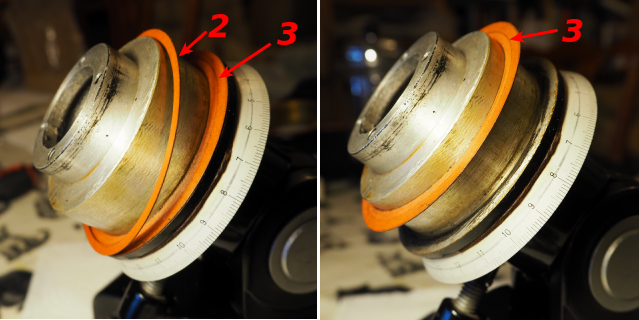 This picture shows the two eccentric bushings together with the RA worm and the RA worm gear after their removal from the declination bearing casting. 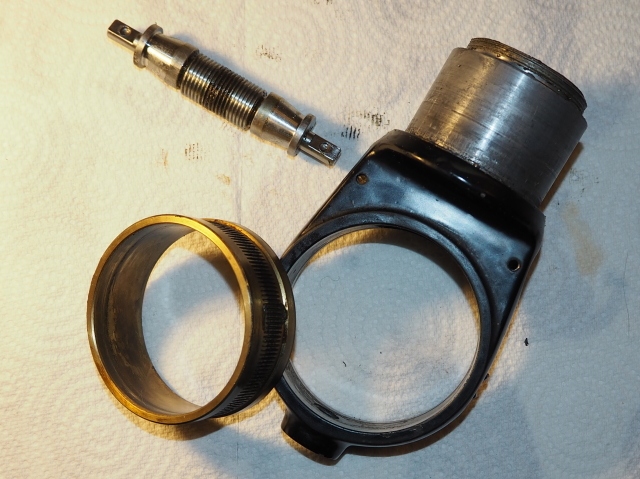 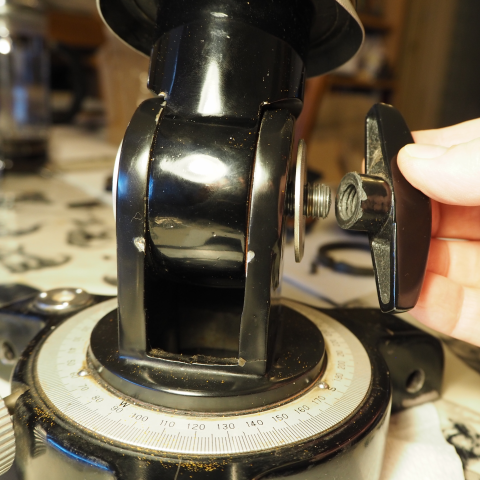 To prevent the pivot bolt from turning when the clamping nut is tightened the pivot bolt has a small key on one side (indicated by the screwdriver) …... 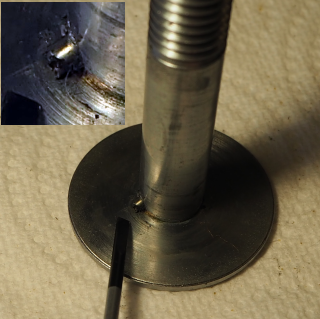 …...which locates in a corresponding slot in the yoke. 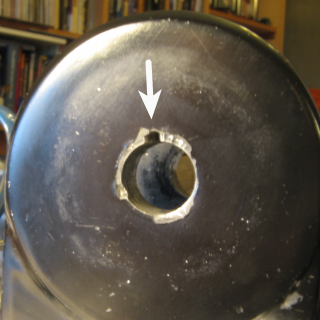 As seen in the picture below, there was another dent in the yoke on the other side, resulting from a previous insertion of the pivot bolt from the wrong side so that when the clamping nut was tightened it forced the key into the metal of the yoke, fortunately without causing any other damage. 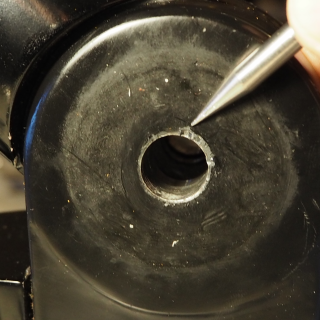 Having removed the pivot bolt the RA bearing casting can be withdrawn from the yoke along with  two large red fibre washers, one of either side. 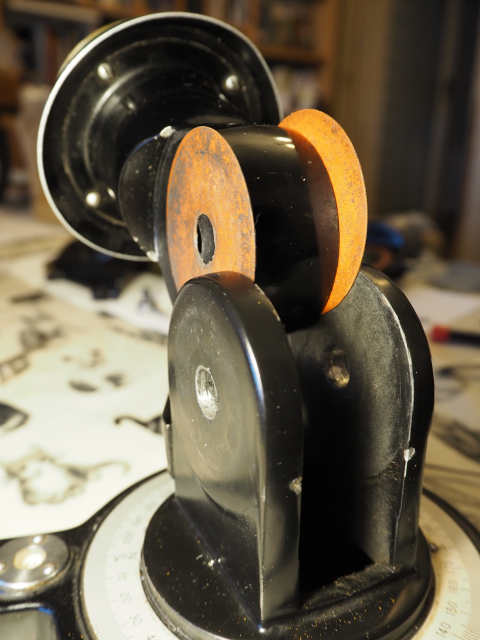 Standing the RA bearing casting on its head, the four screws (three of which are visible in the picture) and washers which secure the RA circle can be removed. 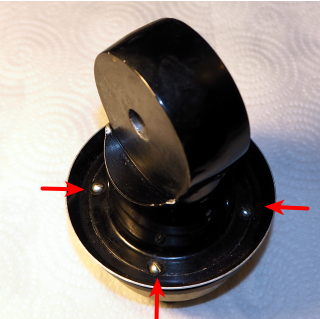 The RA circle is actually held in pace by the outer lip of each of the four washers which permits the circle to be rotated as needed to set the RA.. The washers can just be seen in this picture taken before the declination bearing casting was removed from the RA bearing casting. 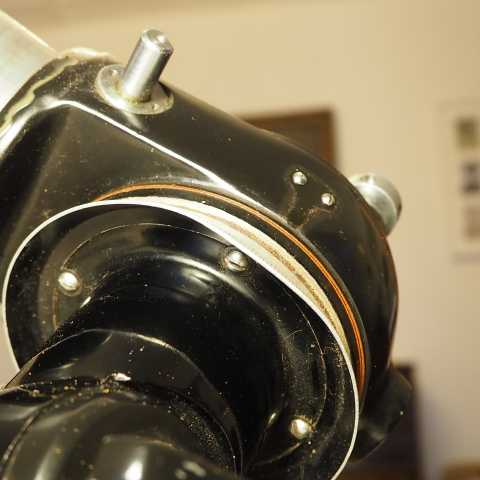 There was a washer (red arrows in the picture below– not made of the usual red fibre) with a part missing, between the RA circle and its seating on the RA bearing casting.  The missing part suggests that someone else was here before me.  What I don’t know is whether this washer was a replacement for a damaged red fibre one or whether it was the remains of the original one.

As can be seen, at some stage the RA circle had been dented on one side.  However, once removed, it was possible to gently knock it back into shape with the aid of a rounded bit of wood (part of a broom handle is ideal) and a rubber faced mallet. 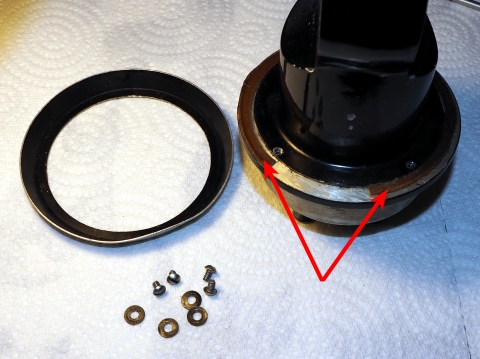 Next the adjustable support for the RA bearing casting can be unscrewed from the yoke with the screws then replaced in the yoke to keep them from getting lost. 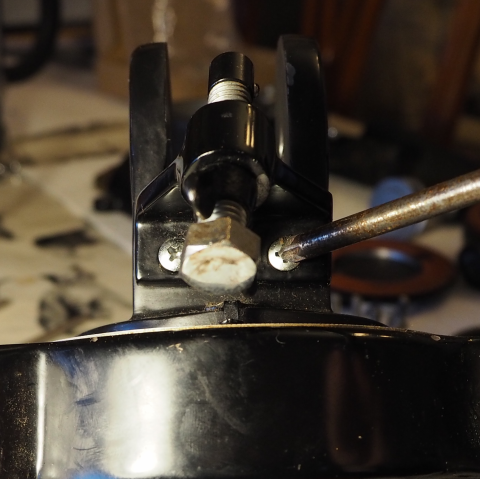 Next the azimuth pointer can be removed from the base of the yoke to protect it from damage, with the two small screws being replaced in the yoke to prevent them being misplaced. 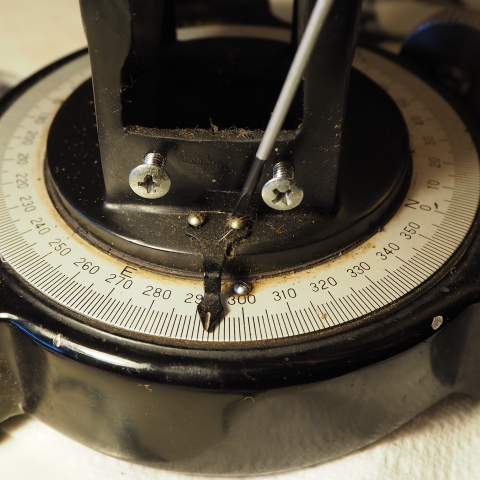 The base can then be placed on its side to give access to the four screws holding the yoke retaining plate in place which can now be undone. 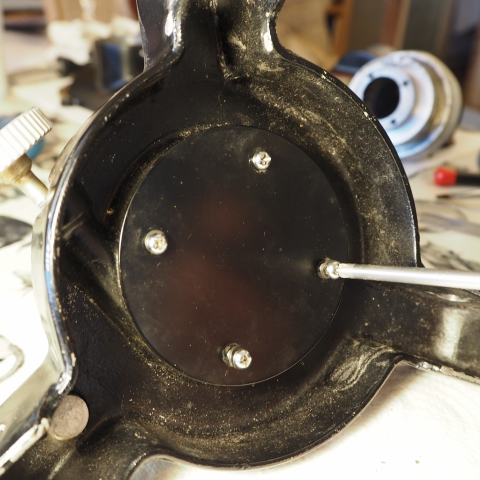 Each screw should have a spring washer but one was missing from my mount, another sign that someone had been here before me. 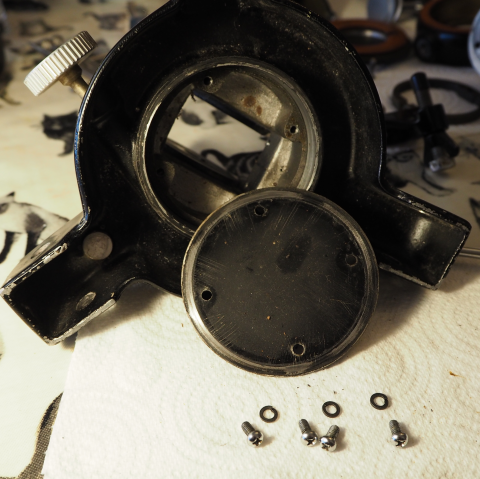 The yoke can then be lifted out from the mount base.  Note that there is a red fibre washer between the yoke and the mount base.  This is quite a tight fit over the azimuth bearing surface on the yoke so care should be taken in easing it off the yoke. 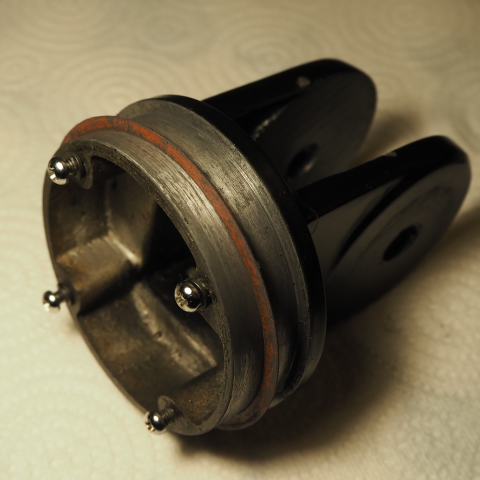 The azimuth lock operates in a similar way to the declination lock, the lock knob bears against a shaped brass rod which acts as a brake shoe and presses against the azimuth bearing surface on the bottom of the yoke -  the brass rod has been partly pushed out here.  As with the declination tangent arm, take care to extract this brass rod and put it somewhere safe, as otherwise it may fall out and roll away on the floor, unseen. 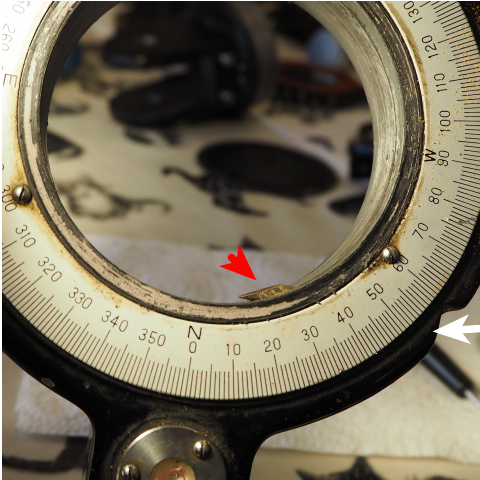 As can be seen in this picture, even using the declination lock knob, with its slightly longer threaded length, in place of the azimuth lock knob, and fully screwing it in, the brass rod was not pushed out far enough to actually press against the azimuth bearing surface on the bottom of the yoke and prevent the yoke from rotating in the mount base.  So I was still none the wiser as to why the azimuth rotation was so stiff. 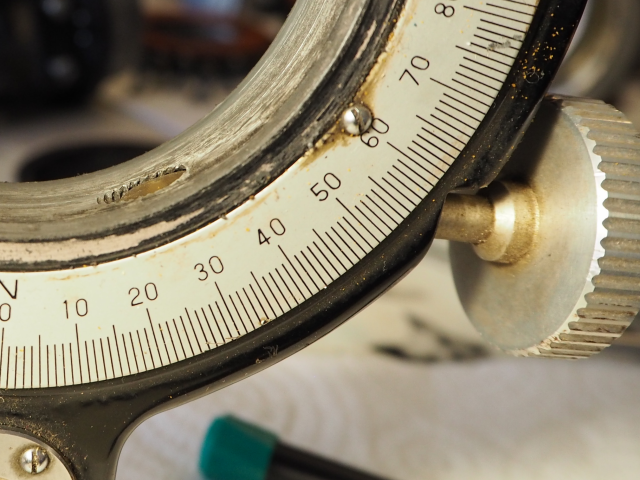