I picked this up over the weekend, a very nice early Coulter Odyssey "Compact", the 10.1" f4.5 DOB. In a casual conversation with the owner she mentioned here late husband told her he had traded for it from the rock singer Sammy Hagar in the mid-1980s. This was before she met him so she has no first-hand knowledge of the trade.

I didn't think much of it, lots of people have undocumented stories about who owned what but I decided to do a little research to see if there was any substance to the claim. Turns out Sammy was 'visited by aliens from the ninth dimension' and that spurred his interest in astronomy, amongst other extraterrestrial stuff, and in a published interview with Guitar World he is quoted as saying "It (the alien visitation) sent me on a course of curiosity. I bought a telescope, and I started reading UFO books, and I just got into the whole thing."

Anyone corroborate this or seen a photo of Sammy with a red/brown Coulter? I did a Google Image search on "Sammy Hagar telescope" but came up empty.

PS: The scope is in incredible condition, looks like it's just a few years old rather than 30+, mirrors are fine. Has the strap system and solid bottom to the rocker box to hold the mirror rather than the later open air cell.

Who woulda thunk it?

Don't doubt that Sammy believes what he said; tequila makes one see a lot of things...

That is a cool scope, with a cool story to go with it.

I joined Sammy's fan club website and have asked on the forum if there is any truth to the claim.

That Sammy sure is a cheapskate

I've watched Sammy's show on the television, I wonder if its possible

relay a message to him through the programs credits.

I was really into UFO's too, I just wanted a engine or some means of

propulsion, and me and my friends felt we could handle building a ship.

metals or end starvation on earth or something neat like that.

The same thing may have happened to Mr. Hagar, astronomy and the

telescope, and science, there are no aliens from the ninth dimension.

A while back I heard an interview with David Lee Roth. Also an interview by a fellow psychologist with Timothy Leary. In a few minutes in the interviews you realized that these were 2 examples famous who people have a public persona as wild clowns that they run with and exaggerate. It helped make both of them rich. My guess is the public persona of those two was part of who they are, but they were also both very aware and very smart about other things.

Anyone want some brown M & Ms?

Interesting story I read some years back when Van Halen was going to reunite with both Sammy Hagar and David Lee Roth.  The tour was going to kick off with some public relations event at a fancy club.  "Diamond Dave" showed up in a limo dressed in glitter with an entourage.  Sammy pulled up in an old open-top convertible all by himself, dressed in jeans and a Tshirt.

Dave and Sammy teamed up for a tour together several years ago, not long after the first brief flirt of VH reuniting with Diamond Dave and the release of 2 new songs with DD doing vocals. Their tour together did not make it through the summer, with the clash of egos (He's not called Diamond Dave for nothing).

Hope this DOES turn out to be Sammy's.

Is it really red under some dust/fading or is it actually that brownish color? Might be one of the rare interim "brown tube" Odysseys.

In real life it looks reddish brown, which isn't helping. It definitely is not the bold red Coulter used in later scopes but it doesn't look fully brown either. Not really sure what color it is. There is some dust embedded in the rocker box and base, the covering of the Sonotube is fairly smooth and doesn't hold dust the way the chipboard surface of the rocker box and base do.

What is the history of the color of the Odysseys? I have seen a lot of blue ones and red ones, not sure if I've ever seen a brown one. A Google Image search comes up with just two out of several hundred images.

There's an old CN ad here for one that is built the way mine is, trap door for the mirror, all brown.

There is no mirror cell as such, the mirror rests directly on the ends of the three collimation bolts, albeit with a plastic bumper on the end of the bolt. So it's a three-point support, which seems like not enough to me.

I can’t say if this increases or decreases my respect for Sammy.

Oh sure, next you're going to say that there's no such thing as the Easter Bunny!

It is a rare transitional brown tube.

That part of Coulter Odyssey history is pretty cloudy, there are no ads, no information

on the brown tubes.

The boxy early models have very good mirrors and nice focusers. At that time Coulter

made excellent mirrors for ATM also.

The red tubes are okay, but the mirrors got thin

and the nice focuser turned into a

but I still think they are a pretty cool light bucket, just not as

With  enough Cabo Wabo Anejo ,  The most Perfect collimation  would still not be enough to make a difference .

With  enough Cabo Wabo Anejo ,  The most Perfect collimation  would still not be enough to make a difference .

The boxy early models have very good mirrors and nice focusers. At that time Coulter

made excellent mirrors for ATM also.

I think the biggest problem with them at that time was the (lack of) a decent mirror cell.

A buddy of mine had one of the old blue ones that showed quite a bit of astigmatism.

He added a proper cell which greatly improved the images and made it quite enjoyable to use.

I always loved Van Halen, and solo Hagar.  I hated Van Hagar.  Then I read Sammy's autobiography and lost all respect for the Van Halen brothers.

I gained a new respect for Hagar, seems like a pretty down to earth guy considering all his wealth and fame.

As to being cheap, he sure can afford anything he wants.  The book mentioned that he invented (or atleast, popularized) the mountain bike and made many millions off of that idea in the 80's to 90's.

ps. there is a scope owned by Jerry Reed around here somewhere, as well.

Things sure have come a long way since Hagar's 80's. "55mph" is no longer the maximum legal limit

Regarding JakeJ's comment about the cell I can believe it. In my case the mirror is being supported vertically by three pinpoint bolts (laterally by the strap), seems like a bad idea to me.

I haven't had the chance to get this out under the stars yet, I'll report back on it when I do.

I always loved Van Halen, and solo Hagar.  I hated Van Hagar.  Then I read Sammy's autobiography and lost all respect for the Van Halen brothers.

I gained a new respect for Hagar, seems like a pretty down to earth guy considering all his wealth and fame.

As to being cheap, he sure can afford anything he wants.  The book mentioned that he invented (or atleast, popularized) the mountain bike and made many millions off of that idea in the 80's to 90's.

ps. there is a scope owned by Jerry Reed around here somewhere, as well.

I worked in a bicycle factory in 1973-4. Homemade mountain bikes were around, and had been around for a few years.  The 60's era Schwinn Stingray was one ancestor, not to mentioned chopped Hogs (Harley Davidsons).  And off road motorbikes of all ilks. People were already holding mountain bike races in the Santa Monica Mountains. Very grassroots.

But then, musicians have been stealing music and being stolen from since Og the Caveman beat a stick on a rock. A million years later a big black rectangle appeared and taught Ooog, his great x 10-47th power decendate, to hit tapirs and skulls with a stick. Oh, my point is that Hagar, as a musician, he's part of that nebulous tribe that is nebulous about who owns what.

One of my friends had a 15 year old Eddie Van Halen hanging around him, stealing his guitar licks, until he, my friend, put a stop to that. I stumbled on Van Halen playing in a boogie bar in Pasadena, CA circa 1977...

No, I don't remember much. It was a bar.

Here's the cell for the 17.5" blue tube, So the 10" is different? maybe its missing something, the

pads, or maybe the smaller models didn't have the flotation cell.

Mirror is supported by the sling and it's a 9-point flotation cell, the sling is a good idea and still used

today. Quite a few have found success using bubble wrap in a cell for mirror support, the 1" bubbles

so your mirror is floating on air.

I marked with a red arrow the factory felt index dot, and you would have another one of these

on the edge of the mirror, so you could put the mirror back the way it was found, to cut down on

collimation time when the scope is transported, etc. 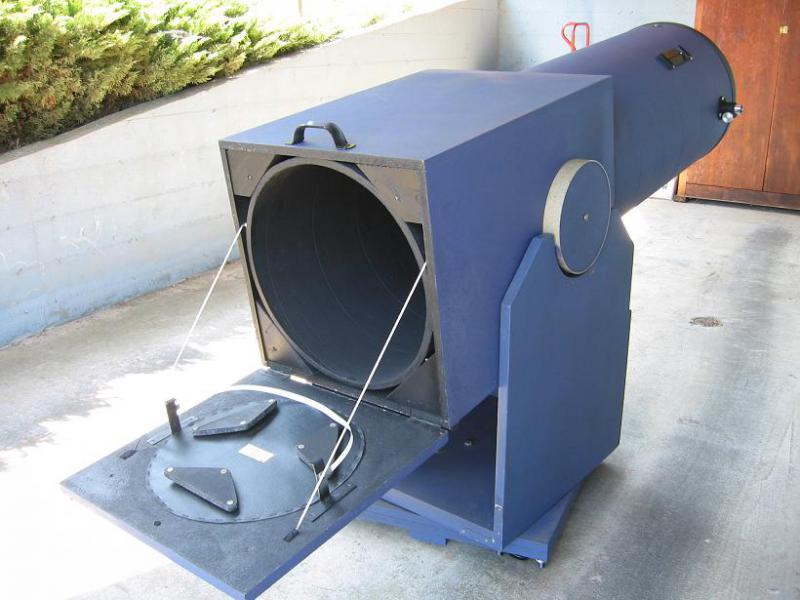 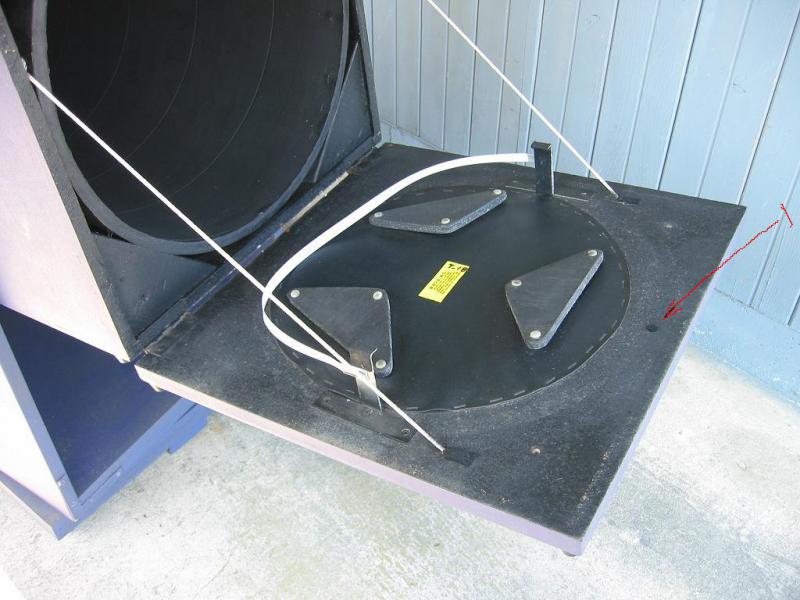 You can see the brown carried on into the next generation Odyssey without the box, which became the red tube.

Mine still has the thicker mirror, the blue tube were not full-thickness but thicker than the red tube, and the rack

and pinion focuser, left over from the blue tube, red tubes got the sink drain focuser. 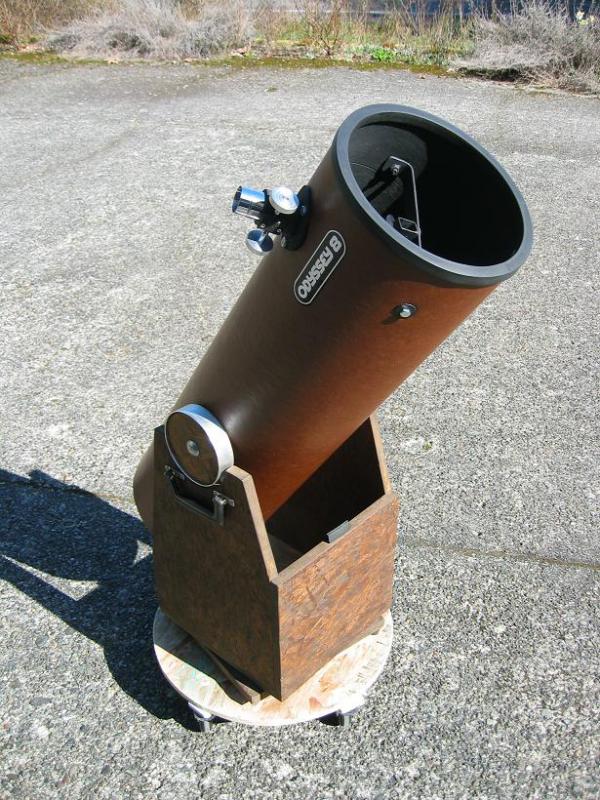