These scopes are the ones now using smooth black finish on the mounts/focuser etc. Now only one version of engraved objective cell is found. Still used is the small wood accessory tray resting on one of the wooden legs. Now the black phenolic flexible handle control rods are first used by Tasco. The pinion knobs and RA/Dec control knobs are now metal. But still there is no Astro Optical mark stamped on focuser name tag. At least two versions of the wooden box with different storage compartments inside have been found.

The Tasco 227 Power manual is now revised and thus better depicts the Tasco 227 version, thus not quite as generic as the Astro Optical manual. There are two known versions of the Tasco 227 manual.

Once again there is no mention of the model name of 7T or 7TE used in the Tasco 227 Power manual.

Here are a couple pics to reflect this version from me and another CN member.

I have the same sales flyer from Tasco which is ©1961 introducing the new 1962 models. It came from an early 1962 12TE-2 with the 1961 12TE instruction sheet. Small world. The sales flyer is from Northwestern Hobby either from Seattle or Spokane location. Scope came for Des Moines, WA.

Yes, that is correct Stephen my little Tasco was born and raised in Spokane. I bought it though the GW several years ago as a pick up only and is the scope that got me re-interested in the hobby after about 40 years. The views are very nice, the scope does show its age but everything still works great. I have a few RAO scopes and none disappoint.

I have another 7TE-5, but I don't have photos with me, but I'll post it later.

All of these scopes have superior optics.

Trying to figure out what year my 7TE is from.

I also have a Japan inspection institute tag that looks old beyond time. On the reverser side it says No. L 896668

Trying to figure out what year my 7TE is from.

I also have a Japan inspection institute tag that looks old beyond time. On the reverser side it says No. L 896668

Best I can narrow down the group of 046XXXX seven digit group of serial numbers date range is from late 1959 to mid 1960. The round JTII cardboard tag also fits into that time period as well. Always subject to revision but have to with range for present.

The first two groups of 304 Power models still per the instruction manuals found with examples do not yet refer to the scope as a 7T or 7TE. But per a sales receipt in May of 1959, 7T is written on the receipt of an example I have.

The 7TE 304 Power name finally is now called as such with the introduction of the revised instruction manuals found with what I believe are the late 1959 or very early 1960 7TE scopes. They correspond to the illustrated assembly diagram taped inside the inner lid of these scopes.

Also the Tasco sales flyer which was printed after May of 1959 based on artwork which I believe is introducing the Tasco lineup of products for 1960 is calling the 304 Power scope the 7TE. Therefore I'm assuming that in by late 1959 the 7TE's with 046XXXX seven digit serial number scope were being sold by the Holiday season for Xmas 1959.

It's essentially the area and region of the part of Tokyo they were located.  Kind of like their address.

Here's mine from a previous thread. 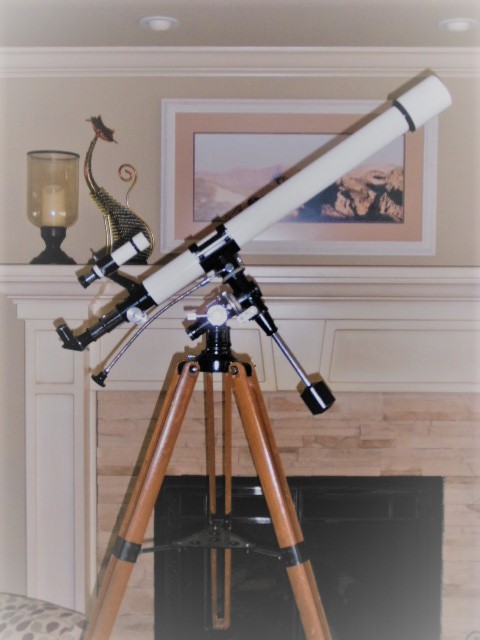 Here's my other 7TE-5, SN 761352.  The double drawtube is very handy for binoviewing.  All of the RAO sourced scopes have well corrected optics.

It's such a beautiful scope! I think it's time to restore the original .965 drawtube to mine 10te-5.

This makes a quick to set up highly excellent instrument.

My Towa clamshell had a clamchip, which I repaired with super glue. 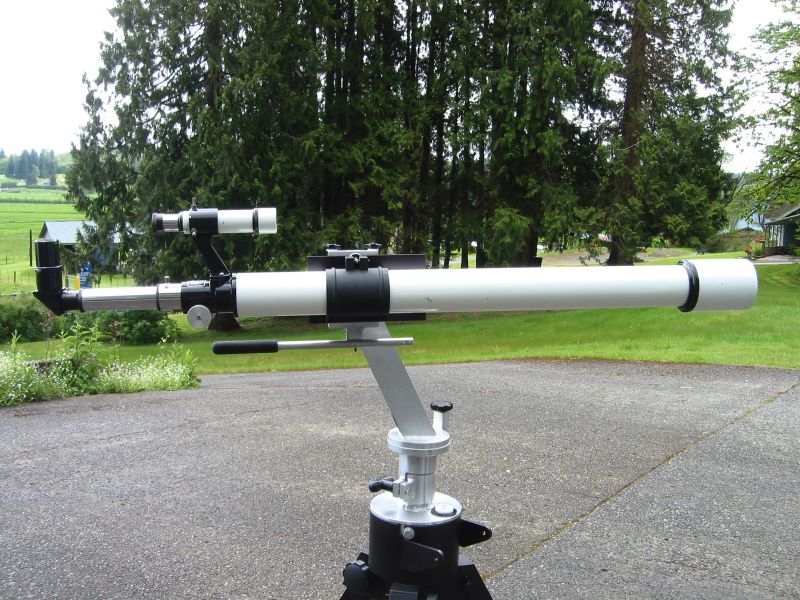 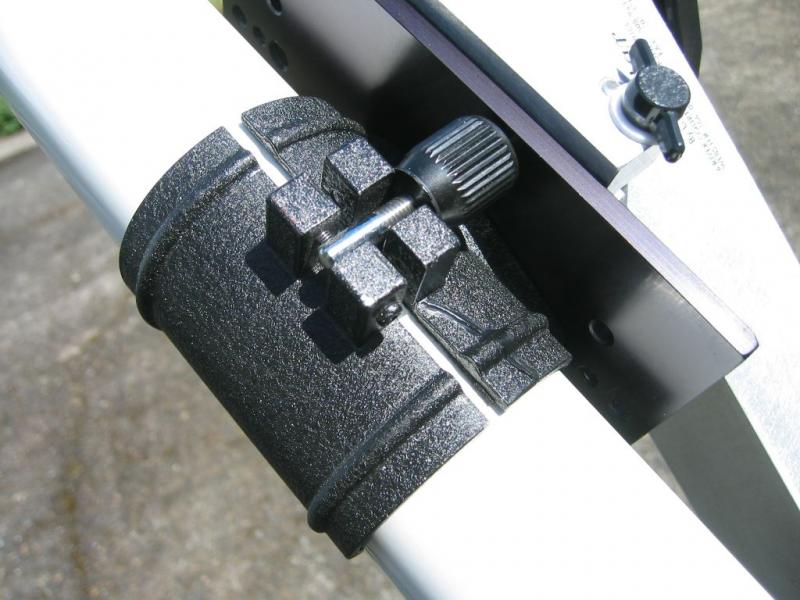 I love those wooden beer can holders! The good folks at Tasco thought of everything back in the day! I’m still looking for a attachable tray to set my snifter of warmed Napoleon brandy on my Takahashi’s tripod.

Here's some of my 304 power version.  Love the scope, but not a big fan of the storage configuration!

I had to find it under the moving boxes.

Here's some of my 304 power version.  Love the scope, but not a big fan of the storage configuration!

Keith, thanks for posting pics of this particular scope. This version is the one I've discussed with you and Chuck in the past. As it is the same version I have and is the next version of the Tasco 7TE date/linage wise.

This range follows the 05XXXX serial numbered 227 Power Model and begins the first version of the 304 Power models. I forgot to note that a Tasco 227 Power scope was found with a Macy's department store newspaper ad dating Nov 1958 for that scope.

The example that I own came with a sales receipt dated May 1959. There is 7T written on the sales receipt. This is one reason I judge these very first 304 Power scope to date back to early 1959.

These scopes still use the smooth black finish on the mounts/focuser etc. The objective cell for the first time now has the three pairs of adjustment screws for squaring the objective to the OTA. The small wood accessory tray is now replaced by the metal tray with four holes.

The same flexible handle control rods are used. The pinion knobs are the same. The mount is revised and has the Dec axis hand control knob removed, but still retains the knob for the RA axis. The addition of a hand locking knob for the AZ base is added for the first time. See ref photo of AZ Base.

Also the distinct Tasco volcano style of eyepieces are now being used and they sport the magnification engraved on the top of the eyelens housing. See ref photo of these eyepieces.

Another unique aspect of this scope is that this is the only group of serial numbers that used a translucent dust cover for the objective that fits just inside the metal dew shield. There is a distinct logo or pattern molded into the dust cover. I believe it is the logo for the manufacture of the dust cover. But would like to know if the logo pattern is somehow related to Astro Optical in some form before their distinct stamped mark begins showing up on later serial numbered scopes. If I let my imagination go wild, I see a resemblance to the RAO stamp and what is molded into the plastic dust cover. Take a look for yourself at the comparison photos below.

There still is no Astro Optical mark stamped on focuser name tag.

I believe there is only one version of the wooden box interior layout have been found to date. But for the first time there is a pair of wooden dividers used to help store the fully assembled telescope in the wooden box in which the legs and OTA are nested around the dividers.

The wooden box name tag reads:  TASCO 60mm TELESCOPE top line, 304X 146X 90X middle line and MADE IN JAPAN on bottom third line with the J having a line across the top.

Stephen, your research is very much appreciated!!!

those are really all beautiful Tasco scopes.   One of those should be at NEAF. They are a true classic.

Thanks Stephen  for your info on these interesting instruments !!!

The 7T 304X  I have - # 0461178- has the distinctive RAO marking on the focuser but does'nt have the adjustable objective cell. Smooth mount, and the single knob on the tube clamp. It also has the metal objective cover and small wooden tray as well. I also added a 1.25 threaded  eyepiece adapter as an accessory last year that allows me to use eyepieces of that size on the scope  if I choose . Gary