Started by Aquarellia , Apr 24 2018 09:16 AM
This topic has been archived. This means that you cannot reply to this topic.
11 replies to this topic

The problem when you have a long period of nice weather at night, is that we don't have to go to our prefered forum because of its name...

Anyway between the sun nice spot of today and the nova in CMa tonight I just have time to show you my Lyrids observation of yesterday morning.

After the estimation of the double black hole and Ag Dra which maybe show some erupting first signals,  I went to a special area, mainly because I want to test the site prior to the next Lunar eclipse.  So I was going to a nice vista up the village of Sainte-Croix based on the same name lake. 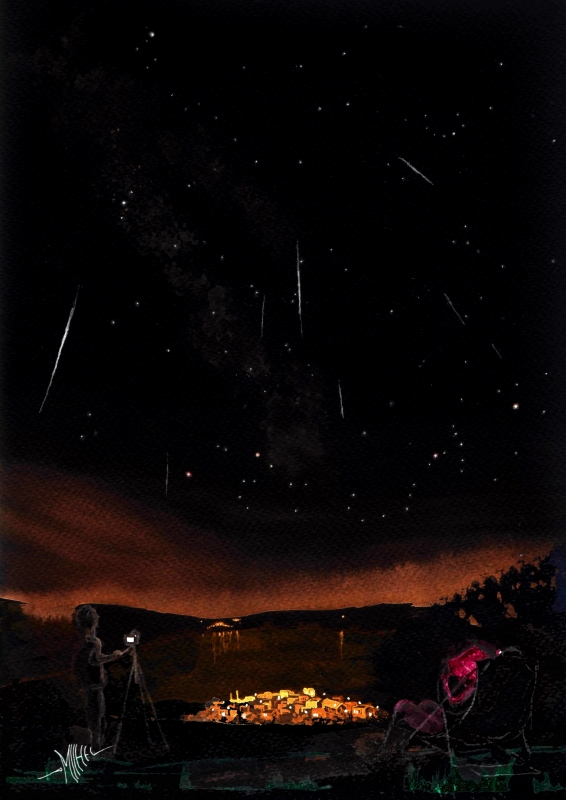 All the traces are directly spoted carefully based on the places of the villages, the stars, the planets and the Milky Way.  After that I did the watercolor on special paper at home.

The Lyrids have been observed and reported since 687 BC; no other modern shower has been recorded as far back in time.

Clear sky to you all

Again a very fine piece of art. You have always an unique combination of 'observation' and 'surroundings'

Beautiful - I love all the constellations.

Beautiful, Michel.  Wonderful sky with all those constellations, Jupiter, Saturn, and Mars, and complete with meteors!  The village, lake, and Lyrids watchers are a bonus.

I didn't know about the Lyrids being observed for so long--thanks for adding that.

I didnt know it was so old! As always, your drawing is inspiring, wonderfully done. I coud see it because of the clouds, but now I can imagine it! Thanks!

A great location for viewing the Lyrids and the planets to the south.

As always a stunning capture.

Thank you to you all for your so nice comments,

Merci beaucoup, thank you very much !

You did it with an error free french and probably on a qwerty keyboard !