As a matter of curiosity I took my photo above and overlayed it on A DSS photo from ALADIN and it strikingly shows the change in brightness of V392 from its quiescent state. 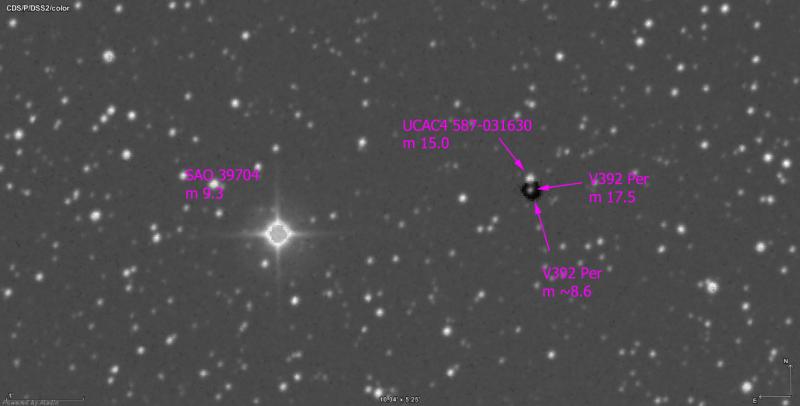 An update on the spectrum.  Note these are plotted in absolute flux rather than, perhaps more commonly, relative to the continuum so it shows the true change in intensity at all wavelengths. 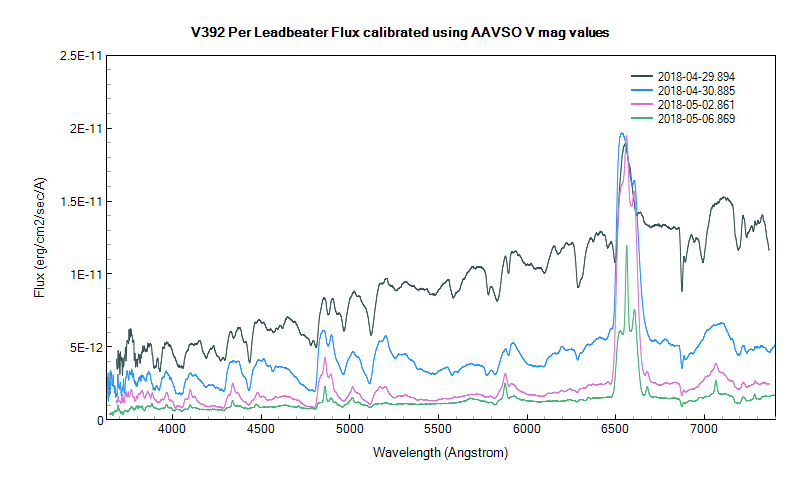 It is interesting to see how the peak H alpha intensity remained approximately constant initially but is now falling away. (Though it still dominates the spectrum) . The nova appears red-ish visually not only because of H alpha but partly because it is significantly reddened by interstellar material along our line of sight. (As seen in dropping continuum from red to blue)

With minimum 120x the light red color is detected.

Nova Per/V392 Per's light curve has taken a most unexpected turn over the past few days. Classical "fast novae" (class Na) will usually  fall steadily at a slowly decreasing rate for a number of magnitudes before their light curves start to flatten out, usually many weeks following maximum.

V392 Per, however, fell rapidly only from magnitude 6.2 at peak to 8.7 by May 5.0 UT...then became almost constant! I sighted the novae, once again only through a break in clouds, last evening and estimated it at magnitude 9.0 with large binoculars. This was a tenth or so fainter than the mean of all other observations submitted to the AAVSO overnight.

Just what this odd behavior signals in regard to this already almost unique example of a UG/Nova type star in the way of what comes next seems to be anybody's guess. I would have anticipated a steady and rapid decline in brightness back to minimum (about magnitude 15) following the outburst's peak, as is the typical fashion with a normal UG-type outburst. The more rare super maxima these stars generate bring their magnitudes to a somewhat higher level and can maintain that enhanced state for a week, or so. But in my long years of observing these peculiar stars I never recall seeing behavior of the nature currently being exhibited by V392 Per.

It would appear that this object's recent brightness plateau is ending. Last evening (May 9.06 UT) I made the star out to be magnitude 9.2 using a 120mm RFT refractor, seemingly down by 0.2 magnitudes from the previous evening. Perhaps it will now return to its previous rather rapid decline.

I would make mention that I'm becoming very frustrated with the weather forecasts recently. For three consecutive weeks now the Saturday and Sunday evening  weather forecasts have prognosticated that the weather would be beautifully clear either Sunday evening through Wednesday, or  Monday through Thursday, of the coming week. In reality, I've managed but a single usable night out of the predicted 12, all the rest being cloudy instead of clear. I appreciate that it is springtime and the weather can be a bit changeable, but such low quality predictions in the age of supposedly Space Age technology in meteorology is in my opinion an absolute disgrace...and they seem to be getting progressively more unreliable over time. In many instances of late, just as an amateur meteorologist of many years standing, I could clearly see that the official forecasts could not possibly come to fruition in the days ahead. Yet the professional continue with them. Puzzling indeed.

I took an image on May 8th. Unfortunately a tree got into the view. So, another tree then!!

After having plateaued in brightness near magnitude 9.0 between about May 5th and 9th, the nova resumed its progressive decline, the latest reported observations (May 17.0 UT) putting it at just about 11.0 magnitude. The plotted light curve of this object to date continues not to closely resemble that of any past nova, or dwarf nova, outburst that I can find in the literature.

Unfortunately, as the long run of cloudy nights in the eastern U.S. continues, for me the nova has now dropped below my low treeline to the northwest and will remain inaccessible for some time to come. The nightly number of observations submitted to the AAVSO is likewise dwindling.

For us in northern latutudes the star is circumpolar and therefore technically visible during all or nearly all year. But our nights are not dark anymore, so for most of us the astronomical observing season is over. I do not believe I will be able to observe the nova in August, when darkness returns, but I will try anyway.

Quite faint with high clouds and low altitude.

I note that, based on the AAVSO's plot of data V392 Per (observations of which are dwindling to just a few scatted points as the nova grows ever more inaccessible to observers), that the star has fallen to just about magnitude 12.0 as of tonight. This is a drop of just short of 6.0 magnitudes in about 25 days, making it a very rapid nova indeed. At this rate the star is likely to return to its quiessent state perhaps early in July, raising the question of how long it will remain there before a normal dwarf nova-type of outburst occurs. I would note that Nova Per 1901 (GK Per) waited nearly 65 years before showing dwarf nova activity following its great outburst. Just what might V392 Per have in store for the future?