Anybody optimizing their SCT optics?

Maybe it's juts me but IMO flocking offers no detectable advantage to the user, mostly it is good for the person selling the flocking material. I have looked through more than one SCT flocked with every imaginable material and I have never seen any difference. If anybody has seen an objective test with a measurable increase in contrast for astronomical use please share it with us. A photo of tube glare in daylight is not proof of anything useful for visual or photographic astronomical use. Why do people do this?

No it's not just you several of us did the flocking thing back in the early 00s (on Yahoo C14) and although we were/are very fond of our C14s, no one reported any particular improvement in contrast.  Greg N

None of us were at the level of refiguring glass optics (back in the day).  One or two people did mess with repositioning the baffle tube--because they had to.  I'm not sure what was involved but it was beyond my abilities.  Adding fans is fairly frequent even then.  Several people developed tools for tightening the lock nut directly above the mirror, which was the single most effective mod most of us made.  It allowed the C14s to hold collimation all sky.

The technique that several of us used to flock the *tube* (not the baffle tube) was to buy a flocked kendrick dew shield and adapt it to the interior of the C14.  For C11 owners and others, the outward push of the dew shield mounted internally was sufficient to hold it in place.  But if you get a C11 flocked dew shield and put it in a c14 it droops.  So largely guided by a good friend who is an engineer we used some bag expanders (used in the fall to open up large bags to hold leaves) and a thin line of RTV to get the C11 flocked dew shield inside for a good tight fit.

The procedure is described here.

At that time, back in 2006, I decided to install an internal dew heater.  This was after many failed experiments with externally mounted heaters.  To my knowledge I was the first, but you never know.  I was surprised to read that someone else in this thread had done it.  Nice to know I'm not alone.

My efforts to put enhanced coatings on a c8 were a failure.  Not something to do myself.  I shipped it off to have done.  The recoater botched the remounting of the primary mirror.  The scope was impossible to collimate in terms of getting the secondary shadow centered on an out of focus star on both sides of focus.  Planets were fuzzy and I didn't like it.  I knew if I sold the scope people would be blaming the central obstruction for the next forty years.  Being a many of many scopes I did the obvious thing which was to leave it in the garage and play with my other scopes instead.  Finally I decided something needed to be done and that I had to face the fact, if I destroyed this scope trying to save it, that would be no great loss.

So I pulled the primary and spent a few very frustrating hours trying to remove the mass of RTV which the recoater had put not just under the mirror but in the center hole.  Razors, knives, wire drawn tight in an attempt to slice it, solvents--I read a lot of stories on the internet about just how bad removing RTV can be.  Let me tell you it's bad.  I was defeated.  Finally I packaged the whole thing up in a box and sent it to Celestron with a history of what had happened.  I finished by saying "Let me know what to do.   If there is nothing that you can do then it might be best to toss it."

For a fee, they offered to replace the entire optical set!  I said yes and it came back with Chinese optics and man I LOVE THIS C8.  It's 2015 optics in a 1988 body.  The performance of this little c8 was so good I knew that my plans to sell it were over.  Very nice capable scope.  I haven't bothered to mount the dew strap internally because on a c8 power consumption is so low it doesn't matter.

Lately I've been playing with the apos and I said to myself:  why is it my C14 has a nice Astro-physics visual back, my apos have Astro-physics visual back, why, on my c8, am I playing with this light-duty adapter AP makes for the c8s and 9.25s?  So I had this part custom made, and now can use the C8 with Astrophysics ADA2003A visual back on it.  The clearances are identical to the clearances of the AP visual back for c8s.   This is really nice, and it makes the mechanics of using the rear end of the c8 exactly the same as using the CFF that rides on top of it.  Now you may wonder, why, if I insist on having a classy astro-physics visual back, I also have that $3.00 piece of plastic on there as a fine focus knob.  The answer is, I think it does a better job than the Feather touch focuser.  I love FT focusers but am not keen on what they've come up with for SCTs. 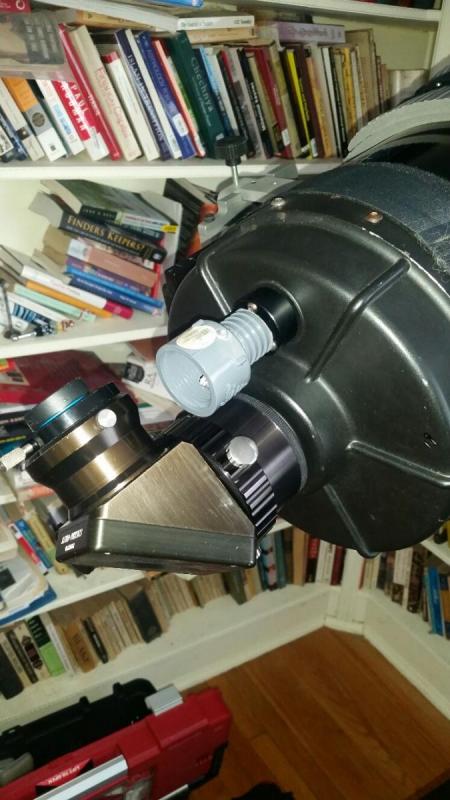 I was thinking about internally adding a low speed 100mm fan to breakup thermal plumes that I can sometimes see. Not sure it will be effective though.

YAOG, I know your post is almost a year old, but a 100mm fan is way more than you need.  I installed two 60mm fans in my C11.  Before observing I ran both fans, with the exhaust exiting the primary baffle, where the diagonal would be installed.  Thus the air flow was across the back of the primary mirror, around the mirror (between the OD of the mirror and the ID of the tube), up the length of the OTA and finally down the baffle and out of the scope.  It did a pretty good job of keeping hot air flushed out of the scope.  If I needed a fan while observing, I ran one fan and the other served as the exhaust vent.  That was plenty of air movement.

So, turns out to be that there are no skilled amateur optical specialists who can make schmidt corrector plates from scratch.

That made me laugh out loud.

Change in subject:   I'm one of those the flocked my OTA and didn't notice any difference when observing.  I didn't consider the exercise a complete waste of time, though: my OTA looked cool.  It was so black inside and the glass looked so bright in comparison.  What I did not do was flock the inside of the primary baffle.  I was worried about vignetting but never did the research to find out if a flocked baffle would still be larger in diameter than the field stop of my largest eye piece.

The optics of my C14 Edge are probably better than my seeing conditions ever allow. If I had to improve something it would be the mechanics, ie, focusing and keeping the collimation the same for all ponts in the sky. This would allow me to take advantage of the optics I have.

The optics of my C14 Edge are probably better than my seeing conditions ever allow. If I had to improve something it would be the mechanics, ie, focusing and keeping the collimation the same for all ponts in the sky. This would allow me to take advantage of the optics I have.

An after-market focuser might fix those problems.  I bought a MoonLite Crayford focuser for my C11.  Once I got the primary mirror positioned such that all my eye pieces came to focus with my new MoonLite I never touched the stock focuser.  With your C14 EDGE you'd have the advantage of tightening the mirror locks, too.  From your post, that would give you a scope as good as your seeing.

An after-market focuser might fix those problems.  I bought a MoonLite Crayford focuser for my C11.  Once I got the primary mirror positioned such that all my eye pieces came to focus with my new MoonLite I never touched the stock focuser.  With your C14 EDGE you'd have the advantage of tightening the mirror locks, too.  From your post, that would give you a scope as good as your seeing.

I have a Feathertouch crayford focuser and use the C14 locks. This helps a lot, but it is not perfect for the collimation shift. Focusing though is a pleasure.

Mirror locks for a C14.   A year ago I purchased a C14 for the express purpose of using it for wide field Astro Photorgraphy.

The C14 appears to have been manufactured around 2010, based upon the rear casting matching the New (at that time) 14" Edge HD.   It had two ¼ x 20 machine screws with black knobs that appear to be for shipping purposes only.  The only way they would engage the mirror support is if the mirror was adjusted all the way to the back cover.

My friend Mike has a vertical mill and lathe in his garage for such projects. came up with a very inexpensive design that works very well.

We removed the existing bolts and enlarged the holes to accomodate a pipe thread tap to allow a brass compression fitting that is for connecting ¼" copper tubing for compressed air and possibly liquids to a tapped hole.

We determined the length of threaded rod needed to engage the threaded holes in the mirror carrier within the telescope and purchased two  ¼" x 2 ½" stainless steel allen head cap screws that are threaded for about 1" at the end of the screw.

We enlarged the ID of the fittings to accommodate the ¼" diameter of the screw.

The compression ring in the fitting needed to be free to allow the screw to pass though the fitting without the compression being compressed around the tubing and not allowing it to release the rod for adjustment.  We used a hacksaw to cut a slot in one place.

We created knobs for the nut that forced the ring to compress between the base fitting and compression hex nut.

This allows easy adustment of the fitting to tighten and release when loosened.

Overall this works very well in stablizing the mirror after focusing.  and releasing the focus lock screws to refocus.