How many objects/hour do you observe?

I guess I stay with one object until I am sure I've drained it for everything it's worth. Nothing more to see here, move on. But, since I sketch my observations, I usually limit myself to one serious observation of that sort, and visit or revisit a few others. The final sketch takes time, too. So, really I'll hit a few objects for an hour or so, then buckle down on one object for an hour, more or less. Time flies, so I really don't pay that much attention to time, but it takes about an hour to drain an image for all it's worth, in my experience. Dark adaption, finding the right magnification, relaxation, and deep observation...then throttle back and skip around the sky at some old favorites or a glimpse of a never before seen object (for a observation at a later date).

When I drive the hour to our clubs "dark site" or go on a SP at a really dark site I am likely to spend a lot of time viewing just a couple of targets (maybe 4 or 5) about an hour each. Now that I have a mount where my ES102 and C8 can be used simultaneously I spend a lot more time for for specific details from these sites. When I am at home in B6 skies I switch to EAA and depending which setup I am using I can spend 30 or 60 seconds or if I am using my 50" 4K monitor and a M43 camera I can do one subject a night and go from ZWO224 and 60mm guide scope to C8 2x barlow and see the same object on more than one night. I had started the H2500 with a Slooh subscription but was not satisfied with the amount of time I could spend on a subject.

Sometimes in the middle of a session at home or at a darksite If I can use my phone as a hub, I'll go here: and see what the current research on the object is. I had almost give up on visual because when I went to a dark site I wanted to see as much as I could because home was "done that, seen that". Now with EAA at home I feel I can spend the time visually on subjects at the dark site but know that what I don't see at the dark site I can see at home.

To Paraphrase a song "viewing is not a victory march, Hallelujah"

I probably observe 3 to 5 an hour when I'm in my back yard by myself with some talk radio going. I dont use GoTo because I know the sky well, so my observing is generally very quiet and peaceful with my two cats coming around and sitting with me in the dark.

I am after all in their back yard once the night comes, so they like to join me and that also adds to not having a large number of objects i get in, in an hr.

The key is just to enjoy your time and not rush. Smell the roses and enjoy the reason we love this hobby so much.

It takes about an hour to drain an image for all it's worth, in my experience.

That depends on the object. Something really complex, like M8, M42, or the Veil, takes a full night for an overview and then multiple sessions to fill in the details. Or so I've been told -- every time I envision sketching M42 I give up in despair before I even start.

But an hour might suffice for a typical NGC galaxy.

Yes, great point, Tony. I was referring to NGC galaxies specifically as an object generally. There is something to see, but it takes a while to be sure we've seen it. Yes, usually about an hour in a modest aperture just to see what comparatively little we can see. I sketch them as a visual record of observation.

I feel you on brighter more complex objects. Messier 42 is a good example. It's difficult to sketch such detail in detail. So much to see, maybe too much. I sketched it once through a 6" in a yellow zone. Not sure I'd try it through an 8" in a green zone. That'd be a work of art, I'm no artist and it would take a while. Maybe it's not a bad thing, though.

Good point. It varies. My input is related to time required to gather detail for sketching simpler objects. So, an hour is normal for me on a single object.

About 35 minutes for this one: 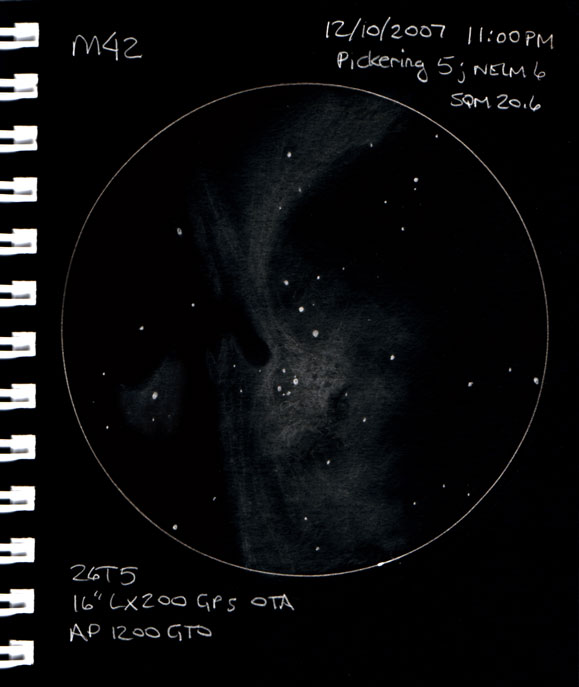 How could you possibly sketch something so detailed the details have details with details inside them?

This is the best sketch of the central region in M42.43 I've ever seen:

No one seems to draw a sketch of the complete ring of M42, only the center region and the arches on either side.

Everything in this photo can be seen visually in a 12.5" scope:

I'm with Tony on that one--there is no humanly possible way to draw that.  I admire those that try, but no one succeeds.

Small NGC galaxies, on the other hand, can be successfully rendered and are, by many good sketchers.

I could see something like this being quite well drawn:

Ahh... the answer is sketch for yourself, not for others.  Draw the parts that take your fancy. 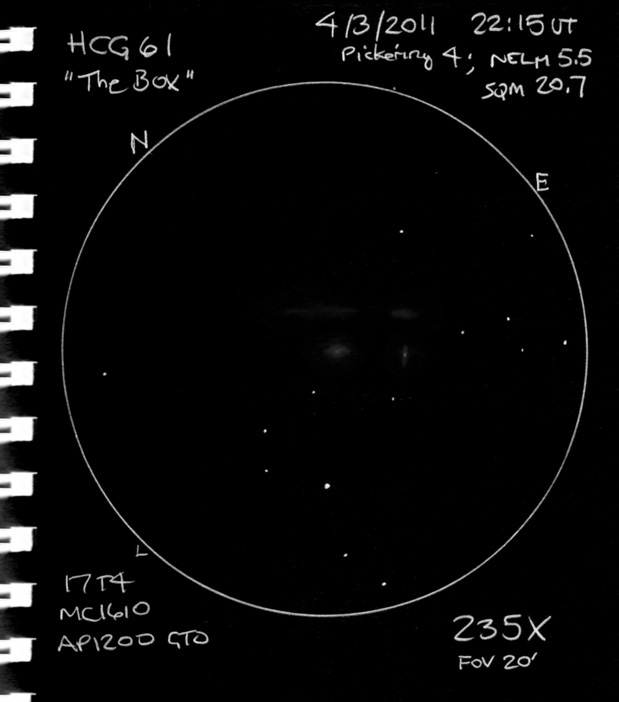 At first, I thought, "I can see those objects better with a 4"."

But then I realized there was an issue with contrast because I could only see one tiny core in the image.

So I modified the image in case anyone else has the same issue and cannot see anything in your post.

Excellent drawing, by the way.

That also made a radical difference in your M42 image:

Yeah, I've never figured out how to contrast-stretch them for different monitors.  In theory the ICC monitor profiles should help this, but they seem to be more concerned with colour fidelity than black-point.

For some reason the white-point seems more consistent even without an ICC profile, so inverting them can give a more predictable result on different monitors: 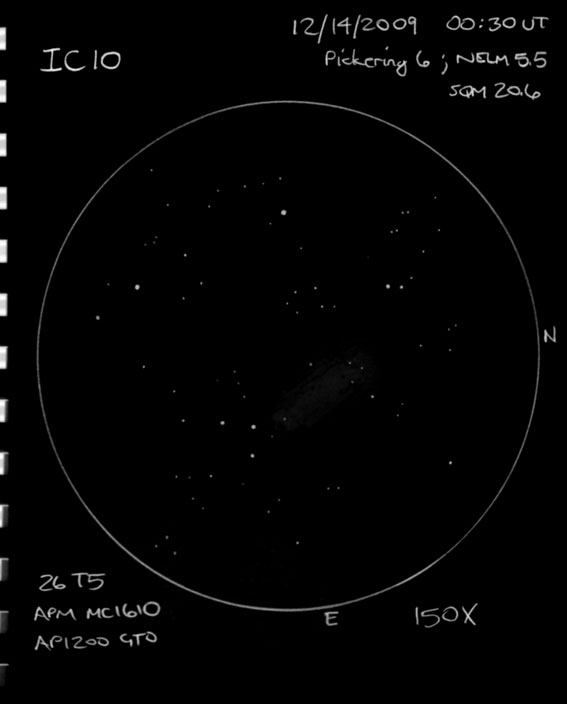 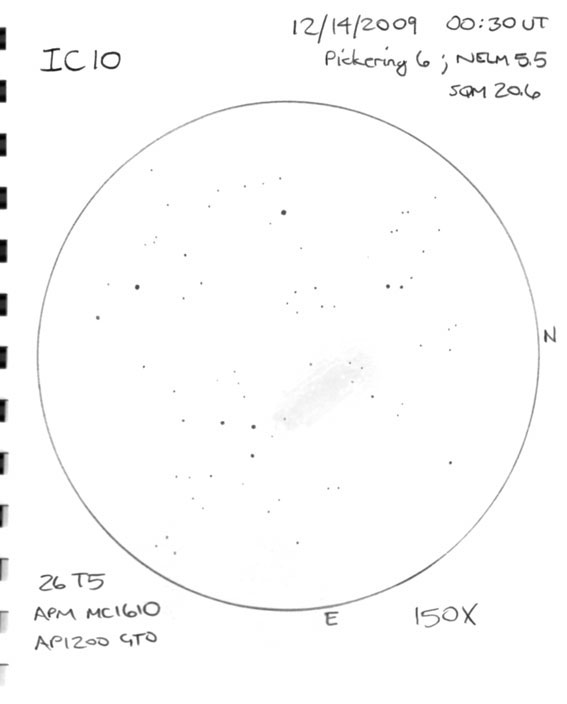 Yeah, on my monitor, the first sketch of IC 10 is all black except for stars.

On the white sketch, I can easily see the galaxy you drew.

For those of you with monitors like mine, here are Jeff's sketches side by side:

I do not remember how long this observation took, the galaxy was invisible most of the time. The star field was correct, that's all I knew. Had to wait for those very fleeting flashes and try to catch them accurately when they happened. Piece them together into a whole to figure out what we seen. We just cannot do that in 5 minutes. If I had dropped in for a quick look, I'd never know the galaxy was there. It takes a while to see something we cannot see most of the time. All I have to show for it is a core and elongated halo. 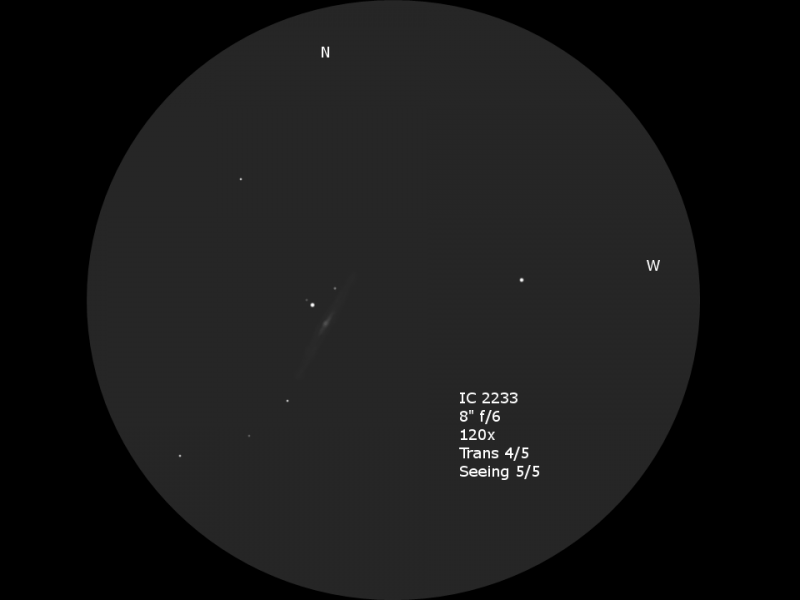 You know, M33 has always been a personal nemesis every since I first tried to see it as a kid. The first impression was so very dim I thought it was impossible. Some attempts over the years resulted in the same featureless smudge. Just way too difficult. Until one night I decided I would stare at the faint smudge for as long as it took to see something in my 6" at the time. To see anything. It is a Messier object, thus fairly bright, and other folks take about seeing stuff. So, why not attempt it, give the nemesis a good hard look to see what I was missing.

In short order, two HII regions became visible. Some variation in the soft dim glow and foreground stars began to show, as well. That's already better than previous attempts or past lack of interest in even trying. I recall being at the eyepiece (and trying others) for over two hours. Maybe more. And over two nights. Who does that? Who in their right mind stares at a faint seemingly featureless patch in the sky for over two hours? Doing so, I began to see the core as somewhat elongated, an appropriate image approximating the visual experience showed this, too. Now we're getting somewhere.

Now, let be clear, I never saw it's sprawling spiral arms in the classic sense of actually seeing them. But over time I figured out where they must be by paying close attention to very soft and hardly observed variations in brightness of that dim 'featureless' patch. After a long time working the faint patch, I finally decided where the arms must be and which way they must be spiraling away. Upon verification, I was right. The location and spiral orientation (near the core) were accurate. It's almost like seeing them without actually seeing them, if that makes sense to anyone who may understand what I mean.

So, I feel like that was a productive observation and put my life long nemesis to rest. That was just not going to happen in any less amount of time or with less effort.