Did some calcs to see how some cooled mono cameras might do for lucky imaging. Evaluated only for broadband signal-to-noise ratio.

assumed conditions: 21 mag/arcsec^2 target against a 20m sky. Scope was C9.25 at f/10 for the initial calc and the total exposure time for all was 1 hour.

The results depend on how the cameras are assessed - the following are 3 different methods.

Method 1: bolt the cameras onto the C9.25 scope and view the resulting images at native (raw) sampling scale with no resizing of the images. 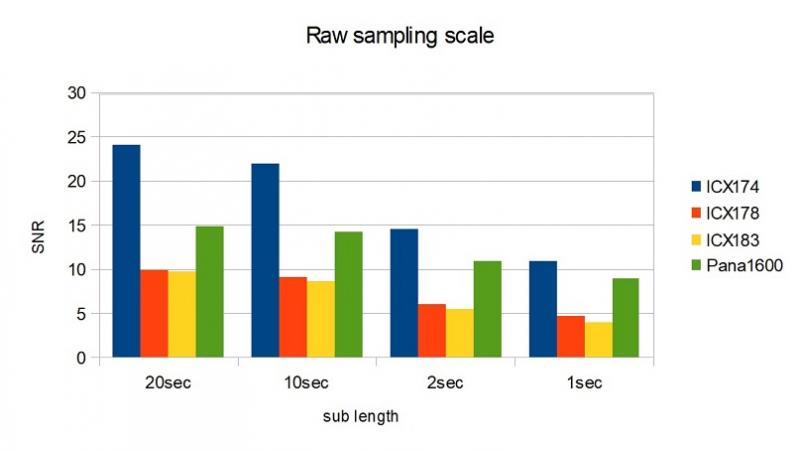 The big pixels of the 174 catch >4x as many photons as those in the the small-pixel chips, so the SNR is much better in the 174 raw images. The 1600 pixels are intermediate in size, as is the SNR. The cameras with small pixels are way down, since they collect fewer photons.

These results may explain why cameras that have theoretical advantages may not seem to perform well when they are compared with other cameras. Bolting alternative cameras onto the same telescope and then eyeballing the raw images is not an informative way to compare cameras.

Method 2: Software resample the raw images from method 1 so that the the pixel scales match (in this case, to the same scale as the 174 at about 0.5 arcseconds per pixel). The resampling algorithm is assumed to give a "partial binning" capability - eg results for 2x downsampling will match 2x2 software binning. 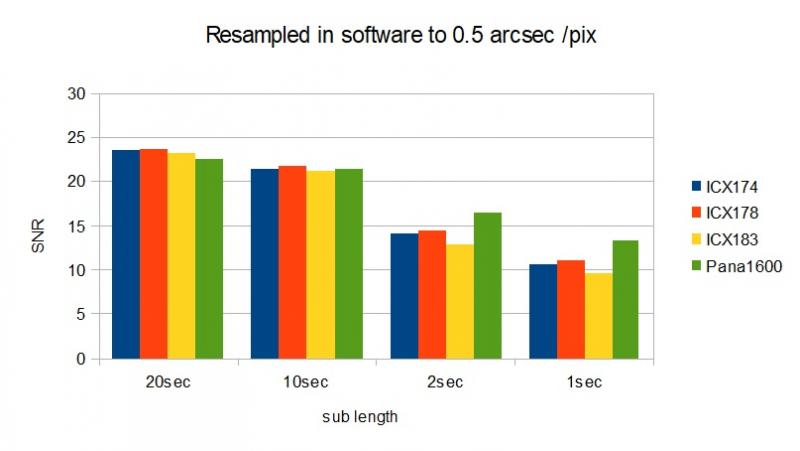 Software resampling significantly improves the SNR from the small-pixel sensors, because data from many pixels is combined into each pixel in the resampled image. This brings the small-pixel cameras back to about the same level of performance as the 174. 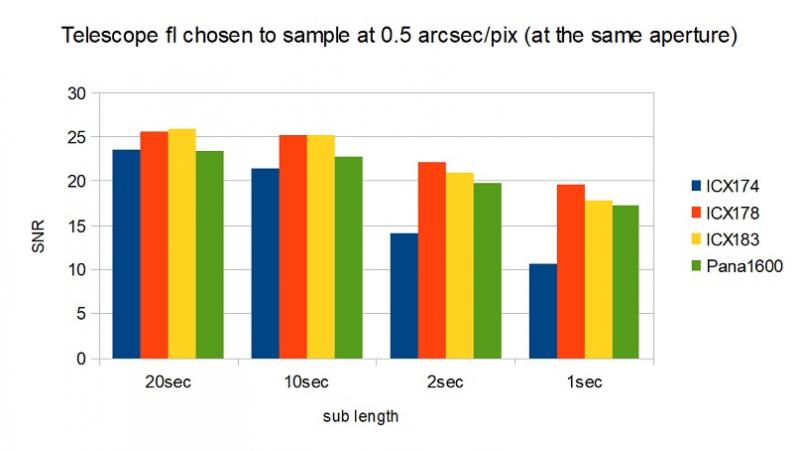 Getting the sampling right may provide an additional and very significant improvement in SNR with short subs, when compared to adjusting the sampling in software. This conclusion applies in any situation where read noise is dominant (eg it could also apply to narrowband conventional imaging with a slow scope). It is way better to adjust the sampling before detection rather than oversample and then downsample the image after detection.

Getting the sampling right is very advantageous for the small-pixel cameras and the 178 is the best of the group, The 183 and the 1600 both do relatively well, but the slightly higher read noise of the 183 causes a roll-off in performance at 1 second (and shorter). The lower QE of the 1600 works against it, but it's low read noise is helpful with short subs. The 174 is the worst performer overall, particularly with short subs - a complete reversal from the simplistic test 1.

One further consideration is that the maximum scope size will be limited by the small pixels in the 183/178. eg if the required resolution is 0.5 arcseconds, the focal length for these chips will be 1m and the biggest practical aperture will be be about a 250mm (f/4), since true binning to increase the effective pixel size is not available in CMOS (although software binning can be used with lower efficiency). Larger scopes could of course be used if finer resolution was required. However, the 174 may be used on much larger scopes for any given resolution and this may be a consideration - this possibility has not been included in the analysis, but if you happen to have a 20 inch f4, forget the small-pixel chips..

Some things to consider maybe:

- the native scale images straight off the chip (on the same scope) will look way better from the 174, even though the other chips outperform it when optical sampling is adjusted - eyeballing raw images can be a misleading way of assessing sensors .

- the 178 is clearly the best of this bunch when used with short subs and appropriate (optical) sampling - and at apertures up to about 250mm.

- for lucky imaging, software resampling (including software binning) is, at best. a halfway house between the raw images and the images you could get with proper optical sampling - it is way better to try to get the sampling right in the first place, rather than oversample and then adjust it in software..

Thanks for looking - would welcome discussion. Cheers Ray

I used the ASI figures and chose gains for all cameras that gave a well depth of 1000e. I would be surprised if the QHY was much different at that gain setting and the general conclusions should apply to either camera. Be interested to hear how you get on if you do get one.

I did the analysis while trying to decide whether to use my 1600 or get another camera for lucky imaging. Still not decided on whether to get a small-pixel camera for my 250f4 or resurrect an old 300mm f/5scope and put the 1600 on that - the 178 is probably the best solution from an SNR perspective, but the 1600 also has a lot going for it and the extra resolution of the bigger scope might be useful..

Great post, Ray. I appreciate the way you did these tests. Pairing an IMX183 with a 10" f/4 newt is something that has been on my list for a while, and it is good to see that it can perform well.

I do have one question...what were the gain settings used for each camera, and what was the effective e-/ADU and read noise? I'm assuming these were done at higher gains? Or did you choose unity for all to normalize that factor?

thanks Jon.  Looks like they should all work OK on a fast scope..

Was going to put this in, but the post got too big. The (ZWO) gains were chosen so that the well depth for each was 1000e - so that the comparison was apples with apples. They were all at high gain, in the region where the RN flattens out.   Cheers Ray

The parameters used in the model were:

QE is the estimated band average for luminance. e-/ADU is not used in the SNR calculation.