Some questions about three old Meades

I considered posting this in the Cats Forum, but these are old enough to fit the definition of 'classic', and one of them is not a Cat, so here I go.

Some of you may remember that about a year and a half ago, I asked here about a 4-inch Unitron donated to me by a nearby university to help me raise funds for our public observatory. It was not being used anymore, and they wanted it gone. I then did the same thing a few months ago with a 1960s Questar. Well, I'm back again, but this time with some scopes that are not nearly as sought after: two Meade SCTs (an 8-inch and a 10-inch) and a heavy duty Meade GEM that comes with a Franken-Newt: an 8-inch, f/8 reflector with a Parks tube and primary, and other bits from elsewhere (if I recall correctly, which I can check on). I'm going to include several photos, and I hope folks can help me with several questions.

I've never actually owned a forked SCT, let alone a Meade, so I'd like to know the proper terminology. Both the Meades are too old to have go-to mounts, so just what are they? Both say 'Quartz Drive' on them, but the 8-inch has a dual axis hand controller, with the electronics in the base. The 10-inch just has an input for a 115 volt power cord, with no wiring going toward the arms for Dec control. LX3? LX5? Something else?

The GEM is amazingly heavy, and I've seen them talked about here before, but don't know just what it's called. Did these come in more than one size, like other maker's mounts?

2. Any hints at value? I know that some folks don't like getting into that, but these are mine only in the sense that I''m going to use the funds I get for them to purchase items for our observatory. I'd like to get a fair price, but I'd also like to get these to be used again, so I'm not out to make a ton. The photos will show what they come with (wedges, finders, etc.) and that they are in okay condition, though some things might not, or will not, show up:

-- Both SCT tripods have pretty significant rust on them.

-- There is a film on the inside of the corrector plate of the 10-inch (which I'd rather not mess with). You can also see in the same photo that there is a bowed bit on a gasket.

-- We have not been able to test the control box for the 10-inch since we are missing a cord. (We do have one cord, though, and tomorrow I should be able to test the box with it, and then check the scopes's drive with it, since they both use the same cord. I only now thought of that.)

-- Both drives on the GEM work, but the control box does not: You can plug the mount directly into the wall, and it will track in RA. Or, you can plug the control box into the wall, and the mount into it, but then the Dec drive works, but the RA does not. So, we know it's the control box that has the problem. My son opened it up, and found that the RA drive has 50 volts going to it, so it's not simply a connection problem, and he wonders if that is the problem. He's much more knowledgeable about electronics than I am, but didn't want to mess with it if there is a known fix for this issue, soooo, question number...

3. Does anyone know if this is a known issue with theses control boxes, and what the solution might be; or where I might turn for an answer?

If anyone has any questions for me, I'd be glad to try to answer them! 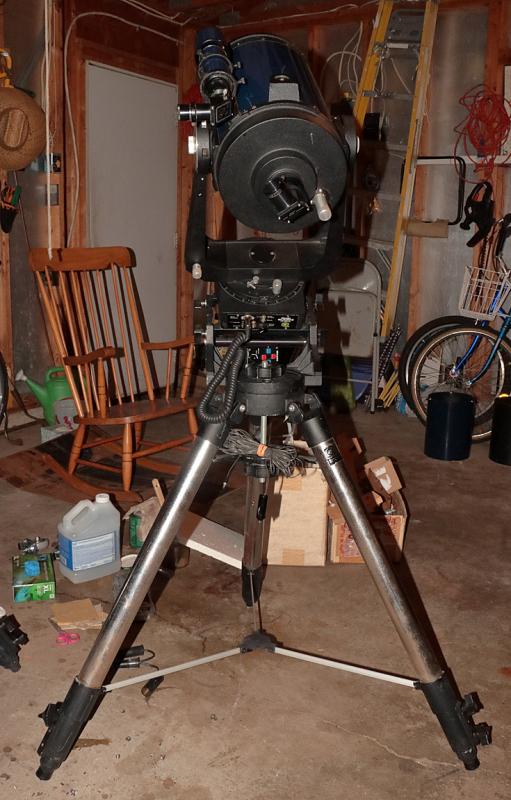 A closer shot of the controls on the 8-inch: 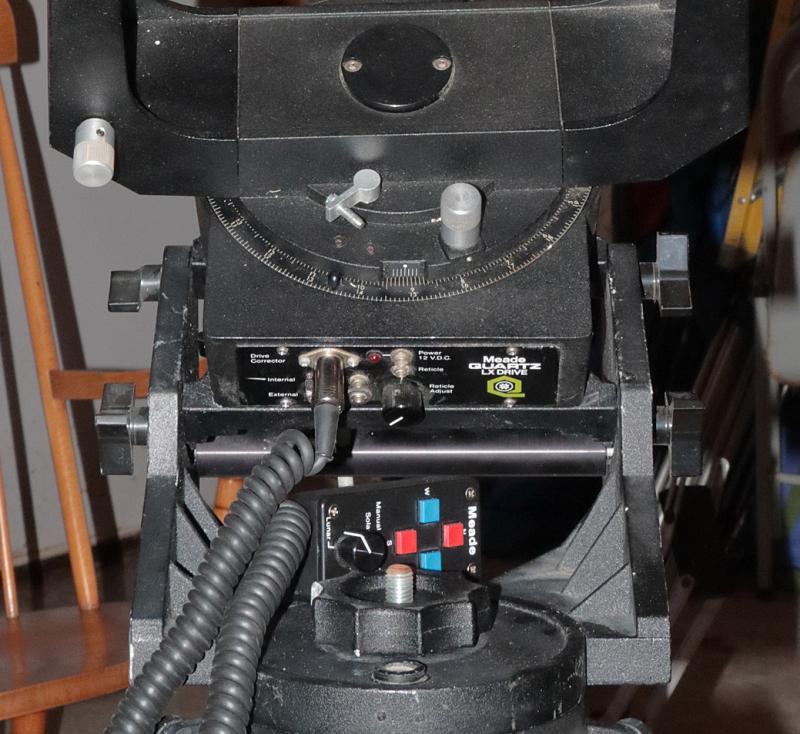 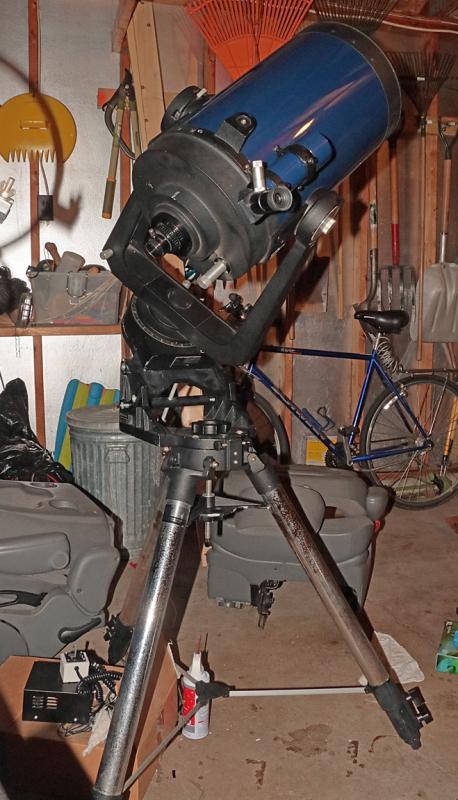 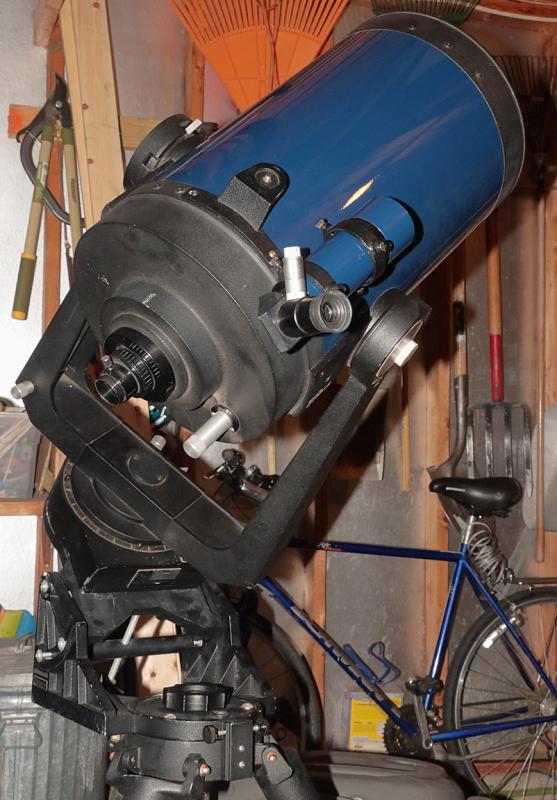 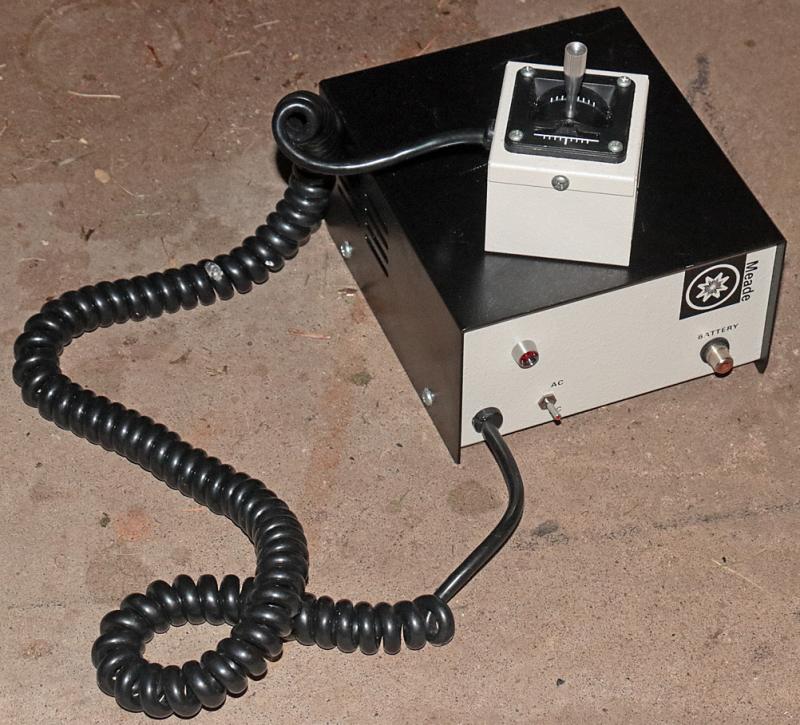 The front of the 10-inch, showing the film on its inside (which is not terrible) and the bowed gasket: 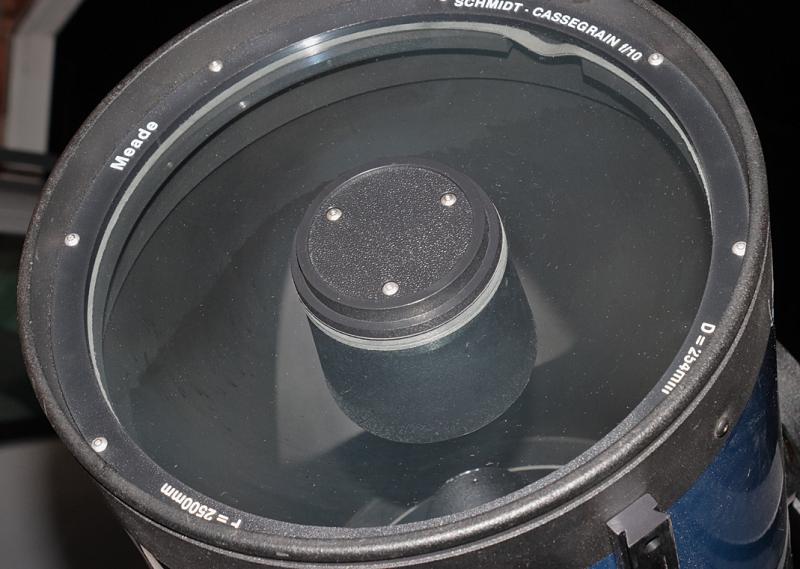 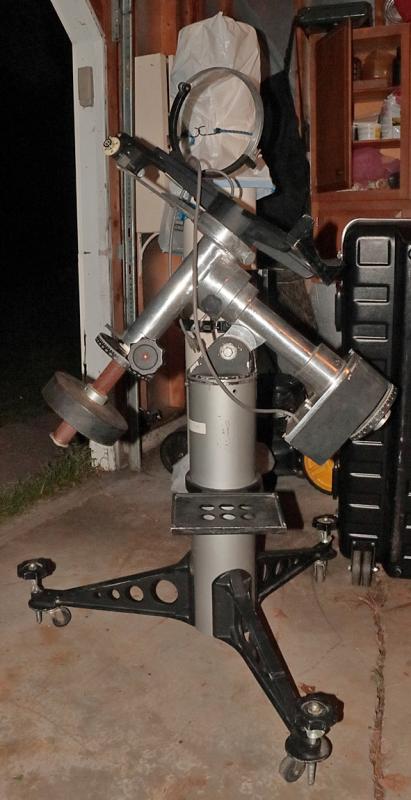 A closer shot of the GEM: 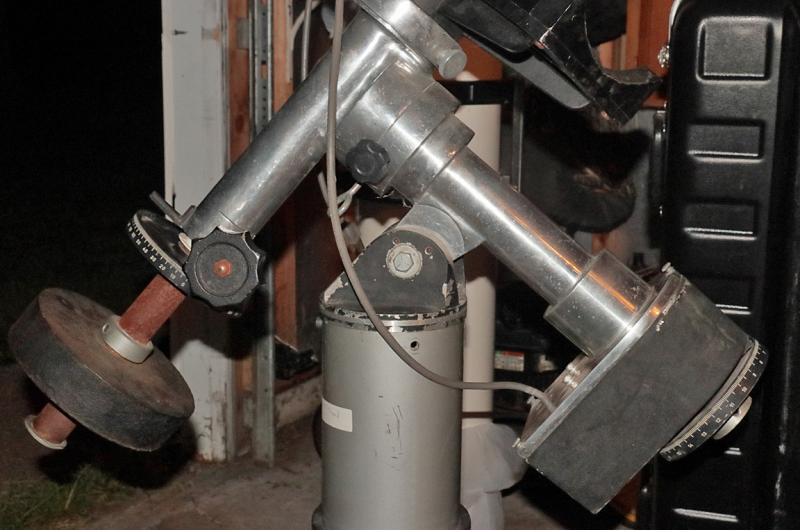 The GEM's control box and paddle: 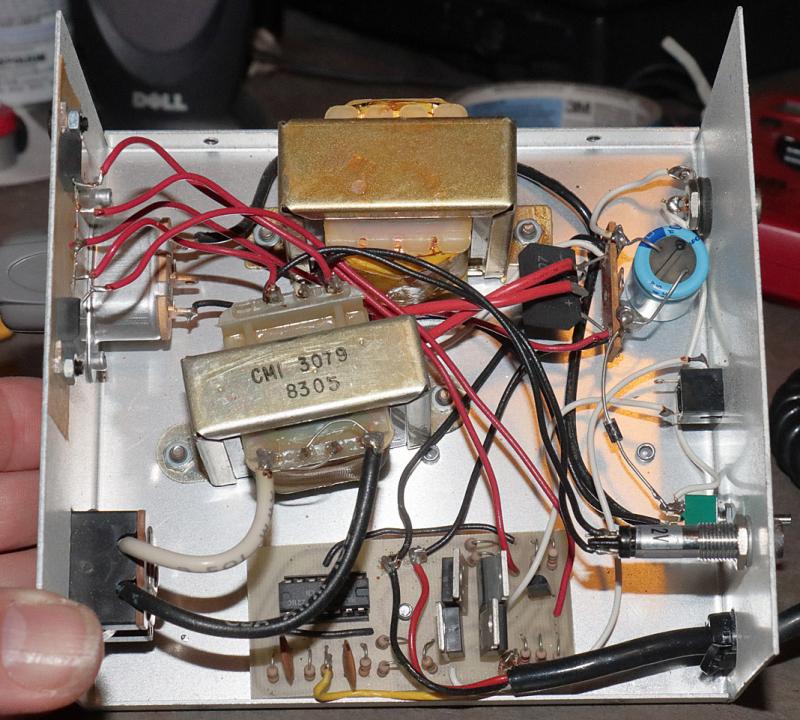 I wonder if the problem with this control box could be with the hand control 'paddle'. My son did not check that, but I think we could easily enough.

I really enjoy bringing old things back to life, but this is all very new to me. I'll be grateful for any suggestions.

When I do sell these, I'll be willing to drive a long way to get them to buyers, if they can help me pay for gas. Shipping will almost certainly not be worth the cost!

Not sure who or what made the 8" F/8 Newt, but i would pay a easy $800 for it with the Meade RG mount if it was local.  Most would never pay that much but since i live in a state with no telescopes i always have to pay more for something i want.  Best thing to do is slap them up for sale and see what offers you get.

Looks like that went with the Meade RG EQ mount.

Although rusty, those tripods are definitely worth cleaning up.  The Meade Field Tripod is a rock solid tripod.  I use one for my C8.  A little of  your favorite rust remover should do the trick (naval jelly, Evaporust, NevrDull).

I concur with others that the GEM is a Meade Research Grade mount.  Coupled with the Parks OTA, that should be a nice scope that should be easy enough to find a buyer.

Thanks for all the comments and help! Here are some answers to questions:

-- I've never been quite sure what 'shaft diameter' referred to with certain mounts, but I'll include another photo with measurements labeled, for both the shafts (2.5 inches) and the pier (6 inches). 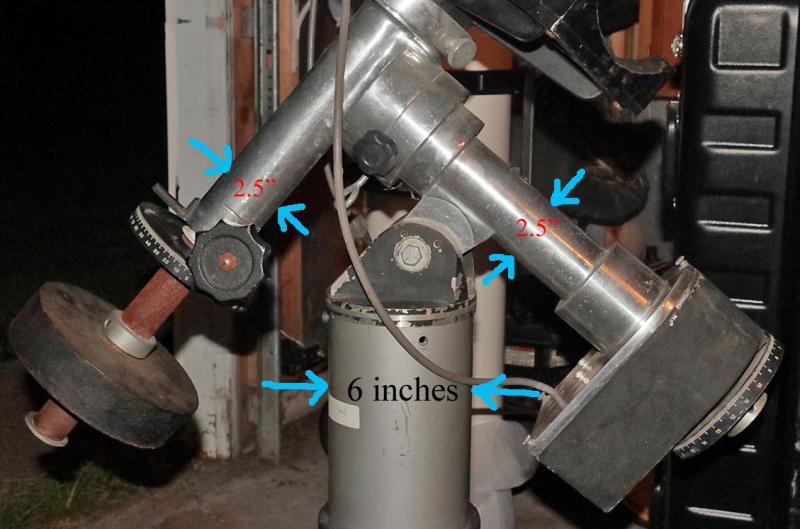 Chas: Yeah, shipping any of this stuff to Florida -- or anywhere, really! -- would be insanely expensive. My ideal is to sell each of the three telescope/ mount packages as complete packages, either to someone not too far away (not very likely), or to someone willing to meet me halfway who is willing to give me some compensation for gas if it's more than a couple of hundred miles. I'd be willing to drive a long way, since I like driving, and I like the idea of selling to someone who wants one or more of these to refurbish, or just as they are. They worked for the university for decades, and once I get the basics done on them, the will work as they are.

Did you ask for these for some kind of records you are keeping, or can they be used to find out more about the scopes? I'd be grateful for any information!

I agree with you about the combination of the Research Grade mount and the 8-inch f/8. I have some work to do to get this kit working properly (the 8-inch Meade seems to be complete and working fine, and the 10-inch probably does; we just need another cord to check it.) The mount is missing some bolts and a knob or two, and the primary mirror on the scope is either dirty, losing its coating, or both (though it looks usable as is, so I may not mess with it. The fiberglass tube was obviously modified at some point: there are unoccupied holes in it; some where the spider was moved for some reason to a new location, and others in a line along the tube's length. I wonder if tube-balancing counterweights used to be mounted on these.

Here are some photos:

Maybe the spider was moved to accommodate this 2-inch focuser? Is it a recognizable model? 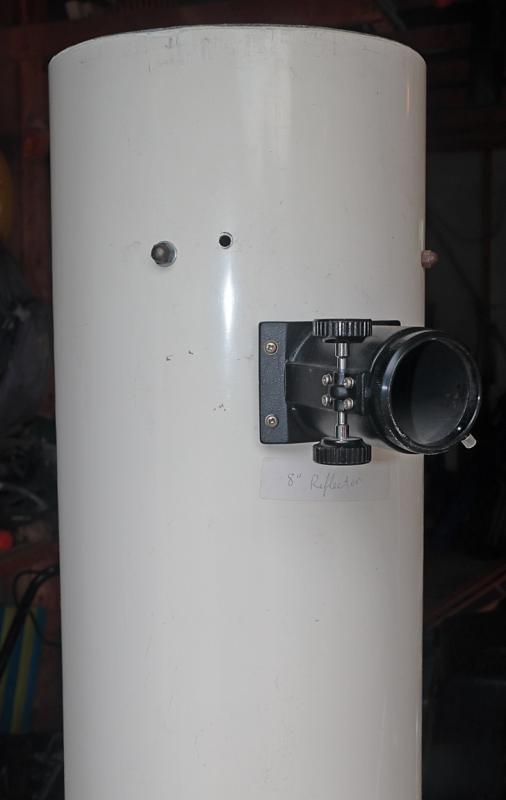 Here's a shot looking down the tube at the cloudy mirror. It looks worse in the photo than in reality. 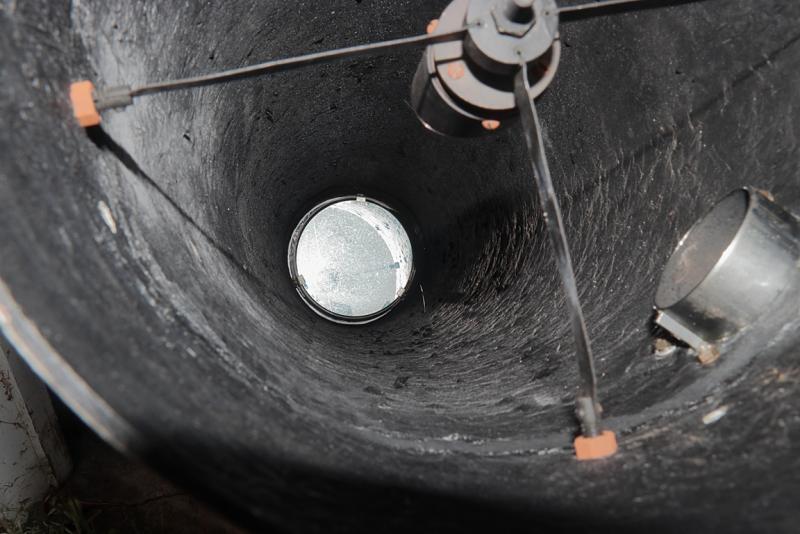 A different exposure time, to shoe the mirror more clearly: 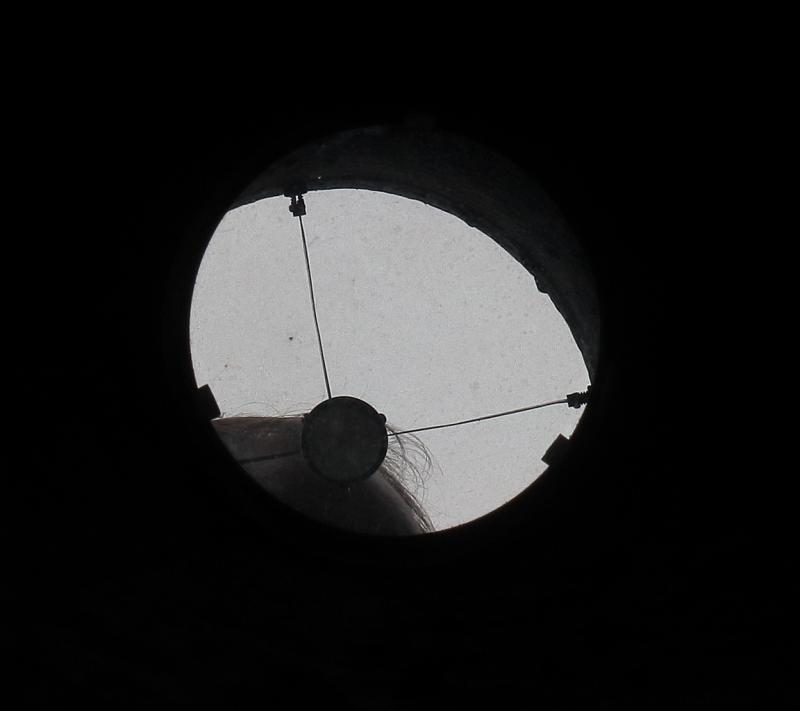 A wider look at the spider end (that secondary on this long scope looks so tiny compared to my 10 and 14-inch f/4.5s!): 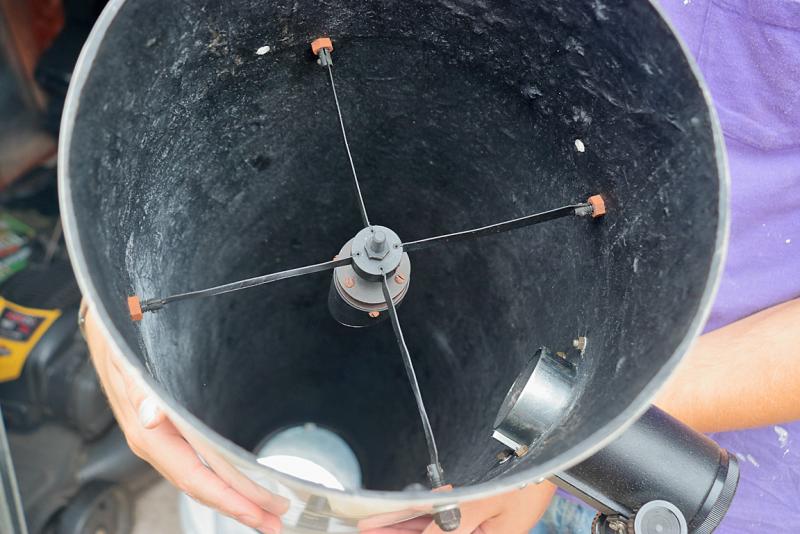 I'll be back soon with a shot of the back of the mirror!

Chas: Yeah, shipping any of this stuff to Florida -- or anywhere, really! -- would be insanely expensive. My ideal is to sell each of the three telescope/ mount packages as complete packages, either to someone not too far away (not very likely), or to someone willing to meet me halfway who is willing to give me some compensation for gas if it's more than a couple of hundred miles. I'd be willing to drive a long way, since I like driving, and I like the idea of selling to someone who wants one or more of these to refurbish, or just as they are. They worked for the university for decades, and once I get the basics done on them, the will work as they are.

I know it would cost more than i would want to pay. This is why i never get many deals as shipping cost makes a good deal not a good deal and in Florida there are never any classic scopes for sale. I am sure you can sell that RG mount for a easy $300 to someone local or close to you.