Last night was about my 10th try to find that little bugger hanging out in the diffraction ring.  I had tried repeatedly and without success with my 120mm ED.  I've tried before with my 8", even on an EQ platform a few nights ago.  This time I managed to see it with the 8" at an ungodly 498x without the EQ, so constant nudging and then allowing it to drift (if the drifting was near rapids) .  I would call it my "great white whale", but it's more like a tiny white pimple.

You'd expect the 8" should easily split it, if I could just get improved seeing.

I think I first bagged this one in 2016 in my 128mm refractor (notes say it was "surprisingly easy at 345x"). It's getting easier. And very good seeing is essential.

My respect to the two of you.Great obs!! 1.3" sep and mag 2.95 and 5.4 this is a real challanger. ( according to "stelle doppie") I must have tried it almost 10X with my scopes. See below!With no success. This little devil frustrates me!!
Have you observed 10 Aries? How much easier is it than Zeta Her?

All the best,
Magnus 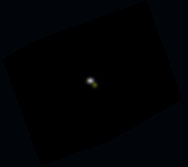 My view mimicked your photo except that both A & B were a bit brighter and a little more active as they scooted through the fov. I have not tried 10 Aries.  One positive about Zeta Herculis is that it is well placed at 10 pm this time of year.

Well, I confirmed my sighting of Zeta Herculis las night. Same instrument, equal or better seeing and this time on my EQ Platform. Despite not getting my platform aligned perfectly on Polaris because it was blocked by my house, I still managed enough accuracy so that, while it drifted through the EP, it wasn’t like the prior night. Still a tough split at 498x in my typical seeing. I salute those of you who are splitting it below 140mm.

Chesterguy, congratulations on splitting Z Her.  In this game it pays to be persistent.

My most recent attempt was in late June with my 130 apo. It was a full moon night with average seeing for my area (P5) and Zeta Her was directly overhead.  I saw a close split at 234x with the spurious disks just touching in steady moments...a neat snowman pair.

I just tried to observe (split is the wrong word) this star with my 4 inch refractor. The observation was at the very limit. At 220x I saw a tiny deformation of the airy disc in the right direction.

Here is my picture from Zëta Herculis with my LZOS 6inchs F8 APO refractor with a barlow TV 3X and ASI 224MC camera.

More information and pictures on the capture here (sorry it's in french):

I observed this double with the 8" reflector twice in recent days:

314x:  when seeing permits, the yellowish secondary is seen sitting atop the primary

I did a few Aberrator simulations for the expected view using either my 8" or 15" reflectors; these are shown below. 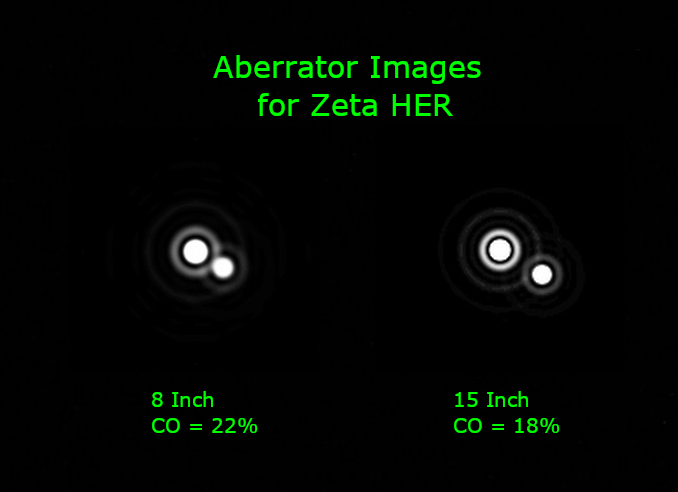 The 8" inch simulation is fairly close to what I saw.  The 15" simulation shows the secondary now sitting near the second diffraction ring.  In some images I obtained recently with the 15" and an ASI 290MM camera this is pretty much what I saw.  In the composite image below the first diffraction ring appears as a fuzzy halo while second ring got washed out a bit in processing. 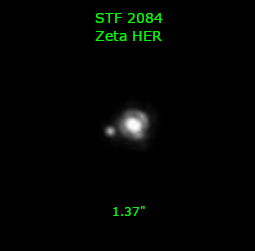 I can agree with the Zeta Herculis at last sentiment at the start of this thread. Encouraged by the posts here on Cloudy Nights and advice from John Huntly I have at last seen Zeta Herculis on two separate nights from here in the UK. On both nights the telescope used was a TMB 130mm f9.2 Apo-refractor.

First time was on the 21st July 2020 with a Tak prism diagonal and a 4mm Circle V Ortho for about x300. Secondary appeared as a very condensed yellowish oval sitting on the first diffraction ring at about the right position angle relative to a white primary.

With the 9mm Morpheus I was surprised to very occasionally a tiny white fleck at about the right position, a convincing observation. With the 8mm Brandon the same flick appeared as a definite tiny point like a white LED flashing on and off.

With the 5mm Tak LE the same position of the previously seen fleck became a definite faint yellowish condensed part of the first diffraction ring very similar to the view with the 4mm Ortho back in July.

With the barlowed 8mm Brandon the secondary managed to be definite small disk on the first diffraction ring, very similar to a sketch that John Huntly was kind enough to send me.

There have been of course been many failures

I split is on a regular basis with my 120 Eon, doable but difficult.  With my Dobs, it's pretty straightforward if they are cooled.

A few years ago I had my first 120mm Eon and a Orion 127 Starmax.  I was able to make the split on a regular basis with the Eon, I never made it with the Starmax.

One night I decided to really give the 127 mm (actually 120mm) Mak it's best chance.  I set the scope out for 2 hours before beginning the observation. Zeta Herc was well positioned.  I just couldn't make the split.

In frustration, I got out the 120mm Eon and was immediately made the split even though the scope was cooling.  I quickly made a 40% CO for the refractor and while there was some loss of crispness, it still made the split. It wasn't the CO..

Not long after that, I gave the Starmax to someone.

I have VERY rarely split Zeta Her, due to the generally poor seeing in the Boston Mountains here.

Zeta Herculis is on my bucket list. I have not had good luck, the last three viewing session's, being able to get a clean split. I know that persistence will pay off in the end!

Last night I had both scopes on the mount (AZ100 Rowan) side by side. Seeing was pretty good for the UK. Looked at zeta herc near the end of the session when both scopes completely TE. With my shortest FL eyepiece, a 4mm Delite in the TSA120 (225x) I could see it quite easily sitting on the first diff ring at E.
I thought I’d see how it looks in the Mewlon 210 with the same EP at 600x and was amazed...large and crystal clear split with the secondary an almost perfect little disk

I meant thermally equilibrated and East....sorry about that!
Yes, a good pair of scopes, thanks. I’m very lucky but I’ve made great sacrifices to get them! I’m looking for a high quality shorter focal length eyepiece for the TSA, 225x is no challenge for it. I reckon it would handle 400x in decent seeing. Maybe a 2.4mm Vixen HR if I can find one, but I’m open to other suggestions.

By the way, my name is John. The silly username is just something I always found funny from an old Carry On film 😂

Clear skies to you my friend

I didn’t see your post until I’d posted mine...same thing of course!
🙂

John (aka Rodger) - noticing your comment on the Vixen HR eyepieces, no doubt very fine optics to judge by the reviews, an alternative is using a top-quality Barlow or similar with excellent eyepieces of longer focal length, greater eye relief, and wider field. For years I've had a Televue 2x Barlow and 2.5x Powermate, and in terms of optical quality on doubles they don't have any negative effects that I can detect. And I'm very picky about optics.

Your 4mm Delite would give 450x with the TSA 120; and maintain a 62-degree afov, compared to the Vixen by itself with 42-degree afov; the Delite has long eye relief, the Vixen 10mm, that's fairly tight. A 2x long barlow also can extend eye relief slightly. The Delite eyepieces are as good for sharpness, contrast, lack of scatter, and clarity of image as any I've seen.

It's worth checking some numbers on the various possibilities. And the Barlow is usable with any 1.25" barrel eyepiece.