This is probably a new topic but I don't know how to start a new thread.  Help, anyone?

Who was your first ATM mentor?

Mine was a very unusual man, completely self-taught about mirror making and astronomy.  He was Ernie Brendel, a middle aged farmer in Madison county New York, about an hour from Syracuse.  I met him when I was 13, in 1956, also living on a farm nearby in a very rural area.  I am not sure if he had ever gone to high school.  He became interested in astronomy and decided to make a telescope.  He had almost no knowledge of what had gone before him and did not realize that there were commercial kits for mirror making, like from Edmund. Or books and magazines that would have been useful.  He read somewhere that you could make a curved mirror by grinding two pieces of glass together.  So he wrote to Corning and asked if they could make him two round pieces of glass about 4 inches in diameter and ½ inch thick.  That eventually became his first telescope.  He later reused those blanks and I have them now.  Not actually that round.
He read that Foucault made mirrors by grinding them together with an abrasive, but it did not say what the abrasive was.  By lots of trial and error he eventually discovered the solution and also the idea of going to progressively finer grades of it.  This self-taught process took years and he plugged away at it as a hobby.  Farmers usually have little time for hobbies.

Eventually he made a 6 inch parabolic mirror and mastered the knife edge test.  He claims that over the years he made every mistake possible.  When I met him he was working on a 10 inch mirror and he said he thought it might be beyond his abilities.  By that time he knew about Edmund kits and suggested I get the 6 inch one and that he would help me with it.  When it finally came in the mail I could not contain my 13 year old excitement and quickly ran through all the different stages of mirror making in just a very few days, all by myself.   I then proudly showed him my final result – a 6 inch mirror where the outer one inch was only partially ground and polished.  But I couldn’t wait to get it aluminized and use it.  So that’s what we did.  He wisely made no comment about the quality of my work.
Ernie was also a rock hound and collected all kinds of mineral samples, which he showed me.  We met at his place several times, not a lot, and he was such a big inspiration to me to go into optics as a profession, which I have been doing as a lens designer for the last 54 years now.   One big regret I have is that I did not ever go back and check in with him when I was an optics major at the University of Rochester, and tell him how much he had inspired me.  At the time I was not aware of it but later I realized that he had been dying for someone like me to come into his life.  He was a small time farmer in a remote area with almost no education but a passion for astronomy and telescopes and absolutely nobody to share that with.  As a self-absorbed 13 and 14 year old I did not realize that I was just as important to him as he was to me.  My takeaway now from this experience is how a mentor can change someone’s life, mainly by example and generosity more than any actual information transferred.
I have tried to be a mentor professionally to young lens designers whenever possible.  Thank you Ernie for your great example.

Yes, Echo was very bright! It (Echo 1A, 1960) was a massive 'balloon' satellite or satelloon,  100 feet in diameter. It's highly reflective surface was used to reflect microwave signals for telephone communication and radio and television broadcast. It was basically our first civil communications. Echo 2 (1964) was even bigger and was used for radar telemetry geodesy to more accurately determine the figure of the Earth.

Telstar (1, 1962) was the first in a series of second generation Telstar communications satellites operated by AT&T and RCA.

Watching satellites was a lot of fun in the 60s. I showed one to my father once and he couldn't believe it. Eventually I was able to convince him that what looked like a moving star was indeed a satellite. After that I had to call him every time I saw one. BTW, I still have that original Telstar vinyl record.

The tune Telstar. It was a big hit. I had it too! On a 45rpm. Click the link I posted above to listen to it.

It's the tune Telstar by the Ventures plus Lonely Bull, Percolator, Tequila etc. The record does have a reference to space. Here's an image of the upper part. I was playing it the other day. The image strays a bit off topic but it's in reference to the Telstar satellite. Those who started on or love for space and astronomy in that era selected tunes accordingly.

Yes, several American bands later covered it. The song was originally done by the British group the Tornadoes and released in 1962. That was the version I had. I remember seeing them perform it on TV back then; maybe on Ed Sullivan?

Telstar" is a 1962 instrumental written and produced by Joe Meek for the English band the Tornados.[2] The track reached number 1 on the U.S. Billboard Hot 100 in December 1962 (the second British recording to reach number 1 on that chart in the year, after "Stranger on the Shore" in May), and was also a number one hit in the UK Singles Chart. It was the second instrumental single to hit number 1 in 1962 on both the US and UK weekly charts.

Mine was a 45 and back then most 45s didn't have pictured covers, they came in a plain brown sleeve with a hole in it that you could read the label through.

Please try to stay a bit more focused on the topic (observing).  Thank you.

It's the tune Telstar by the Ventures plus Lonely Bull, Percolator, Tequila etc. The record does have a reference to space. Here's an image of the upper part. I was playing it the other day. The image strays a bit off topic but it's in reference to the Telstar satellite. Those who started on or love for space and astronomy in that era selected tunes accordingly.

I did not know much at all but read a lot then.  The moon was easy to find     Jupiter and Saturn took  a lot more time.  When I first found Mars  at age 7  I was so happy and proud...I told my mom and dad that I can see it at night even from the window...…. until a few days later   the red planet I discovered revealed itself to be  a radio tower. Finding real Mars became an obsession then  and it took just a short time.  Funny, the radio tower in Huntington/ Shelton was always easy to find out my window viewed from several miles away in Trumbull as it never moved....

While not living on a dark farm in New York State    southern Connecticut was indeed much darker then as Trumbull was still some farms and wooded areas and suburbs seemed to be just developing IFRC  and the Megalopolis from Washington D.C to Boston was still in its infancy...way different than what we experience today as older observers.....In the 60's and 70's  the neighbors did not seem to have lights everywhere and folks turned them off to save on their United Illuminating bill.        Today I am starting to build a portable curtain like structure on wheels to roll out like an L or  a  7 to keep on my Eastern  and South Eastern flank covered...…..or I drive up to the high level and somewhat darker  plateau of Morehouse road farm in Easton for several hours...………….keep looking up

Today I am starting to build a portable curtain like structure on wheels to roll out like an L or  a  7 to keep on my Eastern  and South Eastern flank covered...…..

Is this structure to keep light away from your telescope?

Tucked away in my copy of “Fontiers in Space”, the 1960s official publication of the Mount Wilson and Palmar Observatories, I found my old Messier Object checklist from the 1960s.  It was provided by The Optical Craftsmen, with their catalogs.

Inscribed in the margin of each listing is the date of the corresponding “A Messier Album” article, chronicled in Sky and Telescope at the time.

Those articles by John H. Mallas and Evered Kreimer, provided great insight into what to expect when observing the Messier objects.  Kreimer provided photographs taken with his 12-1/2 f4 reflector and Mallas provided sketches he made through his 4-inch f15 Unitron refractor.  Finder charts were also provided.

There was no Internet.  One had to search for information by visiting the local library.  How times have changed! 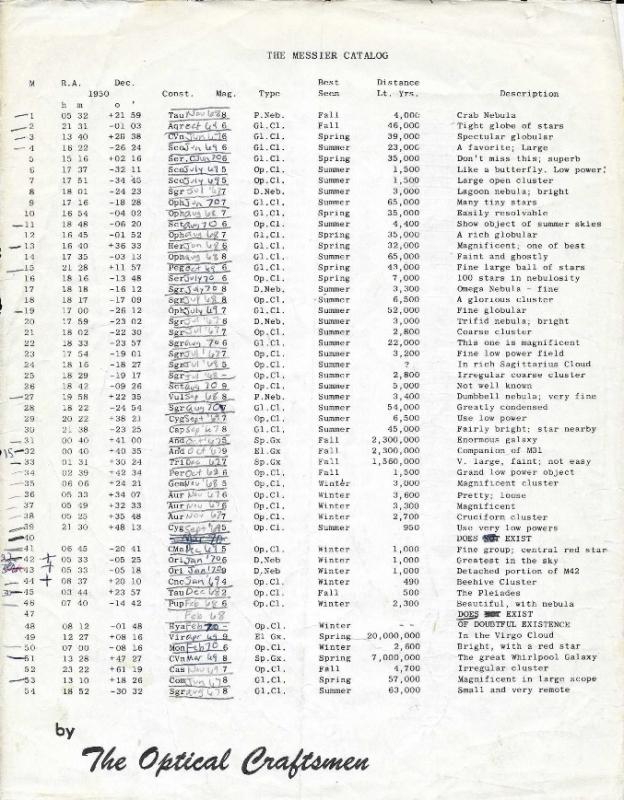 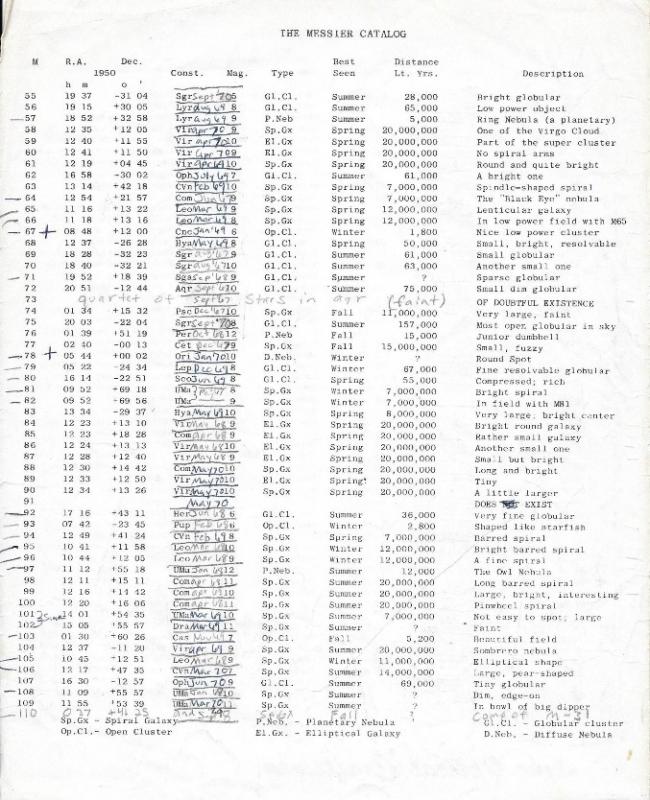 Not too distant from the 60s... In the 70s, doing astrophotography was like programming with Hollerith punch cards. You never knew what would happen immediately and you found your mistakes later. Focus, exposure times and other factors were challenges with a lot of trial and error. Most folks processed their own photos and some would push film to the limits chemically. DSLRs are way easier...

Is this structure to keep light away from your telescope?

Even the early 1980s were similar except SCTs instead of Newts and refractors and about the only dobs in wide circulation were Coulters.

I remember having to build of a list of books for the county library to hold and occasionally going up there to get what the local library didn’t have.  And they had all the back issues of Sky and Tel on microfiche with a crude ability to print on a black and white mimeograph smelling glossy paper.  It was like heaven going there!

A very useful portable item that I have on my deck is a slide projector/home movie projector screen. The kind with expandable tripod feet and a metal cylinder that holds the 4' wide pull up screen. It was $5 bucks at a yard sale. (And that screen material is extremely opaque.)

Haha...I've been using a projection screen for the last 30+ years. Works good until the wind starts blowing.
bill

There was a copy of Nortons in the observatory and two extra copies at the Centre library for members.

I keep the originals at home photocopied the maps and plastified them for field use.

I started with Norton’s too, back in 1969. I got it in a book store for about $10, and it came with one of those Messier cards. That’s what I used with my first 6” reflector. From there I graduated to Burnhams, and the. To Sky Atlas 2000 and then to Uranometria. I still have that 1969 issue of Norton’s though. I use a variety of sources now.