Almost 10 years have passed since I had opened a similar thread on our local astronomy forum. That topic being dedicated for the work with my first home made Cassegrain telescope (included the optics). So, it is some kind of nostalgic feeling for me to be able to continue that style of topic here, where I am still active. Now, my main telescope will be a DK of 170mm aperture and 4400mm nominal focal length. At this parameters. In fact, a bit longer focal length (~4500mm) in reality, with a longer photographic extension or back focus distance. For the moment, the telescope is in a provisional form.

Of course, solar system photographs taken with a Canon 550D (DSLR) in raw mode (and a 2 degrees wedge disc, as an ADC corrector, inserted at the proper distance when it's necessary)
The fist one to start this topic is Mars from October 10th, in good seeing. The red planet was just 14".4 and at 24 degrees altitude. 2200 frames stacked. 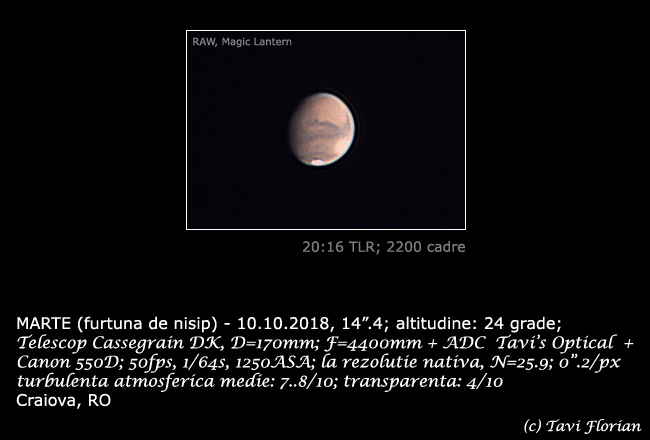 Here is the John Herschel crater, from October 20th. In average to good seeing. I still have to process a few Moon captures from the same night. This image was actually from a shortened avi (to about 50 sec), by filling the card, but it has a better percentage of good frames. 130 frames stacked (vs. the next capture of ~3 min, with 200 frames stacked, but offering about the same final result). 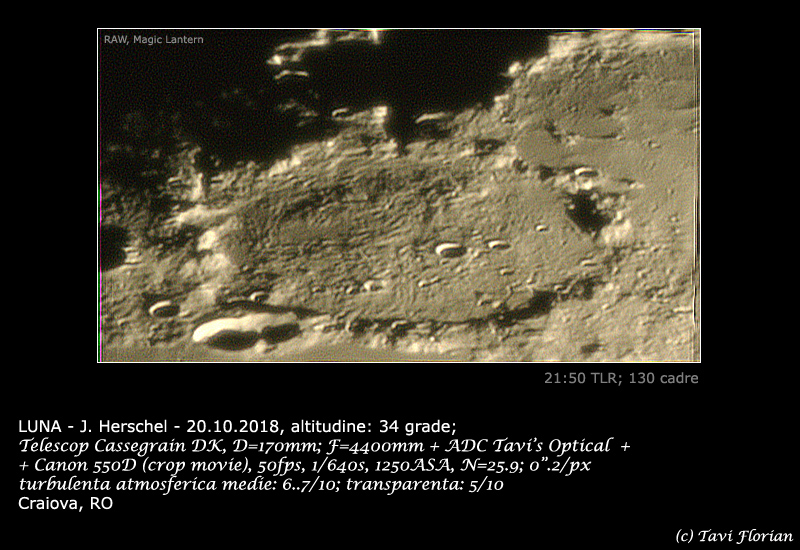 I am having quite a busy time making the singlets, but here is my martian season closer, processed ahead of its time. The capture was taken yesterday (nov. 11th), in good seeing, with moments of excellent seeing. 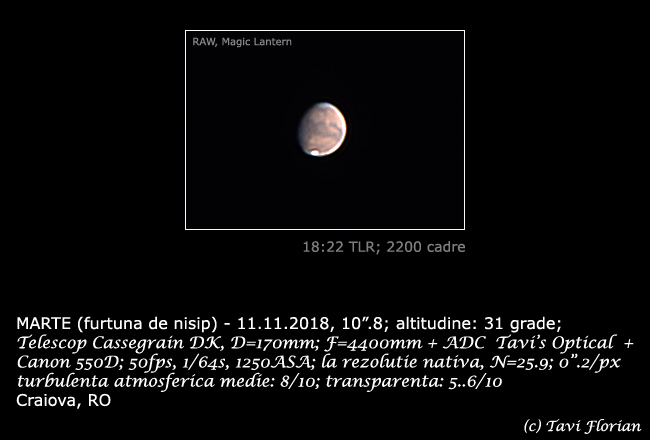 All my photos (film) using a 12.5” f/30 (D317.5mm F 9525mm) Classical Cassegrain are stored away; however, your images are impressive to say the least.  After a few irritations my optical quality was excellent and mechanically sound, but due to my astigmatism then focusing was never right so my photos were not so good.

However, my best friend and master in astrophotography could produce excellent photo with my telescope and camera.

Thanks for the appreciation! In general, my idea is to get the most out of any given aperture... with this Canon DSLR in my case.

And finally, the rest of the Moon images from October 20th. Stacks between 135 and 340 frames, with constant manual tracking. 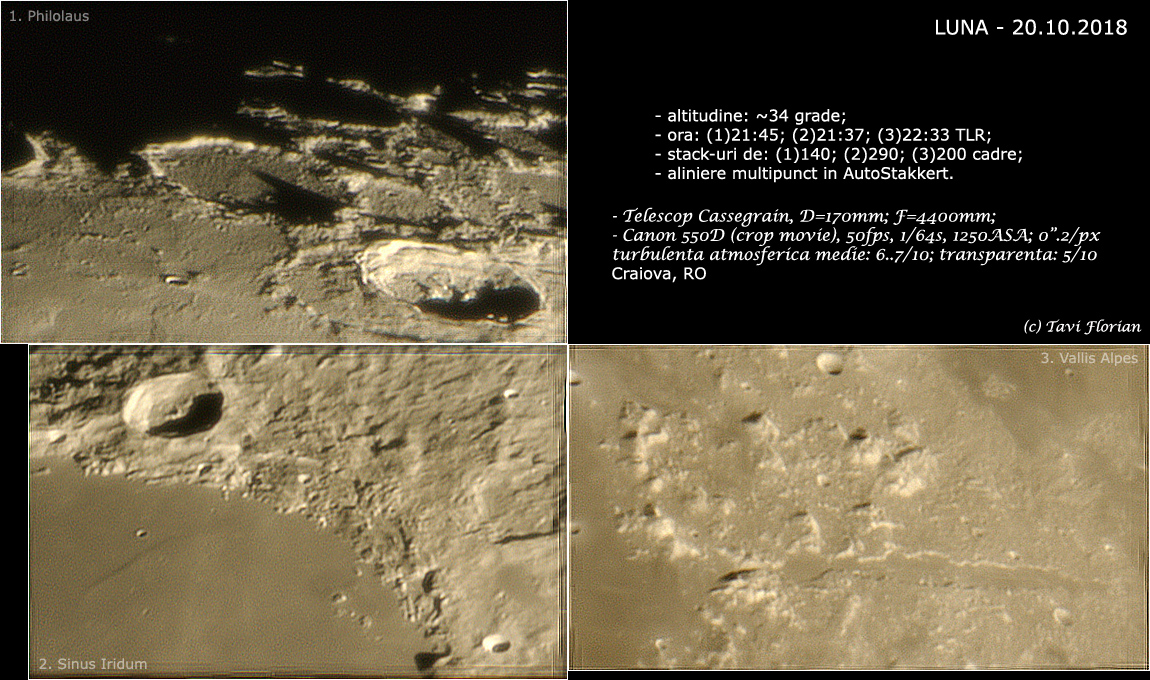 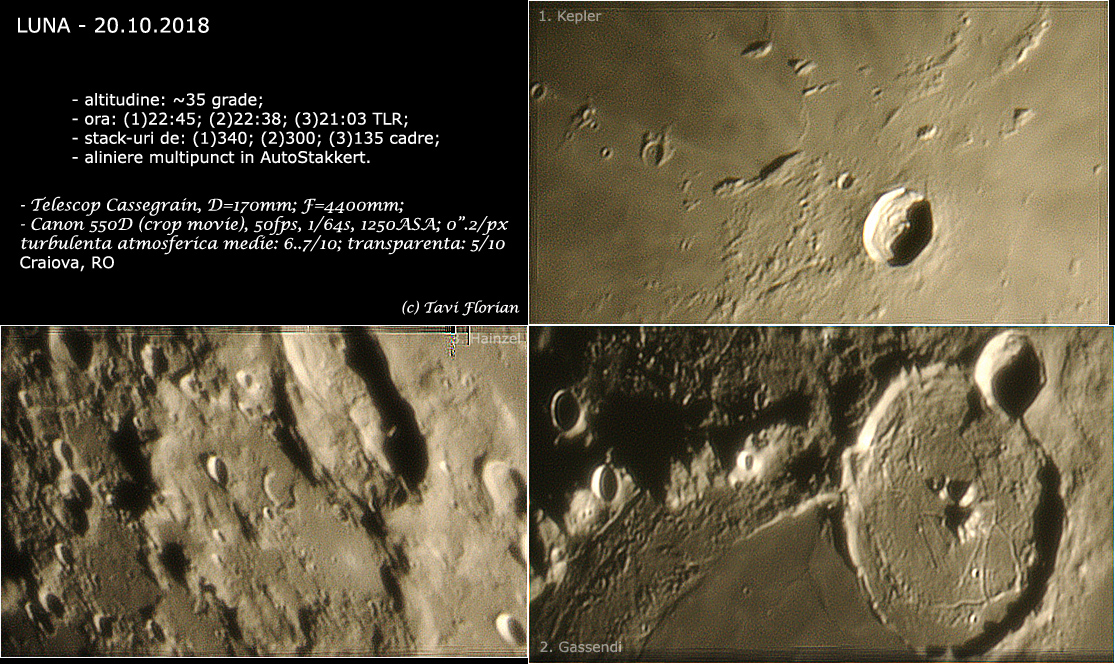 Now, I am back for good with the imaging through this D170mm aperture DK system. The focal length increasez to about 4550mm in photographic mode, due to the larger extention behind the primary mirror.

The conditions are tough for Jupiter, from my location to ~ 45 parallel. Jupiter elevation above the horizon being from 20 to 23 degrees in these captures. 2 minutes window capture. The seeing was average or a bit over average, the best so far this seson. 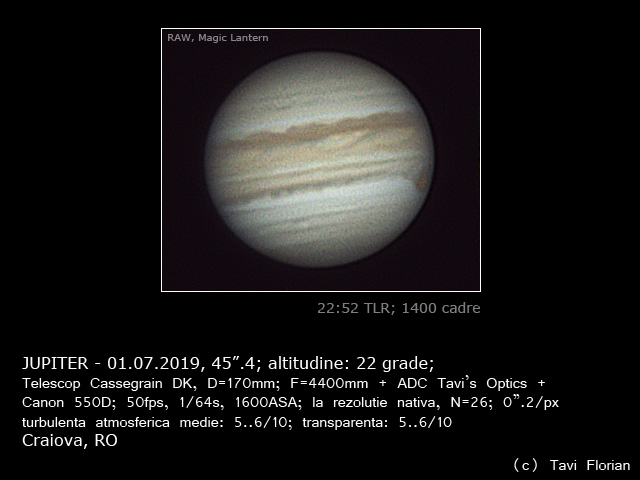 2nd of July (with Europa transit): 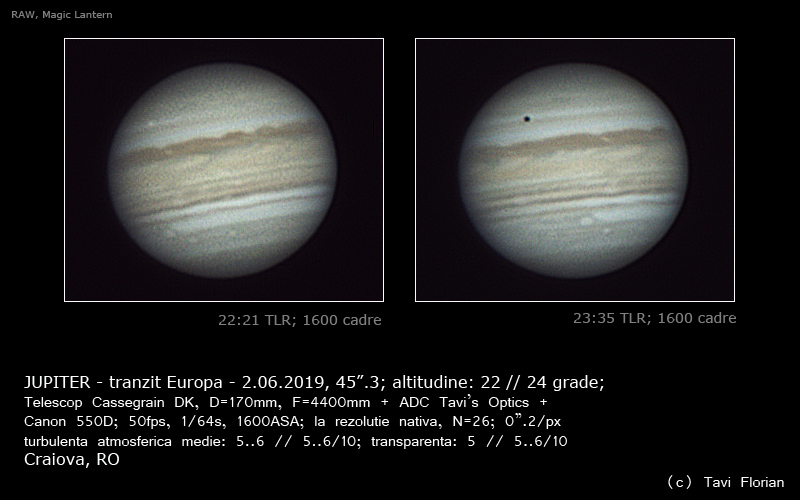 The transit of Io, from 6th to 7th - 07. For the second one, the seeing had dropped, unfortunately (at 00:13 local time, which was still a lucky window, because after that capture the seeing became useless). 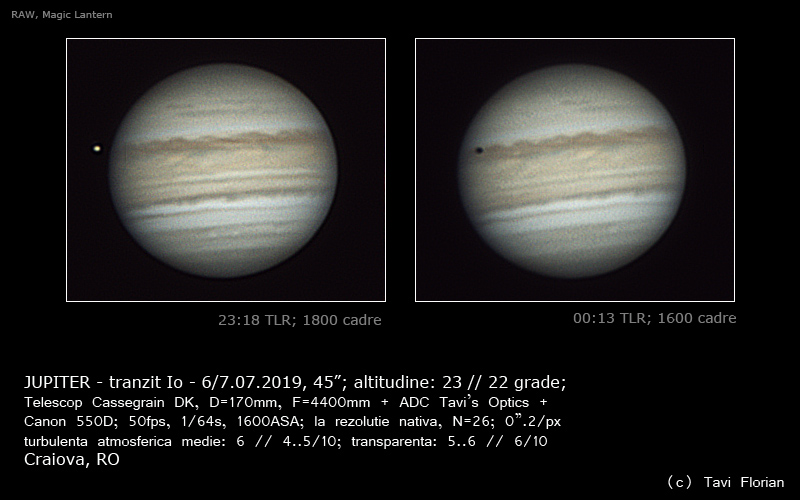 Still to come a few captures of the Moon, from the same evening.

Three regions of the Moon, from the 6th of July evening. The Moon in this phase was of course low in the sky, from 23 to 21 degrees. And a bit of twilight which was making the situation more difficult for a provisional Cass. telescope (whithout any baffle tubes). 120 to 150 frames stacked. 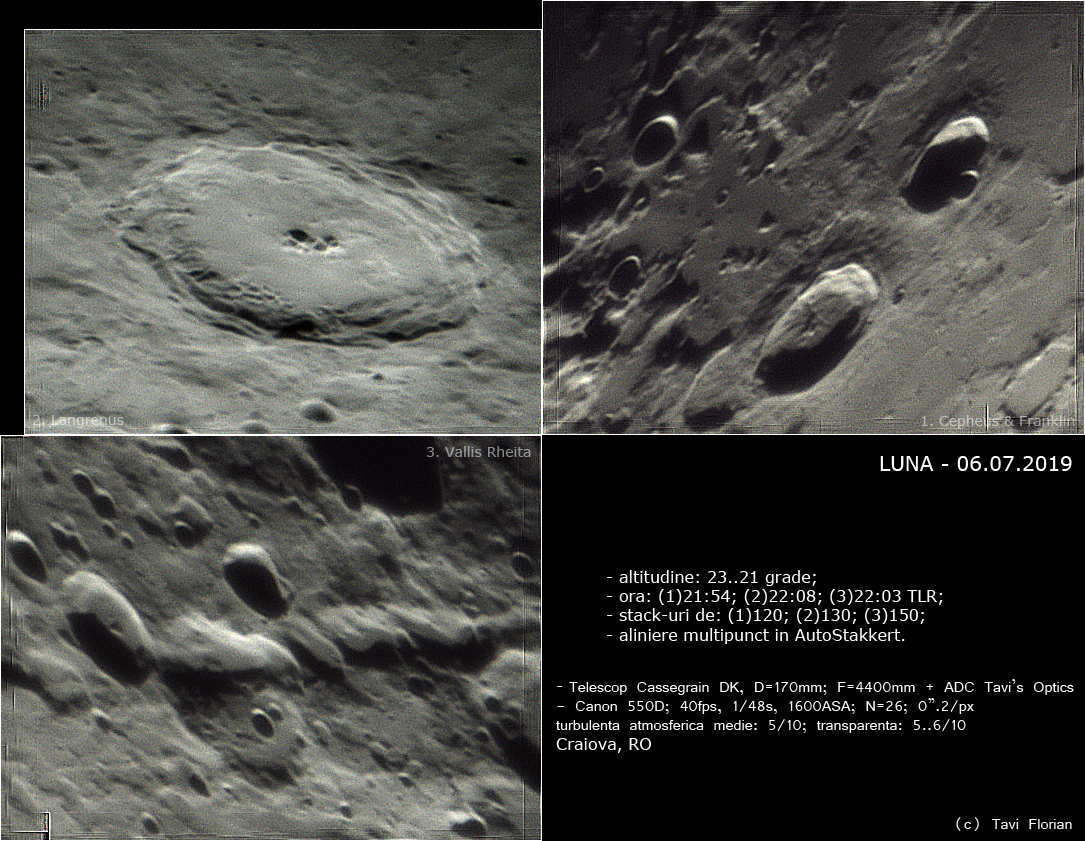 And an Yin&Yang capture from yesterday... still in average seeing, but more pleasing to me. 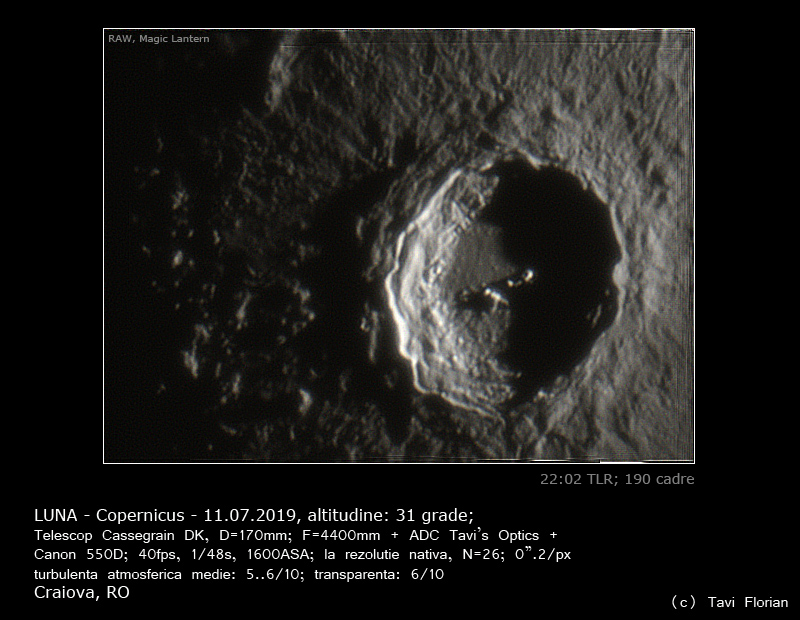 Last night I was fortunate enough to get a window of good seeing for Jupiter. About 7/10. 2000 frames stacked from a 2 minutes capture. 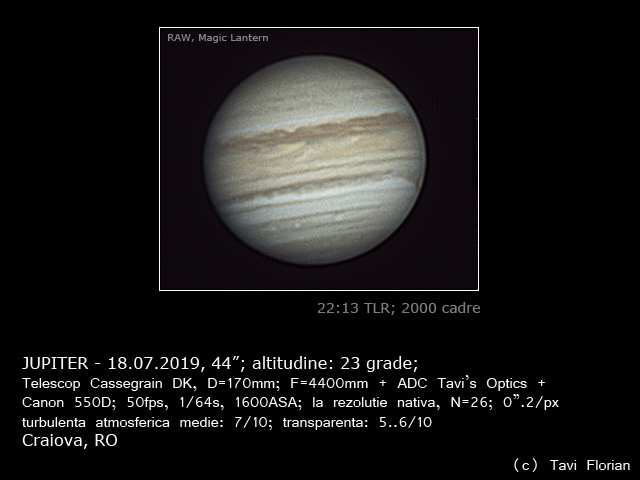 Saturn from 6th of august. The seeing was good in that evening, on twilight, when I captured the Moon through the refractors, but it deteorated about 15 minutes later such that I wasn’t able to obtain an acceptable image of Jupiter. Back again half an hour later for Saturn, when the seeing was about average. Fortunately, I can push the time window to about 5 minutes for Saturn, 2500 frames stacked. 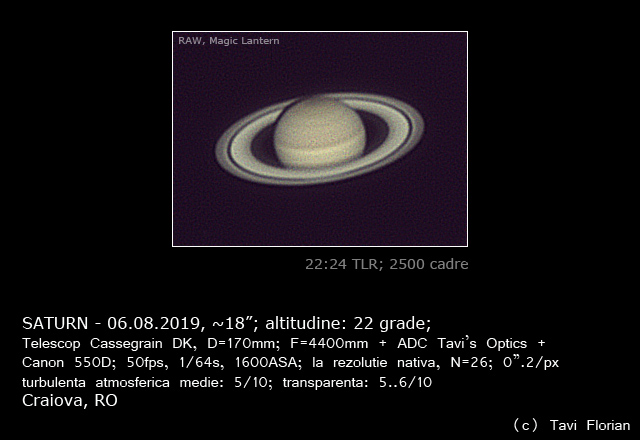 And below is Jupiter with the transit of Io, the next day. I included here the image from the same session, obtained through my D38mm, F/54.2 singlet lens refractor. The shadow being on the darker ecuatorial band, it is a hard test for the singlet. 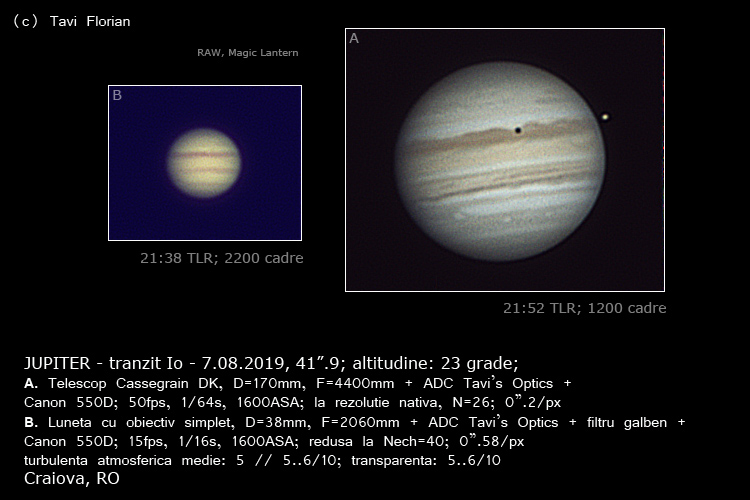 Nice images, interesting process you use.

How do you take these at 50 fps? My Canon's max speed is only 20 fps through Live view.

Nice images, interesting process you use.

How do you take these at 50 fps? My Canon's max speed is only 20 fps through Live view.

50fps only with Magic Lantern add-on. I use this firmware just in movie mode, because in "M" mode (for taking pictures) it produces some strange blinking on the LCD, and most probably it would broke the camera (and in M mode it would be useless anyway).

I gave it another try for the jovian capture from 6th of august. The one through the telescope, of course, having that with the singlet lens refractor. The seeing for this capture was below average, about 4/10. 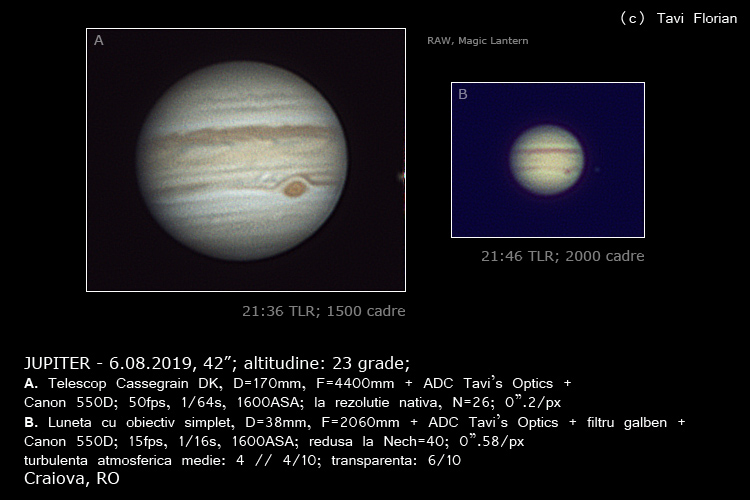 Now the Moon from 11th-08. The general seeing wasn't good enough for Jupiter, but it allowed some short moments of reasonable good clarity. And so, I was thinking to take advantage of that, by a few Moon captures. The Moon was low in the sky, at about 23 degrees. The stacked images contains around 150 frames each. The telescope is still in provisional form, without the baffle, but it is doing the job. 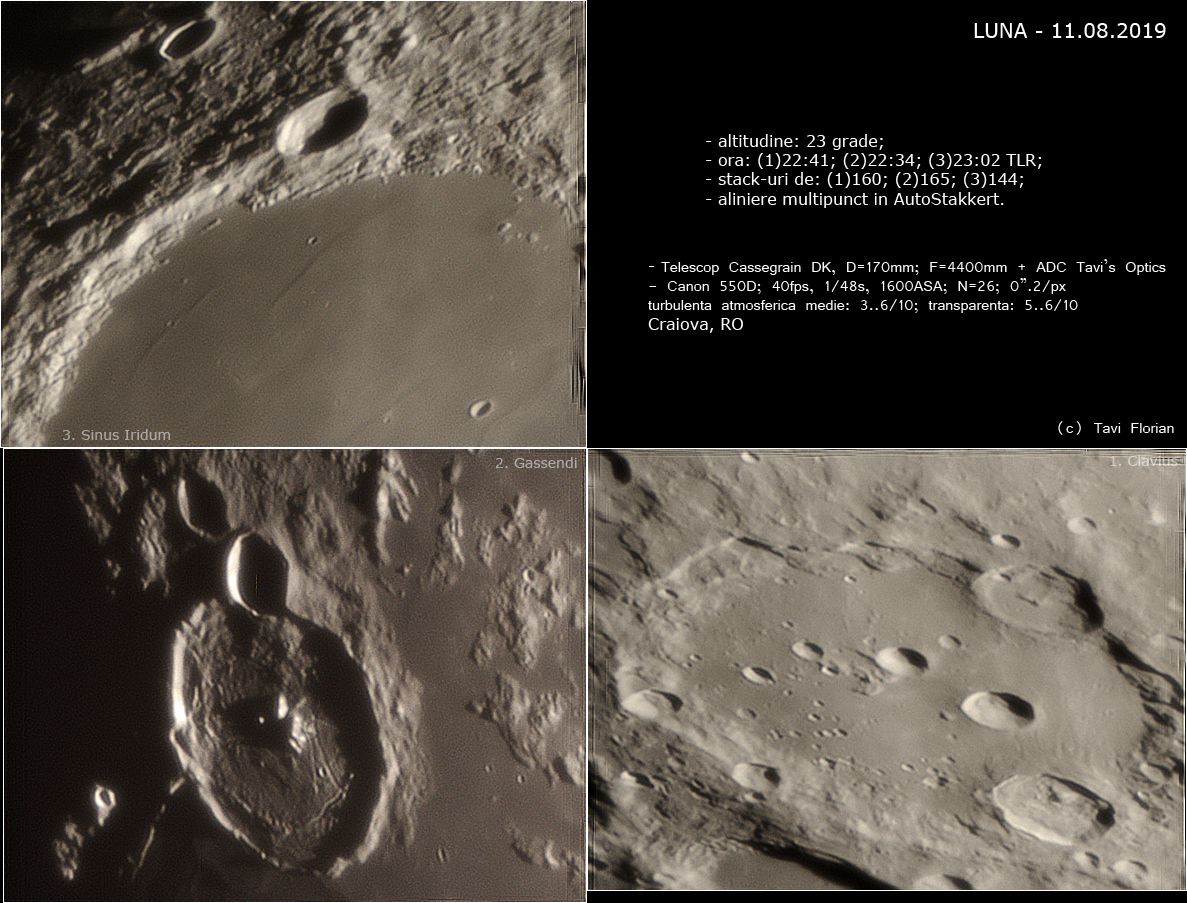 Here is a one month old picture, unposted at that time. It is from that great night of July 18th, but in twilight, when the seeing was just average; about half an hour later proved to be the best so far. I looked over it again, and it seems to be beter now, with the seeing in these days. Satelite Europa was about to go behind the disc: 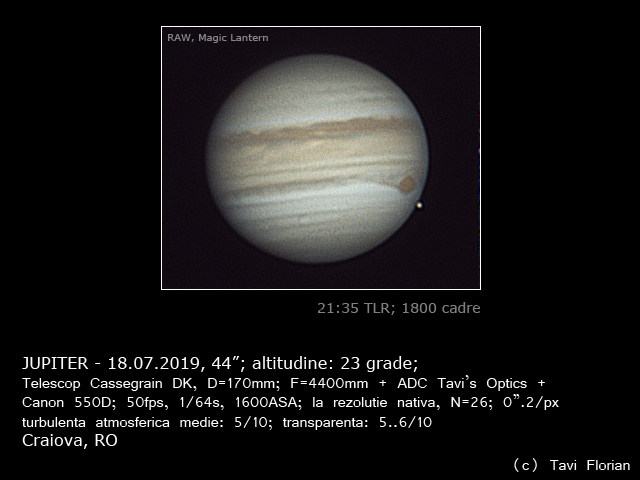 And another one from August 13th. I had to chose between two movies, and of course I had made a few versions of stacks, but in the end I decided on this one with just 712 frames stacked, being a healthier one. The general seeing was below average, but with moments of good seeing. 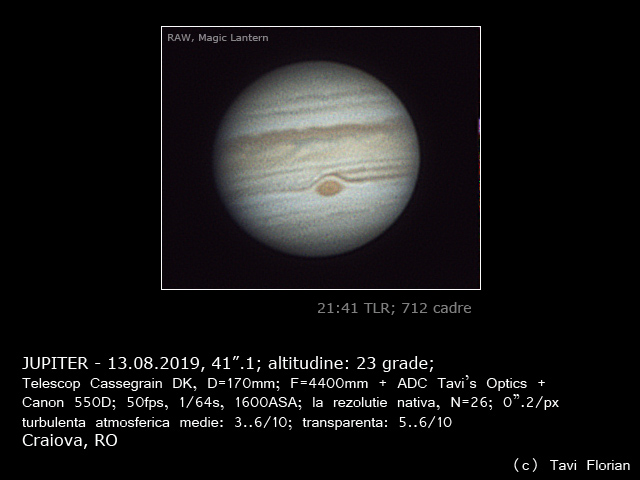 170mm and a canon 550!
Thats quite different from the typical planetary setup

Interesting stuff, thank you for sharing.

Btw, are/were you involved with CFF?

Thanks, Rouz! The DSLR is the only affordable option for me, more compact and provides quite good results.

No, I am not involved with Catalin.

This might be the end of my jovian season. One out of 3 capturing days, from 22, 23 and 24th of august. This one being from 22nd, through some cloud cover, which sometimes (like then) helps to lowering the turbulence, but with some loss due to higher noise in the individual frames. 1900 frames stacked. Ganymede's shadow was about to begin its transit over the planet's disc, but still to late for my location, when Jupiter's elevation would have been under 15 degrees... 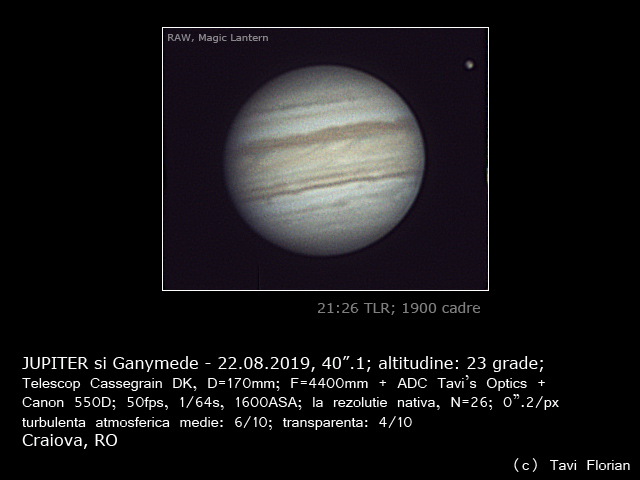 This is all good stuff for a DSLR (and then some). Thanks for posting.

Thanks for the appreciation! Yes, it seems to me as well that Ganymede is showing some detail.

And no, it wasn's over... still something left.

- From two days ago, in a bit better seeing than average: 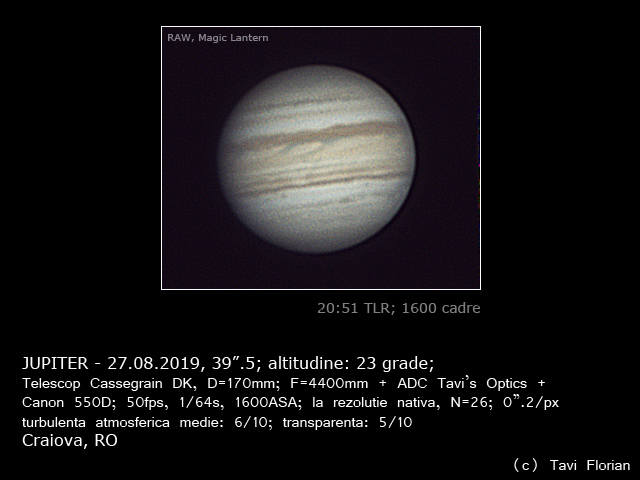 - And the transit of Europa, from this evening, in average seeing: 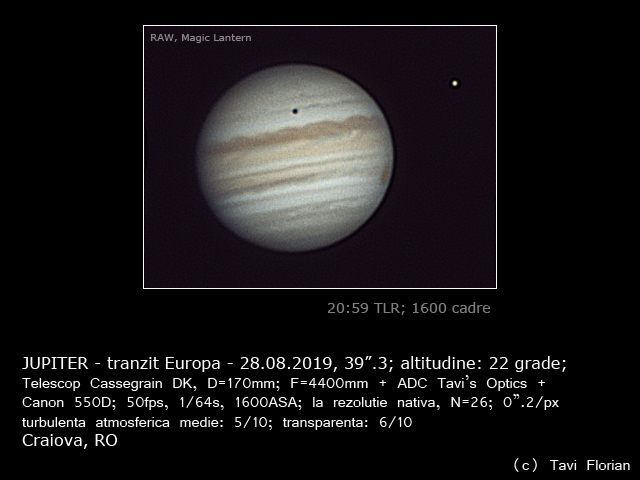 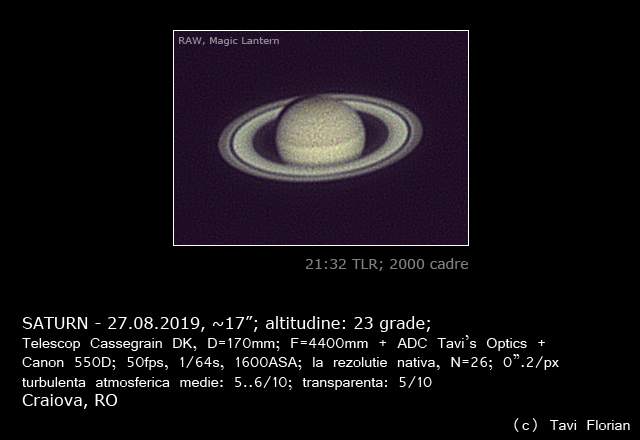 And another image of Jupiter, from yesterday. The turbulence was again of that type with large variations, but including moments of good seeing. Just 900 frames stacked: 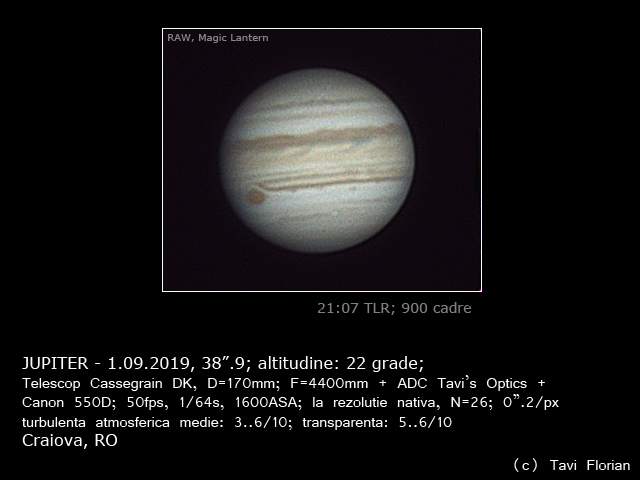