What Classic did you use to see Shoemaker-Levy 9

They were great eyepieces.

We are doing that without a comet/ asteroid impact.


When I was up at Stellafane over the weekend I saw a cool bumper sticker. It said:

And below that it said in smaller print:

”Please, just end it all now.”

Hi all, I had posted earlier. But the event really does stir up memories.

I would have been a little older than 11 and I could remember the leadup to the even with CNN constant replaying the computer generated simulations of the imapct event. And the photgraph of the string of pearls comet. Of course after the event with the stunning Hubble photos. At that time, I did not know anyone with a telescope and try as I might with my 7*35 bino, obvious I couldnt make out anything. In trinidad telescopes were a rarity, and the chances of being in the circles with those who had were slim to none. The fever to own a telescope never died.

The irony is in Trindad the seeing is like butter and later from astronomers who were in Trinidad and Tobago for the event, it was a stunning event to behold. I can only hope to witness another and be able to share the moment with my family.

Here is a single frame to give an idea of the seeing through a C9.25 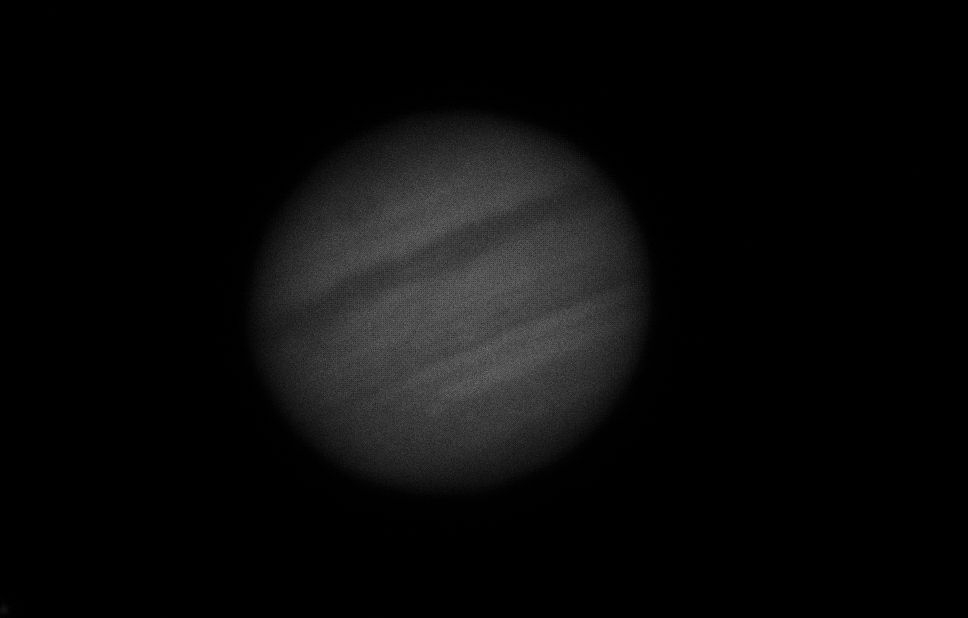 I viewed the impact sites through my 8" f/4.5 Meade 8800 on an eq mount with a drive. The detail was amazing, far more incredible than anyone had predicted or imagined if I remember correctly. I know a lot of people said it would not be visible to amateur astronomers, but does anybody recall if they ever heard of somebody saying it might appear as something like it actually did? My wife and daughter were both quite impressed to see the subsequent impacts and changes as I followed Jupiter on my patio every clear night for weeks. Those who knew me as an astronomy buff at work were also fascinated that the event was seen so well in my scope at home.

Sketched it nightly over several months.  I still cannot believe those impact scars lasted so long!

I remember setting the scope up in the back yard thinking to myself that I'd be lucky to see anything. The "G" impact was just rotating into view and it looked like a bite had been taken out of the limb. I was blown away by how large and obvious it was. Just one of many amazing things that scope has shown me since the mid 1980s.

I don't see where I responded to this Topic yet, but when I saw Tom Masterson's post, I realized that perhaps the scope I used for this event qualifies as a classic.  I also used my 6" f/8 Astro-Physics of mid-80s vintage.  At the time my primary eyepiece set consisted of a 40 mm TV Widefield, the Edmund RKEs with 2.5x Barlow, and a 6 mm Edmund volcano top ortho.  Like Tom, I expected to see, nothing, but was blown away by the view.

Sorry, I did previously post...over a month ago.  This is a long lived and interesting thread.

I don't know whether a 10" Meade Starfinder OTA on a homemade Dob mount would be any kind of a Classic, but anyway, I had that, and a 6" f/5 Dob built around Orion mirrors. The event was a spectacular sight through both of them.

Used my B&L 8001 sct which I still have and use regularly. Also viewed the impact scars with a Meade F11 achromat and a Tasco 4.5" F8 Newt both sold long ago.

I remember it well. Not expecting a whole lot I trained my Unitron Model 128 that I have had since high school on Jupiter. I was blown away at what I saw. I could clearly see the multiple black smudges...

I used my 94mm Vernonscope Brandon refractor (on a Unitron alt-az mount).  Like everyone else here, I was blown away by what I saw!

(At the time I had a sweet but rather confused little old Italian lady as my next-door neighbor.  She couldn't figure out why I was bird-watching at night.  Apparently to her, birds were the only thing in the sky that could be observed.)