Time to get back on the bus.

I have been away in the USA for most of this month so I was eager to get back outside observing as soon as possible. Luckily the Devils Orb is now waning and an opportunity to get out early before its inevitable rise was not to be missed.
After the clocks changed at the weekend, it was dark by 6pm and a quick peep outside showed that the Milky Way was already clearly visible overhead even this early in the evening. I set about getting myself and my kit ready for the walk down to the shed…
It took little time to get the dob setup and soon the roof was open and a black sky full of stars was overhead. Two star alignment of my Nexus was quickly achieved (Polaris & Scheat), I selected my Sharpless observing list in Sky Safari and nudged over into Cygnus (before it’s too late for another year).

Sh2-99/sh2-100 – Three distinct objects were seen in a triangle formation. The brightest was sh2-100 which was very easy. Sh2-99 was dimmer and smaller some distance away. A third very small but clear object was visible but its not clear what its designation is?
Sh2-101 Tulip – Not as bright as previously seen. The Tulip head was clear, I could see the brighter tip and with averted could make out a thin black lane cutting back into the tulip from the right side. I spent some time nudging through the many curving lanes of nebula that lie below sh2-101 too. This is a busy region of the sky.

Veil – I had to get in another visit. The western veil was showing the split into three parts so I knew conditions were not too bad. I surveyed all the well trodden features that I have seen many times before but trying to eek out a few extra memories maybe missed on previous occasions. I targeted the area below the eastern veil and could eek out two faint lines of nebula beyond the standard fare. But the area most memorable last night was above where I was able to see a wide expanse of wispy nebula all the way up to a bright star above, which had a clear piece of nebula to the side. Pickerings triangle was very good with three clear black hole sections within and the thin thread showed the two separate intertwined lanes twisting their way up to the top section.

Sh2-110 – Very hard. I could see an elongated circular thin black lane. There seemed to be a black “tail” section underneath and a darker black central hole in a triangular shape. The actual nebulosity was hard to see. I could at best “sense it” outside the boundaries of the black lanes.
Sh2-111 – Another very hard one. I could just about see a large more oblong shape (it seemed to be flat on top and more curved at the bottom). The stars seemed to be clearing black sections in the area within.

Sh2-114/sh2-113 Flying Dragon – I’ve not had much success with this object and NV. I may have finally got somewhere last night though. I sketched out what looked like an upside-down “pear”. The pear had a square corner top left and then headed down in a teardrop like shape to a point at the bottom.  At one point I came across a small faint fuzzy patch that seemed to appear more as a “curve” with some time at the eyepiece. Looking at images of the flying dragon, I can see these features in there so maybe I was on the right track!
Sh2-112 – A favourite of mine. The bright “C on top of a stick” and the thick black lane running through the nebula make this quite eye catching.
Sh2-115 – A wonderful sight, filling the FOV. Thick curvy shapes catch your eye as you nudge around. Lovely.
Sh2-149/sh2-152/sh2-153 – All (almost) in the same FOV. Sh2-152 & sh2-153 sitting side by side “little & large” then just out of view the faint but clear sh2-149. Sh2-153 is small but very bright.

Minkowski 2-51 – What! Never heard of Minkowski? (Neither had I). Whilst nudging around came upon a planetary nebula and luckily Sky Safari had it logged. My first Minkowski… (I just looked it up and there are 209 of them!)

Sh2-173 The Mask – Large patch including a bright star and a decent size black area. Hints of a second black area just above the first black area.

Pacman – Large and bright nebula. The “Angel” can be clearly seen. Lovely black “cactus” to the side of the Angel.
NGC896 – The “mole” fills the FOV. This is a great bright nebula and it really does look like the head of a mole!
Sh2-174 – The moon is rising so I head over to Polaris. What! There ain’t no nebula near Polaris… (That’s what I thought too, but what about sh2-174). It is a faint but decent sized patch found over near Polaris!
CED214 – Back to CED214 for some lush bright nebula that seems to have a face hidden within it to me.
Sh2-207 – Medium sized faint circular patch, easily seen.
Sh2-208 – A tiny, tiny patch in the same FOV as sh2-207. So tiny that I missed it on my last visit to sh2-207!

Beaten by the Moon and the cold.

By now the sky was brightening significantly, my toes were cold and I was hungry so I decided to call it a night and looked forward with hope as I thought of the now steady declining moon over the coming weeks.

The dob was covered in Ice and the shed thermometer was reading -2 degrees C.

Thoughts of the observer.

I was out with the 135mm telephoto on my NV eyepiece Saturday night going after targets too big for my Takahashi Epsilon. And sure enough, one of them was Sh 2-174.

It was incredible to think that in 40+ years of using telescopes and the key role Polaris plays in that (both equatorial and alt-az DSC alignment) I never even suspected it was there!

But sure enough - it is! Not that it is bright - even with NV it took averted vision. Moving on and off the target several times confirmed it. It also took a steady mount (photo attached). It would have been an even harder catch hand-held.

The Sharpless Catalog has been a lot of fun. So far my count is up to 93 - all from Bortle 5/6 skies. They are not all bright and easy though. And like open clusters, the size range is large. More than one optical instrument is required for the quest.

ID'ing them can be problematic too. For example, the southeastern portion of Cepheus near Delta. The largest is Sh 2-134, but superimposed on them is Sh 2-139 and Sh 2-132. It is easy to see -132 and -139 as bright condensations laying on a glowing field. The glow is -134 but it is hard to determine where it really ends. It takes some blinking on my H-alpha filter. (Somewhat tedious since I don't use a filter drawer or wheel.)

SkySafari is not always very helpful (or accurate), using an image intensifier quickly makes that clear. For example, most nebula are depicted with the diamond symbol instead of the physical outline. The "Download DSS Image" helps in some cases.

Uranometria has phenomenal cartography, but it was designed well before NV started to be used for astronomy, and only has a limited number of nebula plotted.

Bracken's "The Astrophotography Sky Atlas" is helpful. For example, it plots the outline of the large Sh 2-134. But smaller "overlay" nebula are given as -135 and -138!

I suppose the ID challenge adds to the "fun". In any event, I sure am enjoying the views! 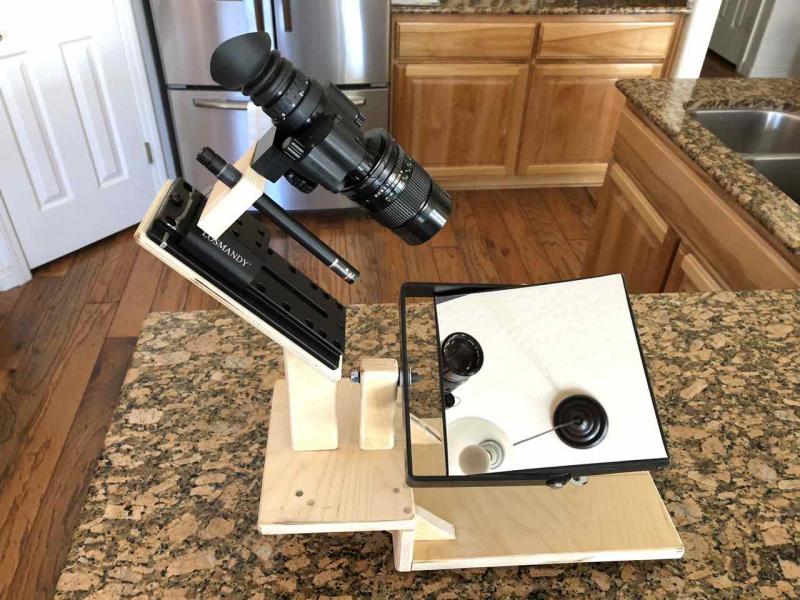 I will try for sh2-178 next time I get the Borg 107 out, but even then Polaris is not well placed from my patio so it may not happen. I will definitely try at x1 next time out.

Either way I need to try while the sky is dark, looking towards Polaris only seems to occur to me once the Moon is interfering with play!

You need some better boots! Cold will only reduce the ENI figure... so the colder the better... if the observer and dew bands can stand it! Another good session, working through the catalogue.
Peter

I will try for sh2-178 next time I get the Borg 107 out, but even then Polaris is not well placed from my patio so it may not happen. I will definitely try at x1 next time out.

Either way I need to try while the sky is dark, looking towards Polaris only seems to occur to me once the Moon is interfering with play!

I suppose the ID challenge adds to the "fun". In any event, I sure am enjoying the views!

Sorry, what lens and adapter is it at the front of the viewer? 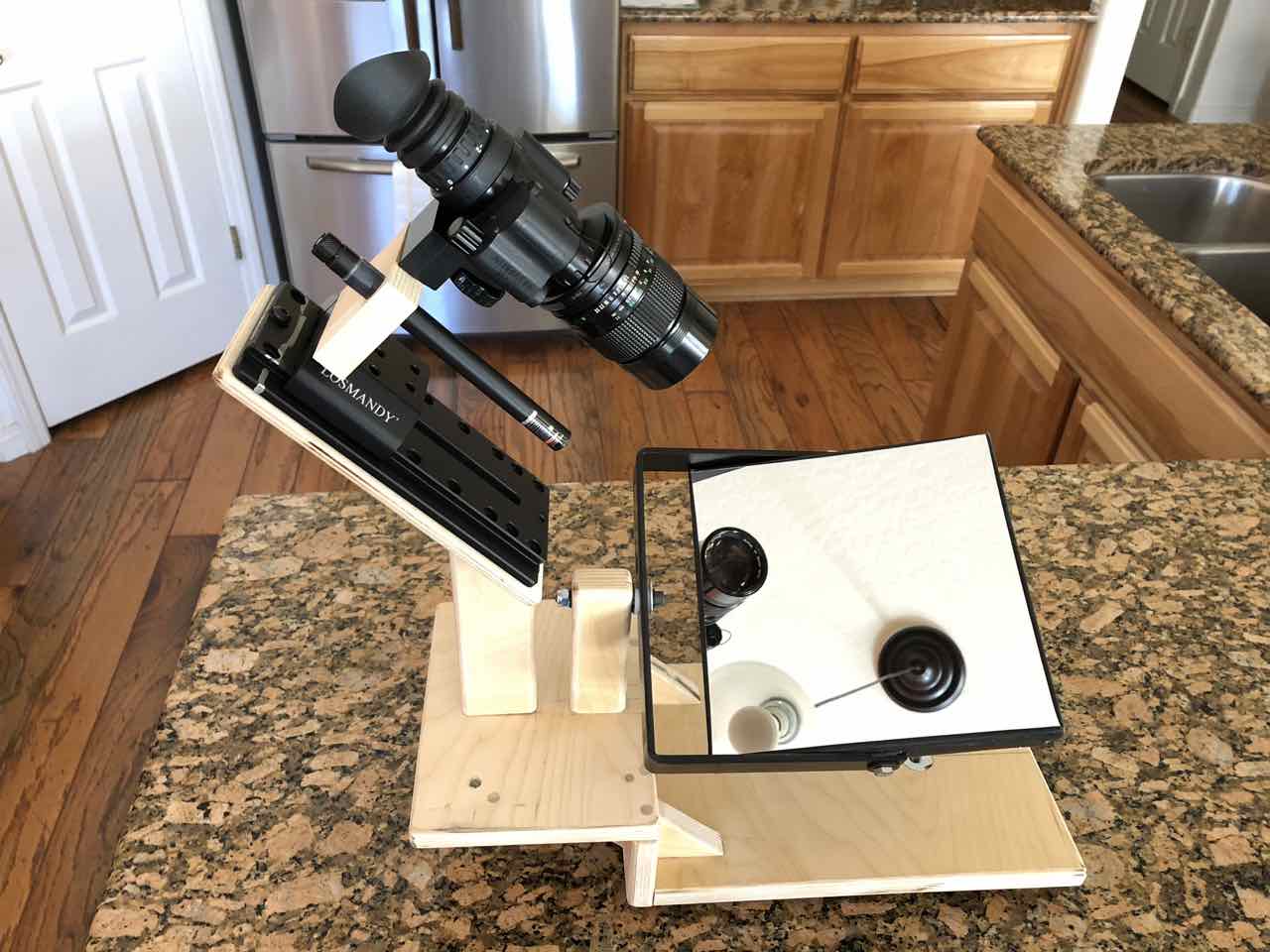 From Right to Left:

The key part being the telephoto to C-mount adapter. They are widely available for different lens mount systems (Canon, Nikon, etc), allowing use of your favorite telephoto lens(es).

The "C" in Mod 3C means C-mount lens system. The objective lens on the monocular threads off and can be replaced with items such as another C-mount lens, a telephoto adapter, or nosepiece to use in a telescope focuser.

That's a front-surfaced mirror?  If so, what vendor did you use?

It was three bolts and wing nuts on the the back, presumably for fine aim adjustment of the laser it is intended for. Useless for astronomy application, just trim them down with a hack saw. Can't eliminate them entirely as they hold the mirror mount plate to the rest of the assembly.

You can get first surface mirrors cheaper of course, but the included yoke assembly saved me the time and effort of having to make my own.