What did you see last night in your binoculars? (Part 3)

Last night, I viewed the waxing crescent moon in my Oberwerk 15x70 Deluxe. The moon was outstandingly sharp in these!!

Had a great session last night. Got to use the parallelogram I bought off of Terra for the first time, along with a zero-gravity chair. What can I say? It was the most comfortable, and thus most relaxing, time I’ve had gazing up at the heavens.

Session began by turning my OB 20x65EDs to Lyra and it’s doubles, the Ring Nebula was tiny but visible. Then on to M31, which filled the FOV, M33, then the double cluster in Perseus. Was my first time coming across this star field and OMG my breath was taken away. The Perseus double cluster is easily my favorite DSO. The parallelogram mount made glassing so comfortable I didn’t realize I had spent over an hour on the double cluster alone.

My game has been changed. I had been thinking I was going to purchase a 70mm BT as my next tool, but now I’m leaning more towards a higher end binocular like a Maven to use with the parallelogram. Then again, my wants tend to sway here and there so I’ll probably have my eye on something else next week!

Last night, I viewed the waxing crescent moon in my Oberwerk 15x70 Deluxe. The moon was outstandingly sharp in these!!

Agreed!  I got my first peek tonight too.

Not an observation report, but perhaps a path to better observations in the future.  I decided to pull out my old Orion Paragon to try with the 15x70 Oberwerk's.  I'm going to start doing the AL Lunar program and I discovered last evening that it's pretty difficult to do it hand held.  This is my first baby steps toward a parallelogram. 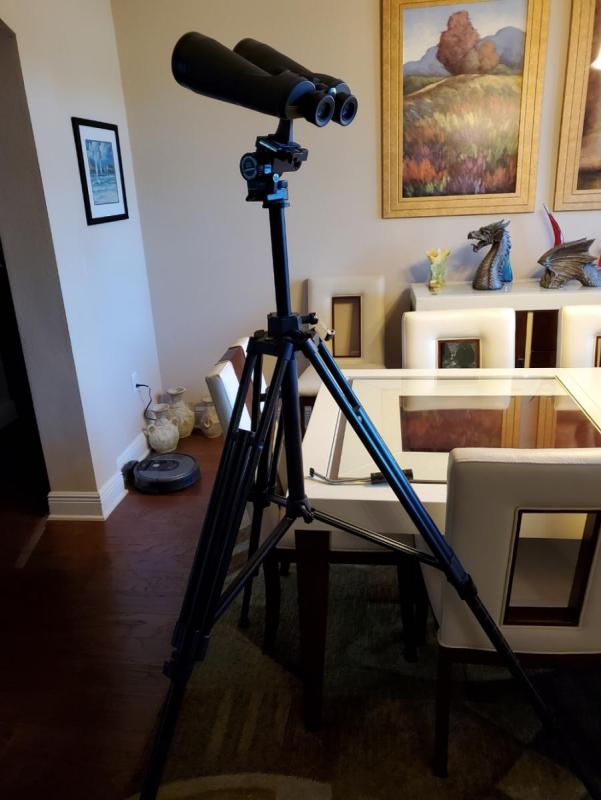 Last night it was excellent seeing for my start on the AL Luna project.  The Paragon makes the whole project doable - I can't imagine trying this without something like this.  I never realized before that I could actually sit behind the tripod with my adjustable height chair - why would I have assumed I'd need to stand all evening?

The AL project has you viewing most of the larger Maria naked eye.  I was able to more or less see them when I placed an ND filter over one eye to cut the glare, but Crisium is impossible I think (or is it just glare from my glasses).  Anyway, the 15x70s make easy work of them, and they highlight so many of the brightness variations adjacent to many of them (I have never noticed Palus Somnii before and it's so obvious in the binoculars).

I was able to view all the craters up to about day 7 as the terminator was right at Cassini.  I find myself looking forward to the moon getting brighter this month - I never want that.

August and September in northeast Florida have been cloudy almost every night.  However, the skies have been beautifully clear since hurricane Ian moved on.  We were very fortunate here.  The worst of the storm passed to the south and then east of us but caused some bad coastal erosion and a lot of flooding in lower lying areas.  I pulled lower back muscles doing hurricane prep Thursday but a group was going last night to a dark sky site in the Osceola National Forest.  I packed light - zero gravity chair, 15X70 Oberwerk LE binoculars and ibuprofen - no heavy telescope and mount.  I can handhold the 15X70 LE's quite well.  The moon set before midnight but dropped below the tree line much earlier.  The tree line did seem thinner since the storm.  The sky was beautiful - the Milky Way showing nicely even through the moonshine.  The storm really cleaned the air with lower humidity, cooler air dropping in behind it.  It had been much earlier in the year since I needed a hoodie at night.

It was indeed a great night and I did not notice any back pain for a while.  I did use my seat warmer on the way home.  Felt real good on my back.

Sunday night, I viewed the moon with my Oberwerk 10x42 ED and was rewarded with outstanding, razor sharp and false color free views!!

Last night, as the air wasn't too cold, so I went outside with my Omegon 15x70 to watch a little... I planned to observe for a quarter of an hour or so...

Unfortunately here in Kostanay city / Kazakhstan we have some light pollution.

Jupiter with four moons were nice. Saturn, Mars not so impressing in binocular - of course.

Then I "visited" the Plejades, h & chi Persei, some more open star clusters as there were NGC 653 and 654 in Cassiopeia, M 103, M36 to M38 in Auriga. This northern region was little darker, as most light pollution and dust seems to be to the south...

M27 as faint nebula, Also M57 in Lyra I could probably see as a very faint small object.

At the end I "visited" some doubles: e1,e2 Lyrae. d1,d2 Lyrae. beta Lyrae and his double, Albireo.

At last, I stayed outside for more than an hour, much longer as I had planned before, but the night air and the stars in binocular were so impressing, that I could't stop earlier!

Sunday night, I viewed the moon with my Oberwerk 10x42 ED and was rewarded with outstanding, razor sharp and false color free views!!

Cool to hear the OB 10x42 ed works good for you on night sky. It or the 8x42 are on my future wish list for a comfortable hand held binocular.

I looked at a grand total of one celestial object on Thursday evening, namely the cloud-obscured waxing crescent Moon, with my Canon 15x50 IS.

...with my 15x70 Paragon mounted little beauty, I marveled at Orion's belt stars, and the Orion nebula while the coffee was brewing early this morning; 15x, for me, seems to be the perfect perspective for a closer look into Orion!

Monday night, I again viewed the moon with my Oberwerk 10x42 ED binoculars. My 8x56LW are due to arrive on Tuesday and I'll be using them to view our moon. The forecast is looking favorable the next couple of nights for observing so I'll be outside looking up!!

...with my 15x70 Paragon mounted little beauty, I marveled at Orion's belt stars, and the Orion nebula while the coffee was brewing early this morning; 15x, for me, seems to be the perfect perspective for a closer look into Orion!

I think to try this tomorrow morning!

I think to try this tomorrow morning!

I wholeheartedly agree. Shall try this tomorrow morning as well!